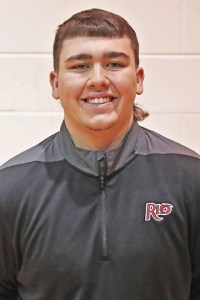 The senior utility player and pitcher for the Ironton Fighting Tigers has given Rio Grande plenty of options for next season after signing a letter of intent on Tuesday.

Rio Grande, 13-year veteran head coach and recent URG Hall of Fame inductee Brad Warnimont was happy to land the versatile Bias he plans to see as a pitcher and utility player.

“We think he’s a dual player for us. We think he can do both at our level, we just need to figure out where. With two-way people, we work with them in the bullpen arms first, depending on where they are in the lineup That’s the most important thing to see where it fits,” Warnimont said.

“We think his breaking ball is now good enough to get us out of the bullpen, so we’re excited about that. Then we’ll look at his bat and the depth map and move on from there.”

Ironton head coach Travis Wylie played for legendary coach Don Schaly at Marietta College and thinks Bias has the ability to hit the next level.

Offensively he swings a good bat and is a gal-to-gap man. He is a high character teammate who played a lot of catch for us which was a new position for him and he did a great job,” said Wylie.

Bias caught for Ironton last season – a position he has never played before – and played some infield, including third base during his summer ball.

Bias said Rio Grande is the right place for him to develop his skills and play in multiple positions.

“I love it. Utility players in college, there’s so much you can do. I can do anything,” Bias said.

“Rio is just a nice little school and I thought it would be something for me. They’re big boys down there and they know what to do. The condition and the workouts are great. It’s a good program.”

Bias said he is willing to play wherever he is needed, but given the choice it would be third base.

“I just like being the protagonist,” Bias said. “If you’re in the hot corner you’ll get (the ball) or you’ll get hurt. It’s a mentality. I like the mentality I have to break it. I’d like to start on the first day. That’s my goal.”

The biggest adjustment usually comes to the plate with better, faster pitching on a daily basis, unlike high school where you can occasionally see a hard-throwing pitcher in the 90-mph range. Bias doesn’t seem too concerned.

Warnimont said Bias’ playing time will depend on his adjustment to college level.

“Once they get used to the speed of the college game, you start taking those steps and the game starts to slow down for you,” Warnimont said.

Bias has been playing baseball since he was 5 years old, although he also wrestled and played golf. But baseball has always been his favorite sport.

With his college future secured, Bias said he can now focus on the upcoming high school season.

“It is now a great relief to do this so early. I think we will have a great year and hopefully take home another OVC Championship and maybe more,” said Prejudice.

Wylie said Bias’ love of the game is one of the reasons he has become a success and that his high character as a player with a great work ethic has allowed him to overcome adversity just to play the game.

“Nate is a solid kid who has been through a lot of adversity in high school,” Wylie said, noting that Bias missed his sophomore year because of COVID and hurt his elbow as a freshman.

“His junior year was his first high school baseball season. He’s always kept up with his teammates and worked to get back to playing, so that just tells you what kind of person he is.”

Bias plans to study in business.