Kim Yeon-koung reacts during the bronze medal match against Serbia at the 2020 Tokyo Olympics on August 2, 2021 at the Ariake Arena in Tokyo. [YONHAP]

Korean volleyball star Kim Yeon-koung was named the Best Player of 2021 by Volleyball World in recognition of her role in leading Korea to fourth place at the 2020 Tokyo Olympics and for her efforts in both the Korean and the Chinese league.

“2021 was a milestone year for Kim,” according to the article on the website of Volleyball World, a media organization affiliated with the Federation Internationale de Volleyball (FIVB). “It was the year she retired from the national team, seventeen seasons after making her debut for Korea in 2005.

“It was the year she led her country through their third consecutive Olympic entry and to her second Olympic final four. It was the year her social media followers on both Instagram and YouTube reached the one million mark.” 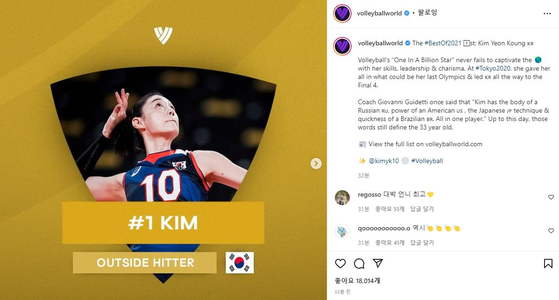 Volleyball World has named Kim Yeon-koung as the player of 2021 on Sunday. [SCREEN CAPTURE]

Last year was a packed year for Kim. After playing her second season with the Incheon Heungkuk Life Pink Spiders from October 2020 to April last year, Kim played the 2021 FIVB Volleyball Nations League from May to July, then flew to Tokyo to captain Korea for the third time. in the Olympic games. withdrew from the national team and moved to Chinese club Shanghai Ubest.

Kim first wore the Taeguk mark in 2004 at the Asian Junior Women’s Volleyball Championship. Then, in 2005, while still a student at Suwon Hanil Girls High School, Kim was called up to her first senior game at the FIVB Volleyball World Grand Champions Cup.

The rest is history. Kim has appeared with the national team at three Olympics, four Asian Games and three World Championships, leading it in many of those tournaments.

International events aside, it quickly became apparent that Kim is arguably the greatest volleyball player Korea has ever produced, and her career has led her to play in much more competitive leagues in China and Turkey. The more she learned to play for powerful teams around the world, the more Kim came back to the Korean volleyball team.

Last year, at the 2021 Volleyball Nations League, Kim scored a total of 196 points. And although Korea finished in 15th place, the national team seemed to have a good boost for the Olympics, as Team Korea’s performance at the Tokyo Games told a different story. 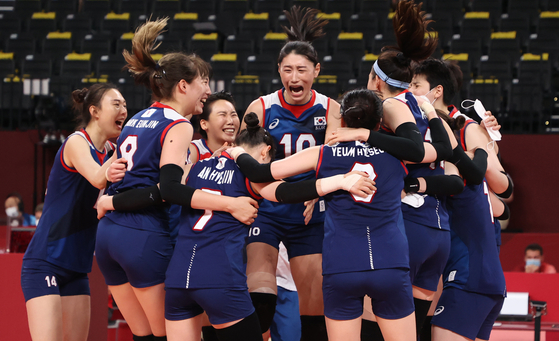 Kim Yeon-koung, center, celebrates with the team after beating Japan in the preliminary round of women’s volleyball. A match at the 2020 Olympics on July 31, 2021 at the Ariake Arena in Tokyo. With the win, Korea earned its place in the quarterfinals. [JOINT PRESS CORPS]

On the big stage, Team Korea stunned fans with a fourth-place finish, despite entering the tournament as an underdog.

Korea entered the Games and was seen as an underdog with little chance of reaching the semifinals. Not only was Korea ranked 13th in the world, the third lowest-ranked team in the Olympics, but it also came back from a disappointing penultimate finish in the Volleyball Nations League in June.

Kim and the 11 other members of the Korean squad quickly became fan favorites and battled their way through eight games against mostly higher-ranked teams to reach the bronze medal match. The team came home with no cutlery, but no doubt in the minds of the fans that they had given everything they had.

And of course there was Captain Kim Yeon-koung, who somehow could always be everywhere.

Not only was Kim the second best goalscorer of the entire Games after Tijana Boskovic of Serbia, but Kim also became the first player to score more than 30 points in four games at the Olympics. At the same time, the numbers show that it has been a long journey, especially for her, as she has played six Olympic matches and only managed to rest in two: the preliminary matches against Brazil and Serbia, where she only sat out the third set.

After the Games, Kim officially retired from the national team on August 12, 2021, having devoted the best part of 20 years to the Korean national team, but Kim’s exceptional achievements carried through to her stint in China, where she topped the scoreboard. led in most of Shanghai Bright Ubest matches. Shanghai finished third in the Chinese Volleyball Super League season.

In addition to her achievements, Kim’s popularity last year made her the first volleyball player to have more than a million subscribers to her YouTube channel and, according to some reports, the most-tweeted female athlete in the world in 2021.