Vonderau and Mast conquer 13 & Under titles

“Last year was practice,” said Ra Hanna of On The Wire Creative Media and tour director of the Junior International Championships sponsored by Viking Cues, which kicked off its second season this past weekend (January 14-16). During a snow storm.

“The practice is now over.”

The weather had an impact that forced Hanna to cut it short. His concerns for the safety of his juniors and the family members who had helped them to Roanoke, VA led to the game being squeezed into two days instead of three in all five JIC divisions. That same weather led to cancellations of flights that detained Hanna in Roanoke until Wednesday.

“The safety of the players and their families was paramount,” he said, noting that a cycle of soft snow and freezing temperatures had made the roads “like an ice rink”.

The event, now officially known as the Junior International Championships sponsored by Viking Cues, drew a total of just over 100 participants across the five divisions (with some crossovers between divisions) to Wolf’s Den in Roanoke, VA. Hanna had expected more and was convinced that in the absence of the weather… been Lake. 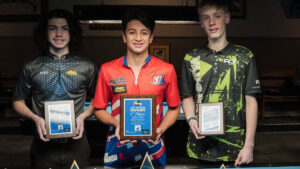 Landon Hollingsworth and Joey Tate returned to compete in the second season of the JIC and were the winner and runner-up of the 2021 18 & Under Championship finals.st and 2nd in Season 2/Stop #1’s Pro Am Division with 31 entrants. They didn’t do very well in the 18 & Under division finishing 4e (Hollingsworth) and equal for 17e place (Tate). The 18 & Under Boys division was won by Lazaro Martinez, who went undefeated beating Niko Konkel, who had lost to him in the hot seat match and returned from a win over Garrett Vaughan in the semi-finals, to take a second to be defeated.

In the absence of 2021’s 18 and Under Girls champion Tatum Cutting (who has turned 19), the young woman she eliminated in that division’s championship final in October, Kennedy Meyman, stepped “straight back on the horse,” so speak. Meyman lost her opening match in the 11-entry, 2022 division opener, but gathered to win six in a row, then beat Courtney Hairfield in the final.

The 13 & Under divisions, which attracted 17 boys and 9 girls, saw the emergence of a new(er) rivalry and the renewal of an old one. Eddie Vondereau and Grayson Vaughan competed twice for the boys title; hot seat and final. Vonderau defeated Vaughan both times to claim that title. 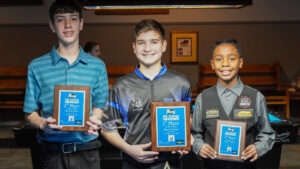 And in the 13 & Under Girls division, it was legendary JIC rivals, Sofia Mast and Skylar Hess, who, like Vonderau and Vaughan, competed twice for the division title of the event. After each of them got a bye in the opening round of the game, they met in what was the first match for both of them. They came in in a game of double hill, but it was Hess who moved forward to send Mast to the loss 7-5. Mast flew through her first three rounds on the losing side with a total score of 21-4. In the quarterfinals that followed, Noelle Tate (Joey’s sister) fought a fight that earned her more rackets against Mast than her first three losing opponents combined. Mast advanced to the semifinals 7-5, where she defeated Savannah Easton and appeared 7-4 in her first JIC event.

“That was one of the surprises of the event,” Hannah said. “(Easton) beat some of the top girls in that division (Franki Spain, Raygen Wilson & Skylynn Elliott) to finish third in her first event.”

So again, it was Mast and Hess battling it out against each other; a matchup that took place in the quarterfinals of the 18 & Under Girls Championship last October. Mast dominated the extended race-to-9, winning it 9-2 to claim her first, and probably not her last, JIC title in 2022.

There are differences in this second JIC season, but they involve some minor additions and a level of expectation nurtured by Hanna and the people who helped him last year and still do this year. Among them are Kory and Trena Wolford, owners of Wolf’s Den. 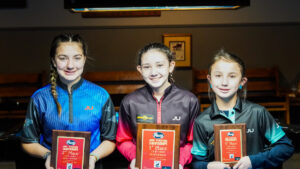 Viking Cues has joined as a sponsor and as such will contribute to prizes, a scholarship awarded to the player receiving the Brendan Crockett Sportsmanship Award from the tour, aspects of the tour’s day-to-day operations and, if applicable, unspecified equipment . Hanna noted that Dynaspheres “performed” as did Mike Littman with Littman Lights. This year’s tour will partner with DigitalPool, which will feature what Hanna described as a “customized environment” with anticipated brackets, updated division rankings, player profiles and live scores.

“The players are going to do the live scores themselves from their smartphones,” said Hanna. “They will upload scores to that site in real time.”

“We’re looking at a shot clock on the big tables,” he added of another embellishment they’ll be considering bringing to the tables, literally. “Model the atmosphere after that of the professionals so that (the players) will not be ‘deer in the headlights’ in the world.”

“We are also going to sponsor a number of players who go to Pro events throughout the year,” he added. “It is up to the player to decide which Pro event to attend, be it Turning Stone or the Super Billiards Expo. (The tour) will be in April and we’re going to send a nice little contingent. With four of the divisions, a representative from each division would be nice.”

The plan is to not only give the youth players the chance to compete all year round, but also to give them the tools they need to battle the increasingly tough competition in what could well be tough locations.

“I don’t want them to be complacent,” Hanna said. “I want them to know that someone will always come for you and things won’t always be perfect; not the balls, not the tables, not the general environment.”

“I want to go to battle with this group,” he added. “The composition of this group is the right combination to succeed; we’ve got everything – gunslingers, mercenaries, the silent types. We are going to make some noise this year.”

The Junior International Championships, sponsored by Viking Cues, will host the second stop of the second season on the weekend of February 11-13. It will be hosted by Diamond Billiards in Cape Coral, FL.