Each time, the same heartbreaking message flashes: Call failed. Malakai Fekitoa tries to call two different contacts – his mother and one of his six brothers – but there is not even a dial tone.

No answers. No guarantees that his family, who lives thousands of miles away in a small Tongan village, is safe and sound. Just the sound of silence that sends a shiver down my spine.

The small cluster of islands, tucked away in the Pacific Ocean, has been cut off from the outside world since last weekend. A submarine volcano caused the largest tsunami in decades and its impact on families is hard to fathom. The telecommunications cable running under the ocean floor has been destroyed and Fekitoa has not heard from his family since. 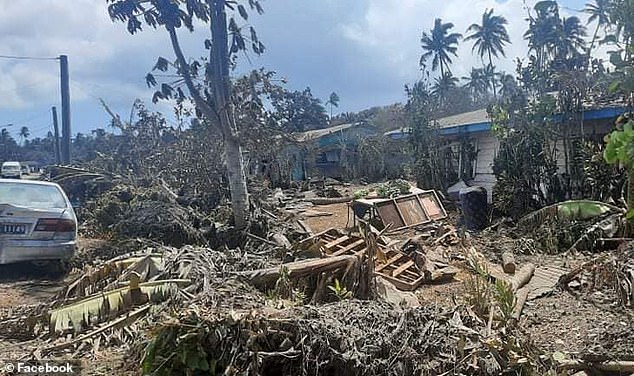 “The last time I spoke to my mother was the Monday before the volcano erupted,” he says. “She was with my brother and my cousins, making Ta’ovala mats (traditional clothing) that they could take to school. She was in a hurry because the school said you can’t buy them in stores anymore, so they had to make them the traditional way.

‘Two or three days later I called to pay the children’s school fees, but there was no answer. That’s normal on my island. Sometimes you don’t have calling credit and the calls just don’t come through. I thought nothing of it, but then I saw the news of the volcano last Saturday.

“There was no warning. I was shocked. All communication had gone down. On Thursday, one of the phone companies managed to get a network for some overseas calls, but I tried and had no luck with my mom and brothers. Most of my family are on one of the smaller islands, Ha’apai, so it will take longer to get the network back there.

“I’ve read the news and I think they’re all right because there’s been no mention of my village being affected. I’m sure they are all good. The time difference makes it more difficult. Every time I get the chance I try to call them. After breakfast, after meetings, before training, after training, just before you got here. Nothing. 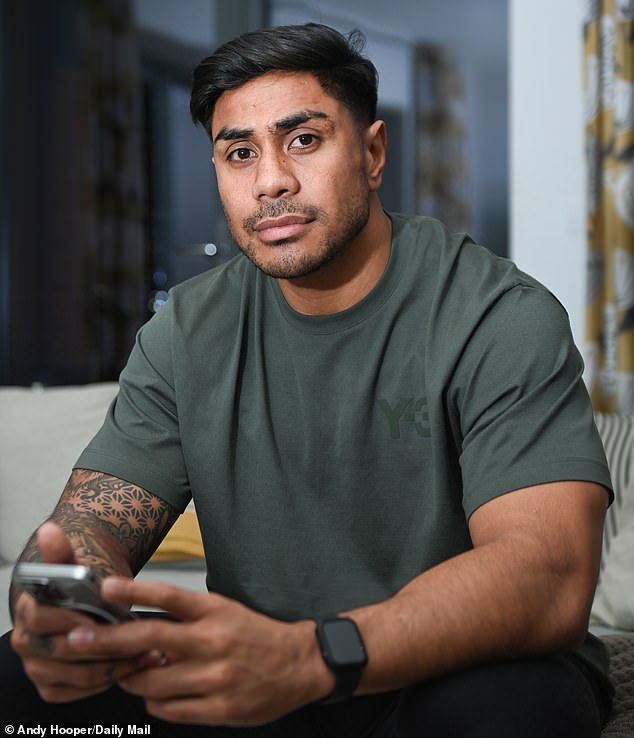 Fekitoa has heard of his sister, but is still waiting to talk to his mother and brothers

‘Every day I try to get in touch. Friday evening I managed to reach my sister on the main island. She’s OK so that was a big relief, but she hasn’t heard from our mother or brothers either.

‘She spoke of the enormous shock and described how many houses on the edge of the island have disappeared. I asked about the situation with the help and she said it is going slow because they are going to the other islands first.

“It was just good to hear her voice. Luck. Not knowing was the hardest part. Everyone around the world is praying for Tonga this week.”

Fekitoa scrolls through news articles from around the world in search of answers. The images filtering through it are deeply disturbing. Islands have been swept away, villages have been covered in ash and warnings have been issued about toxic sulphur. There’s been some reassurance lately, with foreign aid arriving and survivors sharing their stories, but Fekitoa can only wait and see.

“The worst will be in a month. Lots of stuff coming in this week. A big, big ship from Australia. Money from Japan, New Zealand. I lived there during a cyclone and it took a few years to get things going again. Those times are tough. 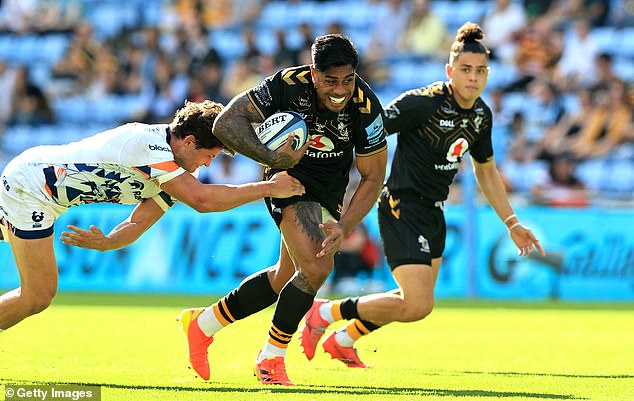 Fekitoa has raised £45,000 so far and plans to use the money to provide food

“My brother was one of the main contractors for the rebuilding of the island and it took almost a year. In Tonga, everyone is working together to get back on their feet. When one house is hit harder than another, everyone gathers. In the coming months, the community will come together, help buy some wood or whatever. That’s how they live. Me and my brothers are in a position to help our family, but others are not so lucky.”

Back at his apartment at Leamington Spa, more than 10,000 miles from Ha’apai, memories of Tonga hang all over the living room. The country’s shield is attached to the wall, alongside a traditional dress and pictures of him collecting coconuts with some of his 14 siblings. They paint a picture of a heavenly oasis, a stark contrast to today’s reality.

‘Our island is beautiful, calm, peaceful, friendly. One road, a few cars… you might see one or two an hour. There is no stress in Tonga. Two or three police officers, a few doctors, a few people with shops and that’s it. My mother grows flowers and runs the only convenience store in the village. My sister has set up the only ice cream parlor on the island.

‘People catch fish, grow vegetables. They live off the land and the sea. The islands are all surrounded by coral so that the big dangerous fish cannot get through. No sharks. It’s safe. All the islands have this dark water and then the thin blue. I would follow the older boys with a spear to catch the fish.

‘We used to climb palm trees to collect coconuts. Paradise. It always comes back.” 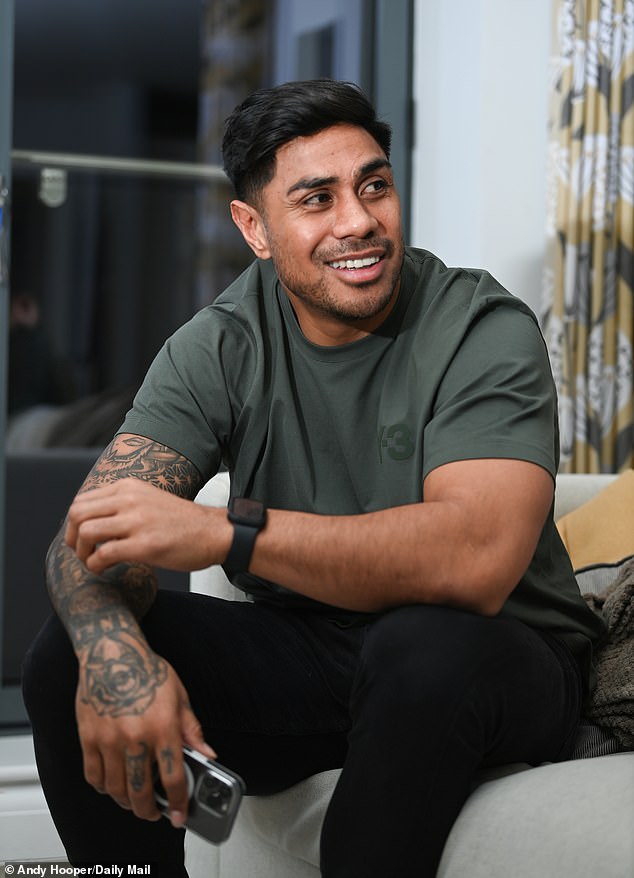 Fekitoa, who plays for Wasps and has represented New Zealand, is trying to stay positive

Fekitoa has found purpose by launching his own fundraising page. That’s why he agreed to share his story. So far he has raised £45,000 and plans to use the money to provide food.

“When it comes to rugby, I switch. When I play rugby, I take care of my family. It’s my goal. I go to training to work. I don’t go there to daydream. Immediately after the training it comes to your mind again. Back on the phone to find answers. Sleepless nights.

“I don’t want to just sit and wait. What I can do is use my platform to raise awareness of what’s going on and raise money to ship supplies. The number of people that have contacted is unreal. My agents will call companies to get a good price on food supplies. The better the price we get, the more we can ship. You want things that last, flour, rice. A huge bag of rice can last a family for months and if we buy it in bulk it is cheaper. We can fill five sea containers with the first £40,000 we raise.’

Fekitoa believes that the rugby world can play an important role. For years, international teams have stolen talent from the Pacific islands, and now it’s time to give back with more than just symbolic gestures. Changes to the eligibility rules mean that players like Fekitoa, who previously represented the All Blacks, can switch allegiances to represent Tonga. They could become an important item with a world of commercial opportunities to restart the country’s economy.

‘Rugby players are Tonga’s biggest export product. New Zealand has nine or ten Tongan guys on the All Blacks team. Half of the Japanese team consists of Tongans. Everyone at home wants to play rugby.

“What happened will make more guys want to play for Tonga.

‘How can the rugby world help? Play more games in Tonga. Give the boys more opportunities, generate commercial opportunities. It would be huge if one of the biggest countries played some games there. It would inspire the kids. Rugby can play a big part in the country’s recovery.’