From pole position, Tristan Vautier’s JDC Miller MotorSports Cadillac DPi-VR got off to a brilliant start as Tristan Nunez advanced from the second row to finish second, but only to the twisty infield when Renger van der Zande made several brave passes to take second to finish – from sixth – in the Chip Ganassi Racing #01 Cadillac.

Tom Blomqvist of Meyer Shank Racing put his Acura ARX-05 in fourth place, ahead of Filipe Albuquerque’s Wayne Taylor Racing Acura. Alex Lynn cautiously got into the second Ganassi car and fell to sixth, but ahead of Jimmie Johnson in the Ally Racing AXR Cadillac.

Nunez was sent off the road while racing GTD cars early on, allowing both Blomqvist and Albuquerque to move their Acuras to third and fourth respectively, and Nunez would soon lose fifth to Lynn’s Ganassi car.

Nunez handed the AXR #31 to Pipo Derani on lap 15, while Blomqvist simultaneously gave up his MSR Acura to Oliver Jarvis. At the same time, Van der Zande put pressure on leader Vautier, and just half a second behind Albuquerque looked in his mirrors for Ganassi debutant Lynn.

The two Ganassi cars came to the pits on lap 18, Van der Zande handed the wheel to Sebastien Bourdais and Lynn was replaced by Earl Bamber. The next time, Vautier stopped to let Richard Westbrook in and hand over the lead to Albuquerque, but both Ganassi cars had to continue due to exceeding the speed limit in the pit lane.

After the pit stop cycle, MSR and AXR were up front, Jarvis led Derani by 2.5 seconds and Ricky Taylor kicked the WTR Acura back six seconds and under pressure from Westbrook. Kamui Kobayashi had taken over the Ally Cadillac from Johnson but was fifth, 22 seconds off the lead.

Westbrook passed Taylor for third as they negotiated traffic and started trying to close the 5 second gap to Jarvis and Derani’s battle up front.

Derani would then make his second stop with 40 minutes to go, leaving Jarvis 2.3 seconds ahead of Westbrook and Taylor. But two laps later, MSR pitted Jarvis and the rest of the DPi cars quickly followed.

Taylor and Westbrook pulled out of the pack to enjoy a close battle up front, each wielding great judgment as they made their way through traffic. Derani passed Jarvis for third with less than 15 minutes to go, and Kobayashi also passed the MSR car as Jarvis tried desperately to save fuel. However, Derani couldn’t and dove into the pits with four laps to go, dropping to the back of the class and promoting Kobayashi to third.

On the very last lap, Westbrook saw a Cadillac-sized hole on the inside of Taylor at Turn 1, and nudged the Acura, causing Taylor to wobble and Westbrook to spin. The JDC Miller driver recovered in time to beat Kobayashi for second, with Jarvis beating the two Ganassi cars and Derani.

In LMP2, Steven Thomas beat PR1 Mathiasen Motorsports Ben Keating to claim the lead, but on lap six Keating came back for the class lead as the pair dropped the rest of the field.

After all the LMP2 cars had made their pit stops, Mikkel Jensen and Jonathan Bomarito continued the good work of their teammates in a PR1 Mathiasen 1-2 ahead of Devlin DeFrancesco in the DragonSpeed ​​car.

Further back against APR, James Allen drove fourth for G-Drive ahead of Dylan Murry in the Racing Team Netherlands car, but the two switched places on lap 26.

In the second half of the race, Jensen continued to distance himself from teammate Bomarito, who turned 40 on Sunday, whose closest pursuers after their second stop were Fabio Scherer in the High Class car and Rene Rast of G-Drive.

In the closing laps Rast Scherer was relegated and closed on Bomarito but was never close enough to try to take second place. 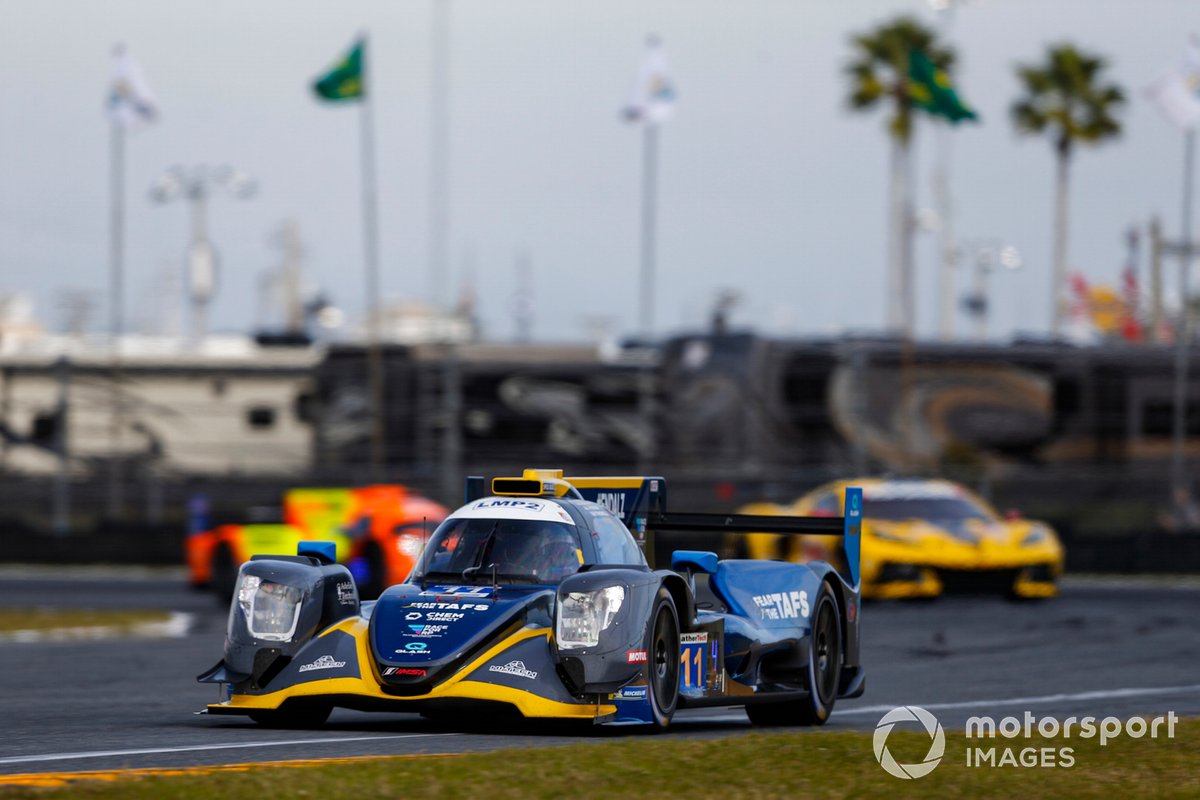 In LMP3, Cameron Shields of Muehlner Motorsport led Andretti Autosport and Riley Motorsports of Gar Robinson from the start, but the car went behind the wall within the first six laps, leaving Forty7 Motorsport’s Orey Fidani in third.

However, with just over 40 minutes to go, Shields seemingly terminally fell into the pits, giving the class lead to Josh Burdon who was now driving the Andretti car. Burdon came home more than a minute ahead of the other Muehlner car, shared by Moritz Kranz and Ayrton Ori, while Kuno Wittmer took the Forty7 car into third, albeit three laps down.

Caldarelli passed Gunn and took third, while on lap 18 Andlauer had not only passed Engel again, but was even fifth ahead of Barnicoat’s Lexus.

After the pit stops about half the distance, Pfaff remained in the lead with Felipe Nasr at the wheel, and he was still chased by another Porsche, but it was now Alessio Picariello in the #79 WeatherTech Porsche who took second, three seconds adrift , and the KCMG Porsche had dropped to 10th place with Patrick Pilet at the wheel, IMSA Radio reported a fuel problem that cost the team half a minute. 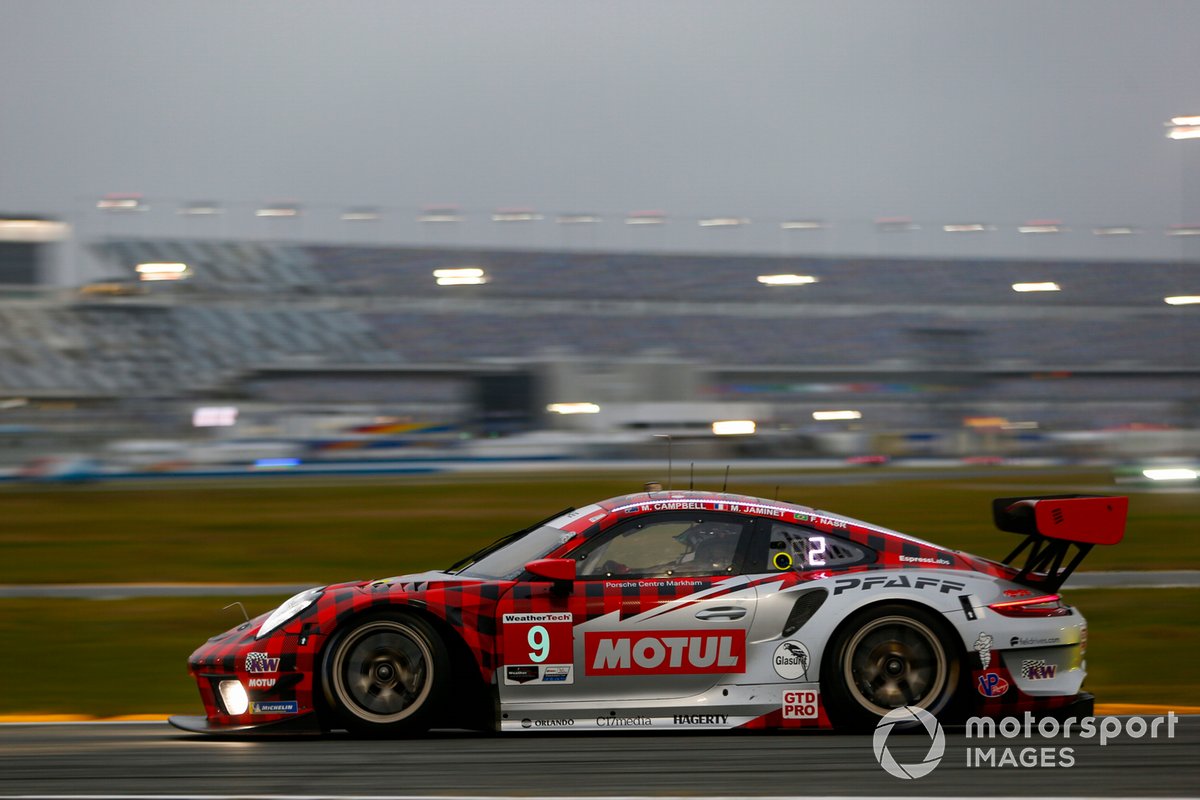 In GTD, Winward Racing’s Mercedes led in the hands of Russell Ward, chased by John Miller in the Crucial Motorsport McLaren 720S, while Kenny Habul retained his remarkable third place in qualifying, ahead of Michael De Quesada in the Alegra Motorsport Mercedes.

After the stops, Lucas Auer kept Winward in front, while Paul Holton chased him behind the wheel of the Crucial McLaren.

However, Jan Heylen, who took over the Wright Motorsports Porsche from Ryan Hardwick, was charging hard during his stint, passing Townsend Bell in the #12 VSR Lexus in third at the last gasp, while Raffaele Marciello was fifth in the SunEnergy1 Mercedes for cosmo. Up front, Auer held onto class honors by just half a second ahead of Holton.