Deep beneath the Australian Outback are some of the largest and most mysterious cave systems on Earth – where a team of explorers once miraculously survived after being trapped by an avalanche for 27 hours.

Expert cave diver Andrew Wight led a 15-person expedition to the Pannikin Plains system, one of several that contains the world’s largest continuous stretch of limestone rock honeycomb on which the Nullarbor Plain lies.

Above the surface is a vast expanse of treeless desert on the Western Australian and South Australian borders, but below that are subterranean caves and passageways partially filled with water that empties into the Great Australian Bight.

Open only to experienced divers, Wight brought in an underwater camera crew to guide the party with the intention of selling the spectacular footage to recoup some of their costs.

But when on the last day of their month-long journey, a wild storm swept across the plain, bringing torrential rains and “cyclonic” winds, the cave entrance caved in, and the film crew captured an incredible survival story.

Scroll down for video.

A documentary of cave diver Andrew Wight’s (pictured right) exploration of remote caves in the Australian Outback caught the eye of Hollywood director James Cameron (pictured left), leading them to collaborate on many films 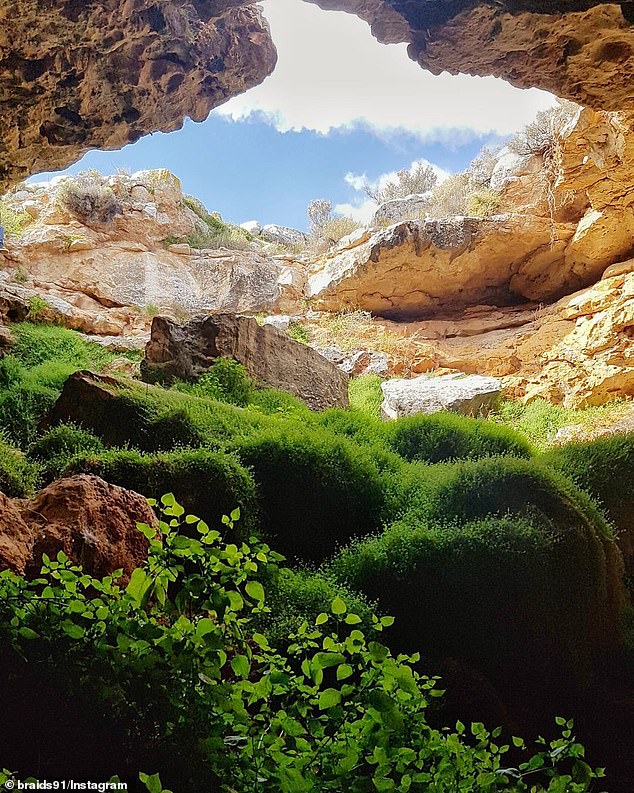 Wight and his team consisted of world-class cave divers, scientists and technicians, who at the time already held the world record for the longest underwater cave dive at 3.5 km, set out from Adelaide in 1988.

They were determined to explore the furthest reaches of the caves of Pannikin Plains in an adventure that would test the limits of human endurance.

The team, the first humans to ever venture that far into the geological wonder, would also conduct a series of scientific studies in collaboration with the University of Sydney.

dr. Julia James led the researchers at the university, then a senior lecturer in inorganic chemistry and a world-renowned authority on cave minerals, atmospheres and water.

She explained that scientists and cave explorers had always had a close relationship on the Nullarbor Plain — formed during the initial exploration of the air-filled caves.

“Now we’re going a step further because while our scientists can get into the air-filled caverns and collect samples and specimens, we can’t get underwater,” said Dr James.

“These are very important samples that no one in the world has collected yet and should provide very valuable information about how those caves on the Nullabor formed,” she said.

“I consider this expedition one of the Everests of cave diving.” 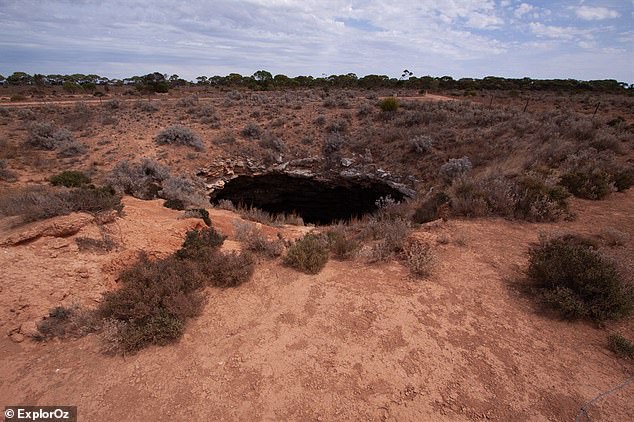 The entrance to the Pannikin Plains cave is nothing more than a small hole in the desert (pictured), but underneath is a huge cave system with huge caves and underground lakes

In the niche pursuit of cave diving, much like climbing a monumental peak, there are deadly dangers at every turn.

Perhaps even more so – as cave divers venture into uncharted territory and must constantly rethink their route as it opens up.

Their lives depend on their oxygen tanks, regulators and other equipment – if their equipment fails hundreds of feet from the safety of fresh air, catastrophe is assured.

The rules of cave diving were slowly formed over decades of fatal trial and error, including the rule of thirds for oxygen tanks.

A third of the gas to venture in, a third to get out and a third always for emergencies.

Although the water is crystal clear – akin to floating through space – the slightest touch of a surface can fill the passage with silt and blind the divers. 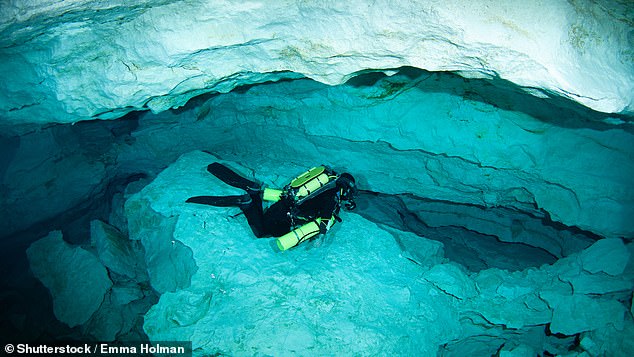 There are a number of cave diving sites in Australia, with the flowing limestone of the Nullarbor Plain providing some of the most spectacular (pictured).

Likewise, three torches are always carried to light a way through the darkness in case one or even two fail and a guideline is rolled out extending a continuous length to the exit and safety.

Then there’s the ever-present risk of decompression sickness or ‘the bends’ that occur when divers, breathing air at higher pressure underwater, ascend too quickly and create gas bubbles in the body.

But Wight and his team knew the risks and had spent months planning each event, though Mother Nature had one last surprise in store.

After arriving at Pannikin Plains, the team began their first methodical steps, setting up camp for three days and carefully lowering their gear—all five tons—from the cave mouth to the Lake Room.

They traveled more than a kilometer underwater and reached ‘Concorde Landing’, a huge underground air chamber four stories high and the length of several football fields where they set up their last base camp.

From here, the ‘push divers’ would venture into the previously unexplored ancient passageways, drifting through serene landscapes where no human had ever gone before.

“With the equipment we have, we can go up to four miles into the passage,” Wight explained.

“If there are any more caves and air-filled chambers, who knows and that’s the real excitement of cave diving — you don’t know what lies beyond the next step,” he said.

“It’s not like mountaineering where you can see the top and know what equipment to bring. Every dive here is a new challenge.’ 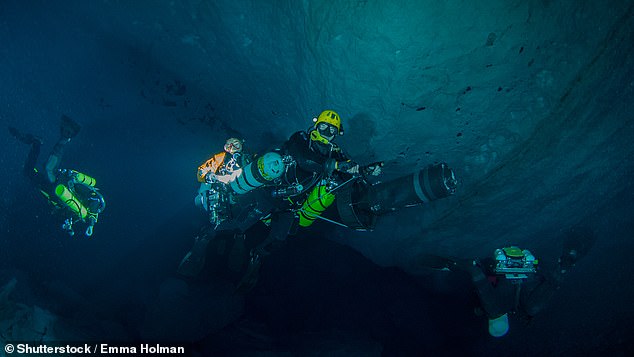 “You have to recalculate, take different gear that is appropriate and that adds to the excitement and the adrenaline that we experience while exploring.”

Three weeks into the expedition, the team held a surface meeting where they decided they would make one last dive into the Pannikin Plains in an attempt to find out if a passage they discovered was going through.

The dive was successful and they reached the end of the cave system, the way ahead blocked by boulders, and they returned to the ‘Lake Room’ where they met the rest of the crew to pack their gear ready to go home. to go.

But above the cavern, a massive storm had sprung up once every ten years and began to dump rain into the desert — two years in 45 minutes — along with golf-ball-sized hail and 100 km/h winds.

The deluge, estimated at about 300 million gallons, began flowing past the cave entrance — soaking and loosening the rock until it suddenly collapsed in an avalanche of debris. 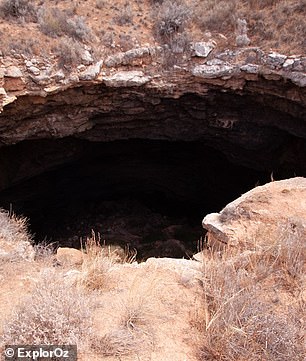 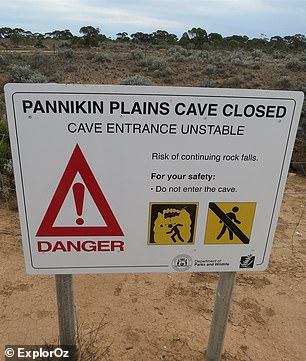 The team of 15 had tried to escape halfway through the cave and had to run back for their lives when their only way out was closed off in a deafening rumble.

Team member Vicky Bonwick and Wight had been the furthest ahead, sitting on a ledge between the rushing water and the cavern’s shifting roof.

After five hours, Wight convinced Bonwick that they should move and risk being swept away by a boulder rather than stay and risk the roof collapsing further.

They made their way through crevices and back to the surface, where Wight then called in the cavalry and led a 27-hour rescue mission.

They got in touch with the 13 trapped cavers, thanks to a Ron Allum-built two-way radio that could transmit through solid rock and began coordinating their escape.

The group — who had rationed their food and water and remained remarkably cheerful given they were buried deep underground — were determined to risk the unstable rock outcrops to get to safety.

They were gradually led up one by one, hundreds of meters through the ever-precarious boulders to the surface.

The footage captured by cameraman Wes Skiles – one of the last to emerge from the cave – was then made into a documentary titled “Nullarbor Dreaming.”

The film caught the eye of Hollywood royalty James Cameron — who was still several years away from directing Titanic — and it sparked a friendship with Wight and Allum.

Wight would go on to become a successful film producer, working on 45 films – mostly documentaries about ocean exploration – as well as writing the hit 2011 film Sanctum, which was loosely based on the Pannikin Plains Expedition.

The film – thanks to Cameron’s name as executive producer – made $100 million worldwide.

Allum would go on to serve as technical director of Cameron’s successful ‘Deepsea Challenger’ expedition. 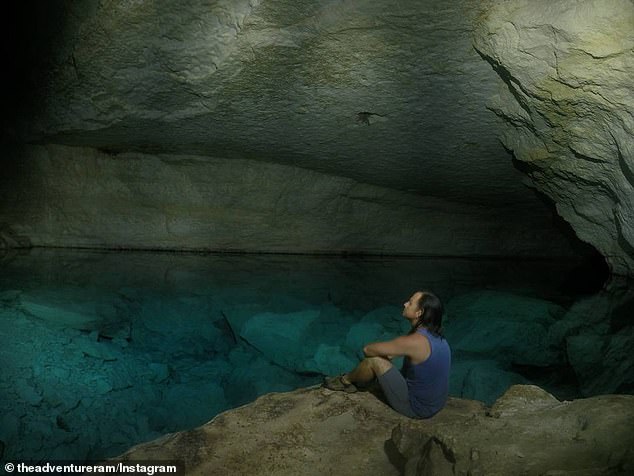