‘BEFORE we were in darkness, you have now brought the light’ – says the director of a school in Malawi where the work of a rugby charity has ‘transformed’ students’ lives.

A renovated toilet block at Isyalikila Junior School in the South East African country is the latest collaboration between The Bwengu Project – a charity that funds and implements education and community projects in the Bwengu district – and the Rotary Club of Rugby.

The new Bwengu Project-funded girls’ toilet at Isyalikila Junior School has improved the attendance and passing of exams among older girls in primary school.

Retired rugby couple Tony and Sue Melia founded the charity in 2005 after witnessing appalling conditions at a school in Malawi where they volunteered to teach.

The Rotary Club of Rugby, which is celebrating its centenary this year, has supported the Bwengu project for six years now, funding repairs to classrooms, school furniture and many of the 64 toilet block renovation projects.

Tony said the poor condition of school toilets in Malawi was a major reason for high absenteeism rates among older girls in primary school, adding that the charity’s work to add toilets for girls is increasing attendance and success rates. improved for the exams.

The club has also funded teaching packages for schools in the region. First introduced in 2017, the solar-powered LED projectors and tablets with built-in speakers enable audiovisual content to be played in the classroom.

Tony said: “The aim of the kit is to be able to deliver the Malawi National Curriculum to schools where facilities are poor or limited. Electricity is not always readily available and supply is unpredictable at best. There is also a shortage of textbooks and writing materials and classes are often over 100 students.

“We asked teachers in Malawi to write their blackboard notes on A4 paper and we brought it back to the UK. They were then transferred and stored on SD cards for use with the tablets. In total we scanned about 22,000 lessons on the tablets.

“Since the program started in 2017, we have seen clear evidence of impressive improvements across all schools.

“Rotarians work hard to raise funds to help the less fortunate in this world. The least we can and will always do is ensure that their donations are spent wisely, with zero waste and good project results every time.” 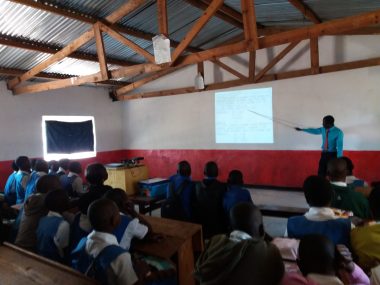 He added that more than a third of children in the far north of Malawi – where the charity operates – leave school without being able to read, write or complete basic maths.

He said: “Since 2008, 12 villages have been offering free adult education classes in reading, writing and basic maths for six months. So far, about 1,400 adults have achieved basic academic requirements. Rotary Clubs have funded at least six of these adult education projects in the village, of which the Rugby Rotary Club funded four.”

A spokesperson for The Rotary Club of Rugby said: “The whole Class Teaching Kit has been a revolution for both children and adults in Malawi. Gone are the days when it was a book among the over-75s.

“The proof of this method is in the improved exam results of all schools lucky enough to have access to the Kit. And their parents can now also use the method to get the education they missed as children. Giving people the opportunity to read and write is a huge privilege.”

Dawin Sikwese, head teacher of Isyalikila Junior School, said: “We really appreciate this great gift to the people of Isyalikila, it really changed their lives.

“They can now read, write and complete simple math, but more importantly, they know their rights. They can undertake development activities without resistance because they now know their rights and responsibilities.

“Before we were in darkness, you have now brought light.”

Malawi is the third poorest country in the world, according to the International Monetary Fund, with one in ten adults living with HIV or AIDS and one million children orphaned by the disease.

The Bwengu district is the size of Warwickshire and includes 52 villages with a population of 18,000 people and 32 primary and secondary schools.

Many schools in Malawi are in extremely poor condition and many schools have not been maintained since they were built in the 1940s and 1950s. Due to a shortage of classrooms, there are often more than 100 students per class.

The Bwengu project provides materials for communities to carry out renovations and construction projects.

Visit www.bwenguprojectsmalawi.org to learn more about The Bwengu Project, or www.justgiving.com/bwenguprojects to donate or raise money.