The 2021 DI women’s volleyball season was one for the books. And yes, I mean that in every possible way. After a shortened 2020 season, many seniors made the big decision to return for one last round at their respective schools. The amount of talent in these teams made for an incredible season… that’s a fact.

But more than that, it made for an incredible NCAA tournament and championship. Wisconsin took home the trophy for its first-ever national title in the history of the program, and one of the largest groups of super seniors ended their collegiate careers with their fairytale ending. But other than that, we’ve seen SO many incredible moments in this tournament. History was made, seasons turned around, dreams came true and much more.

Here are some of the best moments from the 2021 DI Women’s Volleyball Tournament…that we’ll never forget:

History was written in the ACC

The ACC has been emerging in the volleyball world in recent years and is making noise left and right. But history was made in the 2021 NCAA tournament. Six ACC teams earned a spot in the tournament, culminating in #1-seeded Louisville and #3-seeded Pittsburgh. Both teams reached the national semifinals for the first time in the program’s history, and in addition, they became only the second and third ACC teams to ever make the top four. Despite losing both in the semifinals, the ACC is on the map and Louisville and Pittsburgh should be volleyball powerhouses for years to come.

Nebraska has had one of the most incredible season turns 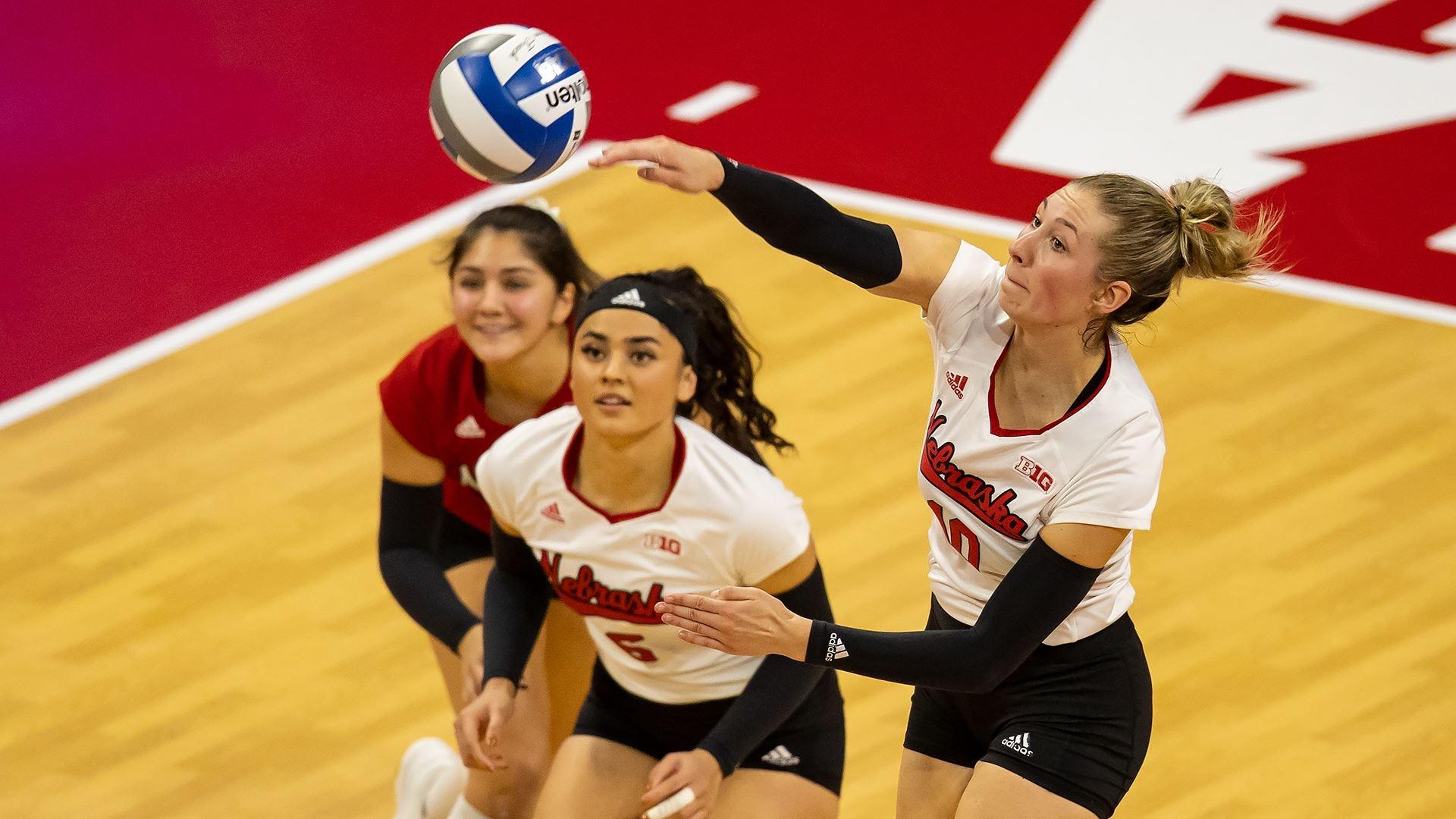 If anyone could make this big seasonal turnaround, it’s Nebraska. At the start of the regular season, not many people thought Nebraska would be playing for a national championship. And on top of that, playing in a five-set thriller and giving Wisconsin everything they could handle. With so many talented freshmen, John Cook found himself switching lineups game after game to find his answer. Freshmen and veterans battled for a spot in the lineup, and the Huskers dropped out of the top 10 after suffering three consecutive losses. But they found their answer with three freshmen in the lineup, they peaked at the right time, and fast forward into the tournament and we saw one of the biggest displays of unity. This team defeated Texas and Pittsburgh for two of its biggest setbacks and fought hard for the national title. This turnaround is one we’ll never forget…never counting Nebraska.

If there are certain moments from the tournament that I will never forget, it is these. For some reason, the big comebacks are the ones that always stay with me the most. It’s the moments when I’m on the edge of my seat and the moments that remind you that in sport anything is possible.

Purdue reversed sweep after dropping the first two sets against Dayton in the second round, then trailed 14-10 in the fifth set against BYU in the regional semifinals before beating four match points and winning it in five. Now that is an unforgettable moment.

Texas had another big comeback with a five-set win over Washington after trailing 2-0 in the regional semifinals. They stormed back and absolutely dominated in the fourth set. 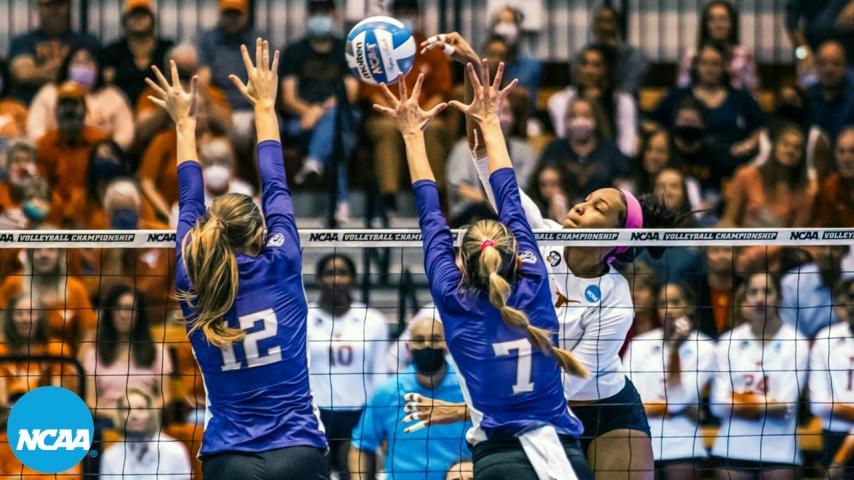 I can’t say enough about Lauren Barnes and Lexi Rodriguez. The defensive performances we saw from these two in the semi-finals and title game were absolutely insane. You know the old saying in the book… Defense wins championships! Rodriguez and Barnes launched their bodies across the pitch to keep ball after ball alive, bringing unforgettable moments and rallies to the tournament.

Our National Semifinals this season featured two ACC teams and two Big Ten teams, and Wisconsin and Nebraska advanced for our first Big Ten title matchup since 2013, when Penn State and Wisconsin faced each other. The great thing here is that you get two teams that have already played against each other multiple times, they have learned from their previous matchups and can make adjustments. It makes for a struggle, as we saw this year.

Wisconsin set the record for most blocks in a championship game 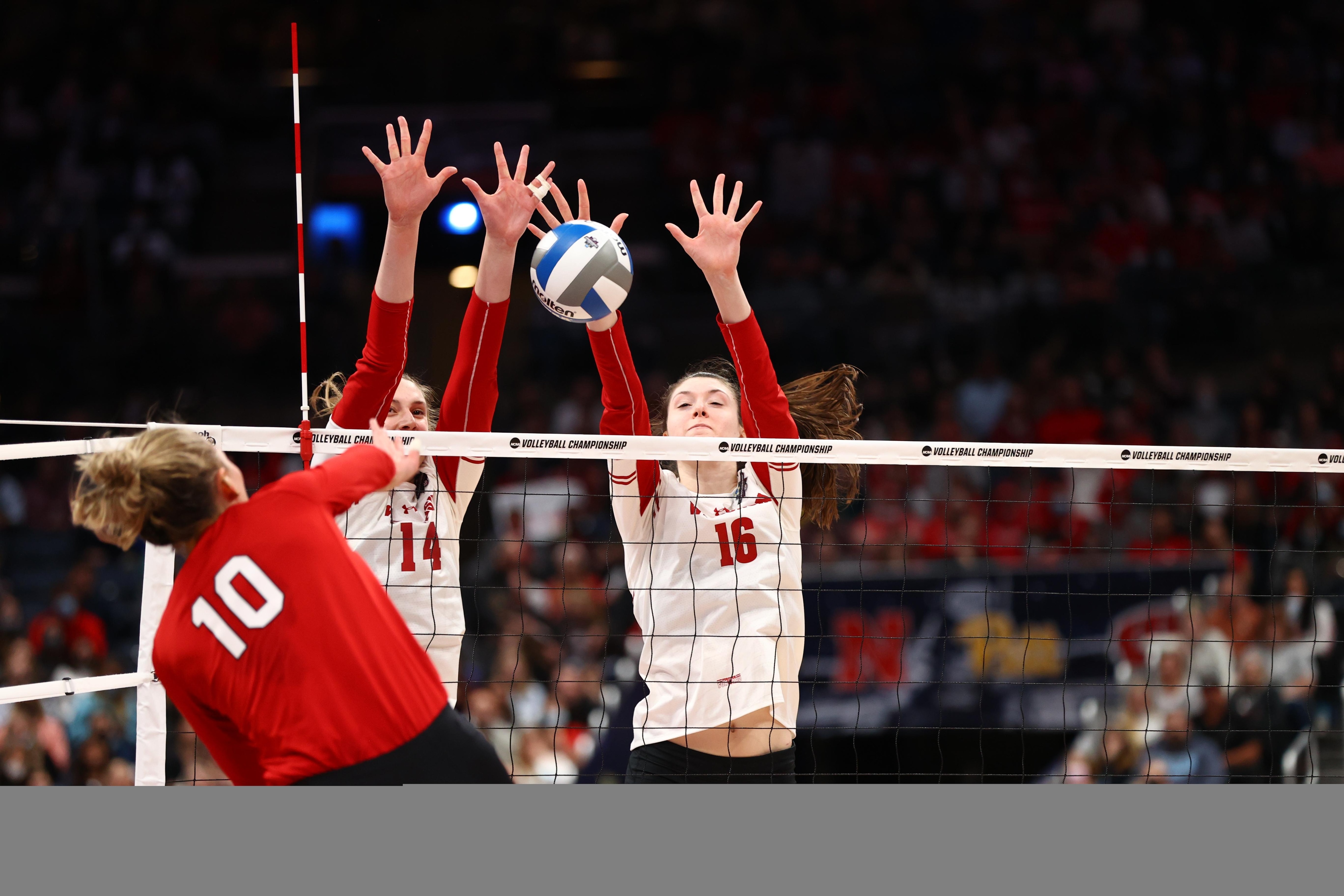 The championship game was an absolute block party. The Badgers placed 24 blocks in the game, setting the record for most blocks in a title game. Dana Rettke had 13 of those blocks to her name, and it sure was fun to watch.

Heroes were born in the tournament

Aren’t there always? Heroes are always born in the tournament and when it comes to winning a national championship, every champion usually has an X factor. Wisconsin certainly did, and that was Anna Smrek, the most notable player of the tournament. A freshman by the way. Smrek probably wouldn’t even play much this season, but when star mid-blocker Danielle Hart tore her ACL, Smrek got her chance. She started announcing her name late in the regular season, but she absolutely broke the stage in the tournament. She led the Badgers past Louisville with an insane performance of 20 kills with an impeccable batting rate of over .700, then led all batters in the title game with 14 kills on .429 strokes. Now that’s a hero, born in the tournament.

Wisconsin had another X factor in the title game with Jade Demps coming out huge from the backcourt for probably her best performance all season.

There were also a few other heroes born in the tournament… Mariana Brambilla for Georgia Tech had a more than memorable tournament appearance, Leketor member-Meneh got the recognition she deserves after the transfer from the Pitt and emerged as a superstar in the second half of the season, and what about those freshmen… Lindsay Krause, Ally Batenhorst and Lexi Rodriguez who led Nebraska to the title game. The heroes are always unforgettable. 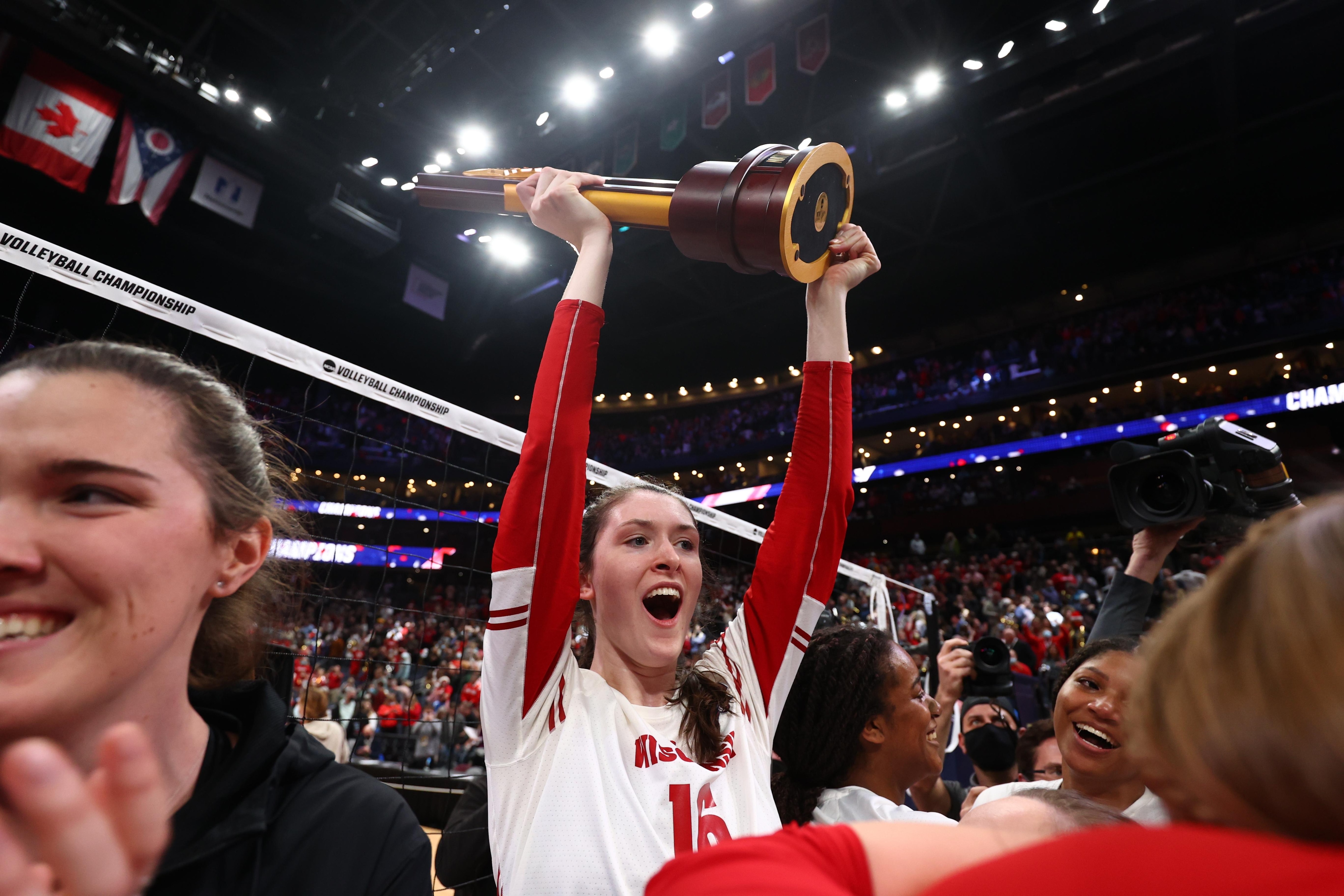 In August 2021, I wrote a story about the top 7 storylines and unanswered questions for the 2021 season. At number 2, I wrote, “Will this be Dana Rettke’s year? Could she become the 2021 National Player of the Year?” Few center blockers win the NPOY award, but Rettke is one of the outliers. The prophecy came true.

Rettke became the first player in history to ever be a five-time first-team All-American, and she justly won the AVCA National Player of the Year in the same season. I couldn’t be happier for Dana to achieve this. She exudes kindness, leadership and confidence… she is as humble as ever, an incredible teammate and now the best player in the country. She came back for her fifth season and led her team to the title. Rettke is a dominant volleyball player and we will miss those fist bumps on the collegiate stage greatly.

The title game came down to five sets

We love a five-set thriller, and we love it even more in the title game. But the title game we saw this year was even more than that. It was everything you could wish for. The highest level of volleyball we’ve seen all season and a competitive battle for the history books. It was a battle of attrition, and it just goes to show how incredible the sport of volleyball really is. The sport can only get bigger and bigger and such a competition is unforgettable. 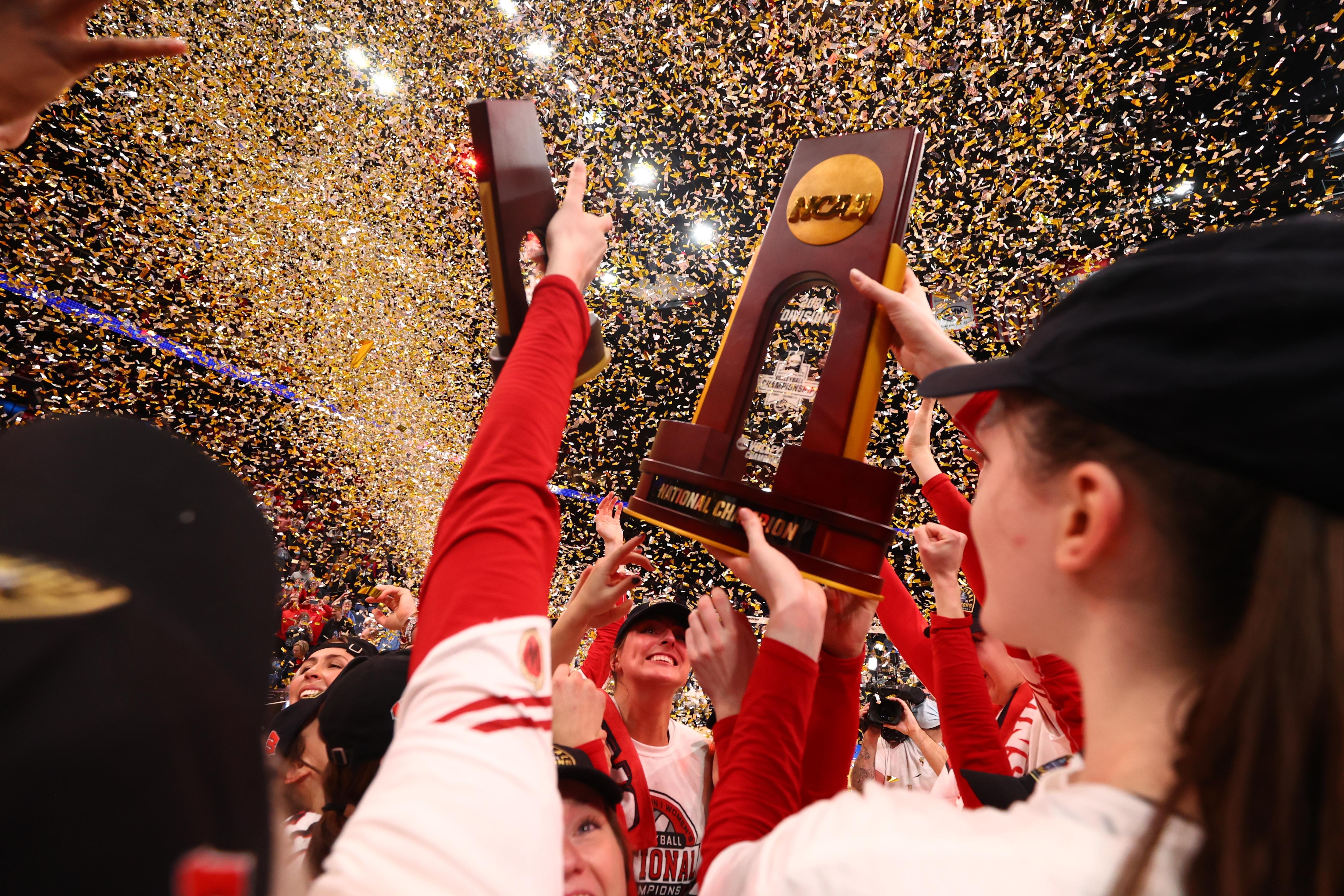 Alas, the last unforgettable moment of this year’s tournament – Wisconsin won its first-ever title in the history of the program. Three years in the making, and the third time was the charm. A memorable national title for a very deserving team and coach.