The first round of the #GibChess Battle of the Sexes Tournament, held at the Gibraltar Garrison Library on Monday, January 24, got off to a pulsating start when the women’s team, dubbed ‘Team Pia’, after their captain, GM Pia Cramling, scored a big win over ‘Team Sabino’, as the men’s team is now known, with four out of ten women’s players scoring wins against their male opponents, with only one male player able to win in response.

The men’s team is thus 31⁄2-61⁄2 behind after the first round, with the comforting thought that they still have to deal with the white pieces. They hope to come roaring back in round two when the colors are reversed. Still, three points is a significant shortfall to knock over the chessboard in one visit and they will feel the pressure.

The first match to end was Zhansaya Abdumalik against Andrés Merario Alarcón. As her female rivals discovered in May/June last year, when she won the FIDE Women’s Grand Prix tournament at the Caleta Hotel in Gibraltar with a tournament performance of over 2,700, Abdumalik is a formidable opponent, but the Spanish IM, drafted in the side as a last minute replacement for Gillian Bwalya (still en route from Zambia to the Rock – he has now arrived) was up to the task and held their own.

Out of a Giuoco Piano opening, he devised a new maneuver to regroup his pieces and secure a comfortable position in which White had no apparent way to progress.

Another draw followed when France’s Marie Sebag tied with Argentina’s Leandro Krysa. This started with a variant of the Caro-Kann, named after a regular customer from Gibraltar, Nigel Short. Krysa took a solid position from the opening and was at least equal when a draw was agreed on move 20.

Olga Girya was the first to score a win shortly after after taking advantage of an early inaccuracy from Joe Gallagher. Gallagher is one of the most experienced King’s Indian Defense players around, but the early and unusual deviation 6 Be3 took him into lesser known territory and 8…Qe7 was a serious inaccuracy. By the time he blundered with 19…Be8, his position was almost lost. 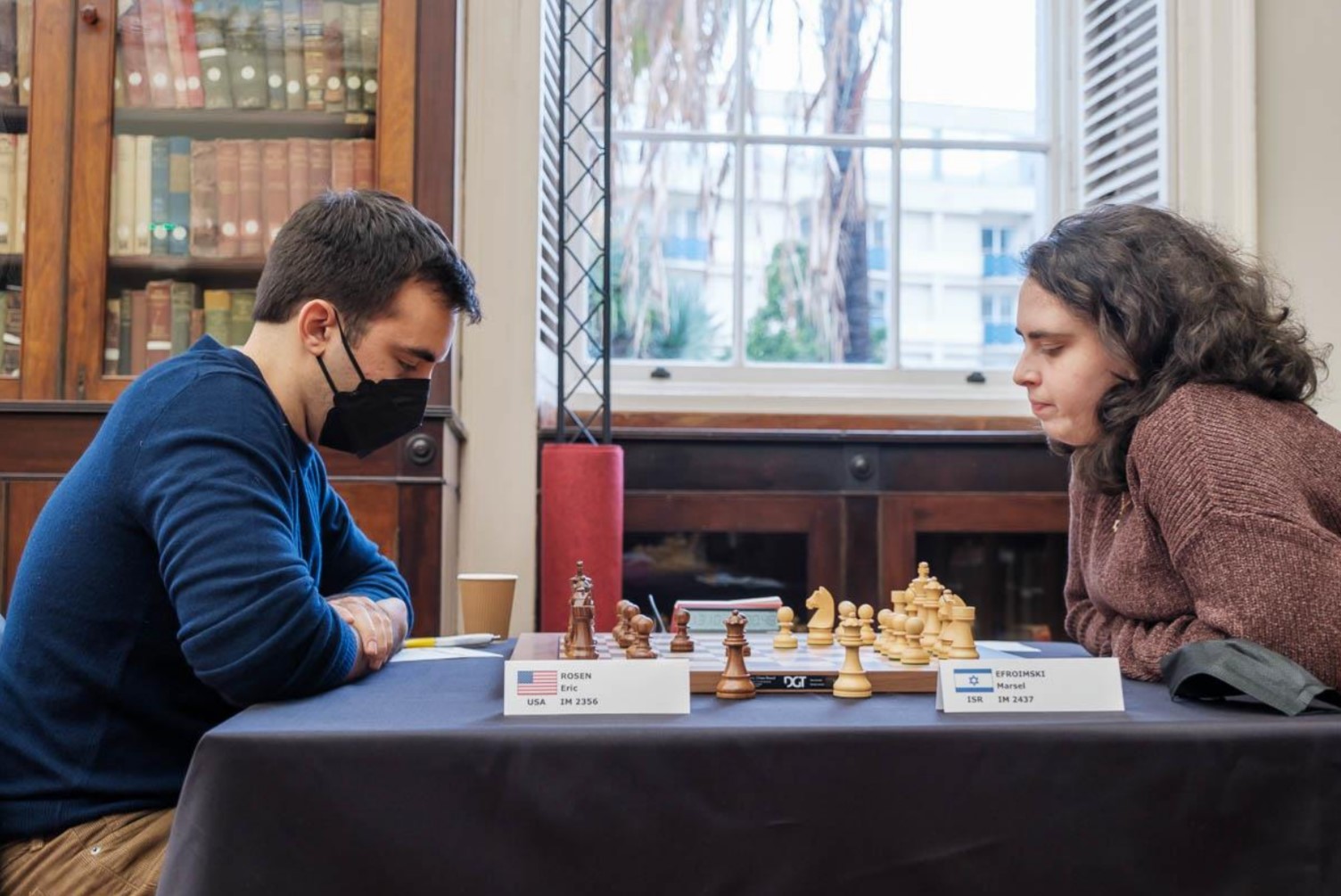 Marsel Efroimski’s play with Eric Rosen started with a Bb5 Sicilian and then developed into an unusual queenless configuration in which white had two weak knights on the queenside edge and black two pairs of doubled kingside pawns. Rosen’s position seemed fine, as did his subsequent pawn sacrifice, but the position suddenly turned sour for him and White consolidated her extra pawn. Worse for black was the loss of another pawn and when faced with three connected pawns passed through, he had to resign, increasing Team Pia’s lead to two points.

The only man to lift the battered male standard on the first day of the inter-gender standoff was Balazs Csonka of Hungary, who defeated Jovi Houska of England. The game started with an accepted queen’s gambit and stayed in known territory until move 15 when white tried Nd6. This proved to be flawed and was exploited by an immediate Na4 which exposed white to serious problems on the dark squares. White gave up a pawn, but her position problems piled up and proved unsolvable.

Antoaneta Stefanova’s match against Bobby Cheng started with a King’s Indian Attack and remained fairly even throughout. Eventually the pieces fell off and there was nothing to play for when the draw was agreed on move 32.

Gunnay Mammadzada tried an unusual but well-known variation (10 Re2) against Husain Aziz’s Berlin Ruy Lopez. Another reluctant encounter followed which was pulled after White dodged a slightly awkward pin on her knight and exchanged some material.

Newly minted English GM Ravi Haria defending an exchange line from the French against former women’s world champion Mariya Muzychuk. Damen got out early and a gambled pawn was returned to reach a fairly comfortable endgame. 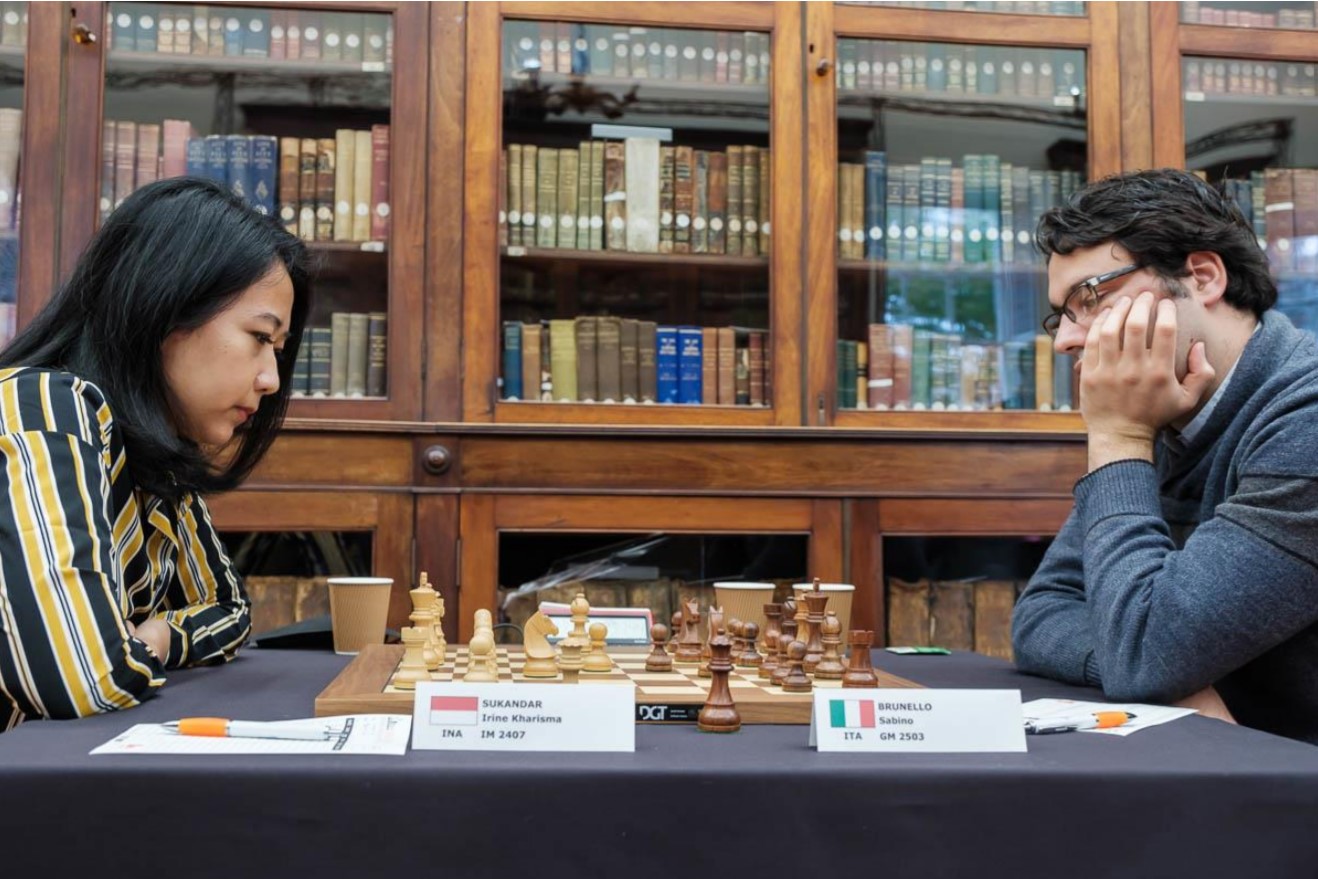 Those were just the games of the two team captains, who fought through to the end of the round, but with contrasting fortunes. Sabino Brunello seemed to do quite well against Irine Sukandar’s orthodox Ruy Lopez opening and could have possibly been better positioned, but for a careless 22…Qa7 move that allowed White to strike immediately with 23 Bd5! From that moment on, Black’s game quickly fell apart. Black partially recovered before another error forced him to resign. 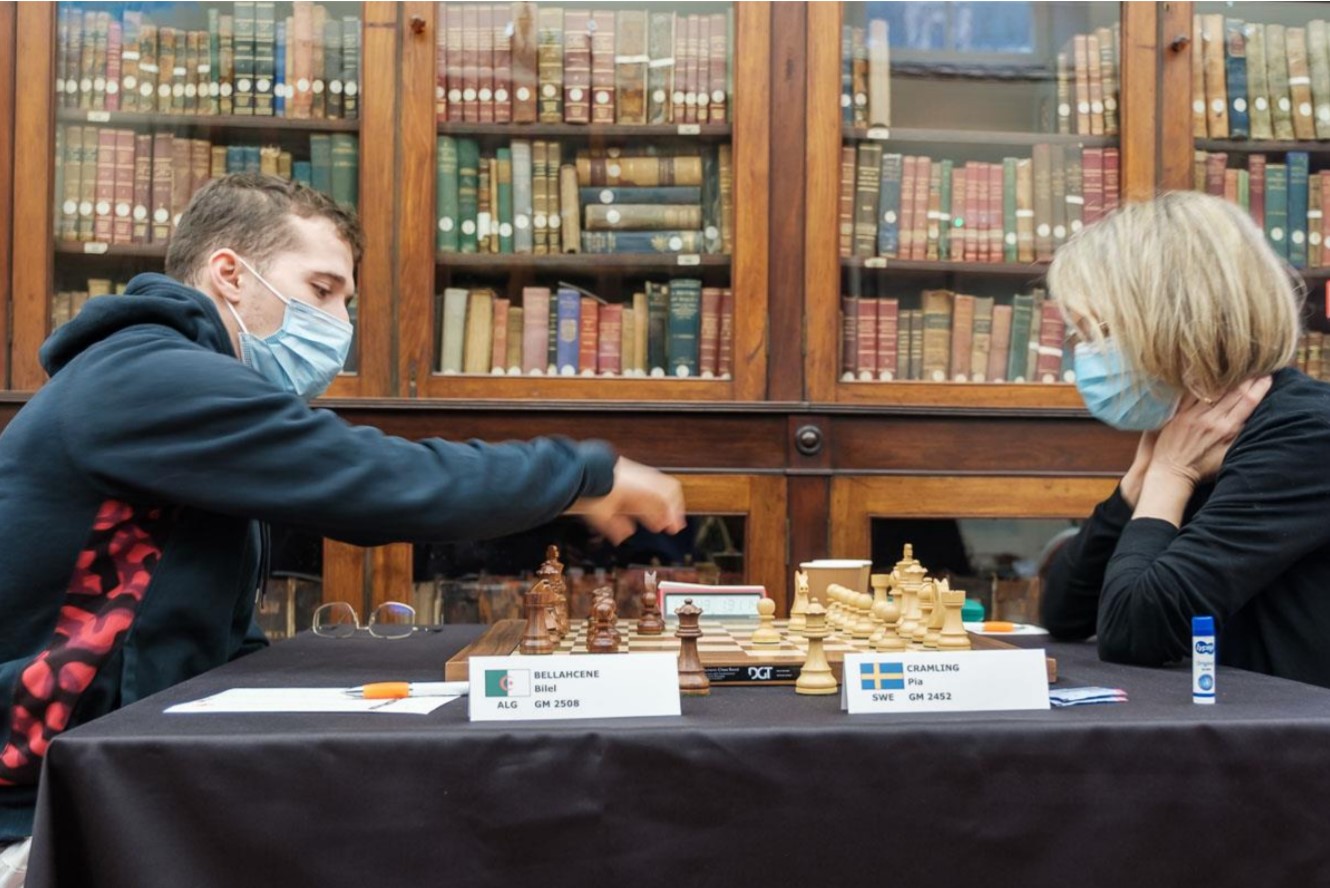 Finally, the match between Pia Cramling and Bilel Bellahcene ended. The opening was a cross between a Nimzo English and a Nimzo Indian, but looked fairly orthodox despite the lack of ‘book’ confirmation. Black gave up a pawn for counterplay, which might have worked, but an imprecise follow-up leaving him with a pawn for very little. It still seemed difficult for White to win, but she found an ingenious trick that robbed her opponent’s knight of feasible moves near the center of the board. There may have been a way out, but Black couldn’t find it and lost.

The first round was exactly the kind of entertaining and entrepreneurial chess envisioned when the idea for the tournament was conceived by organizer Brian Callaghan. Team Pia put up a strong challenge with this 6½-3½ deficit. Will Team Sabino rise to the challenge when they make their first attempt with the white pieces?

The best way to find out is to watch the show every afternoon at 1500 CET.

By the way, kudos to Lawrence Trent who single-handedly manned the microphone for the early part of the first round, and great credit also to the fearless and unflappable Irina Bulmaga for responding to a last-minute invitation to cross Europe to take the seat. next to occupy Lawrence for the second half of the round. Further good news is that Gillian Bwalya has completed his long journey through Africa to join the men’s team, while chief referee Ana Srebrnic will also join us soon after she has recovered from the coronavirus.