“People with Down Syndrome need to feel loved, valued and included.”

It started out as an idea. It ended up as a social media sensation.

The sight of the Together Academy performing the Haka in front of the All Blacks the day before Ireland’s win exploded worldwide in November.

It all evolved out of the connection made between the Academy, the IRFU and the Barrett brothers, Beauden, Jordi and Scott, who have been vocal about supporting the Down Syndrome community in light of their little sister Zara.

“We made a connection to Zara Barrett, Beauden and Jordi’s sister, who has Down Syndrome,” says Together Academy founder Therese Coveney.

“It was never meant to be a huge event. We only had two days notice. We engaged the Maori community in Dublin and two great guys came and trained the lads properly.

“Elverys jumped aboard to sponsor jerseys. Tony Doyle Coaches gave us a bus and we were off to perform the Haka.

“The Together Academy students did an amazing job. It was very moving. It turned into a huge event because the All Blacks released it onto their social platforms.”

The Together Academy is a training college and social enterprise for young adults with Down Syndrome.

“It was set up because of the unacceptable statistic that 90 per cent of adults with Down Syndrome in Ireland are not in paid employment,” says Therese.

“We have a daughter, April, with DS and that statistic really bothered me. I think everyone can acknowledge it is unacceptable. I spent nearly two years researching projects, locally and internationally, that worked for adults with intellectual disabilities with our Program Manager, Cathy Smith.

“At the moment, a young adult receives their disability payment and goes into day service provision. For many, that’s the limit of their working opportunity.

“These days, children born with intellectual disabilities are getting speech therapy, occupational therapy and are often going to mainstream schools.

“There is not the same societal change for these people as adults as there is for them as kids. It’s something I was really aware of.

“They were not benefiting from skills that would make it easier to find a job.”

The research Therese and Cathy embarked on revealed how Down Syndrome men and women learn best through visual stimulation and repetition. The decision was taken to find a way of giving them proper rigorous training and work experience.

Last year, the club celebrated 150 years in existence and there has been an elevated commitment to reach out to the community.

This led to a mutually beneficial partnership to house the Together Academy’s education program in the clubhouse.

“I pitched the idea to Wanderers. They have been fantastic. They have a very progressive board,” says Therese.

“There is a lot of talk about diversity and inclusion in sport. What does that really mean, in practical terms?

“When the club spoke to me about their vision, I included the observation that ‘If we can make this work in Wanderers, we can make it work anywhere’. After all, in every county in Ireland, there are under-utilized clubhouses.

“This is a pilot programme, something that can be scaled up. The concept is to show how it can work as a commercial business and to show other people around the country how to do it.

“In the end, we are trying to challenge the current lived experience of an adult with Down Syndrome in Ireland today.”

The Education Training Board (ETB) is now funding the ’employment and culinary skills course’ at Wanderers. 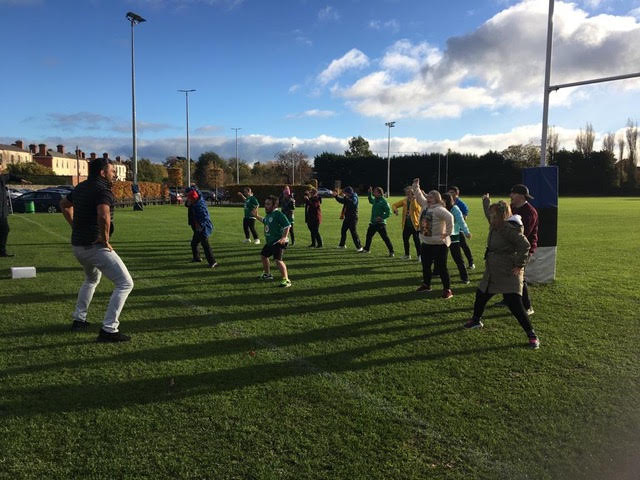 An old billiards room was renovated into a classroom and the kitchen off the bar upstairs was perfect for the plan to open up the ‘Together Academy Café’, where their learning could be put to use in a practical way.

At the moment, there are 17 young adult students on site from Monday to Thursday, benefiting from funding by the ETB and Pobal, a government body working to support communities and local agencies in achieving social inclusion and development.

“When the cafe is open, the students will come into contact with the club members, the players, the coaches and the general public.

“This will be the basis for building their confidence and their skills over two years so that they will have the option of independent employment.”

The opening of the ‘Cafe’ was paused due to the complications around Covid and the response has been to adapt and overcome.

A luxury hamper business was created in which 350 were sold out within 72 hours and a further 520 sold out in double quick time in a tremendous example of commercial flexibility.

Unfortunately, Down Syndrome adults can lose motivation. Health and well-being are a huge part of keeping them interested. That’s why they start every day with 15-20 minutes of exercise on the pitches at Merrion Road.

The Together Academy is one element of Wanderers wider plan to increase engagement with the local community.

There is greater interaction with the local schools, led by CCRO Ger O’Reilly, including a blitz for local schools St Patrick’s, Ringsend, Scoil Chaitríona, Baggot St, St Christopher’s and St Conleth’s Junior School which had brought 139 fifth class pupils to the club.

There is also a lift in numbers at minis and youths rugby with teams all the way up to U-17 and the first girls specific training team (8-12 years old).

The performance of the Dublin Sports Club (DSC) Wanderers Touch Rugby teams have provided players for both the men’s and women’s Irish touch teams this season on top of the U-20s, the women’s team and the three adult men’s teams, the first team challenging for promotion from AIL 2B, the women team and the U-20s.

These are exciting times at Wanderers with a state-of-the-art complex planned to embrace their push to rebuild.

The ultimate aim is to rebrand Wanderers as a community-based sports and recreational club, and a successful trophy-winning club with rugby as its primary sport.

The partnership with the Together Academy is just one example of how one old club is embracing a new way forward.