Get the latest Syracuse news delivered right to your inbox.
Subscribe to our sports newsletter here.

Mae Batherson was the lone Syracuse defenseman in position when Princeton’s Daniella Calabrese extended her stick to intercept a pass. Before Calabrese could get close to the goal, Batherson quickly muscled Calabrese off the puck and won possession back for the Orange.

Moments later on the other half of the ice, Batherson collected a missed shot from Shelby Calof and cycled it back to Tatum White, who found Calof for a follow-up shot and a goal.

Calof scored, and Batherson’s assist helped Syracuse take a 4-3 lead against Princeton. Batheron has been an integral part of SU’s hockey team this season, recording 22 blocks — fifth-highest on the team.

But before the ice hockey season began, Batherson started playing an important part for another SU athletics team. Throughout Syracuse football’s season during the fall, Batherson spent time on the sidelines during practices and games as a hydration assistant, setting up equipment and ensuring players received adequate fluids.

“It definitely was a great experience just seeing how professional everything is, especially with the football team,” Batherson said. “That was a different atmosphere for me being a hockey player.”

Batherson was one of roughly 10 students working under Alison Mitchell, an assistant athletic trainer for the football and tennis teams at Syracuse.

Batherson, a health and exercise science major in the David B. Falk College of Sport and Human Dynamics, first heard about the opportunity through the ice hockey team’s athletic trainer.

“I was kind of shocked to be honest,” Mitchell said of Batherson’s commitment to becoming a hydration assistant. “She’s the first student-athlete we’ve had.”

Batherson, who aspires to work in sports physical therapy and athletic training, said she became a hydration assistant to gain experience working in a professional setting.

The junior began working during the football team’s summer training camp, which consisted of seven hour days, six days a week. Batherson and the other students arrived at practices roughly an hour early to help set up medical equipment, hydrators, Gatorade wells and whatever Mitchell, as well as the players, required.

Batherson was also given the opportunity to observe Mitchell during each practice, and Mitchell said Batherson gained “valuable” experience to understand firsthand what goes into being an athletic trainer.

Batherson typically worked with the wide receivers, following them around each practice and making sure they stayed hydrated. Sometimes for Batherson and other assistants, it meant going out of their way to put a water bottle in a player’s face, Batherson said.

Even when the hockey season began, Batherson still managed to find time as a hydration assistant despite having classes and practices nearly every day.

In the mornings, Batherson ran straight from hockey practice to the football field with her hair still wet from the shower. Mitchell described how impressive Batherson’s commitment was considering the job was already a lot for other students who don’t play a sport.

“She was always very dedicated to our program and her program,” Alaina Hauber, another football hydration assistant said. “I was exhausted from practices and games and I didn’t even play a sport.” 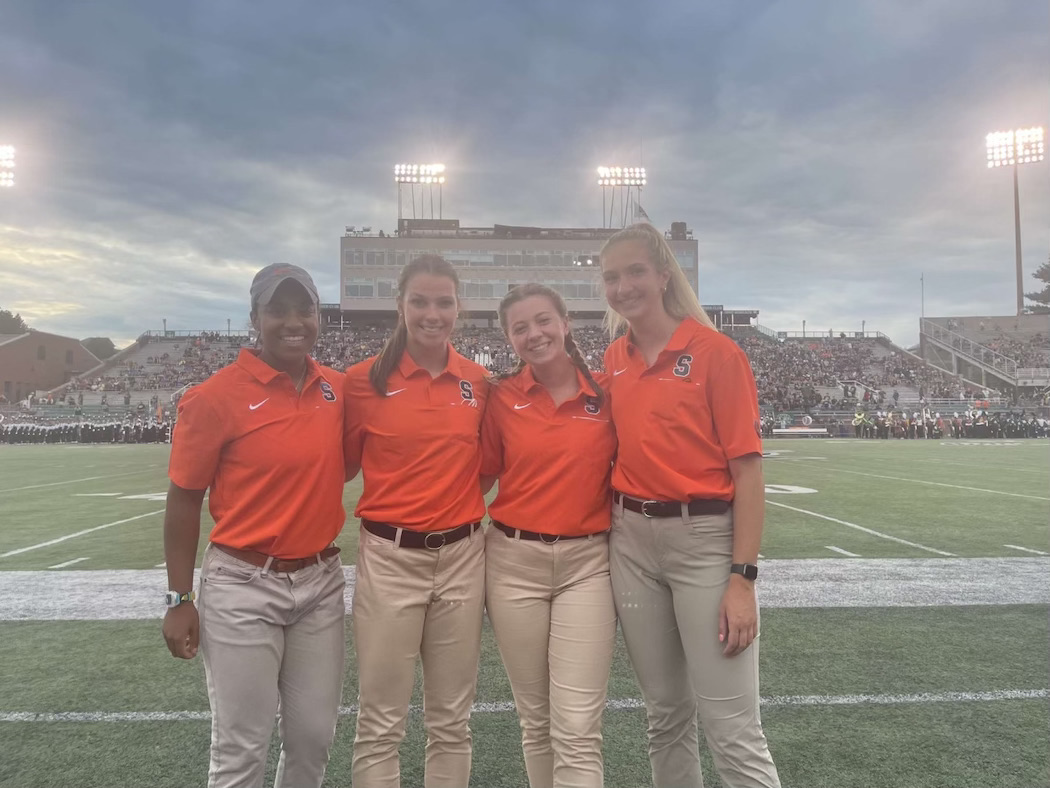 After ice hockey practice early in the morning, Mae Batherson would rush over to the football field to assist the athletic training staff.Courtesy of Mae Batherson

But for students like Batherson who want to work in that field or pursue a master’s program for athletic training, getting hands-on experience is necessary, Mitchell said.

Before the hockey season started, Batherson traveled with the football team to Ohio for the season opener, where she realized how much effort and work goes into preparation as an athletic trainer. Standing on the sideline for her first game also made Batherson somewhat nervous, she said, but she enjoyed her first experience nonetheless.

“I was definitely busy but I think it is something that I’d like to continue doing, so I think it was worth it,” Batherson said.