Gibraltar! Most people know it as a British Overseas Territory and headland on the Spanish south coast. Some people know about the impressive 426 meters high Rock of Gibraltar which has seen different cultures settling and then blending together for centuries. Guarding the only entrance to the Mediterranean Sea from the Atlantic Ocean, Gibraltar (from Arabic – Jabal Ṭāriq – mount Tarik) has always had a highly important strategical role. Since the 18th century, Gibraltar has been known as a symbol of British naval strength and it is referred to by the locals as “the Rock”.

The Rock… I believe it has actually become an important pillar in the chess world since the inception of the Gibraltar Chess Festival in 2003. The nineteen editions have seen a lot of strong players, even World Champions along with simple chess enthusiasts and amateurs gathering together for 11 days rich in chess, fun and social activities. For years, Gibraltar was ‘the dream’ for me – the place to be and I am only sorry I did not manage to achieve it earlier! Since 2019, I have returned to ‘my beloved Rock’ every year and if previously in the role of a player, this time – in 2022, as a chess commentator for the first time!

One might wonder why I chose the word “pillar” when describing the Gibraltar Chess Festival. Well, this time, as I didn’t have to spend endless hours on my preparation for the games, I could instead use them for finding out curious facts! Did you know for example that Gibraltar is considered to be one of the two Pillars of Hercules? The other one is the Mount Hacho, near the city of Ceuta, in Morocco. According to Homer, the Pillars were created when Hercules broke the mountain which connected Europe and Africa defining the western limits of navigation for the ancient Mediterranean world!

How interesting it is to observe the duality of everything – life and death, good and bad, yin and yang, masculinity and femininity, the 2022 GibChess Battle of the Sexes!

Gibraltar has always been a great supporter of women in chess – there was no better opportunity for the ladies to play against the strongest players in the world competing for norms, honor and big cash!

Due to the pandemic, the tournament had to rethink its format and it reinvented itself as “The Battle of the Sexes”– two teams of 10 men and 10 women of similar ratings and strength played against each other for a £100,000 prize fund! The fight was fierce and when asked whom I would bet on to win before the match, I’d choose the Women’s Team, as it was composed of professional chess players only. Unlike them, the Men’s Team was mainly composed of semi-professionals – some young talents, some who divided their time between coaching and playing. It seemed to me that the Ladies should be better prepared for a tournament of this level, both in terms of the chess component and that of experience. However, the outcome proved different! Although the Women’s team won convincingly on the first two days with +3 on each day, the Men’s team fought back fantastically, scoring 6 (!) consecutive wins, only losing one further round (the 9th), but then winning the vital last round to score an overall +6 (53-47) match victory! 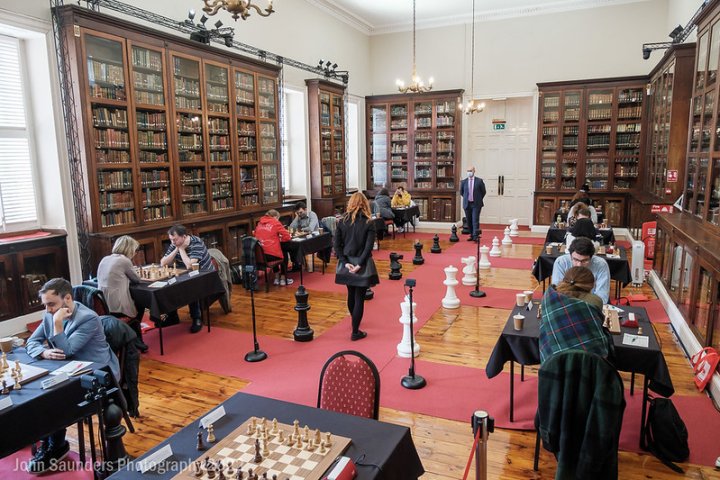 The playing hall, the Garrison Library

How did it happen? I didn’t play and not being part of either team, I could only make some observations…

The players on the Women’s Team all knew each other beforehand, as they are normally opponents throughout the year, competing against each other on the Women’s Circuit. Unlike them, the Men’s Team had players who knew very little of each other and had to build team spirit on the spot. Which situation was better? Of course, the goal was the same for both teams and they were all trying to create a friendly atmosphere, but my feeling was that the Men’s Team spirit was better – broader. I witnessed the guys sharing opening ideas, preparation material, trying to give it all for the win – the individual did not matter – there was no such thing as “I”, there was only “We”! It looked to me as though the ladies on the other hand kept a bit of distance, as in the coming months they will be competing against each other again – how much were they willing to share given the circumstances? The answer appears to be “Not enough” …

Does it mean that men are better at creating a “Team”? Of course, one cannot draw conclusions from one match only, but it has made me think that perhaps we, women, take everything more personal… Do you know any two professional female chess players who work on chess together? Have you ever witnessed two ladies going to the analysis room after finishing their game? With some notable family-based exceptions as the Polgar, Muzychuk, or Kosintseva sisters, I fail to think of any others. I have myself analyzed many of the games I played with my opponents – but they were almost exclusively men… How can we get a better understanding of our weaknesses and strengths when we don’t work together? The first thing which comes to my mind is that we are afraid to reveal our weaknesses to other ladies, we feel more comfortable doing so with men because men are perceived as stronger anyway – it is not the same to admit you’re not as strong as a man compared to admitting you’re weaker than a woman. I believe this phenomenon came about because we have two separate sections in chess from the very beginning: girls and boys. It is accepted that a 10-year-old girl might play worse than a 10-year-old boy, but my question is “Why”?

One can’t just suddenly cancel women’s chess altogether because then, for a few generations we would see no ladies competing at all, but I like the slower approach – to encourage women to compete more in mixed tournaments by offering some special conditions and prizes for the ladies – I believe that in the long run – if the most important female prizes are awarded in mixed events and not in all-female ones – this will naturally raise the level of women’s chess and perhaps, one day, there will be no need of women’s prizes at all and we could even see a lady winning the absolute World Championship title!

That was somewhat of a deviation from the subject, but I believe that this year’s innovative format of the Gibraltar Chess Festival has managed to raise some important questions and to set a great example – these types of events are exactly what we need to improve, and I have the feeling we won’t have to wait too long for that to happen if there are more tournaments like this one!

Hercules was the one to break the mountain and create two pillars. Gibraltar is the one who brought them one against the other. Who will be the one to take the gender barrier down?

The Battle of the Sexes, Gibraltar 2022 – All games of the event