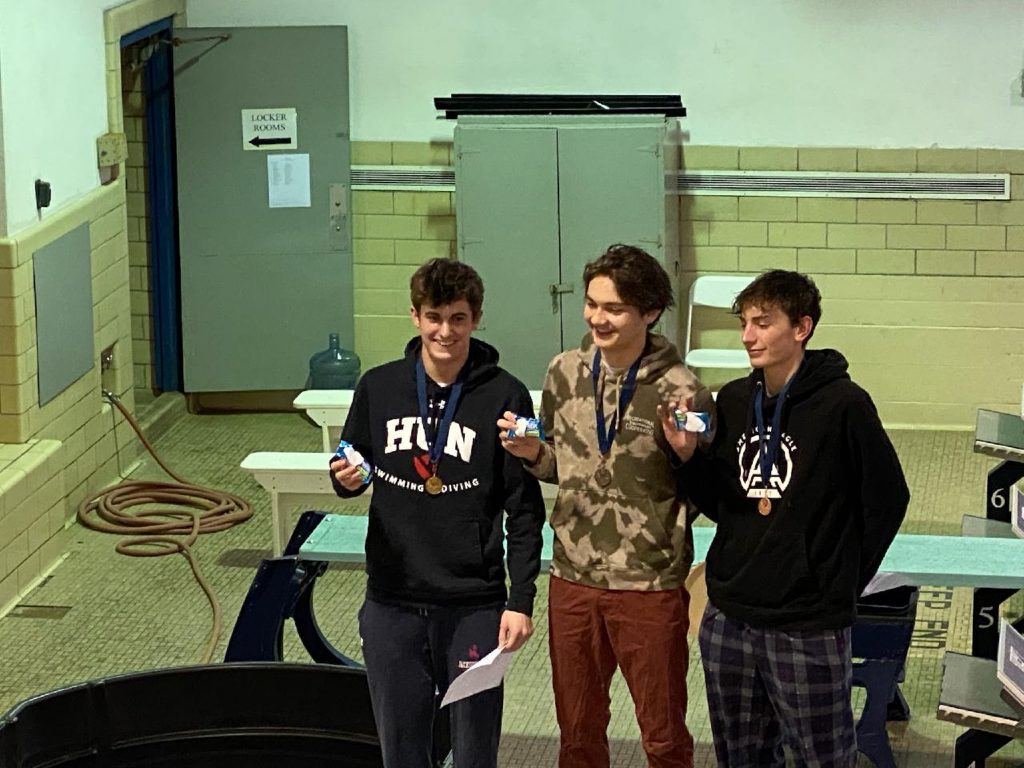 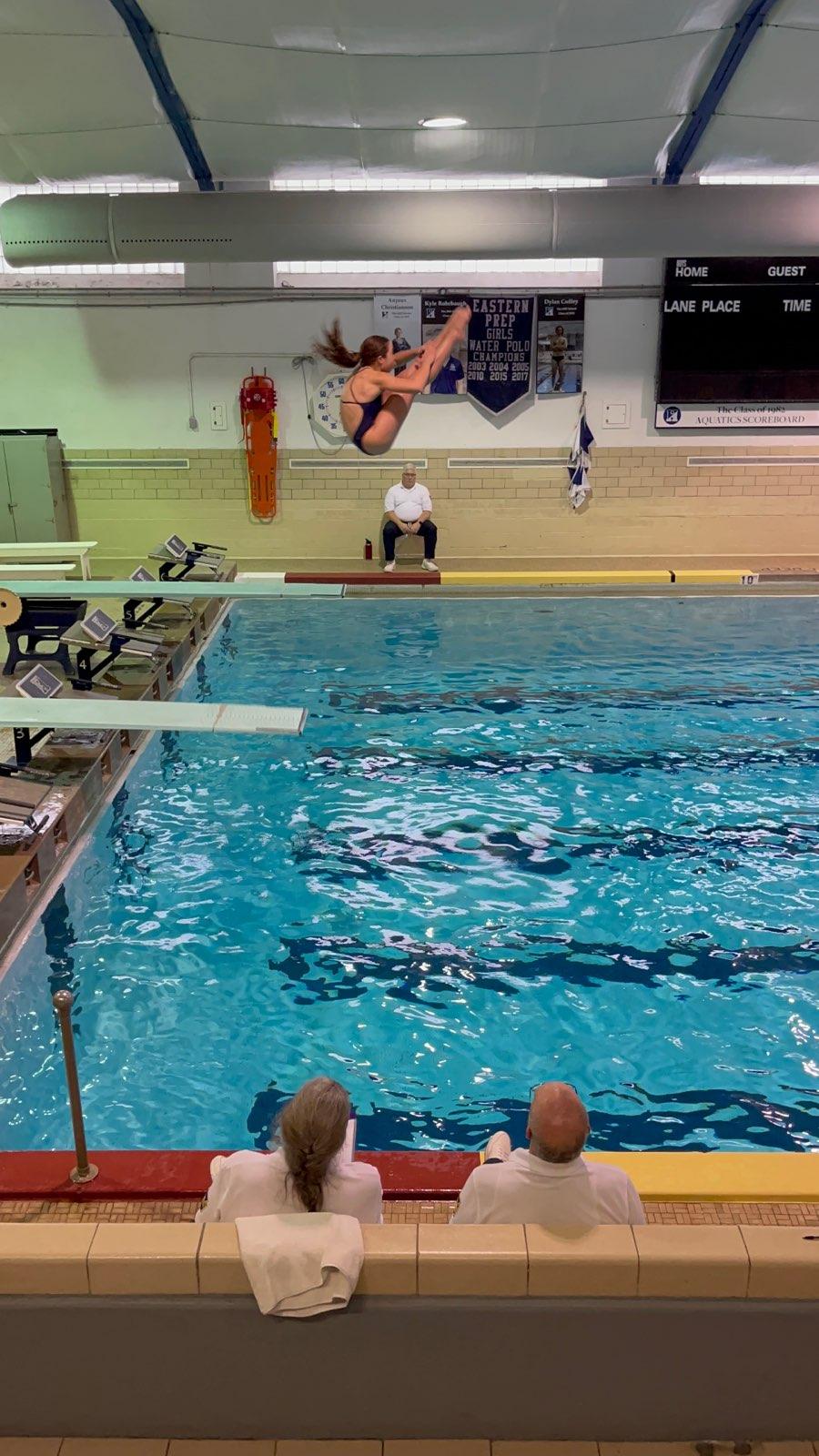 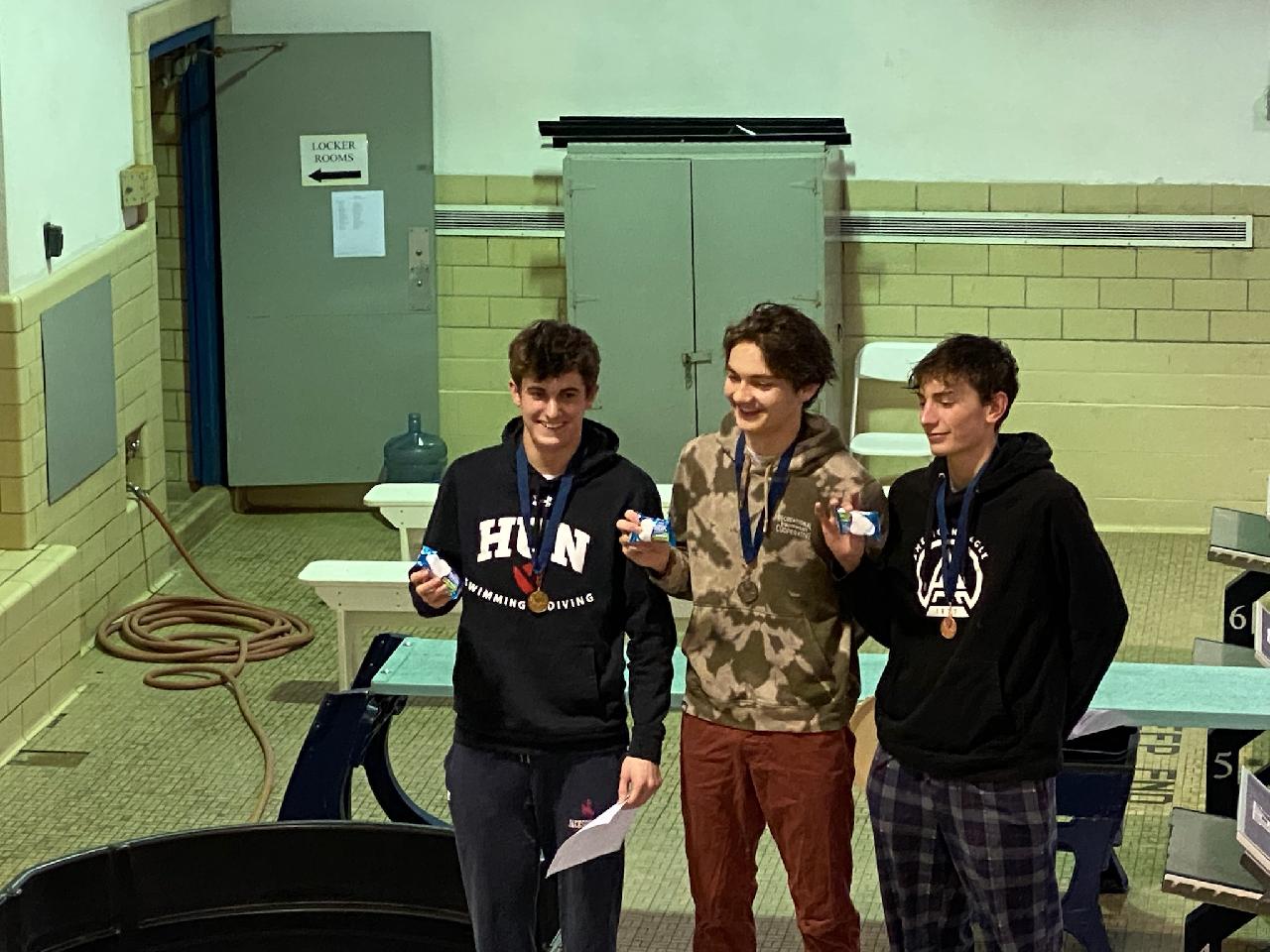 The divers each earned their first place medals in the championship dive meet that took place at The Hill School in Pottstown, Pennsylvania, on Feb. 12.

There were 21 total divers (13 girls and 8 boys) participating in the meet.

The divers had to complete 11 dives, at least two from every category: front, back, inward, reverse and twisting.

“I was kind of nervous about going into this meet because I knew a bunch of the other divers who were also top of the meet at previous meets. I wasn’t so sure about it, but I’m very happy with how I did and for doing really well,” Oster said.

Oster said one of the dives she executed during the meet was her reverse dive.

“I felt the best about my reverse dive, because I usually hit that for most meets. I also competed with a brand new dive – my front 2 1/2 on one meter. This was my first meet competing with this dive,” she said.

Oster changed only two dives on her list coming into the meet.

“This is my second 11-dive meet, so last week at Montgomery I competed front dive and this meet I tried doing that and also competed my reverse 1 1/2, those are the only ones I changed,” she said.

Oster has made improvements through the season and praised her coaches for helping her learn new dives and improve the existing dives she performs.

“Diving is challenging, fun and beautiful. My coaches and teammates have really helped me through the process,” Oster said. “I enjoy the thrill of diving and find it to be really fun and something to look forward to at the end of the day.”

Next up for Oster is competing in the Eastern Interscholastic Swimming and Diving Championships on Feb. 25-26. The event has been operating since 1935 and is one of the premier private school meets in the country, according to championship meet website.

For the boys competition, Lawver, a senior at The Hun School, secured first place with a dominating score of 549.45 against the competition. Pete Curtis of Mercersburg Academy in Mercersburg, Pennsylvania, finished second with 356.40. Leo Edmonds-Doberenz of Phoenixville High School in Phoenixville, Pennsylvania, finished in third place scoring 317.00.

“I was hoping to get first place, but I wasn’t sure who else was going to be at the meet, because it was a meet I had never been to before,” Lawver said. “I did not really have an idea where I was going to stack up against the other divers. As the meet kept going I felt pretty confident that I would be on top and I was really happy that I did.”

Lawver added that at the meet he was happy with his 2 1/2 pike.

“I was really focusing on trying to get a good hurdle and if I could do that I could put it down really well. I got the hurdle I needed and was really happy with that one,” he said.

The senior, who following graduation will head to Brown University and compete on its swimming and diving team, said he has just been in the moment this high school diving season.

“I really have not had a chance to look back and think about the fact it is my senior season, but I think after my final meet at Easterns it will definitely hit me a little bit more that it is kind of over,” Lawver said . “High school diving is really fun for me to do and I like to represent my school. I will definitely miss it once it’s over.”

For Lawver, the senior season list of dives and meet finishes have gone the way he hoped in his final high school season.

“I have really tried to be consistent in all my dives this year and I think in all my meets that I’ve had I have turned out pretty consistent lists. I am really happy with my list at MAPLs it was one of my more consistent one for the year,” he said.

“Going into Easterns I hope I can hit that one a little better. Diving is very different from a lot of sports. It is not necessarily about how strong you are or how big you are. It is about a lot of control and has a really fun feeling I don’t think any other sport can give you.”

Lawver will also be competing in the Eastern Interscholastic Swimming and Diving Championships later this month.