In partnership with Opta by Stats Perform, Alan Dymock and Ross Hamilton take a look under the hood of some striking match data to bring you the story behind Six Nations stats. Next up: ferocious France

We already knew France were a good team, sure. But until this menagerie of monsters was pitted again Ireland, we couldn’t really give them a full up-and-down.

After their 30-24 victory in Paris, we now know for sure that this team are supercharged.

Last week, we cast an eye over the ruck speed both teams had displayed in round one of the Six Nations, and Saturday’s clash was billed as something close to an unstoppable force meeting… Well, another unstoppable force. But as you can see from the graphic below, France just got the better of the boys in green.

They had more gain-line success (56% to 48%), which means getting over the gain-line, not just reaching it. They had the greater collision success (29% to 25%), which means they were dominant at the point of contact, not simply neutral.

Those collision numbers are both good for the elite end of the game, but then you add in that France had a greater number of rucks racing under 3 seconds – creating what Opta term as ‘Lightning Quick Ball’. So 61% of all France’s rucks were that fast, compared to Ireland’s 53%.

Which gives you a precise of the match. But dig into the try-scoring moments and what you find from France’s two tries, compared to Ireland’s three, is something of the sledgehammer.

What is startling is that France had a 100% gain-line success on the way to both their tries (taking five phases for the first try and two phases for the second) and an average collision success of 86%. Within rugby, that is considered an exceptional percentage.

Two of Ireland’s three tries were off first phase but the third comprised five phases, and they had a gain-line success of 40% and a collision success of just 25%. Meaning that only twice in their possession did they get beyond the gain-line.

The second of those occasions was when Jamison Gibson-Park spotted the unguarded hole and raced through for the try – an incredible play by the nine. France were posted as totally missing, a poor end to what had looked like a controlled period of defense by them.

But we are comparing the gain-line success and how consistent France’s power plays were when a try-scoring opportunity was on.

Related: Six Nations statistics: Spills and rips in the tackle

Mack Hansen’s try was a sublime individual intervention and a timely one at that. Josh van der Flier’s try from the maul was just the shove Ireland needed. Gibson-Park’s score was the clarion call for a team that was not only in the game but had serious designs on winning it.

However, when it came to try-building, through tying phases together, France really turned up the muscle. As analyst Ross Hamilton says: “Within France’s two try-scoring possessions, there was only one carry that wasn’t dominant, which was Cameron Woki’s in the build-up to the first try. But then he had support from behind to drive him over the gain-line.

“The average ruck speed for the five rucks (in seven phases) was 1.85 seconds and every single ruck was less than 3 seconds – so was quantified as lightning quick ball.”

France’s power equals pace. At the speed they generated against Ireland, there was little the defense could do. 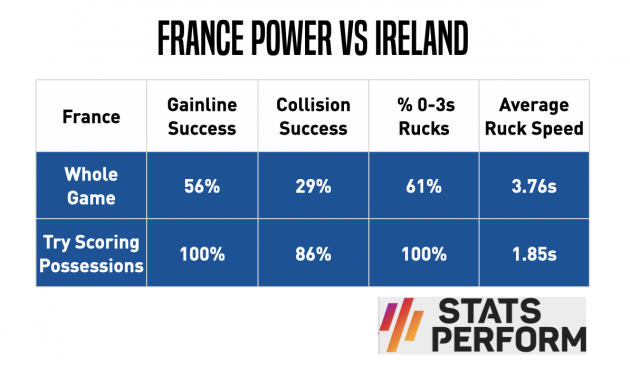 The graphic above highlights again the jump in averages when it’s try time.

But Opta give us a bit more too. You see, we would all assume the packs are the engine for so much of this. And you would be right. To an extent. But oh boy, are there some individual performances that merit credit within this.

In attack, carries from France’s front five sparked 15 lightning quick rucks (out of 21). With ball in hand, the bigger blokes in blue had 78% gain-line success. It’s also worth noting that the French front five had a 30% collision success, which doesn’t sound impressive but is actually excellent at this level.

If you want individual comparisons then take Paul Willemse, the lock. His collision success with ball in hand was at 20%, a respectable return. He had a very impressive 80% gain-line success and 60% of his carries generated rucks under 3 seconds. Beefy enough, right?

Then we get to an unsung hero. Because although he only made two ball-carries, they were biggies. He did the business in minute one for Antoine Dupont’s try and he did the job to make way for Cyril Baille’s try in the 53rd minute. Everybody, Uini Atonio.

The enormous tighthead had a collision success of 100%, a gain-line success of 100%, and both carries generated lightning quick ball. If you are only going to make two carries, make it those two. He wasn’t shy in defense either.

Of course, it’s not just the heavies who had a blast.

Gaël Fickou may not have stood out to you like a sore thumb – though Stuart Barnes did say in his Team of the Week picks that “his kicking game is now top class and caused Ireland more than a few problems” – but his stats in attack bear looking at.

Fickou made eight carries, five of which got France over the gain-line. But he also set up seven rucks and every single one of them resulted in lightning quick ball. So while having a collision success of 25% (which is slightly above average for Tests), when the team-leading center did opt to make a carry, France had rapid ball to play with every time.

As a trip to Murrayfield looms, France’s power game is something they have to maintain. But when they have it rolling, it’s pretty irresistible.