“And they’re off!!” says a voice emanating from some mythical PA system, followed, seconds later, by “Rounding the first turn, it’s ‘GoGetEm’ in the lead . † †

If you think of competition in each of the five divisions comprising the Junior International Championships (JIC), sponsored by Viking Cues, as a series of eight horse races, Stop #2 in the 2022 series is like a snapshot of the junior competitors, just after they’ve broken out of the gate and are headed into the first turn of a mile-long race. Not a lot of useful information in that snapshot in terms of how it will all play out as they round the final turn and head for home in the fall, but it’s compelling to watch as they jockey for position.

The five divisional events drew a total of 112 entrants to Diamond Billiards in Cape Coral, FL, with a great deal of crossover, including in the ProAm division, which saw nine girls from both age groups make up just over 22% of the 40- entrant Pro Amfield. As intended by JIC tournament director and On the Wire Creative Media’s Ra Hanna, this group of young competitors do not flinch at playing above their normal ‘pay grade,’ whether that be defined by age or gender. The ferocity of competition, even as viewed in the snapshot of the series’ ‘first turn,’ is fierce. None of the five winners from Stop #1 repeated as winners in Stop #2. Some of the Stop #2 winners had not chalked up a win in the first season. 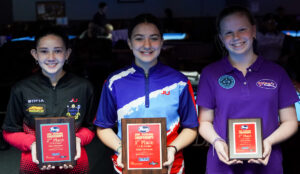 Some of the ‘ponies’ in their separate divisional races are hot on each other’s trail. In the 13 & Under Girls race, Sophia Mast and Skylar Hess are running neck and neck. They met twice in the season opener; in their opening match, won by Hess, and again, in the finals, won by Mast. They met twice last weekend, too, and once again, in their opening matches of the 10-entrant event. They fought to double hill before Mast prevailed, moving on to a winners’ side semifinal against Asia Gillespie, and from there, to the hot seat match, which she won, downing Gianna “Mini Banks” Fiore 7-5. Hess came back through five matches on the loss side, including a 7-5 win over Savannah Easton in the quarterfinals and a 7-1 victory over Fiore in the semifinals. In the finals, this time Hess prevailed 9-5. Hess was also the top finishing young woman (9-12) in the 40-entrant ProAm division (the largest field at Stop #2).

The winner and runner-up in Stop #1 of Season Two in the ProAm division (Landon Hollingsworth and Joey Tate, who were also winner and runner-up in Season 1’s 18 & Under Boys division championship) become runner-up (Tate) and among the eight competitors who tied for 17th (Hollingsworth). Trenton White, who had yet to win an event in the series (either season) went undefeated to claim the Stop #2 ProAm title. He got by five opponents, including a double hill win over Justin Toye and a winners’ side semifinal, 7-5 win over Kashton Keeton to give Joey Tate a shot at him in the hot seat match. White won their first of two rounds 7-5.

On the loss side, two veterans of the JIC series, Riley Adkins and Nathan Childress, faced each other in the quarterfinals. Childress, who’d entered last season’s 18 & Under Championships as the #1-ranked player in the division, downed Adkins 7-4 and then fell to Tate by the same score in the semifinals. White took Tate down a second time, in the finals 9-6, to claim Stop #2’s Pro Am title.

White fared well in the 18 & Under Boys division, as well, finishing in the tie for 5th/6th, but Tate went undefeated in that event and never faced White, which, from Tate’s perspective, was probably just as well. Tate advanced through to the hot seat match, where he defeated Ivo Lemon 7-5. White was eliminated in the 5th/6th matches by Hollingsworth 7-5, who went on to defeat Dustin Muir 7-3 in the quarterfinals. He was eliminated 7-4 by Lemon in the semifinals, which, again from Tate’s perspective, worked out just fine. Tate claimed the 18 & Under Boys title, downing Lemon a second time, 9-5. 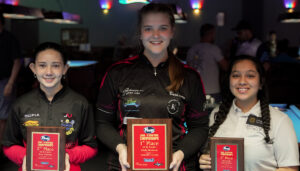 With Sofia Mast, Skylar Hess and Kennedy Meyman (winner of this division last month) in the 16-entrant, 18 & Under Girls division, they’d have shown up on a ‘toteboard’ as a group of three ‘favorites’ in Stop #2’s race. And at the end of four rounds of match play (around the final turn and headed for home), Sophia Mast was in the lead. † uhh, hot seat. She’d not faced Hess, which, from her perspective, was probably just as well, but she had sent Meyman to the loss side in the opening round, survived a winners’ side semifinal, double hill fight against Bethany Tate, and shut out April Gonzalez in the hot seat match.

Bethany Tate (15) had entered her winners’ side semifinal match against Mast, looking at the distinct possibility that she could face her 11-year-old sister, Noelle, in the hot seat match. It failed to materialize when Mast sent Bethany to the loss side and April Gonalez sent Noelle over. The sisters arrived on the loss side of the bracket at the same time, again looking at the distinct possibility of facing each other, this time in the quarterfinals. Bethany did her part, eliminating Courtney Hairfield 7-5. Noelle was eliminated by Precilia Kinsley, though not before she’d forced a 13th single game, for all of the proven marbles.

In the quarterfinals that followed, Bethany and Kinsley also battled to double hill, before Bethany prevailed, advancing to eliminate the competitor who’d sent her sister to the loss side, April Gonzalez (7-5) in the semifinals. It doesn’t take much of an imagination to see Noelle rooting for her sister to cross the finish line first, as Bethany and Sofia Mast stepped to the table for the finals. And it worked. Bethany and Mast came to within a game of double hill, but Bethany chalked up her first JIC win 9-7. 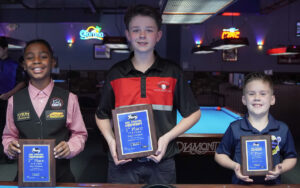 Absent last month’s winner and runner-up in the 13 & Under Boys division, Hank Leinen stepped up to go undefeated and become yet another junior competitor to win a first division event title. D’Angelo “Jaws” Spain finished as runner-up. They met first in a winners’ side semifinal, won by Leinen 7-3.

Meeting up with Leinen in the hot seat match was Roman Boone, who’d sent Gaige Wells to the loss side 7-4 in the other winners’ side semifinal. Leinen claimed the hot seat 7-2 and waited on Spain’s return from the semifinals.

On the loss side, Spain, after eliminating Landon Dunlap 7-2, advanced to a quarterfinal versus Jayce Little, who’d defeated Wells 7-1. Spain and Little locked up in a double hill fight that eventually advanced Spain to a semifinal win over Boone 7-3. The 13 & Under Boys final pitting Spain against Leinen came within a game of double hill, but in the end, Leinen edged out in front to claim the division title 9-7

Ra Hanna and all of his support ‘crew’ thanked the owners and staff at Diamond Billiards, as well as title sponsor Viking Cues. The next stop on the Junior International Championships (#3), which will see the competitors stretch their ‘legs’ through the long straightaway on the far side of the track (stops #3 through #7), is scheduled for March 25-27 and will be hosted by The Rack and Grill III in Aiken, SC.