While many may associate the thrills and adrenaline rush of fast cars zooming across pavements and asphalt with motorsport car racing, the same can be found in radio-controlled (RC) cars, a smaller yet equally thrilling form of car racing.

Going neck and neck with similarly skilled opponents in a friendly RC car race across a circuit is not lost for some, with many taking a liking to not only play, but also maintain their RC cars as a hobby.

There are a number of RC car players and communities across the nation, each specializing in a diverse selection of RC cars and tackling specific roles as well as racing and driving styles.

One such player is Haji Joe bin Haji Dollah from Belait District, who shared on how the community in Belait District was formed around RC monster trucks of one-eighth and one-tenth scales.

The RC car enthusiast said the hobby started to pick up around the late 90s to early 2000s.

“For the past 10 years, we have been using nitro fuel to run the RC monster trucks, which can be expensive. Nowadays, we use batteries that are more efficient,” said Haji Joe, who added that it was not until recently that there was a shift towards using batteries, which accelerated the hobby. 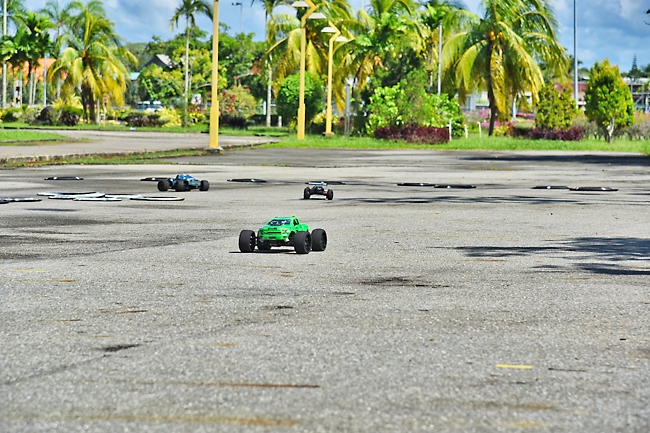 “Using batteries are a safer choice not just from a player’s perspective, but also from an environmental aspect.”

On what attracted Haji Joe and other RC car players towards the hobby, he said,” Maintaining and repairing the pocket-sized cars gives us an adrenaline rush, in addition to racing against other players.

“We mostly spend time doing the maintenance ourselves, sourcing parts from (suppliers) in the capital and online.”

On how the COVID-19 pandemic, which has been disrupting supply chains across the globe, impacted the RC car communities in playing and sourcing car parts, Haji Joe said, “The challenge is being limited to playing the RC cars at home, with uncontrollable hazards such as cars passing by and crammed spaces. Getting together with friends also happens less frequently.”

However, he added, there have been no major issues in the maintenance aspect of the hobby, especially with widely used and easily worn out parts such as tires and batteries.

“We can still purchase them from stores in the capital. The difficulty lies in ordering parts from the outside. You have to wait as some deliveries get delayed,” said Haji Joe.

On how the RC car players have adapted to changes as the nation, along with the world, slowly shift towards an early Endemic Phase, Haji Joe said, “We are now able to play in an open area. However, we do need to get permission.”

One such area favored by the RC car community in Kuala Belait is Tudong Saji, which provides a wide enough area for the players to run their RC cars at top speed, with some capable of reaching upwards 120km/hr, while having enough space to cordon off the playing area to prevent unwanted incidents.

The large area is also ideal for the implementation of social distancing measures in line with the guidelines mandated by the Ministry of Health.

With the hobby still going strong throughout the COVID-19 outbreaks over the years, Haji Joe said, “Playing RC cars is a good activity, especially for the younger generations. It helps to fill your spare time rather than doing nothing.”

On advise for those looking to start the hobby, he said,” They can look for our videos in YouTube. We also play almost daily at Tudong Saji. Visitors are welcome to come and have a look. Nearly half of the players who would come up and introduce themselves to established ties.”

Haji Joe also expressed his gratitude to the Kuala Belait and Seria Municipal Board and other agencies for being supportive by providing the area for the community.

Having big hopes for the RC community in Belait District as well as others across the nation, he said it is hoped that RC car players will continue playing in suitable locations with controllable flow of passersby and car traffic, to ensure the safety of spectators and players .