GM Hikaru Nakamura demonstrated his superiority in quicker time controls by defeating fellow-American GM Levon Aronian with a clean 2-0 score in the rapid chess tiebreak of the final to emerge as the winner of the 2022 FIDE Grand Prix first leg in Berlin. In two absorbing games in the 15+10 time control, Nakamura once again exhibited his proven abilities of quick thinking, counter-attacking sense, and defensive skills in the format to defeat Aronian convincingly.

The first game saw Nakamura accepting Aronian’s pawn sacrifice in the opening to build an advantage that lasted through the endgame, but after both players mishandled the rook ending with fluctuating fortunes, Aronian was the one to make the final error. The second game saw a desperate Aronian trying for an advantage in a must-win situation, but Nakamura cleverly created counterplay and even won the game when Aronian overextended in a drawish double-rook ending.

This concludes the first leg of the 2022 FIDE Grand Prix and leg two will commence on February 28 in Belgrade, Serbia.

At the end of the two intensely fought games, it is interesting to decipher the reason Nakamura won this tiebreak match and the reason he seems to be excelling at quicker formats of the game.

With characteristic frankness, Nakamura confessed after the match: “I am actually proud of the fact that I have not lost a rapid or blitz game for a very, very long time. I think my last loss was probably to Alireza in 2019. Like I said before, mainly, you just try to find good moves. I think the main difference is that I didn’t really feel any pressure. Even today, I was just playing. And I could definitely tell, for Levon, that he was more nervous than I was… In general, I think I played well, and it showed.”

I am actually proud of the fact that I have not lost a rapid or blitz game for a very very long time.

Jumping ahead, this ability to find good moves whenever the need arises was witnessed very early in the first game of the tiebreak:

Both the players had almost blitzed out their moves till this point, and Nakamura had a long think here, for almost five minutes. Aronian has sacrificed a pawn and has his counterplay through active pieces attacking White’s center. And this is where Nakamura’s common sense came to the fore, the ability to “just play,” with 17.axb5 axb5 18.Bd2 Nc6 19.Bf4, and White had consolidated his center.

There was one more curious statement by Nakamura: “Playing every day keeps you sharper. The question is whether you can play the opening reasonably well or not; that’s the sacrifice you make when you play. But, practically speaking, I’ve played more than anybody in the last couple of years, and I think it definitely helped.”

This ability to “keep sharper” is what stood him in good stead when both the players mishandled a drawn rook ending and Nakamura managed to create chances with the typical “hustling” with very little time on the clock:

It feels incredible now, but Nakamura actually outfoxed Aronian—a player who belongs at the very top of the chess world—and managed to win this position!

Commenting on Chess.com’s broadcast, GM Daniel Naroditsky was thrilled by Nakamura’s above swindle, proclaiming excitedly: “Levon, at several points of this game, [showed] inexplicable decision-making, time pressure or not! And this is what Hikaru does—he has made a career of this! He does this in blitz—he doesn’t play accurately all of the time, but… when push comes to shove, when the ledgers are written at the end of the day, Hikaru is the one who has the last laugh!”

…when push comes to shove, when the ledgers are written at the end of the day, Hikaru is the one who has the last laugh!”

His other phenomenal ability to withstand pressure on the board and defend a bad position was demonstrated in the second game when Aronian’s desperate probing of Black’s position was taking a potentially threatening shape:

Naroditsky had advocated pushing the black pawn with 30….a6-a5 for a long time here, dissolving the queenside and defending the only weakness in the position—on d6—doggedly to aim for a draw. But it was here that Nakamura came up with 30…Nf6-e8!?, aiming to play …f7-f5 and create counterplay targeting White’s kingside, which is quite a sedate zone right now and seemingly without chances of any “incidents.” And he produced such counterplay that he even got a bonus victory at the end of the day.

When the match actually started, there could not be any such inclination in the spectators’ eyes for one side or another, as the first game predictably started with a show of strong opening preparation from Aronian, who sacrificed a pawn from the black side of an Anti-Marshall variation of the Ruy Lopez Opening:

The back-and-forth of mistakes in the rook ending brought in the obligatory Twitter banter!

Having lost the first game in such a dramatic fashion, the onus now fell on Aronian to win the second game with white pieces, thus promising another intense clash. As the game progressed from another sedate line of the Giuoco Piano, Aronian seemed to be slowly building up the pressure:

Aronian gave full credit to Nakamura in the post-game interview: “Hikaru’s opening were never his strong point. He got himself into bad positions quite often, but he always fights. I admire that. He is defending pretty well, as the first game showed. I need to work on my technique to play better in better positions.”

When asked finally about his reaction to winning the tournament, Nakamura listed things in perspective: “It is nice to win, obviously. I think I had a little bit of luck—I got the best possible group that I could have asked for at the start, which definitely helped. I thought I played well. Not to jinx myself, but I haven’t lost a game forever! So, I am pretty happy. But this is only one tournament. Let us see how the second and third legs go.”

As ever, the internet sure had a unique way to congratulate Nakamura’s achievement. Some of them brought a perspective to his victory:

Some of them brought out a smile:

But some were so elegant that the champion had no other choice but to be equally sophisticated! 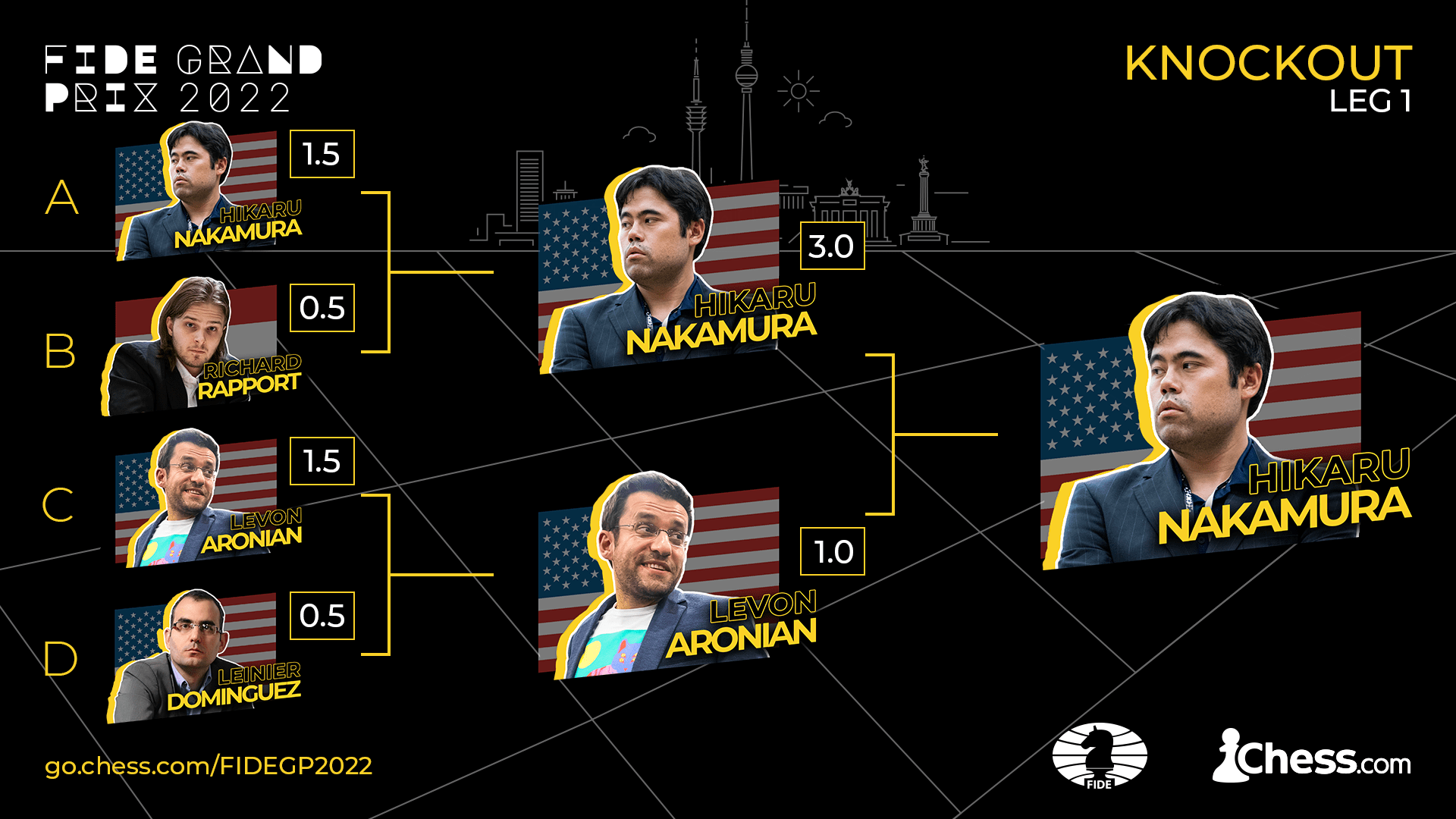 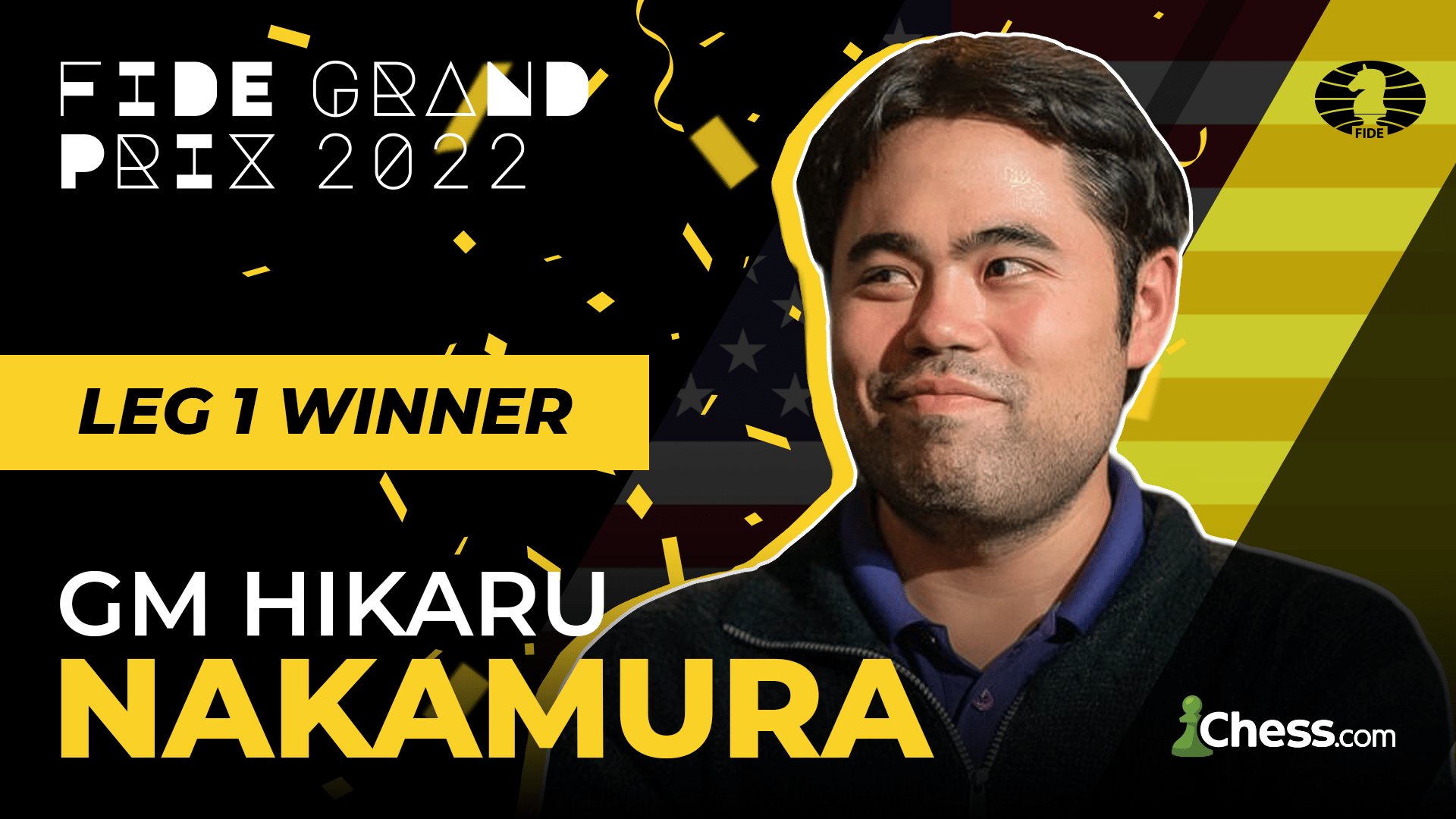 The FIDE Grand Prix Berlin is the first of three legs of the event. The Berlin tournament took place February 4-17.