Presentation Brothers College are through to the final of this year’s Pinergy Munster Schools Senior Cup after they defeated rivals Christian Brothers College 21-19 in an absorbing and dramatic encounter at Musgrave Park.

At one stage of the game, PBC were 12 points down, but they showed a lot of fight in the second half to get back into the game and ultimately, secure the victory.

In what was a tight opening five minutes, PBC began the match on the front foot as they edged the territory stakes.

Both teams had periods of possession but it was very much a case of defenses on top as both sides secured crucial turnovers in a tense opening 10 minutes.

Some great improvisation from PBC out-half Harry Coughlan saw him collect the ball under pressure and produce a perfectly weighted grubber kick which stopped just short of the CBC line. To the northside school’s credit, they did well to clear their lines as they kicked into touch.

PBC won the resulting lineout and their maul marched to just a metre or two short of their opponent’s line but Christians produced some more excellent work at the breakdown to win the turnover and relieve the pressure once again.

PBC fullback Ben O’Connor impressed throughout with a very good aerial take in the first half putting his side on the front foot.

However, it was CBC who came closest to opening the scoring as just after the 20 minute mark, winger Shane Maloney made a scything break which brought play deep into the PBC 22.

Christians went through a number of phases before Billy O’Riordan went over in the corner. However the pass to the winger was called forward by referee George Clancy.

Pres hit back straight away when a strong carry from flanker Fionn Roussel saw him tackled into touch in the CBC 22. Pres kept the pressure up with a number of carries close to the CBC line and they finally broke through the stern CBC defense when Rory O ‘Shaughnessy ran a terrific line to break through before offloading to Roussel who touched down under the posts.

Ben O’Connor’s conversion was good as PBC took a 7-0 lead.

CBC responded as they began to dominate possession.

A good carry and kick by CBC’s Billy O’Riordan ricocheted and was caught by a PBC player in an offside position. CBC then went to their maul from the resulting penalty as Pres began to leak penalties.

CBC kept up the pressure and went through a series of close range carries as a fizzing pass to Matthew O’Callaghan saw the outside center stopped just short of the line.

CBC weren’t to be denied as just moments later scrum half Jack Casey spotted the smallest of gaps close to the ruck as he reached over and planted the ball on the line. Daire Burke’s conversion went through the posts to level the game in what was the final play of the first half.

The second half began with CBC applying more pressure but a huge turnover from PBC’s O’Connor thwarted some early Christians pressure.

A lost lineout on PBC’s own throw resulted in a period of CBC pressure which would ultimately lead to another try. It all started with a CBC kick for the posts which drifted to the wide and right. However, the ball was then knocked on by a PBC player which gave their opponents a big opportunity with the 5m scrum.

A number of close range carries resulted from the setpiece before Burke put in a perfectly executed crossfield kick which saw fullback Benjamin Lynch reach into the air, collect the ball and ground it to the delight of the CBC supporters.

Burke conversion was wide as CBC took a 12-7 lead.

PBC’s O’Connor looked to respond for his team when he made a brilliant break up the far touchline, however, his offload attempt was intercepted which brought play back into his side’s own 22.

From this passage of play CBC out-half Burke dived for the line and some tired PBC defending couldn’t keep him out. Burke’s conversion saw CBC go 19-7 ahead with just about 10 minutes to go. 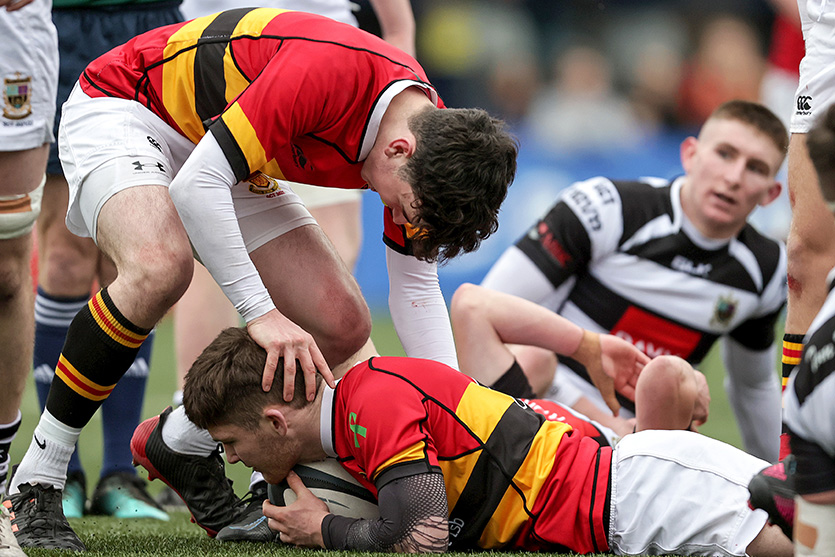 PBC responded as they went down the other end of the pitch and went through a series of close-range carries before a floating pass from O’Connor found Sean Condon who went over in the corner.

O’Connor’s excellent touchline conversion sailed through the posts to leave the score 19-14 to CBC with five minutes remaining.

O’Connor then produced a long-range kick into the CBC 22 which was collected by a Christians player but good pressure saw him tackled into touch which have PBC a big platform to launch an attack.

A number of carries brought play close to the CBC line before O’Connor received an offload and was able to cross for a try which leveled the game. The talented fullback then kicked the conversion from a tight angle to put his side two points up.

With PBC two points up, the game resumed and CBC managed to regain possession from the kick-off. However, a loose pass saw a CBC player isolated which resulted in the a turnover and the end of the game.

PBC now await the winners of the other semi-final between Crescent College Comprehensive and Bandon Grammar School.