wow! The last round of the FIDE Grand Prix Belgrade pool phase turned out to be everything we could have hoped for or more.

In Group A, GM Dmitry Andreikin emerged as the victor after winning a turbulent game. GM Anish Giri punched his ticket to the semifinals from Group B by holding a fairly solid draw as Black. From Group C, GM Richard Rapport had put himself in the perfect situation ahead of the last round where he, with a very safe draw with the white pieces, repeated his semifinal place from Berlin. In the last group, the closest of all the pools, both games were incredibly tense, but in the end, GM Maxime Vachier-Lagrave squeezed through.

Ahead of today’s round, Andreikin and GM Sam Shankland were leading with 3/5, with GM Etienne Bacrot only half a point behind, while GM Alexander Grischuk was entirely out of contention with only 1.5 points.

With Grischuk playing Shankland with the white pieces, he could have acted as a spoiler, assisting his countryman Andreikin in the next round, by beating Shankland. Shankland, understanding the need for possibly having to play for a win if Andreikin got a good position, chose the Sicilian Defense rather than his usual Berlin Defense against the Ruy Lopez, where White more or less can force a draw if he so desires. In response, Grischuk stepped away from the Open Sicilian and instead opted for the more solid Moscow Variation (3.Bb5+).

While Shankland played the combative 3…Nd7, it was Grischuk who first side-stepped the main line with his 10.Qd3, only to be met by Shankland’s 12…b5!?, a novelty and clean equalizer. Soon the players started chopping wood and a draw was agreed upon.

In the second game, Andreikin was playing the white pieces against Bacrot, having some ability to control his own fate, and opened with 1.d4 to which Bacrot answered with the solid Queen’s Gambit Accepted, possibly hoping to utilize whatever counter-chances that might occur in Andreikin’s pursuit for a win. However, it seemed clear that it was White who was pushing, although never having anything substantial. That remained the case until after Black’s 24th move where Andreikin stood at a crossroads: take a small, clear, but probably insufficient-to-win advantage or attempt a speculative queen sacrifice. Andreikin went for the latter which, after Bacrot’s nervous response, instantly gave White winning chances if not an outright winning position. That was, however, only the beginning of more whiplash-inducing twists and turns, ups and downs, than a Six Flags rollercoaster. Both players had winning positions along the way and there were more mistakes and gaffes than a GothamChess “Guess The Elo” episode on YouTube. To get the full picture, enjoy GM Dejan Bojkov’s annotations below.

With these results in place, Andreikin moves forward to the semifinals.

In Group B, Giri took a lead of a full point into the last round but faced GM Nikita Vitiugov who, with a win, playing the white pieces, could secure a tiebreak against Giri. Interestingly, Vitiugov chose to play the English Opening, 1.c4, trying to steer Giri away from the heaviest part of the opening preparation and into the territory where both would have to think on their own. Through a transposition, the players entered something akin to the Dubov Variation of the Tarrasch Queen’s Gambit, a sharp line that can lead to massive complications but occasionally results in a lot of exchanges and equal endgames. While White had some pressure and pushed for a while, it never seemed like Giri was in serious trouble.

With this outcome, Giri secured his spot in the semifinal.

In the other game, GM Pentala Harikrishna had white against the young Iranian GM Amin Tabatabaei. Tabatabaei opted for the Open Ruy Lopez which has been surprisingly popular in this event. Harikrishna went for a line where he sacrifices the exchange for a pawn and the bishop pair, but where the queens get exchanged. The resulting positions can be quite tricky for Black to play as it is difficult to find a use for Black’s rooks with only one open file and no entry squares.

In the early middlegame, White started struggling to find the right plan and that allowed Tabatabaei to take over the initiative and gain an advantage. Methodically, he made it grow bigger and bigger, ultimately gaining a decisive advantage. Then, in time trouble, he started playing sloppily, which allowed Harikrishna back into the game, but a couple of further mistakes from White allowed Black to secure the full point. A wonderful conclusion to the tournament for the young Iranian grandmaster.

After yesterday’s win against GM Vidit Gujrathi, Rapport took a full-point lead into today’s round.

With the white pieces, Rapport chose to stay away from the sharp lines that GM Alexei Shirov frequently employs and instead played 1.c4. In a Symmetrical English Four Knights Variation, the play resulted in a lot of pieces getting exchanged with a draw, the desired result for Rapport, allowing him to secure a spot in the semifinals. An interesting fact is that the first 23 moves were played in another game by Rapport, but where he played the black pieces!

Vidit could still be in contention for first place in the group if he could win with Black in his game against GM Vladimir Fedoseev and if Rapport would lose. Rather than opting for a sharp combative line as Black, Vidit chose the solid Petroff, which, like the Open Ruy Lopez, has been played quite frequently in this event. Fedoseev countered it with the 5.Nc3 line which has been extremely popular for quite a while.

Vidit played very aggressively and completely took over the initiative and soon was clearly better, possibly missing a win. After letting go of the advantage, he pressed on and developed an advantage anew, only to make a very strange decision on move 45, allowing White to capture the h6-pawn with a check, after which he had to play accurately to hold the draw . A great fighting game, particularly considering how little was at stake.

In Group D, GM Maxime Vachier-Lagrave took a half-point lead into the last round of the pool play. GM Shakhriyar Mamedyarov and GM Yu Yangyi were chasing him.

MVL had the black pieces against Mamedyarov, who knew his task: win with White to secure at least a share of first place. MVL similarly knew his task: a draw would secure at least a tied first place, whereas a win would mean a direct spot in the semifinals. With that background, the game did not disappoint.
In an Exchange Variation of the Queen’s Gambit Declined, the players casted in opposite directions, setting the stage for the required tension for such an important game. Initially, it looked like MVL would not have any problems, but then Mamedyarov redirected his queen from c2 via a4, d7, and f5 to g4, when all of a sudden it looked like the Frenchman would be in some trouble. However, his 23…b3! helped generate just enough counterplay to keep the balance. In the end, Mamedyarov had to adjust his ambitions and allow a repetition of moves.

In the other game, Yu Yangyi was facing a similar task to Mamedyarov: win with White, although his task, at least on paper, was a little easier as he was playing the tail-ender, GM Aleksandr Predke. Although White seemed to get a beautiful position and upper hand in a Closed Variation of the Ruy Lopez, Black fought like he was the one battling for a playoff spot. Around move 30, the pendulum swung in Black’s direction, but in time trouble, he did not find the best moves every time, nor did White for that matter, so the evaluation needle zoomed up and down next to the board, undoubtedly keeping MVL’s blood pressure consistently high and the commentators, GM Benjamin Bok and WGM Keti Tsatsalashvili, busy trying to explain what on earth was happening. In the end, however, Predke secured the full point. 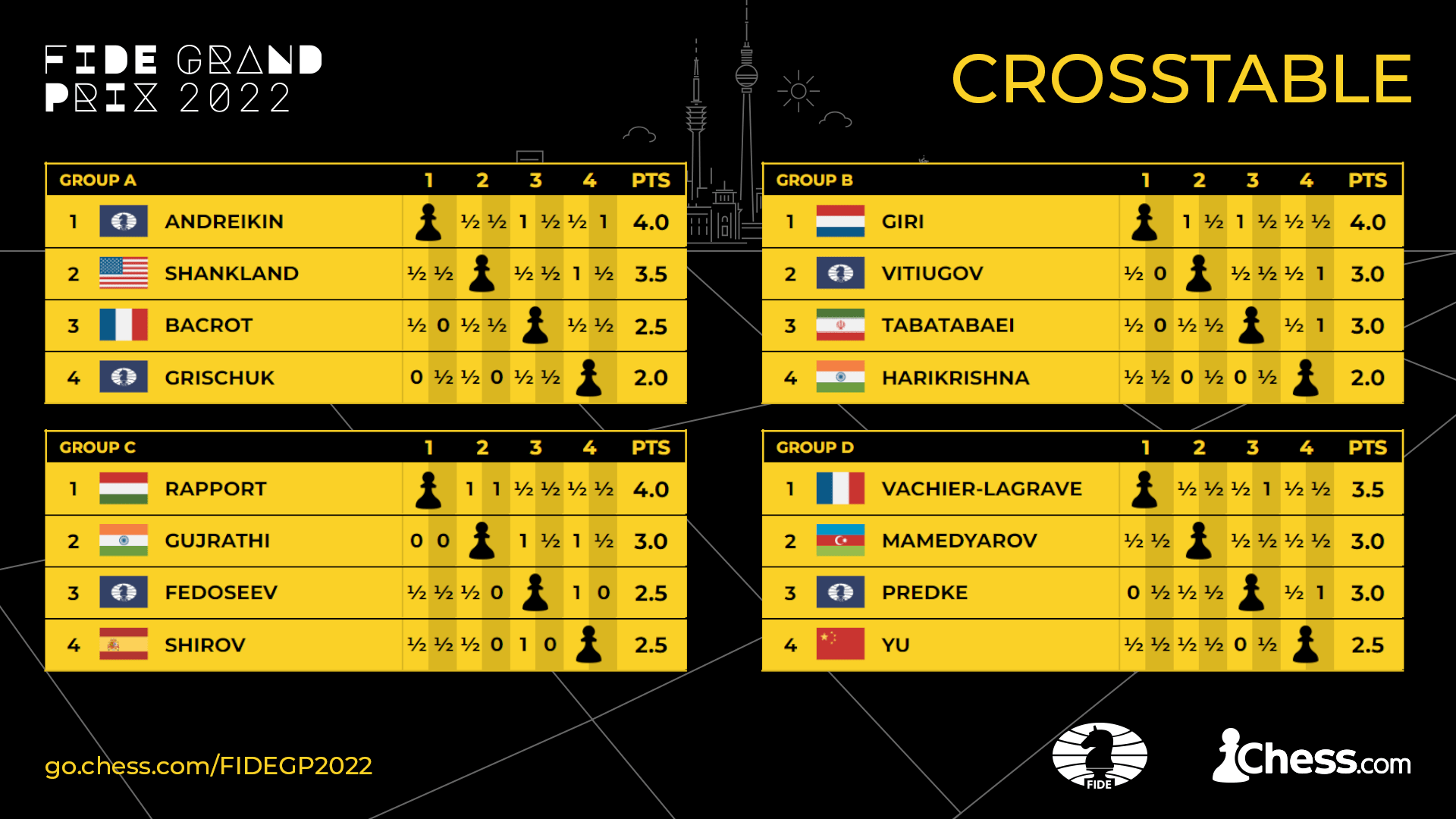 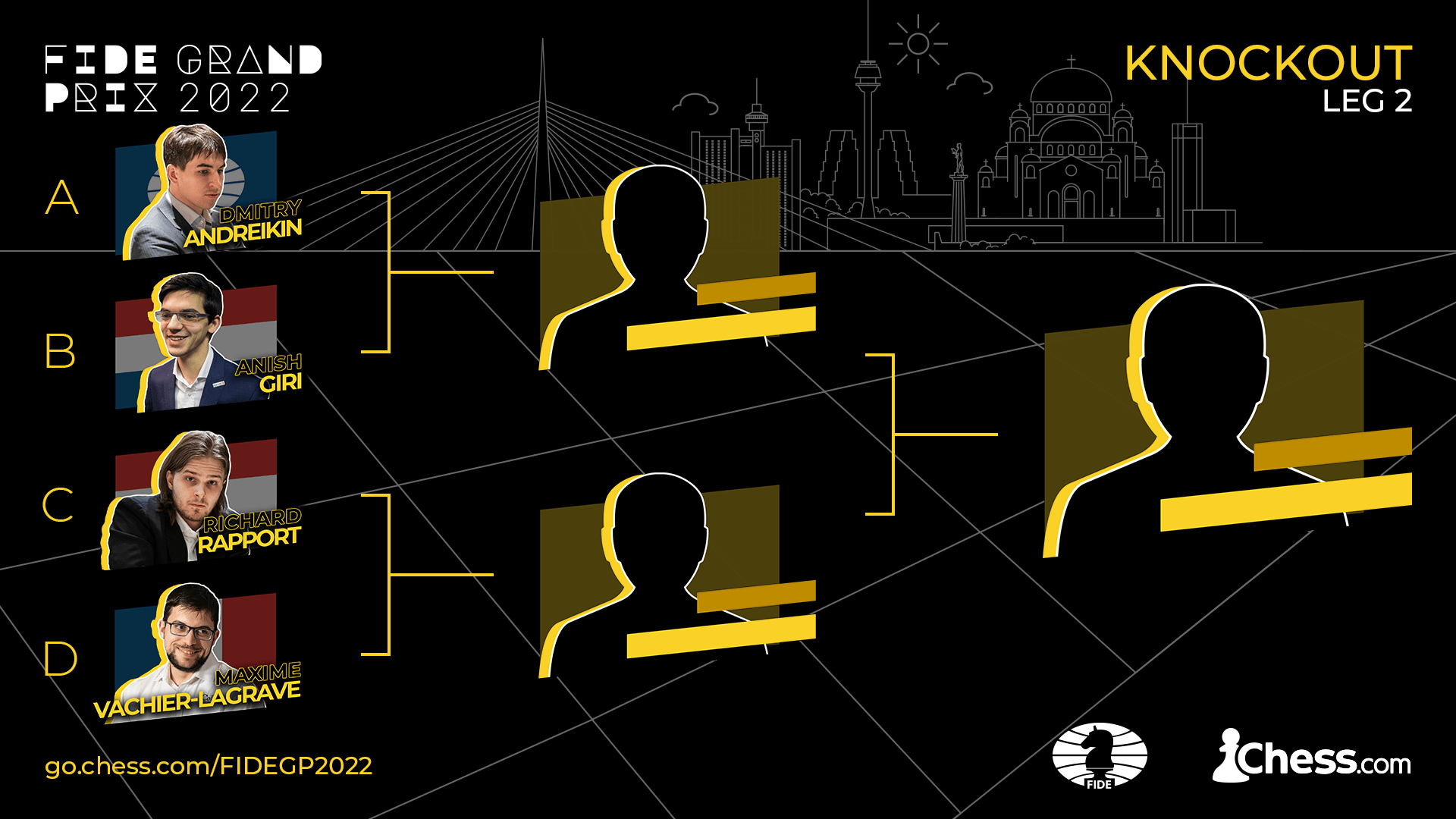