West Monroe, LA was the place to be this past week for the 5th Annual Scotty Townsend Memorial Pool Tournament. It was hosted by owner Josh Hoff at Arena Billiards.

The six-day poolfest started Tuesday evening with an auction and players meeting for the $7000 added Pro One Pocket event. Although the field only had eleven players, there wasn’t a lightweight in the bunch! Each paid $1000 to compete in this double elimination race to four event. Finals was to be one set – race to six.

Garcia, Calderon, Corteza, Chohan and Pagulayan drew the coveted byes. Frost and Morra, Biado and Woodward plus Compton and Gomez all battled down to the wire with Frost, Biado and Compton claiming victory 4-3.

Second round matches saw Frost edging out Garcia as did Calderon over Biado – each match also 4-3. Pagulayan defeated the always tough Chohan 4-2 and Compton skunked Corteza 4-0.

Down to four on the winners side, Frost pummeled Calderon and Pagulayan did the same to Compton with identical scores of 4-1. Compton and Calderon headed west while Frost and Pagulayan awaited the hot seat match.

Working their way through the one loss side of the chart, Woodward and Biado emerged to play each other. Carlo easily defeated Sky 4-1 leaving him with a fourth place finish.

The following day, fighting tooth and nail, Frost and Pagulayan battled it out in the hot seat match. Scott emerged the victor 4-3 locking up his seat in the finals. Alex had to play Carlo for the other berth.

Not to be denied another shot at Frost, Pagulayan defeated Carlo 4-2 leaving Carlo in third place.

As mentioned previously, the finals would be one set – race to six. Taking no prisoners, Alex smoked Scott 6-2 to claim the title!

Running into Roberto Gomez, they battled it out but licking his wounds, Alex took him down too – final score 9-7. Not getting any easier, Singapore’s Aloysius Yapp was next. Hey fell too – 9-4! Then, Hong Kong’s Robbie Capito fought hard but he also lost – 9-7. Alex had arrived at the hot seat match.

Meanwhile, on the lower portion of the bracket, Joe Keith of Dyersburgh, TN, was slowly working his way through the mine fields! After initially drawing a bye in the first round and having a no-show in the second, Joe defeated Ceza Mungal 9-5, Eric Alcinena and Mark Krech – both 9-2 – before meeting Lee Vann Corteza.

They went down to the end but Joe pulled out a 9-7 victory! Sergio Rivas was next and Joe won 9-6. He had arrived at the hot seat match!

Hot seat action was pretty much all Alex as he sent Joe west with a score of 9-3. Joe headed west to await the results of the Capito-Rivas match.

This was a tough one too but when the smoke cleared, it was Robbie over Sergio 7-5. Capito and Keith were to cross swords to see who’d face Alex in the finals!

Joe Keith’s Cinderella story was not to be…Robbie Capito defeated him 9-3 to move into the finals against Alex. Joe finished in a solid third place for the event.

Only twenty years old and a former junior champion, Robbie would have to defeat the Lion twice to take the title.

The match started out neck and neck until Capito pulled out to an 8-3 lead! He was on the hill and breaking!

What a great finals! Congratulations to Alex for taking both the nine ball and the one pocket events as well as splitting the 10 ball mini!

While the Open 9 Ball was in progress, the $1,000 added Women’s 9 Ball event began. Twenty eight ladies posted their $100 entry fees into this double elimination, alternate break event – ​​races were also 7/5. 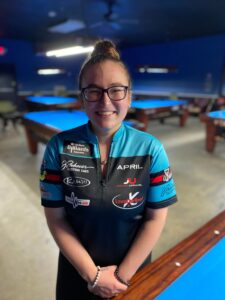 Thanks again to owner Josh Hoff and his staff for going the extra mile to make everyone feel at home while Tournament Director Jason Hill kept things running smoothly.

Our next stop is the Midwest Open Billiards Championships at Michael’s Billiards in Fairfield, OH. Dates are March 15th-20th† Hope to see you there!!!