Moment man narrowly avoids being run down by a 200,000-ton CARGO SHIP in Southampton as after the engine on his dinghy broke down

By Matthew Lodge For Mailonline

This is the terrifying moment a reveller at sea dices with death as he narrowly avoids being mowed down by a huge cargo ship weighing 200,000 tonnes.

The man can be seen swimming for his life as the massive container ship sails at speed straight towards him in the scary encounter.

With just seconds to spare, the man managed to frantically swim just far away enough from the path of the Al Zubara ship to escape with his life.

Onlookers said the reveller ‘had a deathwish’ as ​​he was caught out in the middle of the main shipping channel today just off Southampton, Hampshire.

The incident unfolded just before 10am in Southampton Waters, with the 400 metre-long Al Zubara setting sail from the port on a journey to Le Havre in France.

Passengers on a car ferry coming into Southampton at the same time watched on in horror. 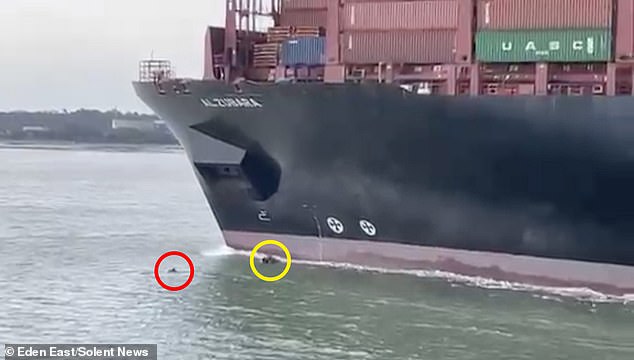 The boat (circled in yellow) gets dragged under the massive cargo ship, while the man (circled in red) escapes with moments to spare

Student Eden East, 18, who filmed the footage, said the man was with two friends – who were on another dinghy – and could not start the engine of his boat when the Maltese ship came hurtling towards him.

Mr East said: ‘We were just coming in and saw a massive container ship coming towards us.

‘We could see this one boat out there and I thought to myself ‘he’s a bit brave’.

He obviously didn’t see it coming.

‘Once he did see it you could see him start panicking and trying to start the engine on his dinghy – but it wouldn’t start so just jumped in.

‘I’m not sure how he made it. His boat got sucked under and was thrown up on the other side.

“I was really scared for this guy, I felt sick.”

Mr East said the man’s two friends, who can be seen escaping in the other dinghy, retrieved him from the water.

Mr East, from East Cowes on the Isle of Wight, also said the Red Funnel car ferry he was traveling on had to stop and carry out man-overboard procedures.