DUXBURY – Aerosmith guitarist Joe Perry has found a buyer for his Duxbury mansion.

Perry’s 7-acre gated estate at 1405 Tremont St. was priced at $4.5 million and is under contract to sell, according to its listing on the Massachusetts-based MLS Property Information Network.

The final sale price will not be available until the deal closes.

After living in Duxbury for 33 years, Perry listed the 7,000-square-foot luxury property this past September. Known as Brook Haven Farm, the 14-room home features a heated pool in the shape of a Gibson guitar body, a rooftop garden, eight bathrooms, a three-stall barn, a high-tech media room, exposed beams, three fireplaces, a gym and a billiards room.

A lavish list to lust after:20 most expensive South Shore homes recently sold

A door off the spacious kitchen leads to the Boneyard, Perry’s basement studio, where Aerosmith recorded much of the 2001 album “Just Push Play” and 2004’s “Honkin’ on Bobo.” Perry and his mates also wrote the lyrics to their hits ”Cryin’,” ”Fever” and ”Livin’ on the Edge” in his crib. Perry recorded three of his solo albums in the Boneyard.

Over the years, Perry also hosted many famous songwriters and musicians at the home, including Desmond Child, Diane Warren, Lenny Kravitz and the legendary Johnny Johnson, Chuck Berry’s piano player.

The property also boasts a three-room, one-bath detached stone-front carriage house. The MLS listing describes the grounds as “casual yet elegant” with “ethereal views of marsh and pond.”

Listing agent Janet Koelsch, or Coldwell Banker Realty in Scituate. told the Ledger in September the grounds are like “living on the edge of paradise.”

Local fans haven’t seen much of Perry in recent years. In September 2020, Perry and his wife, Billie Paulette, sold their farm in Vermont. In a 2018 interview with The Patriot Ledger, Perry said he was spending a lot of time in Los Angeles, but “our hearts are here in Duxbury.”

Throughout the pandemic, Perry, 71, has been posting updates and photos from his beach-front condo in Sarasota, Florida.

Married since 1985, the Perrys moved to Duxbury in 1988 and the couple made an indelible mark on the community. FarFar’s ice cream shop named a flavor, AeroChip, in honor of the band. The Perrys donated $25,000 to the town for an animal shelter and made the ceremonial first dig in the dirt at the groundbreaking in 2004. Perry has donated autographed guitars to the Rotary Club’s auctions and to Duxbury schools.

“The town is such a special place for the Perrys,” said Koelsch last September. “It’s where they raised their sons and they have such fond memories of Duxbury.”

Aerosmith celebrated its 50th anniversary in 2020. Besides Perry, Aerosmith consists of lead singer Steven Tyler, drummer Joey Kramer, bassist Tom Hamilton and guitarist Brad Whitford. They have won four Grammys and were inducted into the Rock and Roll Hall of Fame in 2001.

Perry and his bandmates have all called the South Shore home. At one point, Tyler, Kramer and Whitford all lived in Marshfield. Hamilton was the outlier, living in Boston and Cape Cod. Tyler and Perry equally owned a music club, Mount Blue, in Norwell in 1997.

Aerosmith is slated to play a 50th-anniversary concert Sept. 8, 2022, at Fenway Park.

Thanks to our subscribers, who help make this coverage possible. Please consider supporting quality local journalism with a Patriot Ledger subscription. Here is our latest offer. 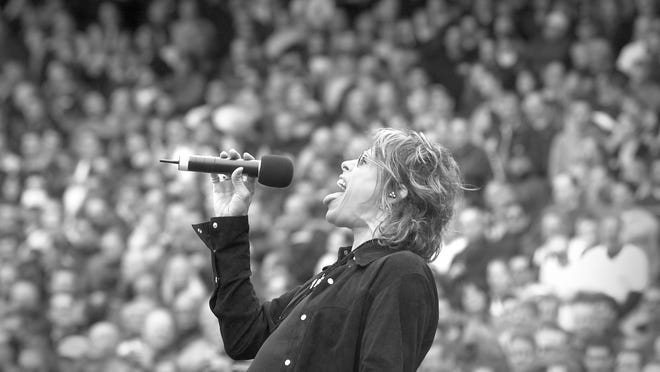