With two draws in yesterday’s games, GM Richard Rapport qualified to the final by ousting GM Maxime Vachier-Lagrave, while GM Dmitry Andreikin and GM Anish Giri booked another day of games, in a rapid chess format, to decide who would face Rapport.

Andreikin has previously proven his proficiency in matches of this format when he qualified to the final of the 2013 World Cup (and thus qualifying for the Candidates tournament). Today, once more, he showed why he is so dangerous in this format; he gets the most out of his chances, even when he has objectively worse positions, and he secured his spot in the final against Rapport.

The first game saw Andreikin play the Bishop’s Opening, 1.e4 e5 2.Bc4, something I could not find other examples of Andreikin’s previous games. Giri, on the other hand, had faced this several times before. In fact, the first eleven moves of the game followed the game between GM Adhiban Baskaran and Giri from Wijk aan Zee 2017.

Andreikin tried a new 12th move, but Black already had a fully adequate position, and after a couple of inaccuracies by Andreikin, Black had an advantage, maybe even a clear advantage. Giri, then inexplicably decided to invite to a repetition of moves, which Andreikin happily accepted.

Bok continued by saying that accepting a draw was a serious mistake by Giri.

In the second game, White played 1.e4 again, repeating his choice from the first game of the semifinal. Andreikin, likewise, repeated his choice of the Sicilian with 2…e6. Commentator Benjamin Bok was slightly surprised by this decision of Andreikin’s, as he would likely face heavy preparation by Giri, although, as Bok acknowledged, that would likely be the case no matter what he played.

Nevertheless, Andreikin has played this version of the Paulsen Sicilian, with 2…e6, 4…Nc6, and 5…a6 on several occasions in the past, both in over-the-board encounters and in online play .

On move 9, Andreikin opted for 9…Bb7, a move he has not played previously; in games against fellow Russian GMs Ian Nepomniachtchi and Vladimir Kramnik, he had given preference to 9…Be7, against which Giri undoubtedly had prepared something.

The first real departure from prior praxis was Andreikin’s 11…h5, which looked wild, but possibly he wanted to get Giri, who had barely spent any time at this point, out of his preparation.

White reacted calmly with 12.h3 and secured a solid advantage thanks to Black’s inferior piece coordination. In the middlegame, Giri seemed on the way to score a full point by breaking through on the b-file with both of his rooks, supported by his centralized knight and queen, whereas Black’s pieces looked hopelessly uncoordinated with rooks on a8 and h8, a knight on h5, a king on g8, with only the queen actively participating in the battle by storming around and trying to create a diversion.

As the clock ticked down to the last few minutes for both players, White missed several decisive moves on move 32, but mainly 32.Nb5, threatening Black’s queen and intending to jump to d6 with an irresistible attack.

This proved to be the starting point of panic for Giri, who played several subpar moves, culminating in 36.Nxg6?? which also threw away the drawing chances that would have been offered by 36.Nxf5. Admittedly, the clock situation was affecting Giri’s decision-making, several times making moves with only seconds left on the clock, and Andreikin’s very cool and incredibly strong 36…Qc6! may have been completely overlooked by Giri.

In the endgame, Andreikin converted confidently, even if he hesitated a bit to go for co-commentator Keti Tsatsalashvili’s brilliant suggestion, …Qh1+, forcing an exchange of queens, which she called for on a couple of occasions. 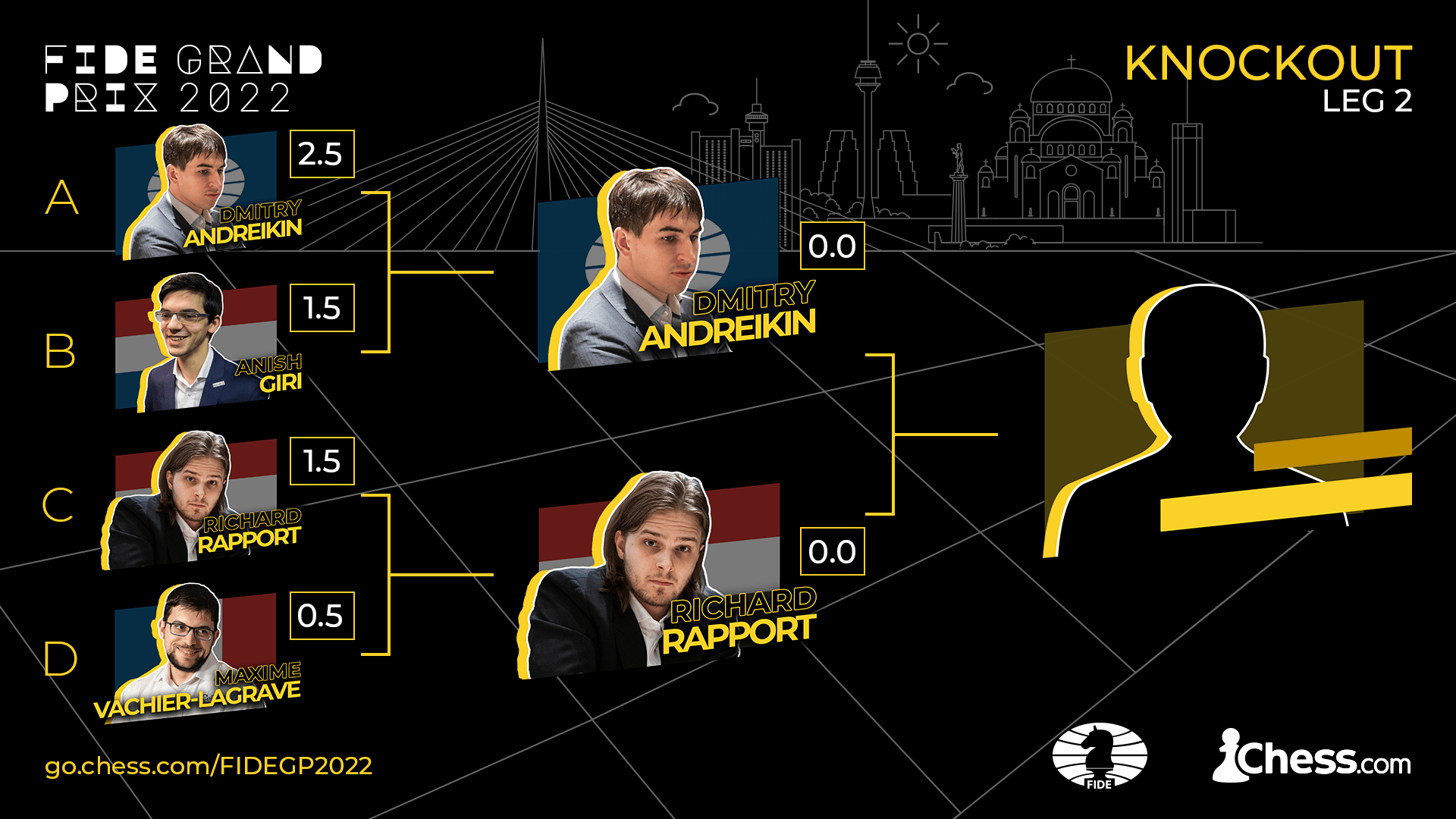