We’re excited to announce our new series of articles: Chess.com’s Club of the Month† Much like our Coach of the Month series, we’ll be highlighting the most prominent clubs on Chess.com. This series will give our readers the chance to get to know a few of the incredible communities we have on our site and get to know more about what they do and who they are.

February’s Club of the Month is the USChess club and their USChess – Members Only club. They are the official clubs for the US Chess Federation and their members-only club even runs official US Chess-rated events!

How would you describe your chess club?

US Chess: We’re a group of chess players who enjoy competing as part of a team! There’s a reason why team tournaments such as the US Amateur Team East are consistently among the most popular events on the chess calendar, and our goal is to replicate that in an online setting through country vs. country matches.

US Chess – Members Only: The club is a US Chess affiliate and holds five weekly live tournaments, with two sections each; one Open and one U-1450. The events are officially rated under the US Chess Online rating pools and will show on members’ US Chess profiles. There are 3 US Chess Online Blitz events (10+0, 5+0, and 3+2) and 1 Online Quick(rapid) each week. In addition, there is a rotation of event types on each Saturday, with two Online Blitz (10+0), one Online Quick (15+10), one Online Regular (30+0) per month, and a second 15+10 event on months with 5 Saturdays.

US Chess: We were originally founded in January 2020 to serve as a place for US Chess players to connect, play, and discuss chess. Then, in June 2020, US Chess merged with Team USA Live, which at the time was the United States’ official representative in international live chess competitions. Since then, USChess has competed in leagues such as the Live Chess World League, the Pan American Live Chess League, and the Chess.com Nations League.

US Chess – Members Only: The club started in early 2015, initially by IM Danny Rensch and three volunteer admins. The first events started in late March and through the years the number of events increased. Over the past seven years, we have held over 2,100 sections. In November-December 2020, Chess.com hosted a number of prize events and qualifier tournaments in the club to award a chance to play in a round-robin to qualify for a spot in the 2021 US Chess Championship.

What inspired you to take a leadership role in your chess club?

US Chess: There was no plan—I more or less fell into the world of live chess leagues by accident! In 2018, I was an admin for Team USA Northwest when Team USA came looking for someone to start up their live chess team. Somehow, my name was brought up, and I was lucky enough to join Team USA’s amazing admin team. By 2019, the live chess team had grown so much that we decided to form Team USA Live so that Team USA could keep its focus on daily chess competitions. About a year after that, Team USA Live merged with USChess to bring us to where we are today.

US Chess – Members Only: I was interested in helping the site hold online rated events under the US Chess online rating system.

Does your club meet in person? If so, where and when can prospective members find you? If not, when do you typically have events online?

US Chess: We play competitive live chess matches against other countries online on Chess.com almost every weekend! These matches frequently feature 50+ players on each side. In fact, the largest live chess match I’ve ever seen was a 724-player match between Team Russia and Team Ukraine for the 2020 Live Chess World League Championship. Prospective members simply need to join our club and then keep an eye out for weekly news posts announcing when our matches are going to be. 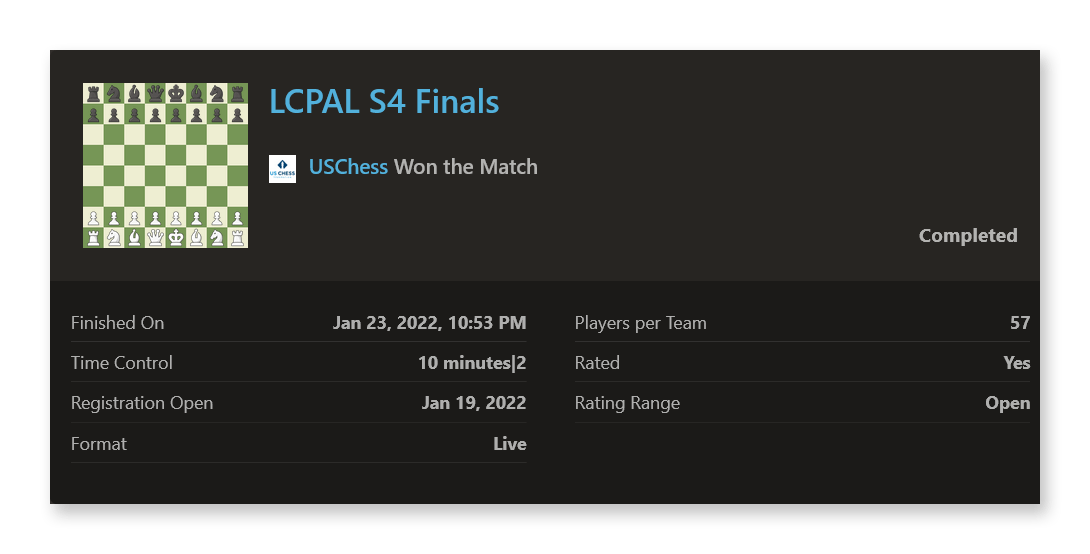 US Chess – Members Only: The club is an online-only club for official US Chess Online rated events for US Chess members.

What role do you think physical chess clubs should take as players continue to embrace online play?

US Chess: That’s an interesting question. I just directed an OTB tournament last weekend, and from the 120-player turnout we got, I think it’s safe to say that OTB chess and physical chess clubs will always be an important part of the chess world. That being said, events like Titled Tuesday, the Collegiate Chess League, or the Live Chess World League are only possible online. For me, a happy balance between OTB chess and online chess is best.

US Chess – Members Only: I think there will always be a place for players to meet across the table from other players for casual games. In addition, OTB clubs often hold officially rated OTB events and give local players a way to get experience playing face to face and with physical sets.

What separates your chess club from other clubs?

US Chess – Members Only: Other than needing a US Chess membership, the events are completely free to play and get official US Chess Online ratings.

What Chess.com tools do your members use the most? What features would you like to see from Chess.com in the future?

US Chess: As one might expect, we use the Live Chess team match feature most often. We’re pretty happy as things are—there are no glaring improvements or new features that I’ve heard suggested by our club members.

US Chess – Members Only: From a club perspective, the Online Live events are the most used, though some use is made of the club social features (notes and forums) to answer questions about OTB chess, or US Chess official rules.

What advice would you give to clubs on Chess.com that are just starting out and would like to grow?

US Chess: Focus on creating positive interactions with people. Say hello when you see members online, be as helpful as you can to new members, and try to foster a welcoming club environment. A little goes a long way.

US Chess – Members Only: Be consistent in holding events.

How can Chess.com members get involved in your club?

US Chess: Simply join the club and keep an eye out for weekly news posts announcing when our matches are!

If they’re not a US Chess federation member, consider joining by following this link.

If you’d like to nominate a Chess.com club for our next Club of the Month article, fill out the nomination form below:

If you need any help with your club, feel free to contact Andrew Schley at andrew.schley@chess.com.