COMMODORE HAYDEN BOWEN goes high for this offensive rebound during Thursday’s D-III semifinal between No. 4 VUHS and No. 1 Winooski in Barre. Bowen helped VUHS outrebound the Spartans, but Winooski prevailed on the scoreboard. Independent photo/Steve James

BARRE — Top-seeded Winooski took charge in the second period and pulled away in the second half to knock off the No. 4 Vergennes Union High School boys’ basketball team, 64-41, in a Thursday, March 10, Division III semifinal game at the Barre Auditorium. 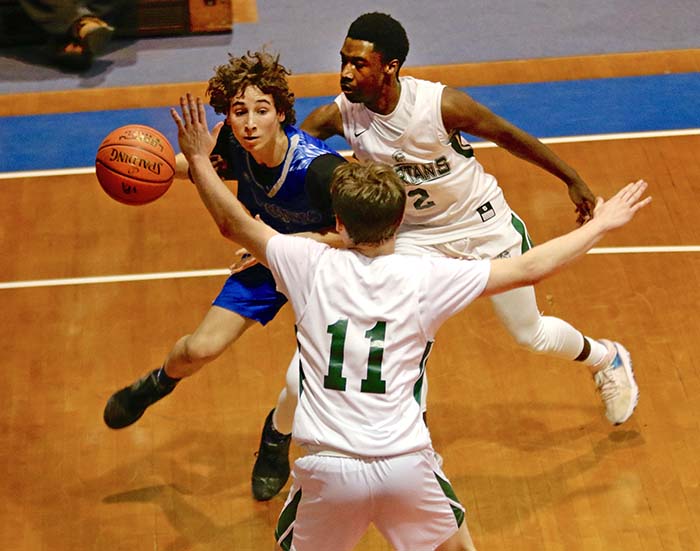 The VUHS Commodores finished a successful season at 17-8, a record compiled against almost entirely D-II teams in the competitive Lake Division. They earned the program’s most wins and reached Barre for the first time since the program competed in D-II and won the championship in 2013.

The Spartans avenged a 67-64 loss at VUHS on Feb. 26 by using a relentless full-court zone press and aggressive man-to-man defense. That forced the Commodores into an uncharacteristic 24 turnovers. 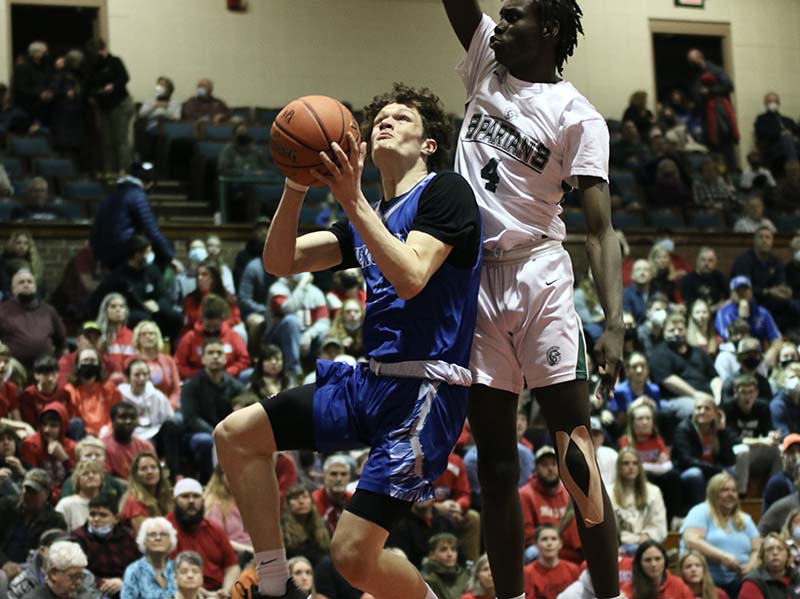 COMMODORE TYLER BERGMANS makes a move against the defense of Spartan Daniel Surma early in Thursday’s D-III semifinal in Barre. Bergmans led VUHS with 10 points in the loss to Winooski before leaving with a fourth-quarter ankle injury.
Independent photo/Steve James

A combination of strong VUHS man defense and missed Spartan layups allowed VUHS to get back into the game as Winooski suffered a scoring drought. A Tyler Bergmans drive and an Abram Francis three that beat the first-quarter buzzer made it 12-9 after one period. Tim Ashley hit a three-pointer 30 seconds into the second period to knot the score at 12-12.

Winooski buckets in the paint by Sharias McIver and Daniel Surma took the lid off the basket for the Spartans, and Francis answered at 6:35 with a transition hoop. But that was the last VUHS basket for about five minutes, while Winooski went on a key 10-0 run to make it 26-14. 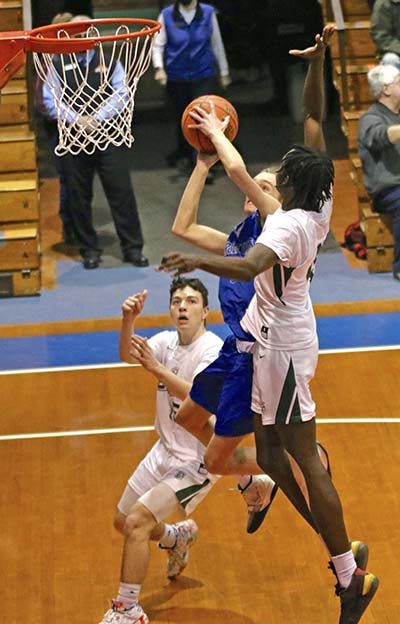 COMMODORE ABRAM FRANCIS drives for a transition hoop early in the second quarter of Thursday’s Division III semifinal in Barre. His Bucket Pulled No. 4 VUHS to within two points of No. 1 Winooski, but the Spartans soon took charge in their 64-41 win.
Independent photo/Steve James

Bradley and Ayden Johnson sparked the run with five points each, with Johnson’s coming in transition. At 1:47 Commodore Ian Henderson scored in the lane to break the VUHS ice on a nice feed from Hayden Bowen, but the Spartans outscored the Commodores as the half wound down and took a 31-18 lead into the locker room.

Bergmans opened the second half by converting a Henderson feed in the lane to cut the Winooski advantage to 11, but two straight Spartan hoops made it 35-20. Ashley swished a three with three minutes gone to give VUHS hope, but then came a crucial stretch.

Bradley hit a free throw, followed by McIver three-pointers on consecutive trips down the floor. Suddenly the lead was 19 halfway through the third quarter.

Bergmans and Henderson led a mini rally that cut the lead to 44-29 after three, but Winooski outscored the Commodores 7-2 in the first minute of the third quarter — a Johnson jumper, a McIver three and a Bradley midcourt steal and a layup offset only by an Elijah Duprey bucket. The Spartan lead had grown to 20.

To add injury to insult, a minute later Bergmans, the team’s leading rebounder and floor general, hobbled off the court with a sprained ankle. As good a season as the Commodores had, this wasn’t their night.

Bradley finished with 28 points for the Spartans, McIver scored 14, and Johnson added 11.

In Thursday’s other semifinal in Barre, Hazen rallied late to edge No. 3 Williamstown, 48-45. In Saturday’s final, Winooski will be making its first appearance in a final since winning the D-III title in 2011. 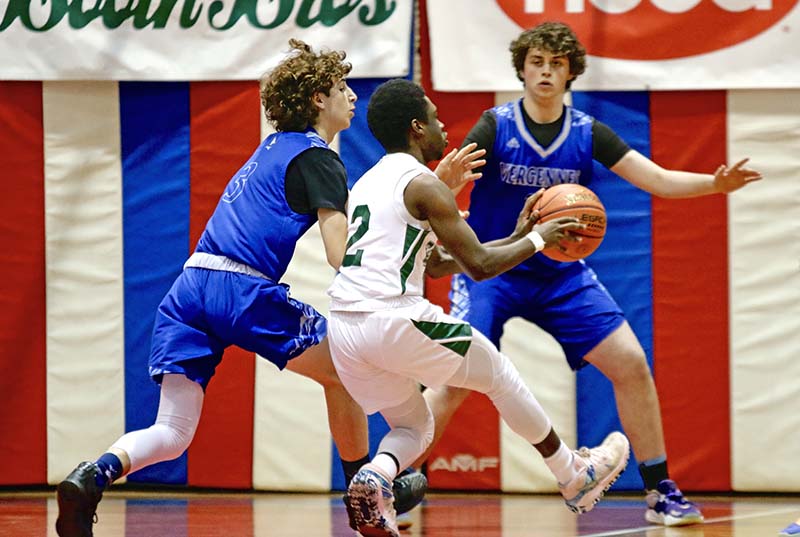