There were signs the Irish Brexit row may about to be solved after Boris Johnson enjoyed a cracking game of rugby with Irish Taoiseach Micheal Martin as England lost to Ireland today.

It came after the two leaders spoke in London about the Ukraine crisis and the Northern Ireland Protocol.

The Six Nations match at Twickenham finished 15-32 with the game hugely affected by a red card just 82 seconds into the game for England star Charlie Ewels after a head-on-head collision.

The two world leaders seemed to enjoy themselves for most of the match, which remained tied at 15-15 until the last quarter of an hour.

The leaders are believed to have discussed Irish and British relations and the humanitarian crisis in Ukraine as Mr Martin visits the UK as part of a program of events to mark St Patrick’s Day on March 17.

Speaking to reporters at the Embassy of Ireland in London, Mr Martin said the Irish government has good channels of communication with all parties in Northern Ireland. 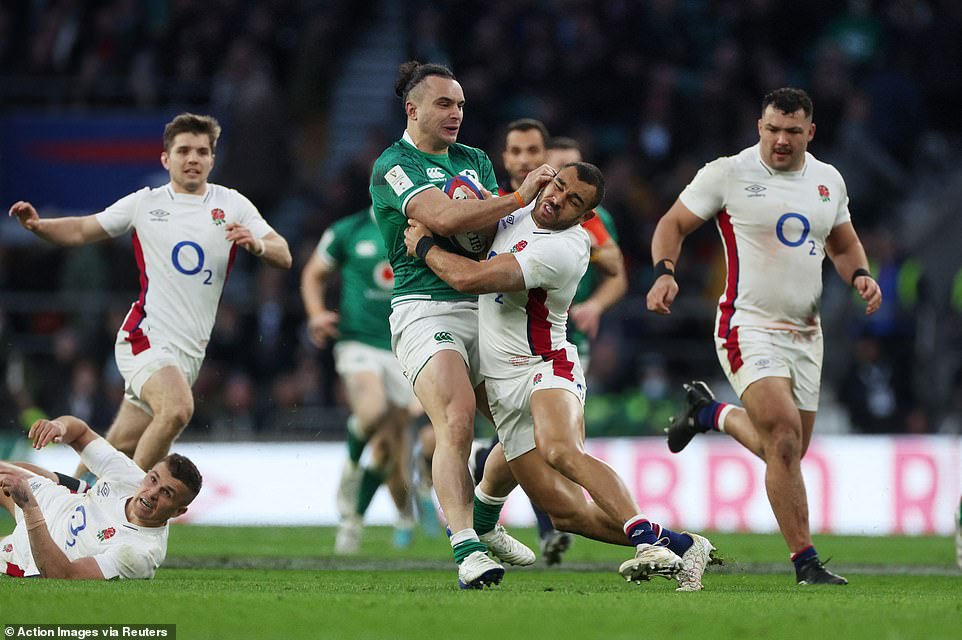 The Six Nations match at Twickenham finished 15-32 with the game hugely affected by a red card just 82 seconds into the game for England star Charlie Ewels after a head-on-head collision. Pictured: Ireland’s James Lowe in action with England’s Joe Marchant 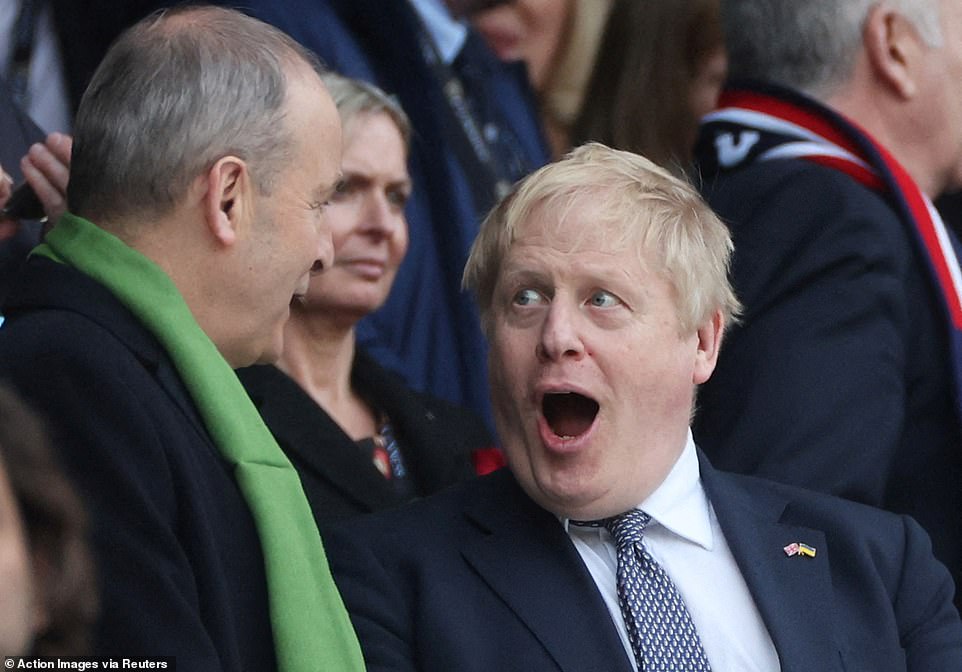 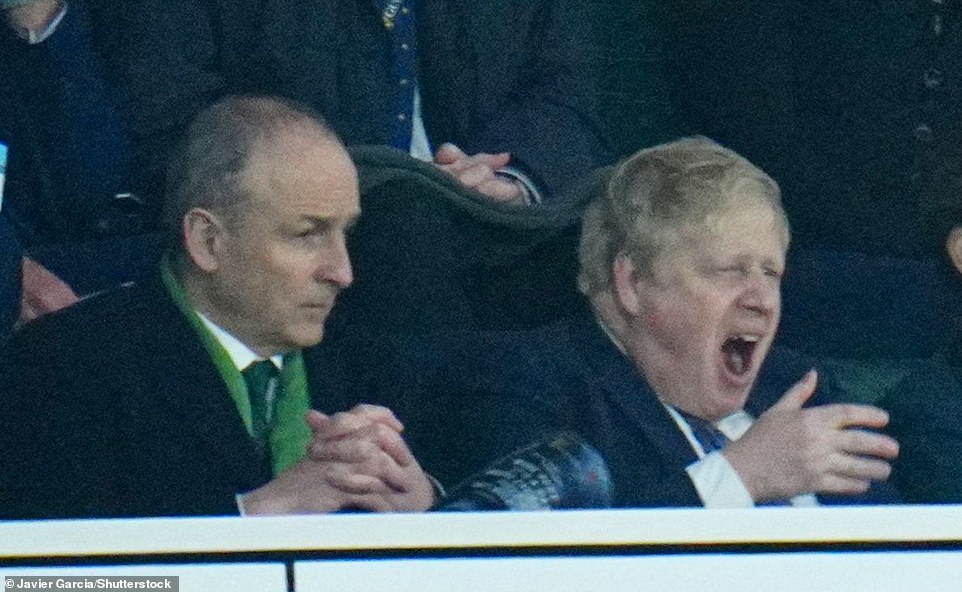 ‘So anybody I’ve met in Northern Ireland all want to continue access to the EU single market. It’s a good basic principle to start off on. And my view, given the improved relationship between the UK and the EU as a result of the partnership on Ukraine, I would like to think that in the fullness of time we will be able to resolve this issue.

‘But we’ll take it step by step. And there’s a channel there between the European Union and the United Kingdom that’s ongoing and we’re going to take this step by step.’

Sir Jeffrey was applauded at Crossgar Orange Hall on Friday night as he said his party would not re-enter the Stormont Executive until the Government acts to ‘protect Northern Ireland within the United Kingdom’.

Paul Givan resigned as first minister earlier this year as part of the DUP’s action against the protocol in a move which also removed deputy first minister Michelle O’Neill from the joint office.

Meanwhile Boris Johnson told the Irish premier he hopes the ‘same spirit of co-operation’ the UK and EU have shared during the Ukraine crisis can be applied to Brexit discussions. 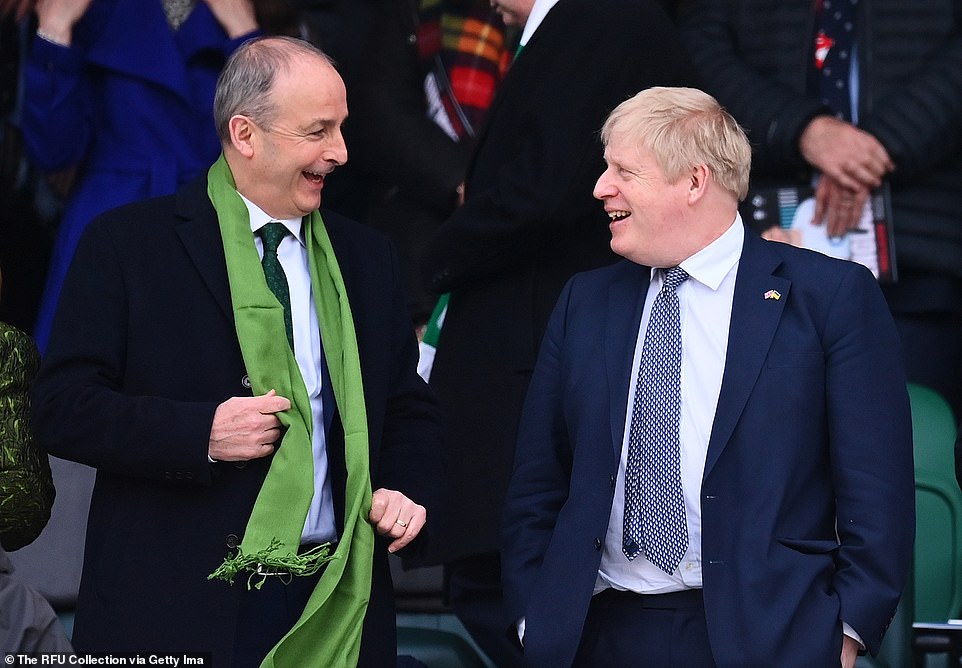 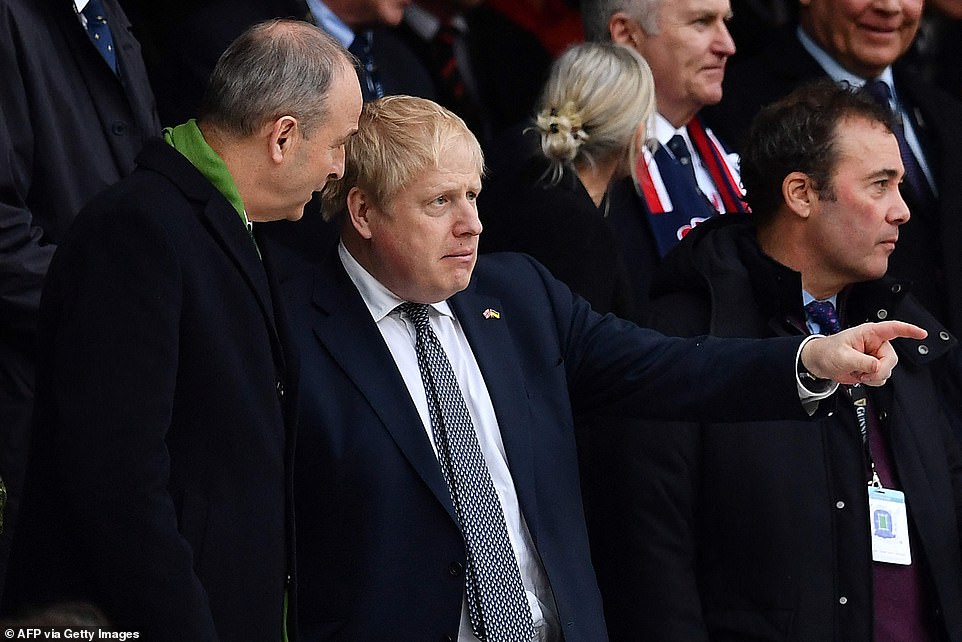 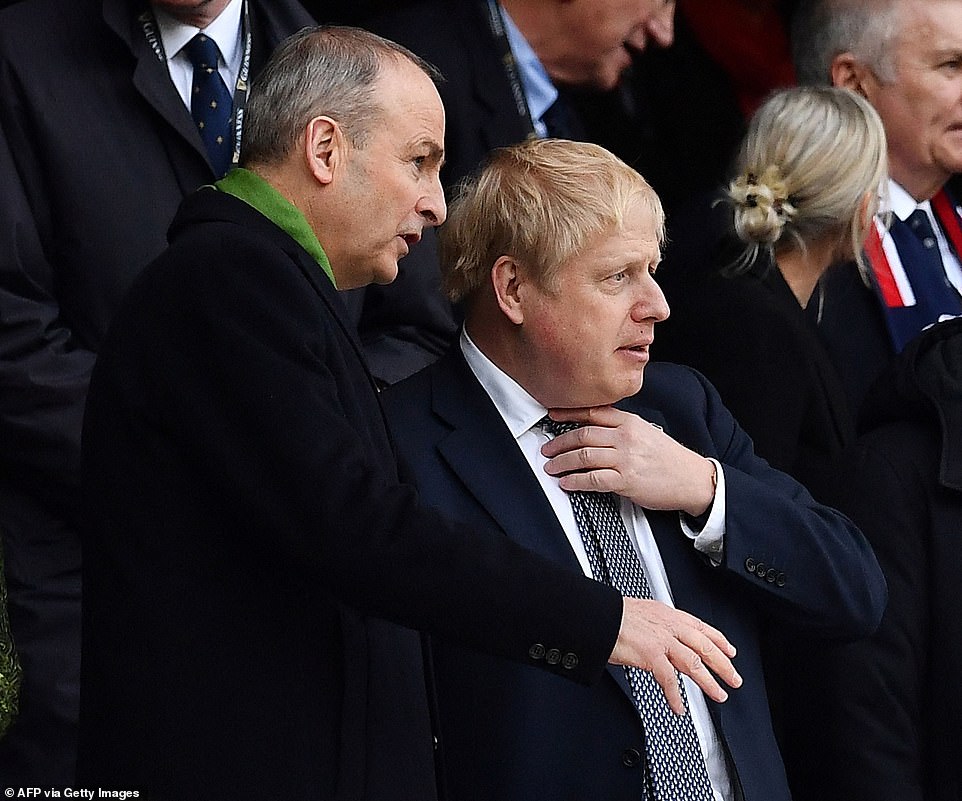 In a meeting with Taoiseach Michael Martin in London, the Prime Minister said ‘significant changes’ were still needed to the controversial Northern Ireland Protocol.

He said that while ‘greater ambition and flexibility’ were needed from the EU in the negotiations, it was his hope that ‘the same spirit of co-operation that had characterized the UK/EU relationship in respect of Ukraine could also be applied to resolving the issues with the protocol,” a Downing Street spokesperson said.

The spokesperson also said both leaders discussed their ‘deep concern around the intensification of hostilities near Kyiv’ and ‘condemned the attacks by Russian forces on civilians’.

‘The Prime Minister said this was a critical moment for Ukraine and for wider European and international security,’ the spokesperson added.

‘They agreed on the vital importance of continued unity in the face of Russian aggression, including through humanitarian relief, defensive military support to the Ukrainian government and further sanctions to target the Putin regime.’

Mr Martin told reporters on Friday: ‘The plight of Ukraine is upmost in our mind.

‘The relationship and the very constructive partnership between the United Kingdom, the European Union and the United States has been vital for standing up for democracy, freedom of speech and opinion – the very basic standards that we share. 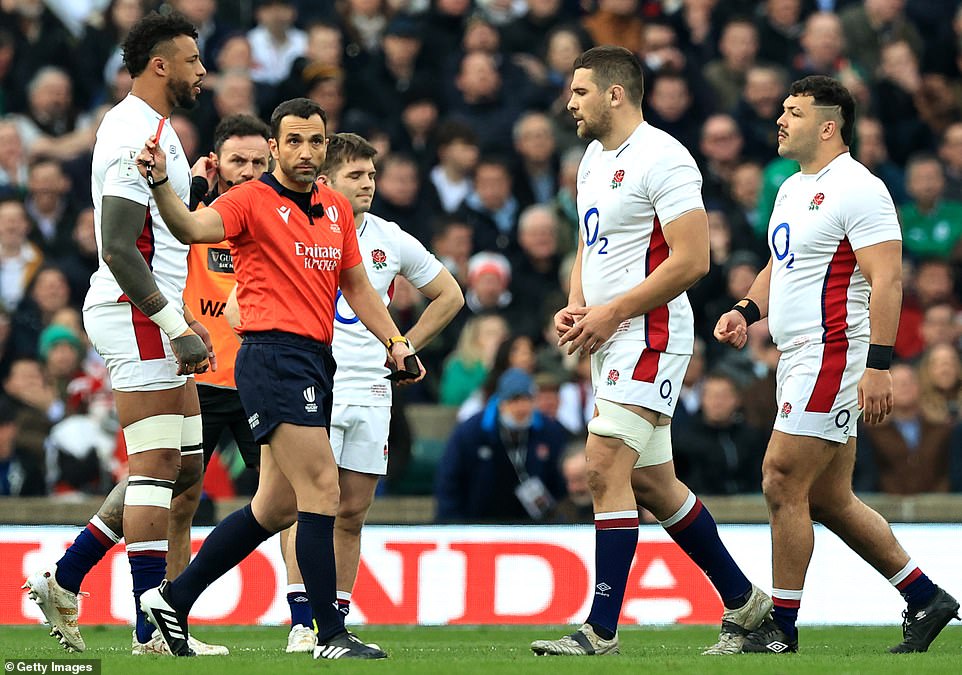 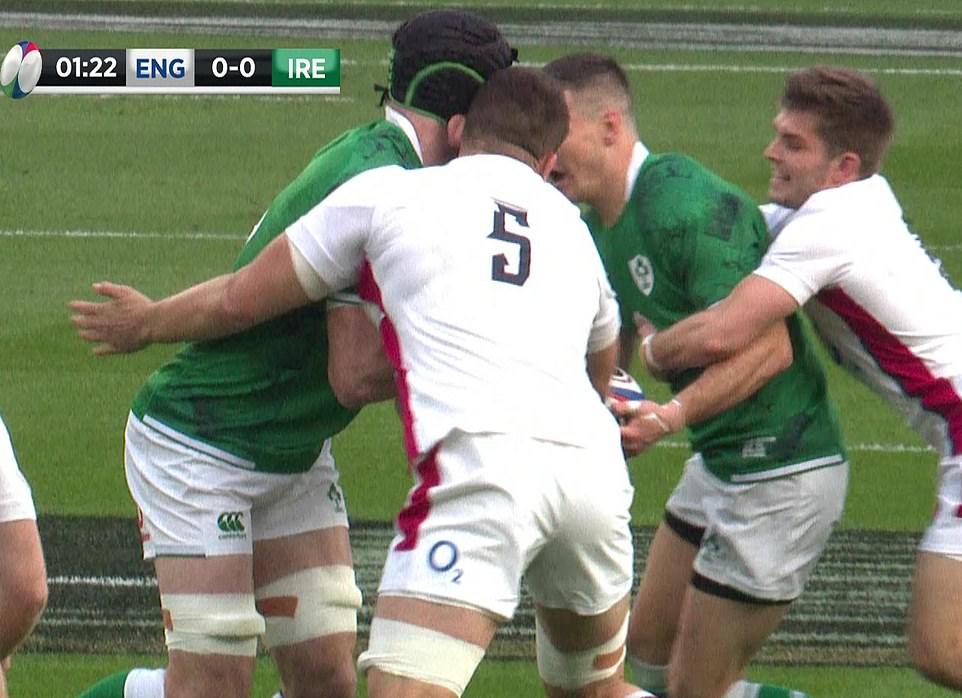 ‘I welcome what has been a very constructive engagement between the UK, the European Union and the United States.

‘I think the British Government deserves credit for its leadership role on this issue internationally and that’s been well reflected in the responses of eastern European countries.’

A spokesman for Mr Johnson said: ‘The Prime Minister has been speaking to many world leaders about the ongoing situation in Ukraine.’ 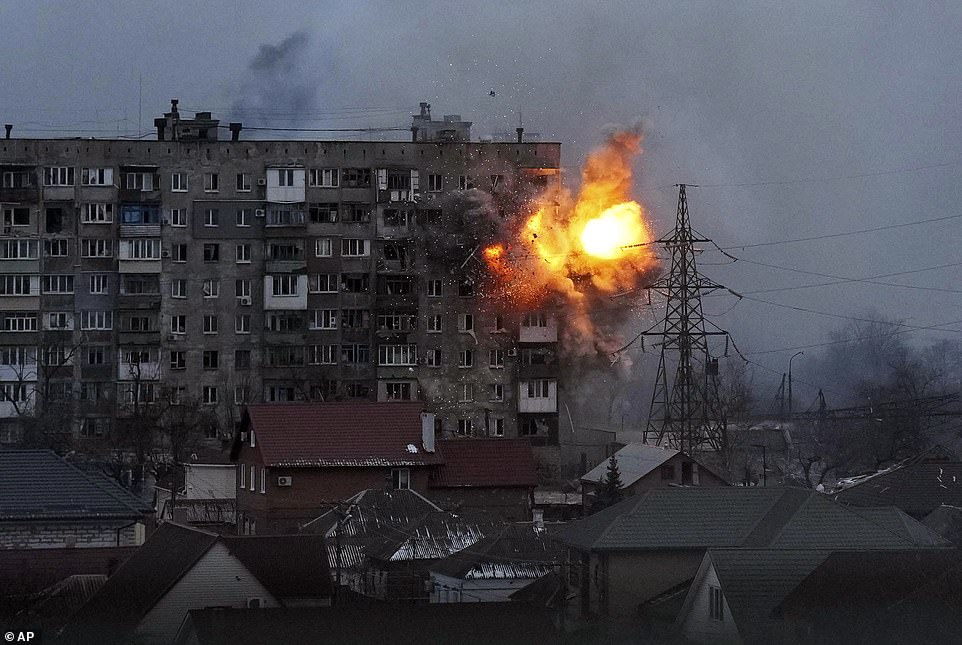 An explosion is seen in an apartment building after Russian’s army tank fires in Mariupol, Ukraine today 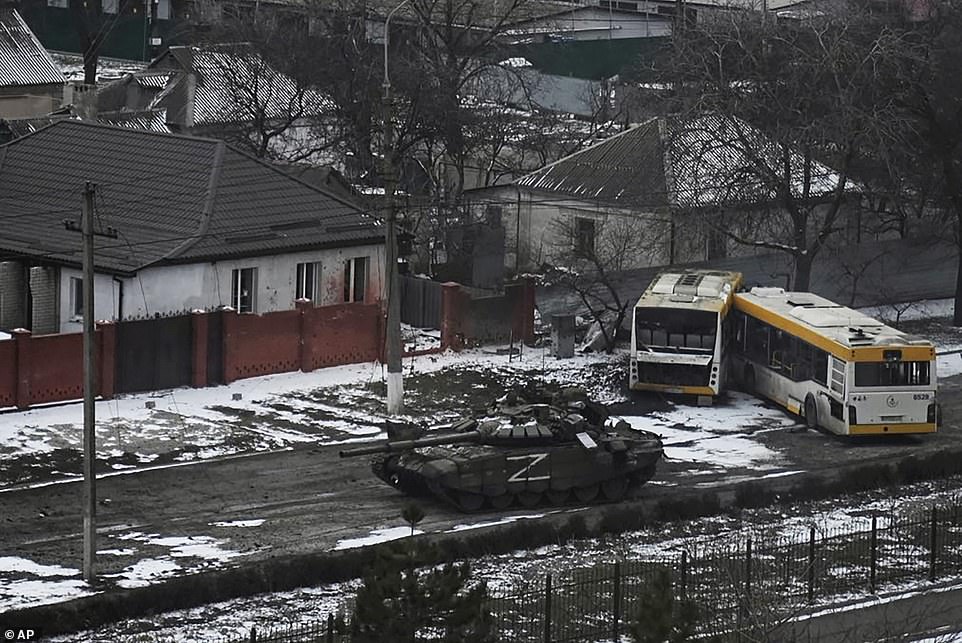 A Russian army tank moves on the outskirts of Mariupol, Ukraine today as the beseiged city is without water and electricity 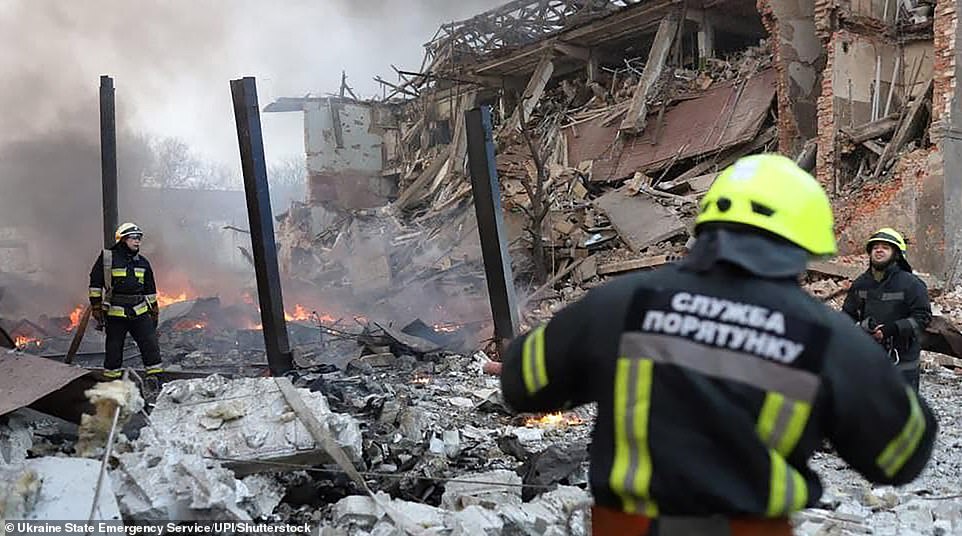 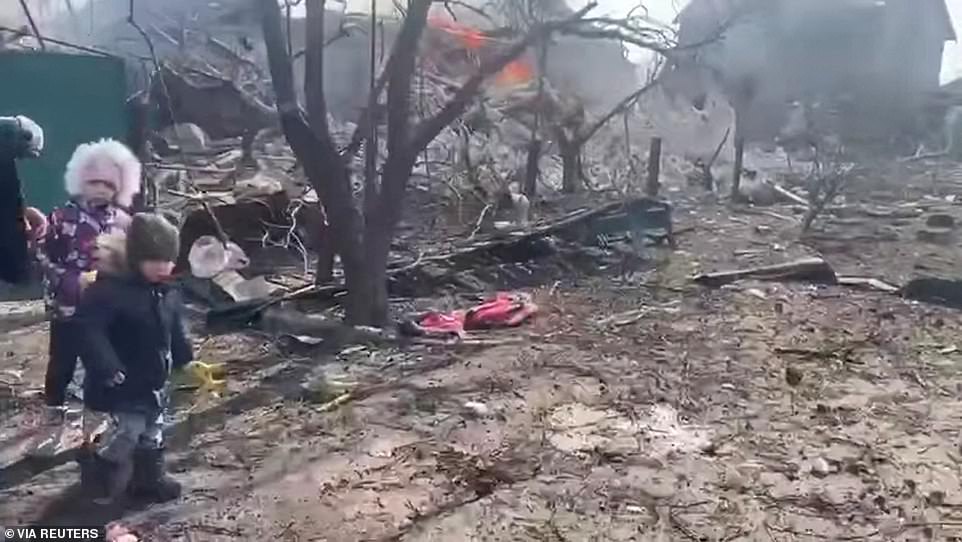 The crisis in Mariupol deepened yet further last night as the death toll passed 1,500 and the deputy mayor claimed his besieged city had been ‘totally destroyed’. Pictured: The aftermath of Russian artillery shelling on a residential area in Mariupol where a rocket hit a house 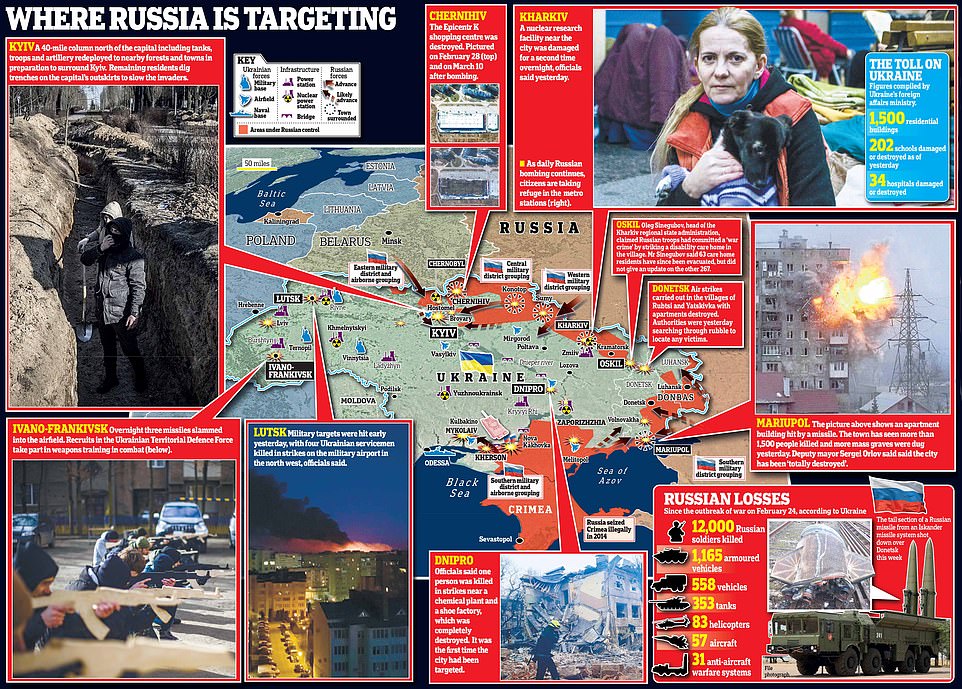 The Taoiseach will also attend an Enterprise Ireland business event and roundtable at the Embassy of Ireland and will finish the day as a guest of honor at a dinner at the St Patrick’s Day Ball Committee.

The Irish premier will attend London’s St Patrick’s Day festival and parade On Sunday, which this year will celebrate ‘community’ and key workers’ efforts during the pandemic.

Mr Martin will then travel to Washington DC for a series of engagements.