Despite being universally respected and widely admired for his bowling prowess and loveable larrikin attitude, Shane Warne was a pariah in cricket-mad Sri Lanka.

Sri Lankan fans and players alike didn’t care for Warne’s ‘take no prisoners’ style of playing cricket, and his pot shots at the country’s stars.

Then he enraged them when he said he ‘didn’t like’ the country’s captain, Arjuna Ranatunga, who had led them to victory in the 1996 World Cup.

An earthquake triggered the massive tsunami in the Indian Ocean on December 26, 2004, and hit Sri Lanka about two hours later.

Shane Warne talks to a group of fans at tsunami-hit Galle cricket stadium in southern Sri Lanka on February 9, 2005 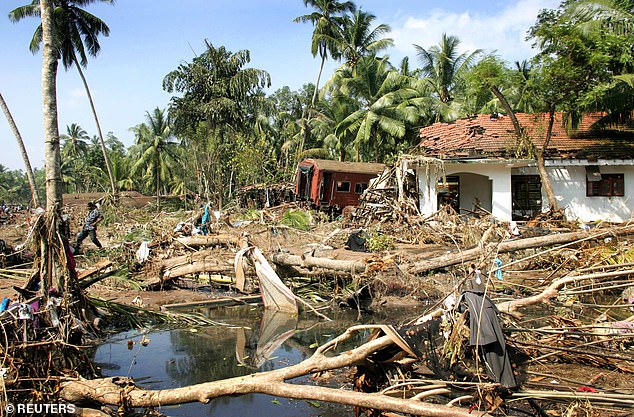 A wrecked carriage lies next to a destroyed home in Paraliya, Sri Lanka, after the whole train was destroyed by the Boxing Day Tsunami in 2004

Though Warne had a rivalry with Muttiah ‘Murali’ Muralitharan – the only bowler who beat Warne’s Test wicket record of 708 – he immediately called him after hearing about the devastation to his home country.

Murali got Warne to go to Sri Lanka him to help with the aid effort there.

‘I just wanted to help, I said to Murali, “what can I actually do?”‘ Warne told Channel Nine’s 60 Minutes at the time.

“He said, “you just being here will actually help”.’

Warne helped some of Sri Lanka’s most disadvantaged children, making people see him in a different, more compassionate light.

One of those he helped was Dilini Wasana, who was a little girl when the tsunami struck.

On December 26, 2004, an earthquake with an epicentre off the west coast of northern Sumatra, Indonesia struck.

It was an undersea megathrust earthquake that registered a magnitude of 9.1 to 9.3.

‘I was three or four when the tsunami hit,’ Ms Wasana told ABC.

‘We went to my uncle’s shop, and when the waves started, I ran with my aunt.

‘Somehow my dad found me two days after the tsunami… about three weeks later we came back to my village, we had nowhere to live and then I remember Shane Warne came here.’

Half a million people, including Ms Wasana’s family, lost their homes in the tsunami.

Warne walked around the disaster areas and was recognized by locals in some of the remotest parts of the cricket mad country.

When he arrived at the coastal village of Peraliya, he was applauded by children whom the disaster made homeless.

Warne gave them cricket balls and lollies and gave some bowling advice.

‘I remember he gave me a ball, he gave us something to eat and then he asked me for a kiss on the cheek,’ Ms Wasana said.

‘That humble man who spent time with us… he gave us something we could treasure when we had nothing.’

Warne’s reputation at home in Australia had taken a battering in recent years. He was banned for using a prohibited substance and his first Test back was not until March 8, 2004, in Galle, Sri Lanka.

And he was also charged with bringing cricket into disrepute for allegedly accepting money from bookmakers. 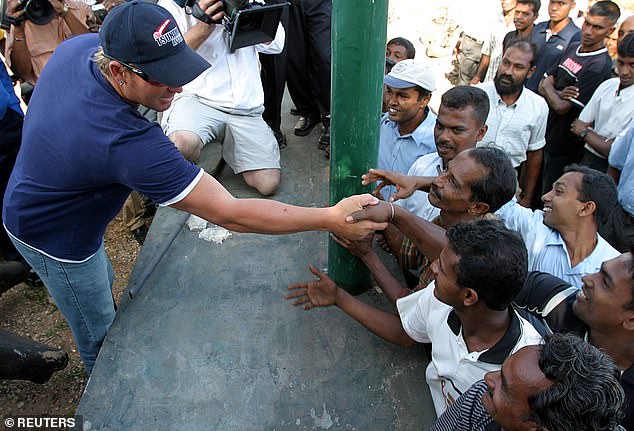 Shane Warne talks to a group of fans in tsunami hit southern Sri Lanka in February, 2005 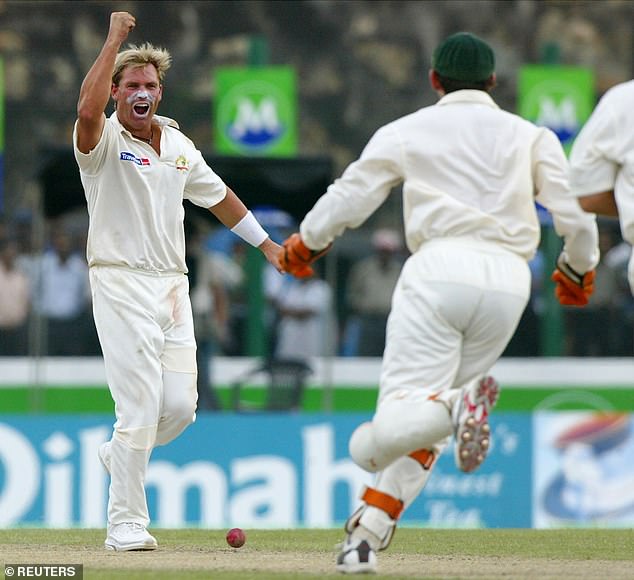 Shane Warne (pictured left) celebrates after taking the wicket of Sri Lanka’s Sanath Jayasuriya during the first day’s play in the first Test in Galle, Sri Lanka on March 8, 2004. Warne was playing in his first test after a one-year suspension for testing positive to a banned drug

This led to some questioning his motives – had he just gone to Sri Lanka to help improve his standing at home and abroad?

He replied: ‘I wanted to come here because I could help, if people read too much into it then they can, it’s no skin off my nose.’

Seventeen years after meeting him, Ms Wasana said: ‘It’s very sad that he died, but it is very special that he came and visited us.’ 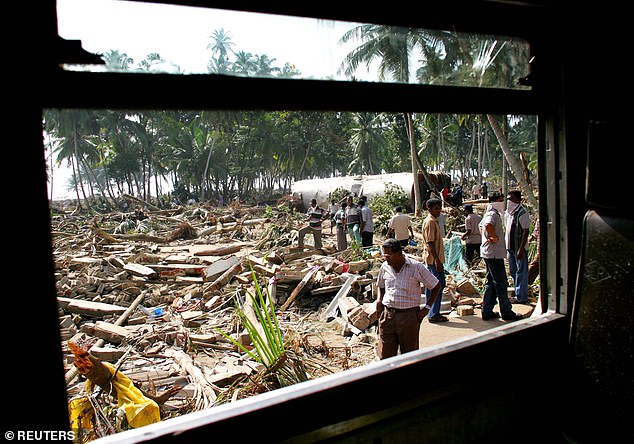 Workers sift through the wreckage of a passenger train in the town of Paraliya, 90 kilometers south of Colombo, after it was destroyed by the Boxing Day Tsunami in 2004 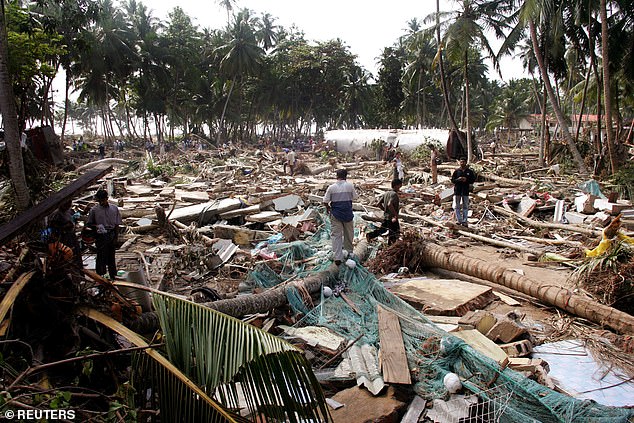 More than 1,200 bodies were recovered from the scene of a passenger train derailment in Sri Lanka as one of the most powerful earthquakes in history hit Asia on Boxing Day 2004, unleashing a series of tidal waves which devastated coastal areas of Sri Lanka, India, Indonesia and tourist isles in Thailand

Even Arjuna Ranatunga – who Warne had once said he ‘didn’t like’ – came to respect the Australian legend after his work following the tsunami.

Mr Ranatunga, who later became an MP and government minister, said Warne was a kind and generous person and that Sri Lankans got to know who the real man was.

He wasn’t the person competing in the middle. He had a lovely heart, a big heart for people here,” he said. 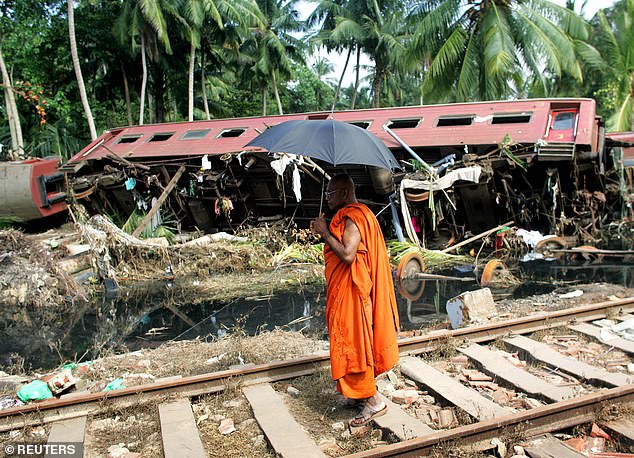 A Buddhist monk looks at a wrecked carriage after an entire train was destroyed by the 2004 Boxing Day Tsunami in the town of Paraliya, 90 km south of Colombo, Sri Lanka