It’s August 2008, the morning after Kenneth Egan won a silver medal in the light-heavyweight boxing final at the Beijing Olympics, becoming the third Irish fighter to take a medal at the Games.

Billy Rice gets a phone call from an old friend, Ollie Armstrong in Knockmore. Ollie has seen the wave of support for amateur boxing created by Ireland’s Olympic success and wants to know why there’s no boxing club in the Knockmore-Foxford area.

“I said: no money, no help, no premises,” Billy recalled. “Ollie said we could get money from someplace, we’ll get a bit of help from around, and we’ll go into the Resource Center and see if there’s a room upstairs.”

In that phone call were called the seeds of Knockmore-Foxford Boxing Club, which celebrated its 13th year in existence last year. In those 13 years, the club has lived something of a nomad lifestyle, moving from one base to another while providing the youngsters of Knockmore, Foxford and the surrounding areas with an outlet to learn and practice the sweet science, producing county, provincial and All Ireland champions along the way.

Billy Rice has been a central figure in the club’s story from the outset, coaching the boys and girls who come to KFBC looking for tutelage. It began with a room being sourced in the upstairs of the Knockmore Resource and a meeting called. Six people turned up.

“A couple of good lads,” said Billy. “Michael Langan, who’s still coaching, Brendan Walsh is still coaching. We said we’d give it a go. We had a training session and we got 44 kids the first night. We knew then we’d definitely go ahead with it.”

The challenge of creating a rural boxing club from scratch was no small thing. Billy and the committee initially decided that some inspiration was required so they invited Ray Moylette, then aged 18 and recently crowned as the World Youth Champion, to come along to a training session and speak to the young fighters.

From the outset, funding was a constant concern. The first notable bit of fundraising was a church gate collection in Knockmore, which raised the sum of €710. It wasn’t much but it was enough to rent some space and source some gloves. The new club was realistic in its plans.

The club spent five years in the Resource Center in Knockmore, before the receipt of some Sports Capital money allowed them to relocate to a bigger space in Foxford, above the old Hennigan’s pub. They were five years there too before the time came to move again, into the Leisure Center in Foxford, where the club is based today.

The Leisure Center has been good to them but it does come with its compromises.

“We can only have two nights a week there,” said Billy. “There’s bingo on a Friday night so we can’t train on Fridays. We have Mondays and Wednesdays, for two hours each.”

The club currently has over 60 members so condensing the training required into the time and space available is a constant challenge.

The logical next step is a big one: the development of a permanent home for KFBC, a purpose-built gym with space for the club and its boxers to grow and flourish. It secured a site from Mayo County Council just outside Foxford on the Swinford Road. An application for a Sports Capital grant to go towards the development yielded €50,000, but there are hopes that more funding can be secured in the coming months now that planning permission has been granted for the gym.

The new home, when it comes to fruition, will allow the club to continue on what has been a steep upward trajectory since its foundation 13 years ago.

“We’re happy with how things are going,” said Billy. “We have nine qualified coaches in the club and three more hopefully to come this year.”

Despite its relative youth, the club has already enjoyed some major success inside the squared circle. It has a string of Mayo and Connacht titles and five All-Ireland titles spread amongst four of its fighters. The talented Eric Nash was a double national champion and also represented Ireland at European level, while the most recent KFBC national champion was Kelsey Langan, who won the 39kg Girl 1 title at the National Stadium in May 2019. 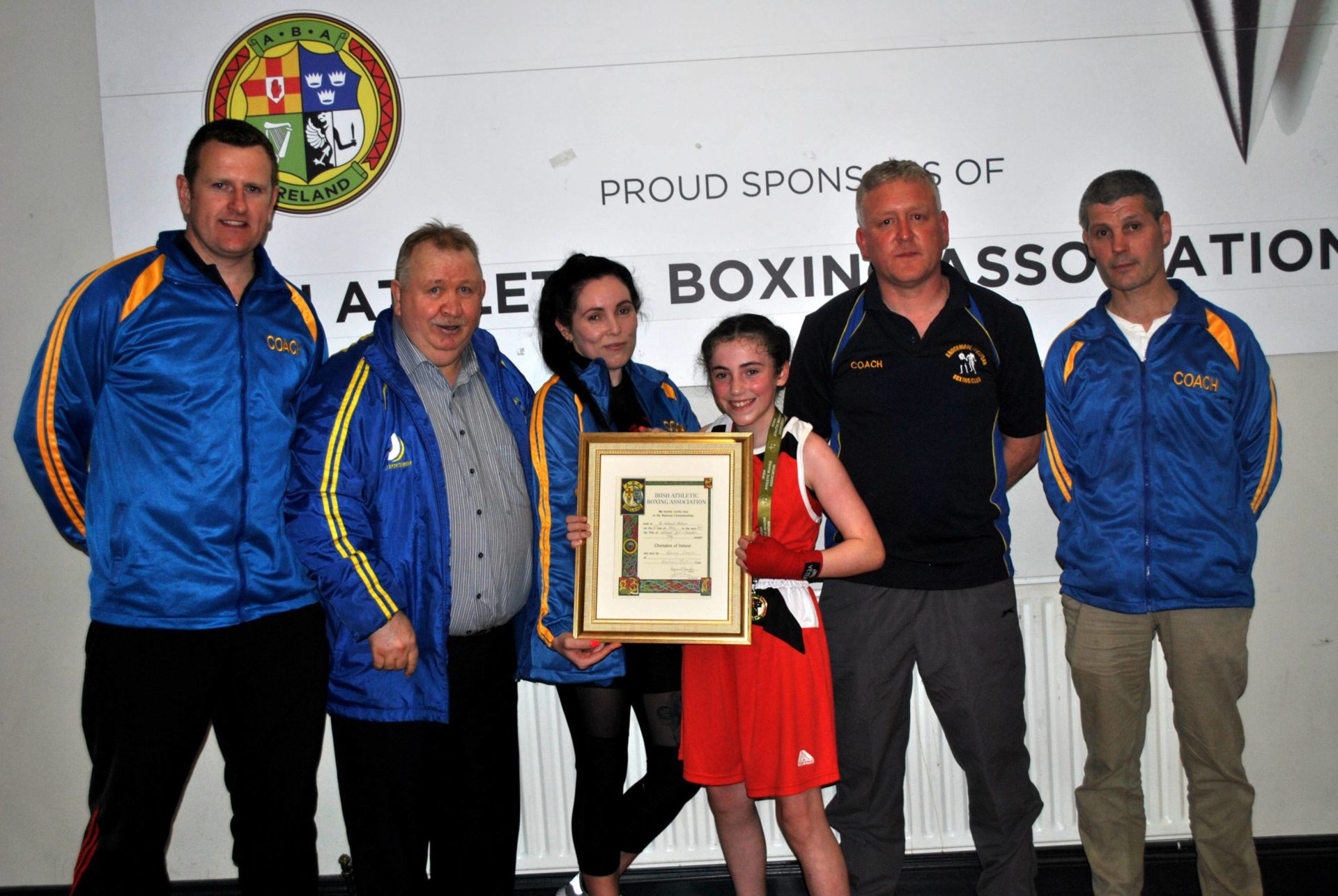 The last couple of years have been hugely difficult for boxing clubs around the country and Knockmore/Foxford has been no exception. Members just returned to training last October after more than 18 months out of action.

But the club used its lockdown time wisely, focusing on their planning application and fundraising efforts for the new gym. It was helped by local councilor Neil Cruise and also by local architect Kenny Casey.

Fundraising remains the biggest challenge. The club is still running its annual church gate collection, but even that was hit over the last couple of years with smaller numbers allowed to attend mass.

But the hope is that, with planning now secured, work can begin on the new gym in 2022, although that will depend on fundraising. In the meantime, the club will continue to work away.

It traditionally hosts two annual boxing tournaments and is planning to bring those back in the new year, namely the Kelly Cup in Knockmore and the Vincy James tournament in Foxford.

Billy himself remains an active coach in the club, as well as being a referee and judge on the local and national boxing scene. He was a talented underage boxer himself in his own time before becoming a coach with Ardnaree BC in his twenties. He gave it up for 20 years after getting married before falling back in love with boxing and coaching with the foundation of the club in 2008.

With the membership continuing to grow and the prospect of a new permanent home slowly but surely becoming a reality, the future looks bright for Knockmore/Foxford Boxing Club.