Liane Moriarty, the author of Apples Never Fall, says she was not as interested in tennis players who made it, as those who did not

Liane Moriarty, the author of Apples Never Fallsays she was not as interested in tennis players who made it, as those who did not

Nicole Kidman’s character Masha Dmitrichenko, in the mini-series Nine Perfect Strangers, started life as a small bald man called Gregory. Liane Moriarty (55), whose eponymous 2018 book, the lovely looking show created by David E Kelley is based on, says, “I had to use this name, Dmitrichenko, somewhere in the book. A woman pray for the rights to have her name used as a character in one of my books at a charity auction. So I remember thinking, I’ll get rid of Gregory, and have a Russian woman running the resort.”

Speaking about a call from Sydney, Moriarty says, it was almost like the name created the character. “She became a tall, striking, charismatic Russian woman. As soon as I had that character, I immediately saw Nicole, and had her in mind the whole time I was writing her.”

Two of Moriarty’s books have been adapted into prestige television with eye-watering production values ​​and an ensemble cast. Big Little Lies, based on her 2014 novel, also has Kelley as creator and writer and stars, apart from Kidman, Reese Witherspoon, Shailene Woodley, Alexander Skarsgård, Laura Dern and Meryl Streep.

Admitting to feeling lucky about the two adaptations, Moriarty says, “I was made to feel a part of the process, without actually having to do anything. It was a pleasure from start to finish. The adaptations bought me so many more readers who would otherwise never have discovered my books.”

Moriarty says adaptations need not be 100% faithful to the source material. “It is a different medium and there need to be changes to suit that medium. The best adaptations make the appropriate changes. Every single reader’s experience of reading a book is different, so an adaptation can’t ever completely replicate your individual experience. I might have answered this question differently if I ever got an adaptation that was not so wonderful.”

both Big Little Lies and Nine Perfect Strangers have been moved from their setting in Australia to the US. “Letting them be set in another country makes it easier for me to let go. Perhaps if they were set in Australia, I would be saying, everything should be like my book. I don’t feel that landscape is my strength. There are some books where the Australian landscape is such an important part that it cannot be set anywhere else.”

Her books, Moriarty says, could happen anywhere. The exception, she says, is her second novel, The Last Anniversary (2006). “It’s set on an island on the Hawkesbury River. That setting is important to me, and that adaptation must be set in Australia.”

Making a further distinction between her novels and their adaptations, Moriarty says, “When people say to me ‘I hope they don’t change your book’, I always say that nobody can ever change my book. I am in charge of those fictional worlds. In my book, the fundraiser in Big Little Lies happened with all those nuances. The fact that there is an adaptation where beautiful people live in amazing homes does not bother me.”

And now her latest novel, her ninth, Apples Never Fall (Penguin Random House) has been optioned by David Heyman, the producer of the Harry Potter films and Once Upon a Time in Hollywood† The novel tells of a couple, Joy and Stan Delaney, who seem to have everything going for them — a successful business and four grown-up children. However, like in all Moriarty novels, seemingly perfect is not perfect. A strange young woman enters their lives and when Joy suddenly goes missing, it is time for the Delaney children to look at their parents with new, adult eyes. 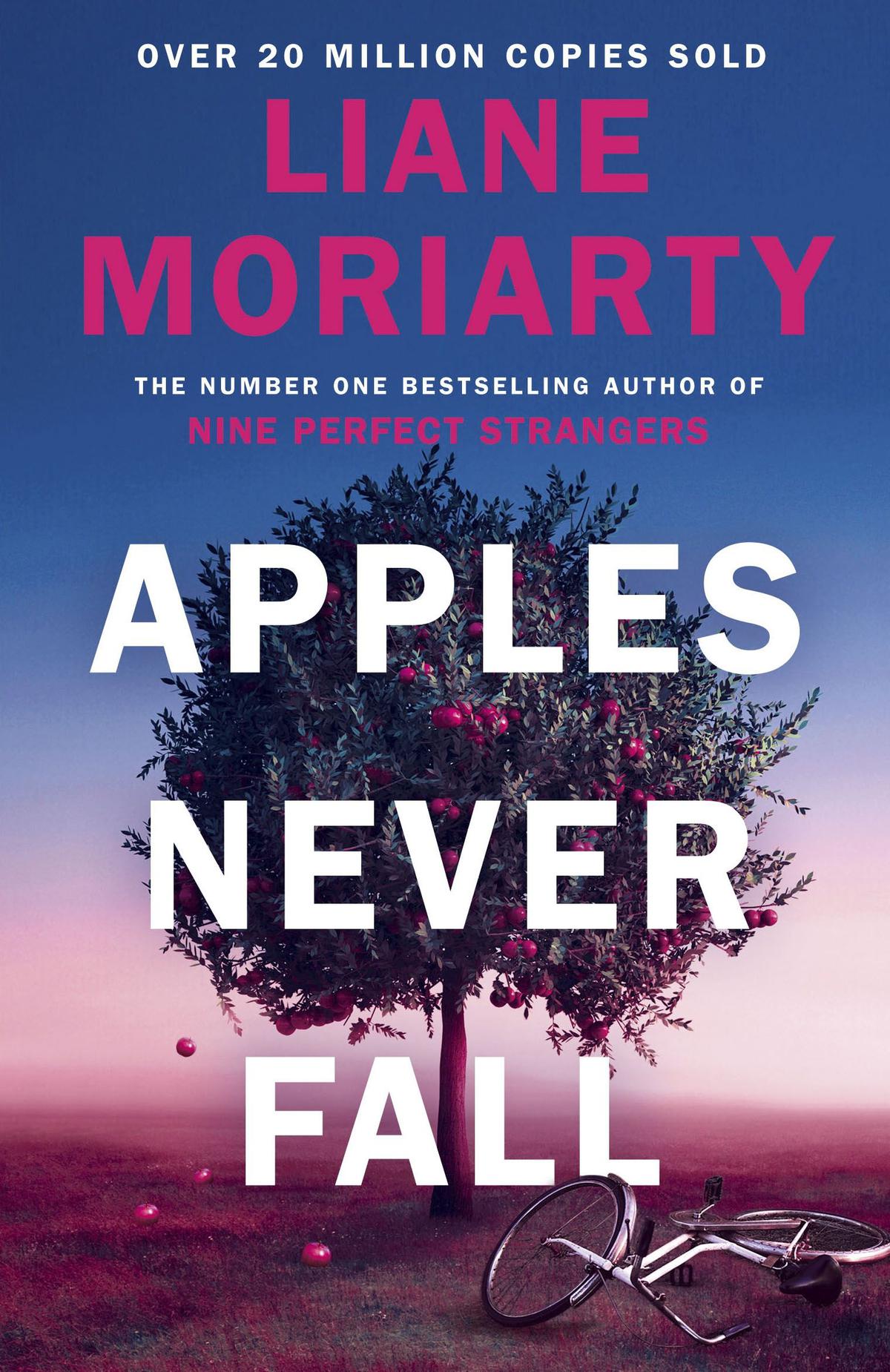 Just like Joy in the novel, Moriarty got fancy wireless headphones, which got her into true crime podcasts. “Sadly there are multiple cases where a woman goes missing, and the main person of interest is the husband. Invariably, he would be described as a loving father. When I heard about those cases, I thought about the children.”

Moriarty wondered how those children would feel as adults. “How would they then look back on their own childhood and consider their parents’ marriage? You can look at it through a child’s eyes and as an adult, you can look at it with completely fresh eyes.”

There is a return to sibling rivalry in Apples Never Fall after Moriarty’s first novel, Three Wishes (2004), which was about three sisters. “I’m the eldest of six children and have four younger sisters. It is an area I have some expertise in ( laughs† I enjoyed the idea of ​​having the family, forming two factions with one that thinks it is possible that the father is responsible and the other that would say there is absolutely no way. I also enjoy working with the humour, fun and drama of sibling rivalry.”

Tennis became the centerpiece of the novel almost accidentally, according to Moriarty. “I didn’t set out to write a book about tennis. My premise was a woman who goes missing and her husband being the main person of interest.”

Moriarty wanted a family business for the sake of convenience to keep all the characters in one place. “I was having a tennis lesson one day because I was trying to keep up with that 13-year-old who just fixed my computer.” (A reference to the beginning of the call when there was a sound issue which was fixed by Moriarty’s son George, though Moriarty laughingly said her husband, Adam, tried to take credit.)

“While I was having the lesson I thought to myself, I’ll make this family business a tennis school. I still wasn’t thinking of tennis being a big part of the novel, but then I thought, if they run a tennis school, then they are clearly into tennis. I started talking to former coaches and professional players. I was struck by the level of sacrifice that goes into a tennis career. It got me thinking about what happens if you make those sacrifices, you have the talent, but you still do not make it to the very top.”

Research, Moriarty said, involved reading autobiographies of tennis players. “To be honest, I wasn’t so interested in the players who made it, as much as the players who didn’t.”

Writing about tennis, Moriarty said was interesting because tennis is about the desire to win and what happens when one loses is fascinating. “I made Joy and Stan doubles players and their relationship on the court could become a metaphor for their relationship. I wanted sibling rivalry to be an important part of the book so by making these four characters athletes I could lean into their competitiveness with each other.”

The book opens with four apples lying on the grass alongside a discarded bicycle. “Originally I was using lots of different titles to do with tennis, but I kept returning to the apples and apples started to become a theme. I thought of the phrase, apples never fall far from the tree which obviously worked well with the theme of family and what you pass on to your children and what you do not.”

Apples Never Fall could be a thriller, a drama and a social satire. “I probably would like a little bit of each of those three descriptions, (laughs) but if I had to choose one, I would prefer drama with a little bit of a thriller in the background. Though my books are often described as thrillers, I think they are not quite thrilling enough. Traditional thriller readers would get impatient with me thinking there is no need to go off on some tangent about a characters’ childhood.”

It would be easier, Moriarty feels if her books fitted into a genre. “I prefer the reviews which say genre-defying, rather than ones that say she can’t decide which genre (laughs). I just write a story. I don’t sit down to write a story in a particular genre. It’s up to other people to say what it is or isn’t.”