Revered worldwide as the father of modern-day surfing, Duke Kahanamoku introduced Australia and New Zealand to the Hawaiian style of surfing. During a 1915 swimming exhibition tour, Duke captivated spectators with a demonstration of surfing on Freshwater Beach, Australia. Waterman depicts the jaw-dropping tandem surfing ride with Isabel Letham, a young woman who would go on to become an accomplished surfer.

As a dark-skinned Pacific Islander, Kahanamoku broke racial barriers with athletic accomplishments before Joe Louis, Jesse Owens and Jackie Robinson – yet relatively few people outside of Hawaii know his story and impact.

watch American Masters: Aquarius – Duke: Ambassador of Aloha Tuesday, May 10 at 9pm on WITF TV, or stream it on-demand starting May 11 through June 12 through the PBS Video app and at video.witf.org.

Narrated by Jason Momoa (Aquaman, Game of Thrones, Dune), this new documentary reveals Kahanamoku’s influence on the global popularity of surfing, his life-saving achievements ad the obstacles he overcame within and outside of the world of sports. 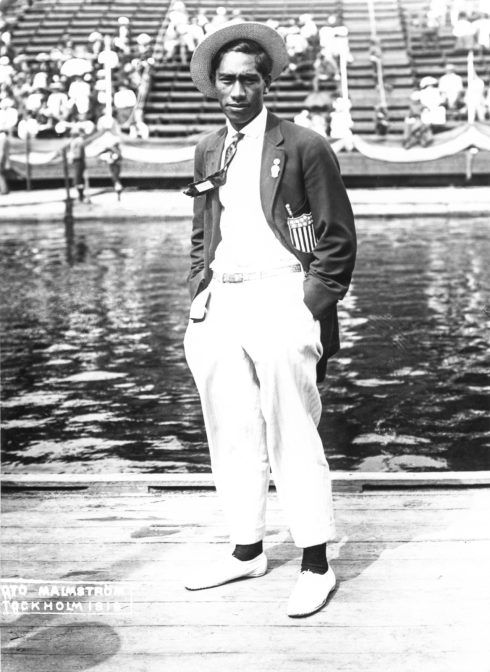 The documentary shows Kahanamoku’s rise to fame and how he became the face of Hawaii as it evolved from an isolated island kingdom to a multi-ethnic American paradise.

After his performance in the 1924 Olympics, Kahanamoku dabbled in Hollywood and started to appear in movies by 1925. Unlike other Olympic champions who went on to star in blockbusters, Kahanamoku’s dream of playing Tarzan never materialized. Instead, that role went to his friend and Olympic rival, Johnny Weissmuller.

Though he represented Pacific Islanders in minor Hollywood roles, Kahanamoku became known as the “Ambassador of Aloha” and played a vital role in supporting Hawaii’s new and flourishing tourist industry.

Because of Kahanamoku’s influence and celebrity, surfing had spread throughout America and the globe by the time Hawaii joined the US as its 5th state. Through his popular surfing exhibitions, he brought the sport to both US coasts, and to Freshwater Beach near Sydney, Australia. He also famously used his surfboard to save eight people from a shipwreck near Newport Beach, CA, which was heavily documented in news media.

watch American Masters: Aquarius – Duke: Ambassador of Aloha May 10 at 9pm on WITF TV, or stream it on-demand through the PBS Video app or online starting May 11 through June 12.

This program is part of WITF TVs Asian American and Pacific Islander Heritage Month programming. This month’s AAPI programming is supported by Penn State Health and The Foundation for Enhancing Communities†