The first day of the Superbet Rapid & Blitz Poland, the second event of the 2022 Grand Chess Tour, was dominated by a vintage performance from GM Vishwanathan Anand, who leads the fray with a perfect score. With each win being worth two points—and one point awarded for a draw—Anand jumped to a two-point lead after three games.

GMs Levon Aronian, Fabiano Caruana, and Jan-Krzysztof Duda all worked their way into equal second, all three suffering hiccups along the way. The chasing pack, comprised of GMs Wesley So, Anton Korobov, and Richard Rapport, all trail by a further point.

GMs Radoslaw Wojtaszek, Kirill Shevchenko, and David Gavrilescu round out the field but were unable to make their mark on the first day despite playing creatively.

The first round began with a number of alluring matchups and none more so than the clash between chess titans Aronian and Caruana. The Armenian powerhouse opened with the trusty Bishop’s Opening, a variation in the Berlin that avoids one of Caruana’s pet opening, the Petroff Defense.

Caruana was out of his comfort zone as early as move 16, where he felt it necessary to gambit his passed e-pawn in order to liberate his bishop in the face of a looming kingside pawn storm. Aronian dealt with the dubious play soundly and took control, claiming a nice win in the opening round.

Two-time World Rapid Chess Champion Anand, who has constantly rebutted rumors of retirement from professional chess in the past years, showed that he is still more than capable of dueling with the world’s best. The affectionately-known “Tiger of Madras” toppled the Polish number-two player Wojtaszek in a 36-move ambush where he pounced after a single gaffe from his opponent.

The game was quite unique and the anarchic opening quickly became the subject of memes across social media.

The sole player to win with the black pieces was Rapport, who also employed the French Defense and quickly seized the initiative after Shevchenko’s knight sacrifice (which engines supported) went awry. A single draw completed an otherwise decisive round where So was unable to crack an unwavering Korobov.

The players are not the only famous personalities present in Warsaw, with VIPs and dignitaries making appearances at the opening ceremony. Former World Champion Garry Kasparov made the ceremonious first move of the event and conducted a simultaneous exhibition before the tournament began.

Round two saw a continuation of the combative chess seen earlier with three wins and two draws, only Anand managing to rise to a 2/2 score.

The Indian legend, who won the first-ever World Rapid Chess Championship title 19 years ago, kept the momentum rolling and cleaned up So with the black pieces in just 30 moves. A barnstorming assault on So’s queenside-castled king proved too much for the American GM and with five minutes left on the clock to Anand’s ten, and So resigned.

The Game of the Day, annotated by GM Dejan Bojkov, will be added shortly.

Korobov showed how dangerous he can be in the quicker time controls in the second round, demonstrating exemplary technique to simplify and convert a rook ending against Gavrilescu.

The Ukrainian GM is a serious contender in this event if he can return to the form that saw him take down GM Magnus Carlsen in 23 moves in the 2016 World Rapid Championship, a result that likely cost Carlsen the title.

The game between Caruana and Duda looked to be heading towards a draw before a major miscalculation from the Polish hopeful allowed Caruana to capitalize. Duda had no choice but to try and bluff his way through the position, but Caruana was not fooled by the speed of his opponent’s moves. The pair’s important face-off this year will come next month when they clash at the 2022 FIDE Candidates Tournament.

Who will win and become the World Chess Championship Challenger?

Rapport and Aronian kept with the theme of opposite-sided castling, both players kindling the flame for a double-edged middlegame. The energy in the position dissipated, though, and after several missed chances and exchanges, the players were left with a dead-drawn ending. Both were pleased to move to 1.5/2.

The longest game of the day was a 118-move grinder between Wojtaszek and Shevchenko where the latter was forced to defend with a lone rook against a rook and knight for 75 moves! After playing out the textbook draw, the players were rewarded with CAPS scores averaging a whopping 98.85, a herculean feat after so many moves.

Anand was simply outstanding in today’s games, surging to a third straight win in the third round, this time leaving Korobov in his wake. Amazingly, Anand took less than 100 moves to dispatch all three of his world-class opponents today, and the 28 move win against his Ukrainian opponent was his most commanding.

Clearly agitated by his previous loss, So scored the most convincing win in the third round after an early gaffe by Shevchenko. The players diverted from theory on move ten and, after an exhausting game in round two, Shevchenko gave an edge to So with 11.Bd3 on the very next turn. The position suddenly suited the American superstar’s aggressive style and So was able to quickly take over the center and never looked back.

The battle between Duda and Rapport promised to be a messy affair, with both players historically relishing in a tactical slugfest, and the King’s Indian Defense felt like the perfect platform for the players to show off their styles.

At one point the position appeared to be locking up until Rapport made the decision to pry open the kingside. Rapport was unfortunately not rewarded for his ambition and Duda was able to punish the Hungarian trickster for overpressing. In the end, he managed to trap the queen, which had strayed too far into White’s territory.

Gavrilescu seemed to be finding his feet after a tough start, building a strong position in the Nyezhmetdinov-Rossolimo Attack against none other than Caruana. Time pressure was his downfall though and, facing an eight-minute deficit on the clock, the Romanian champion became too reactionary, losing his initiative and, eventually, the game.

Aronian endeavored to replicate Caruana’s time squeeze but Wojtaszek proved too experienced to overplay his hand. The two traded off pieces until a lone bishop signaled the conclusion of the day’s play.

The first three rounds have set the stage for an exciting event full of swashbuckling play and clear winning intent from all of the players. Anand’s results so far are a stark reminder of three things—that form is temporary, class is permanent, and above all, age is just a number. 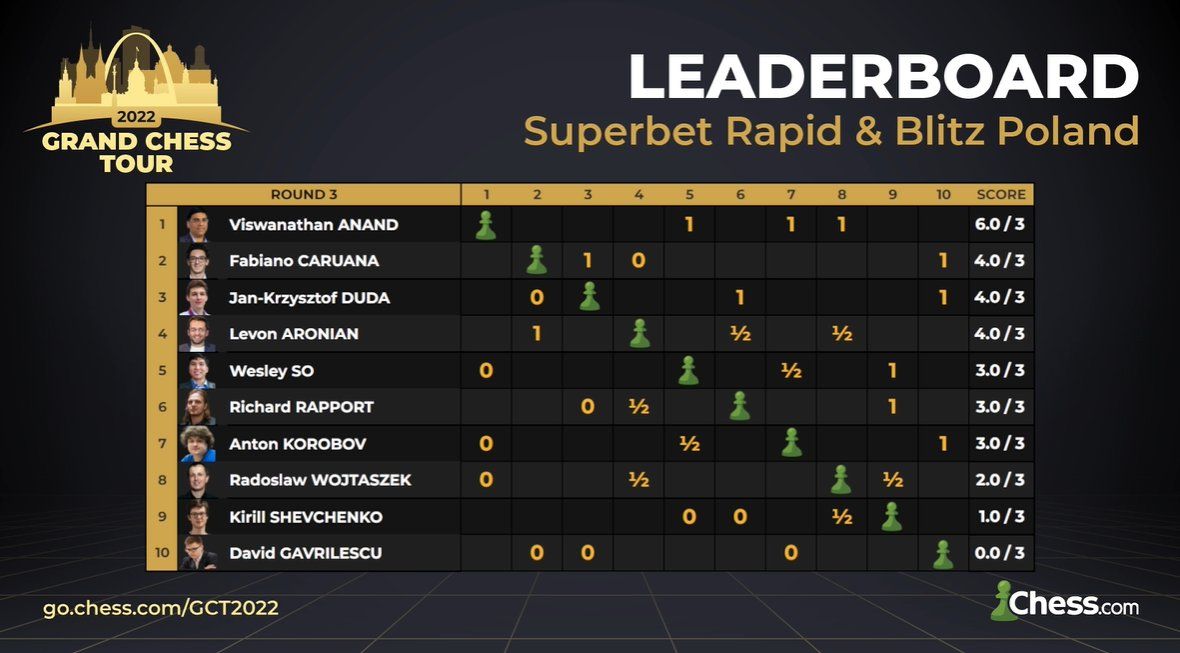