The new 2023 M4 CSL is said to be the closest a production BMW has been to its competition-spec sibling. That’s a bold claim, and one which instantly sets this car aside from the vast majority of special editions whose unique features are often limited to fancy trimmings and an off-menu color code.

To earn that “Competition, Sport, Lightweight” mantle, the engineers at BMW M GmbH have taken a chain saw to some elements and a scalpel to others. Noticeable changes include the lack of rear seats and turning out the roof, hood, and trunk lid in carbon fiber.

Less sexy examples of extreme weight saving include shaving 8 lbs (3.6 kg) from areas such as the kidney grilles, rear lights, floor mats, and automatic climate control. In total, 240 lbs (109 kg) have been ditched over the standard car — roughly the same as what was achieved with the 2003 E46 M3 CSL.

Output has been bumped by a healthy 40 hp (41 PS / 30 kW) over the M4 Competition, bringing the total to 543 hp (550 PS / 411 kW) from the inline-six twin-turbocharged engine. Unsurprisingly, power is channeled through the rear wheels — no space for a heavy all-wheel-drive system here. Unfortunately for purists, there’s no manual option. You make do with the M-specific version of their eight-speed auto.

However, the result is the fastest series-production BMW to ever go around the Nürburgring’s Nordschleife circuit, setting a time of 7:20.2, with a curb weight of 3,640 lbs (1,651 kg), and a power to weight ratio of 6.7 lbs/ hp. 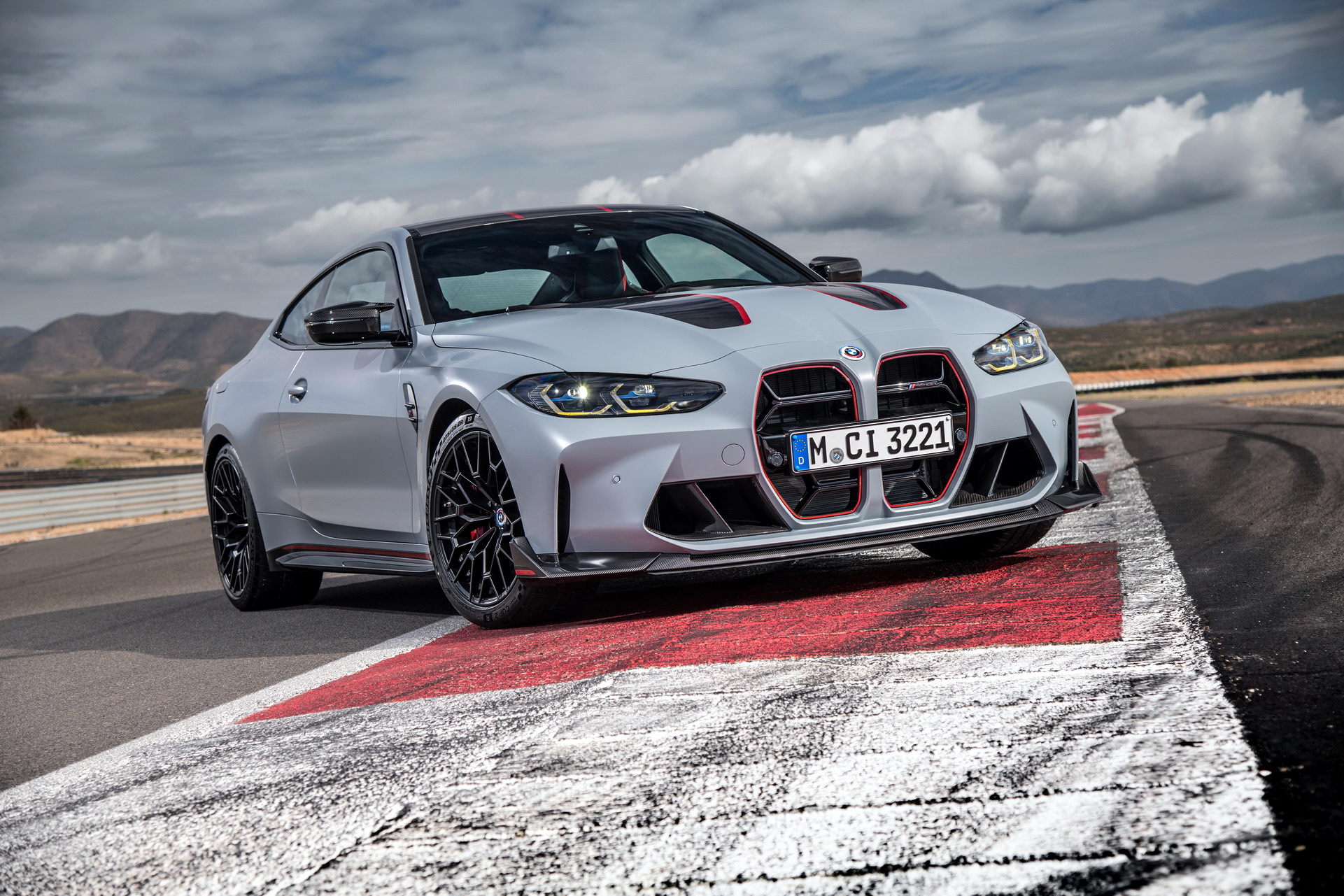 While M badges may seem to be ten a penny, the CSL moniker is traditionally more hallowed. Yes, CS aka Club Sport models abound, but that added L is significantly harder to warrant. In fact, those three letters have only appeared on two cars previously: the E9 3.0 CSL “Batmobile” and the E46 M3 CSL.

Shedding weight has always been a core philosophy for any CSL. In addition to getting rid of the rear seats, the front chairs have been replaced with M Carbon full buckets. That’s a saving of 53 lbs (24 kg). Carbon-ceramic brakes, forged wheels, and lighter springs and struts chop off another 46 lbs (21 kg). Parring back on sound insulation and swapping what is there for an “ultra-lightweight” solution saves 33 lbs (15 kg).

If you’re not impressed by this point, then the 9 lbs (4 kg) saved by switching to a titanium exhaust won’t do it. However, we foresee the more braggadocious of owners already highlighting the extensive use of carbon fiber. Indeed, while carbon fiber roofs have been more common since the M3 CSL introduced it (now optional on the 2022 M3 and M4), the M4 CSL extends the material’s application to the hood and trunk lid.

While BMW has avoided going full “Fast & Furious,” by leaving the entire hood exposed, they leave two channels bare, highlighted by red accents, to tell the world of the CSL’s lightweight credentials. Those red lines extend to the roof, emphasizing the double bubble. 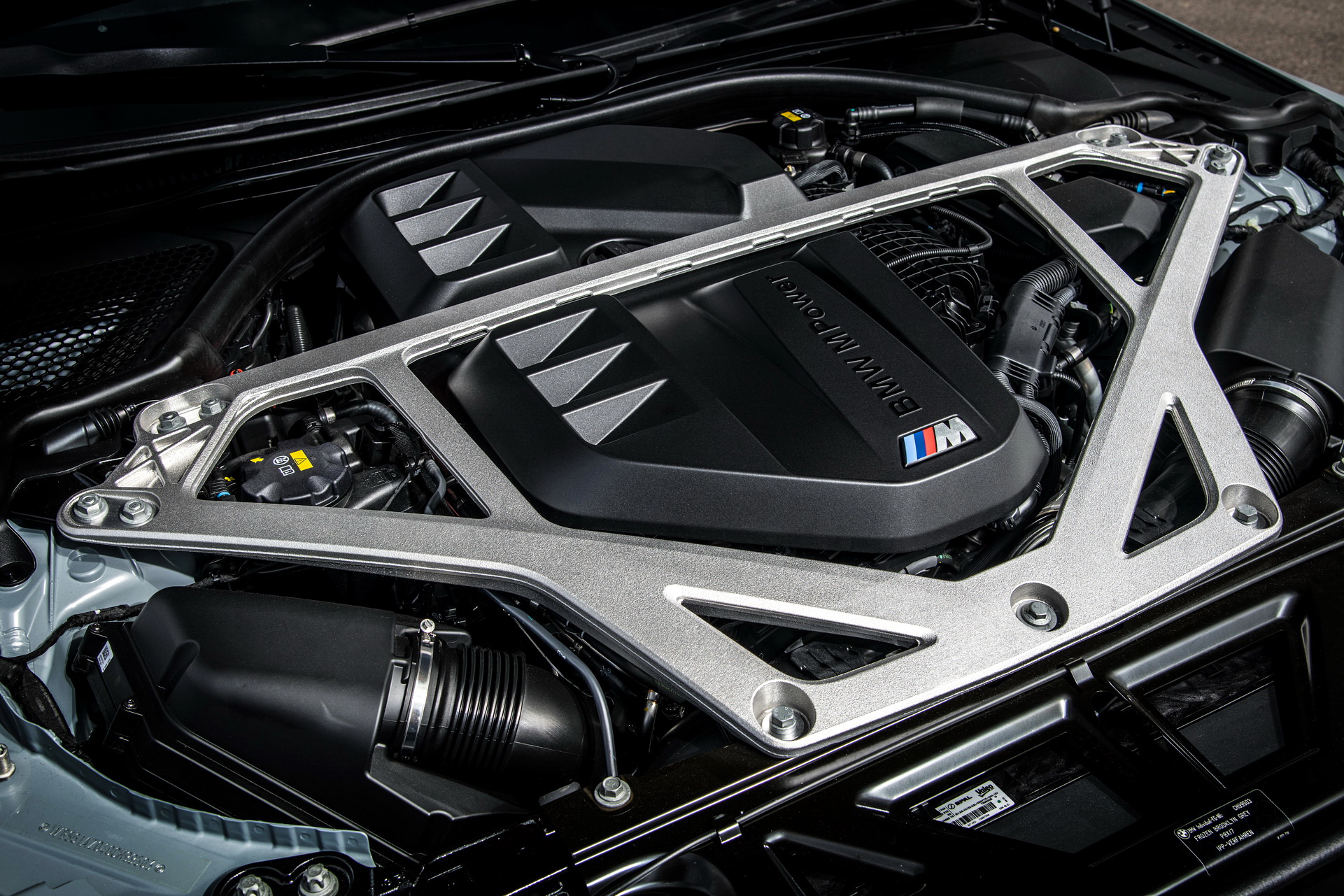 The increase in output from the 3.0-liter twin-turbo straight-six is ​​in part down to alterations to the boost system. In addition to further weight-saving advances within the engine, boost pressure has been increased, from 24.7 psi in the M4 Competition to 30.5 psi in the CSL.

BMW highlights the rev-happy nature of the engine and says that elements such as uniquely designed engine and transmission mounts improve the transmission of power to the road and enhance driver connection.

Although the lack of a third pedal will irritate those looking for the purest of pure driving experiences (and that driver engagement BMW talked about earlier), the eight-speed transmission is said to have been tuned to be as communicative with the driver as possible and includes a track-optimized setting. 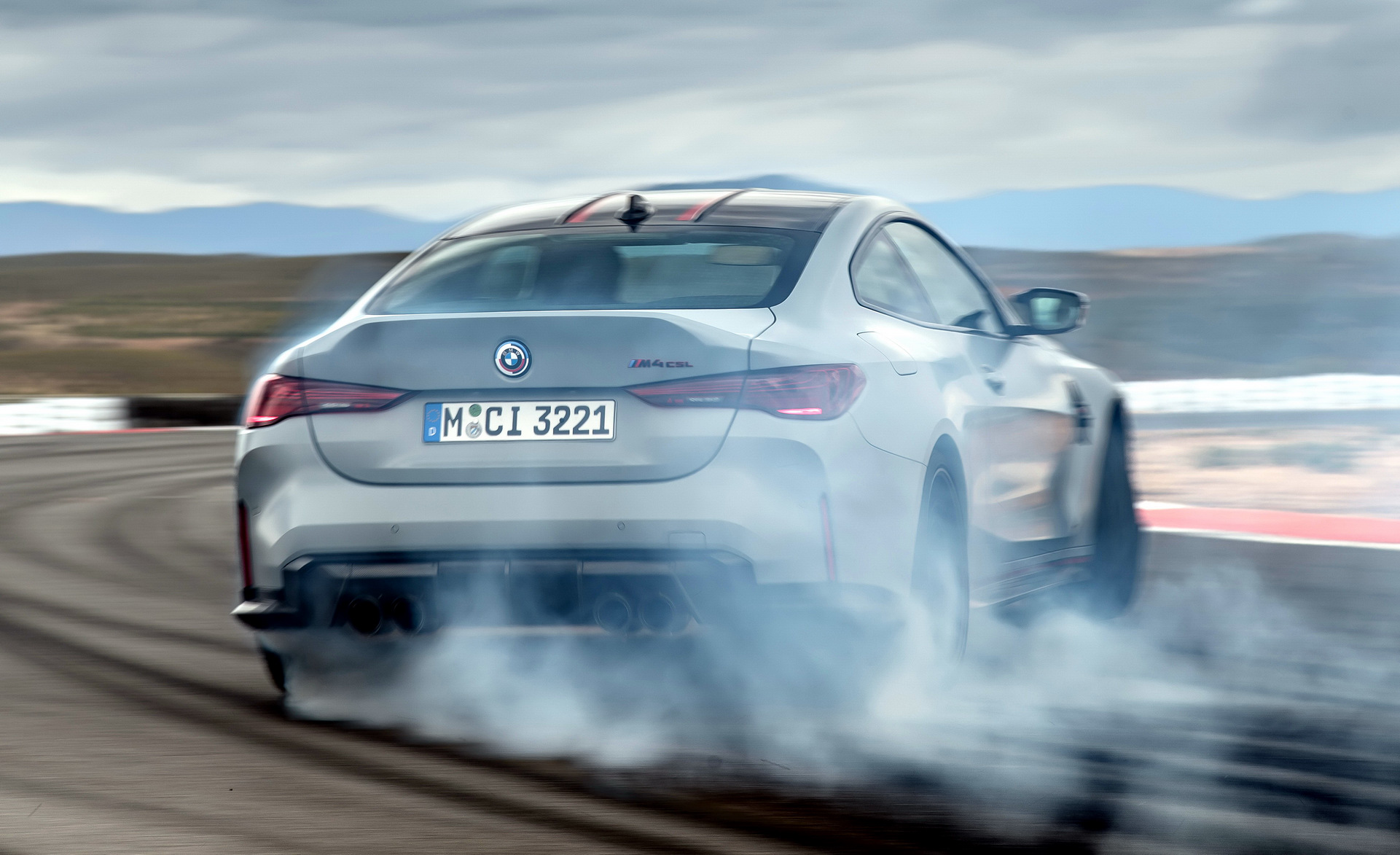 The M4 CSL features unique dampers and chassis tuning, with its ride height 0.3-inches lower than the M4 Competition. The suspension has been beefed up, with zero-play ball joints in the control arms, a rigid connection between the body and the rear subframe, and special-engineered anti-roll bars.

The traction control program has been tweaked for the CSL too, with one set of options designed to allow for controlled drifts, and another set based on touring car applications. The latter modes allow for the fastest track times, with settings that are geared for specific scenarios — for instance, there’s a TC setting for dry weather running with perfect tire temps. This has the lowest level of intervention. On the other hand there are settings for wet weather running, which will have the computer progressively more eager to intervene.

Keeping the power in check is a set of six-piston, fixed-caliper brakes at the front and single-piston, floating-caliper at the rear. Pedal feel can be adjusted via the M setup menu, adjusting the required brake pressure.

Connecting the M4 CSL to terra firma are specially designed Michelin Pilot Sport
Cup 2 R tires measuring 275/35 ZR19 at the front and 285/30 ZR20 at the rear. If these are two extreme (read, if you want something better suited for everyday driving) then the CSL can be ordered with the traditional high-performance tires from the M4 Competition, at no cost.

No Curved Screen Inside 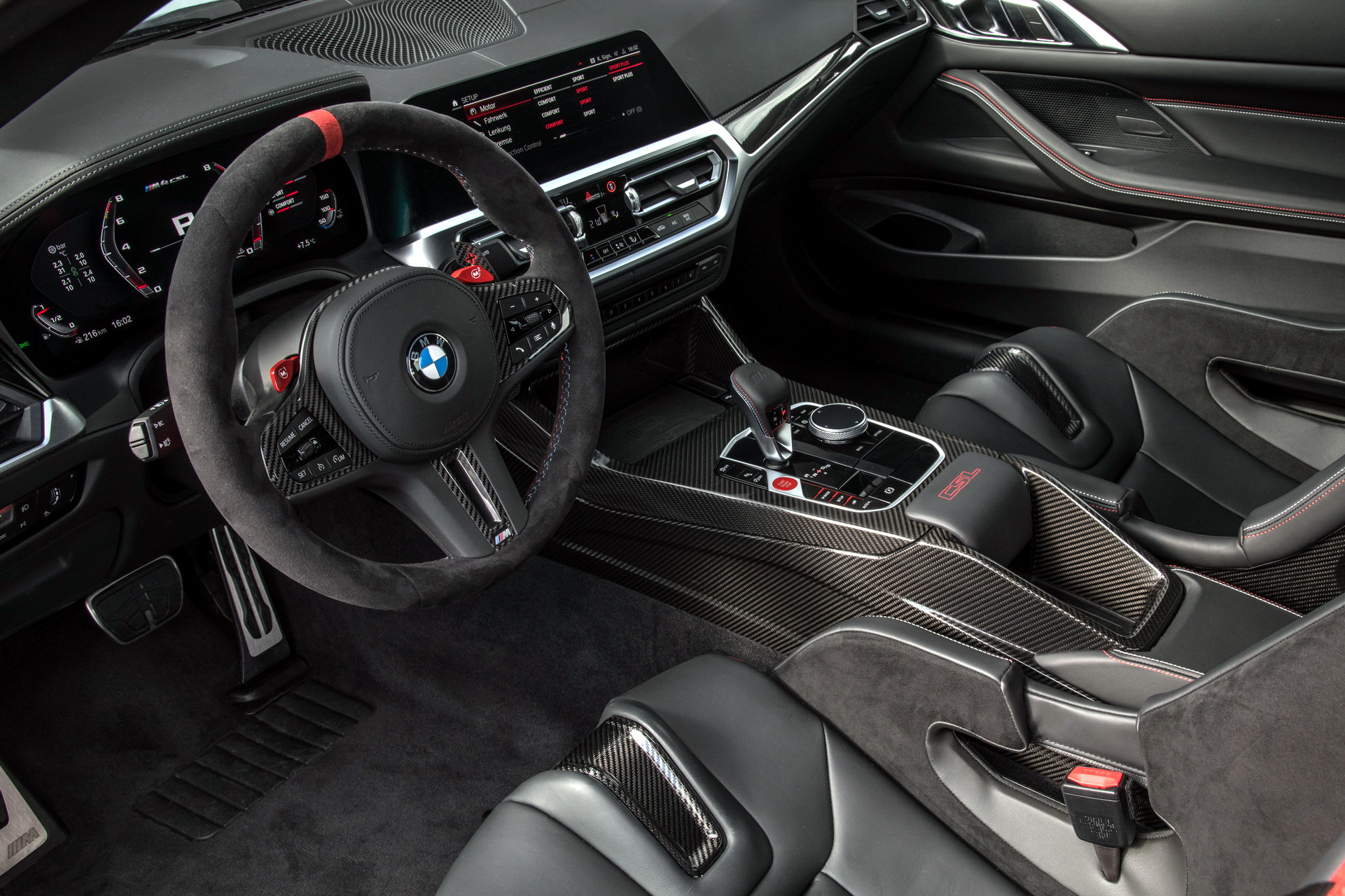 Unlike the new M3 interior updates, the M4 CSL won’t be getting BMW’s latest Curved screen. Instead, the highlights of the interior are the M Carbon full bucket seats and a carbon fiber center console, both of which are exclusive to the CSL.

Impressive as they are for a track-inspired car, the afforementioned seats may not be appreciated by your significant other. They have no backrest angle adjustment, and the height can only be adjusted in a workshop. The headrests are easily removed though — for when you’re wearing a helmet. hardcore.

Related: 2023 BMW 3-Series Touring Looks Even Better Than The Sedan

BMW evidently realized that the lack of adjustability might not be to everyone’s tastes, so the option of heated M Carbon bucket seats with full power adjustment are available as a no-cost option. While they don’t offer the 53 lb weight saving of the full carbon buckets, they’re still 21 lbs lighter than what you’d get in the M4 Competition.

Not For Shrinking Violets 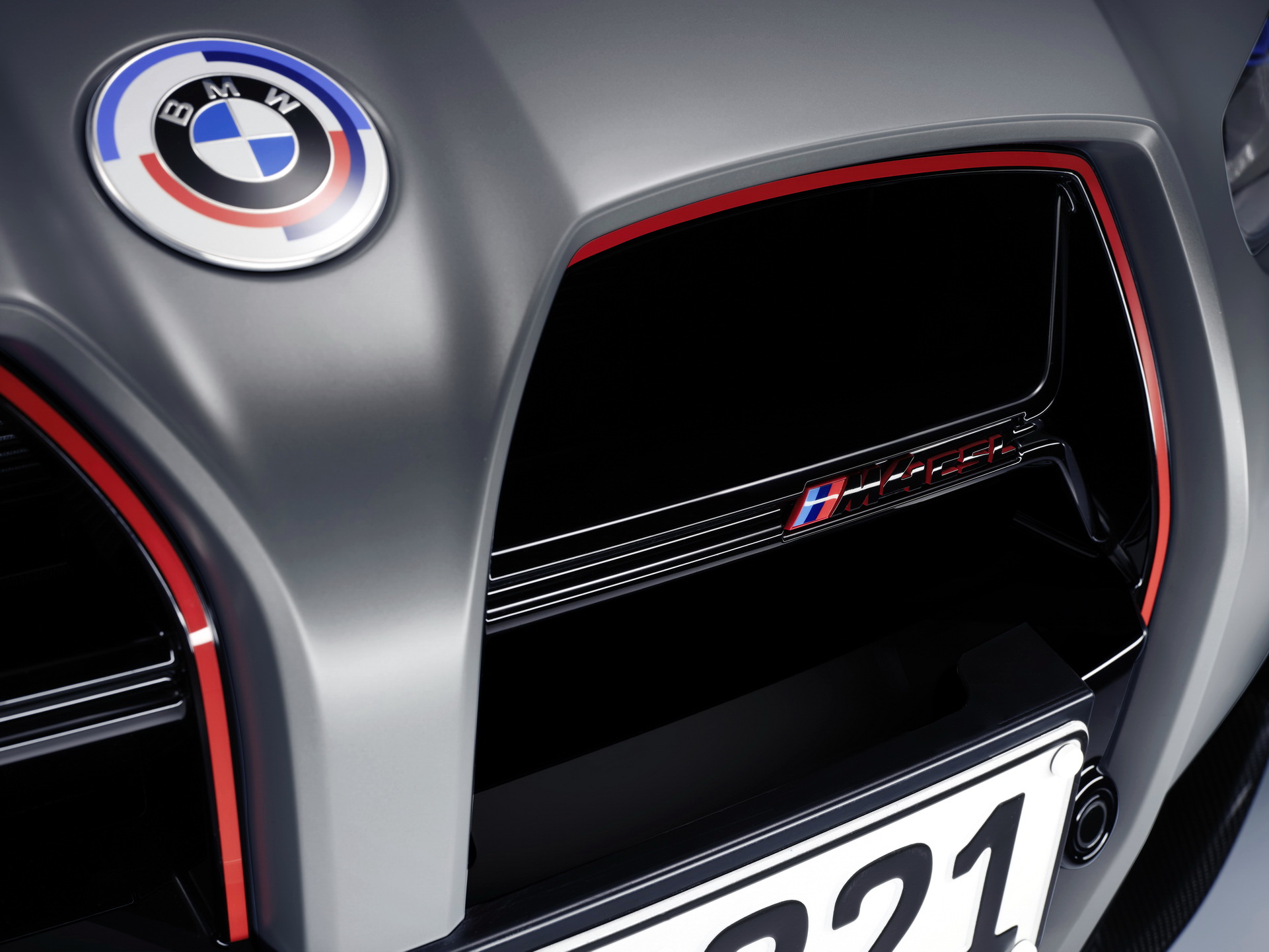 The front end is just as imposing as you’d expect, with the new grille featuring less elements in the name of — yes, you’ve guessed it — saving weight. More red accents feature on the snout, while the daytime running lights illuminate in yellow, mimicking GT racing cars, much like the M5 CS.

The rear end features new LED rear lights, with the “BMW Laser”: tech debuting on the CSL. The back is also garnished by a ducktail spoiler, calling back to the E46 M3 CSL. 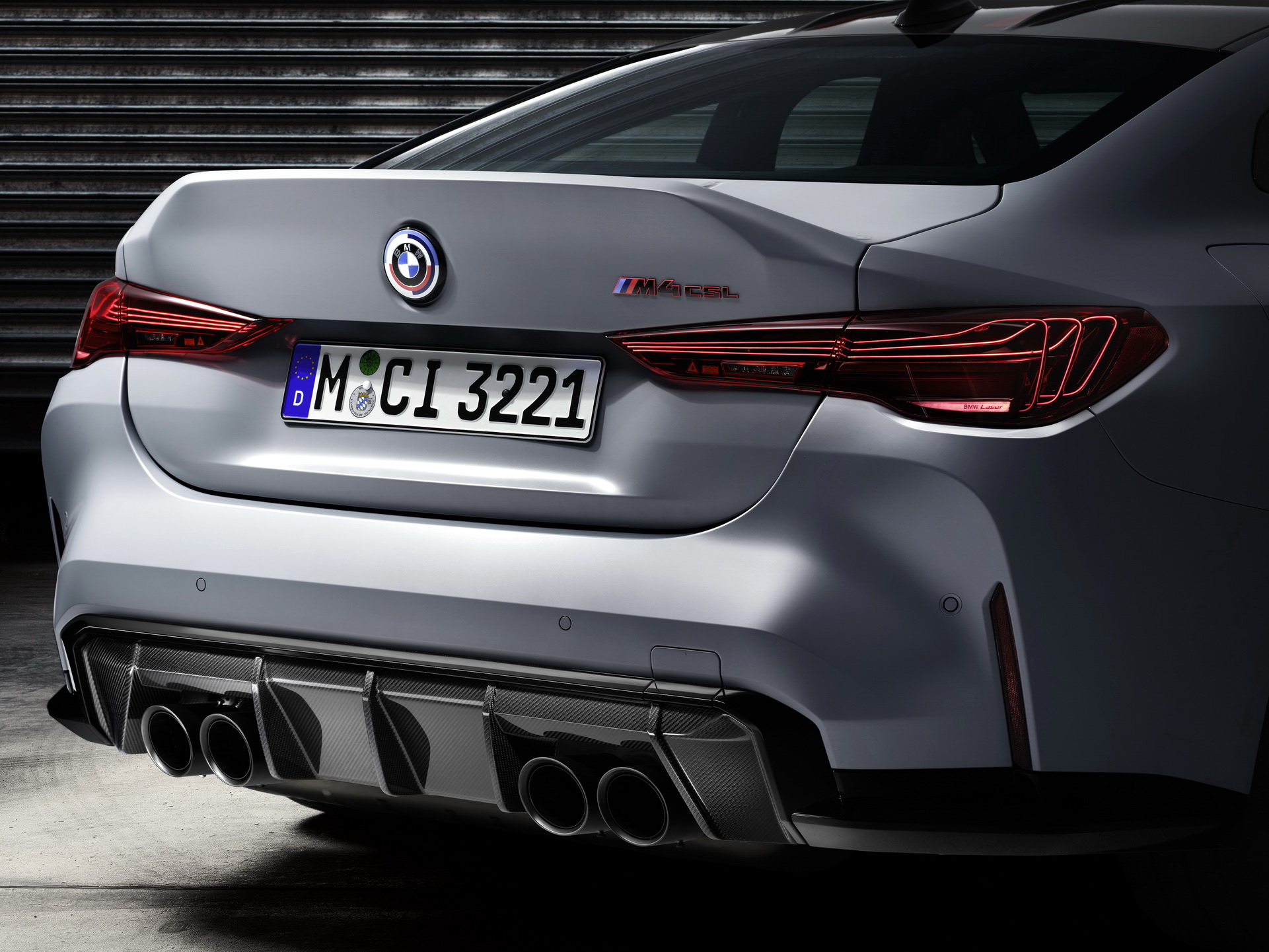 With production starting in July 2022, if you want one of these, you might want to put your order in sharpish — the M4 CSL will be limited to just 1,000 units worldwide.

Pricing starts at $139,900 plus a $995 destination charge. That’s a significant bump over the $74,900 starting MSRP of the rear-wheel drive M4 Competition Coupe. In fact, it puts the M4 CSL in Porsche 911 Carrera GTS territory.

While the M4 CSL is undoubtedly a different overall package to most else out there, would you sink your money into one, given the chance? Let us know below.