The second day of the Superbet Rapid & Blitz Poland, the second event of the 2022 Grand Chess Tour, continued today with outstanding results by GM Viswanathan Anand and GM Richard Rapport. The pair surged ahead of the field after they scored 2.5/3 and 3/3, respectively, during Friday’s three games.

Day two began with a number of fascinating matchups including a showdown between the Polish number one and two as well as So versus Aronian, two of the highest-rated players in the field.

Fans of Anand waited with fervent anticipation to see if the Indian megastar could replicate his day-one form, allowing him to win all of his games. He did not disappoint, keeping his perfect run going with a fine win over a struggling Shevchenko.

Shevchenko bravely played the Sicilian Defence, Chelyabinsk Variation against Anand and the two followed a game from 2019 between IM Guillermo Vasquez and FM Alberto Mascarenhas up until move 15 before Anand diverted. Shevchenko gave up his e-pawn in order to drum up some play through the center. Anand called his opponent’s bluff and castled queenside, turning his d-pawn into a protected passed one. Liquidation ensued and Anand cruised to yet another win.

The duel between Wojtaszek and Duda saw the surprising Modern Defense employed by the 2021 World Cup winner. Duda was able to keep his nose slightly in front throughout the game and gained a passed pawn as the players crossed move 40. Notably, the players only had 30 seconds left and played the remaining 32 moves using little more than their increment in thinking time. Wojtaszek seemed to have the position under control until an untimely gaffe on the 69th move, which Duda capitalized on to win the all-Polish standoff.

So and Aronian played a wild game where the compatriots left their patriotism at the door. With the Olympiad looming and the US boasting five players rated over 2750 (at the time of writing) So felt it necessary to put his best foot forward with the white pieces. An exchange sacrifice and a passed pawn almost got the job done, but resolute defense from Aronian allowed him to remain on his feet when the dust settled.

Report bulldozed Gavrilescu’s position in their game today. After casting kingside in the King’s Indian Attack, the Hungarian GM marched his g- and h-pawns up the board, creating space for his queen and rook to infiltrate. Gavrilescu valiantly marched his king to the center and then up the middle of the board in an attempt to escape, but Rapport’s pieces chased the king, eventually checkmating the young IM on e2!

Korobov was a brick wall for Caruana, who agreed on a draw in just 28 moves, the two swapping pieces quickly and deciding to stay fresh for the fifth round.

Round five was a successful one for players with the black pieces, with all three decisive results going the way of the second movers.

our Game of the Day is an absolute masterpiece by Anand, who took down Aronian in 24 moves with Black! Although Anand has been brilliant throughout, this game is certainly the magnum opus of his event thus far.

Not to be forgotten amidst the “Madras mania,” Rapport’s win against Caruana with the French Defense was an instructive example of a good knight versus a bad bishop. Given that Rapport has played the French with regularity so far in the event, it is likely that Caruana was well prepared. Rapport appeared to be boxing himself in on the kingside as the American GM piled on the pressure, but the passive facade ended up being a creative disguise from Rapport, who used the opportunity to exchange into a comfortable ending.

So continued his run of good form in round five, vanquishing Duda with the black pieces in the Berlin Defence. Reaching a slightly worse albeit sufficiently imbalanced position, things went south for the Polish GM after 25.Rb1. Though the move looked to challenge So’s queenside pawns, the tricky American was able to perfectly execute a refutation that included a “brilliant” move.

Gavrilescu finally got on the board after scoring a straightforward draw against Wojtaszek, playing a near-perfect game on the white side of the Sicilian Defense: Canal, Main Line.

Meanwhile, countrymen Shevchenko and Korobov also battled in a Sicilian but preferred the more theoretical Najdorf Variation. The players traded into an opposite-colored bishop and rook ending and proceeded to poke and prod for 25 moves. When neither player found a way to make progress, the players traded rooks and agreed to a draw.

For the first time in the event, signs of exhaustion began to kick in during the third and final round of the second day. Although only one game was decisive, the other drawn results were hard-fought and all went down to the wire.

Rapport was the sole winner of the round, taking down the assiduous Korobov with the venomous King’s Indian Defense. Rapport was able to procure the bishop pair early, while Korobov had to make do with two knights, both understanding the intricacies of the imbalance. Korobov decided he had to be aggressive and began focused on pushing his passed d-pawn but suffered from tunnel vision and missed a classic Rapport tactic.

Excitement seems to be following Anand wherever he goes in this tournament, and with a six-game streak on the line, it was inevitable that his final game of the day would be one to watch. Duda opted for the French Defense, which has undoubtedly become the most popular opening in the tournament so far, and the pair followed a game played by IM Ravi Haria and GM Gawain Jones from the 2021 English Rapidplay Championships.

The line included an interesting exchange sacrifice for White, obviously feeling more comfortable in the position than commentators Tsatsalashvili and Pruess did for him. Anand found a way to surgically insert his king into a controlling position deep in Duda’s camp, but the Polish GM was equally adept at managing the complications. The two eventually reached a drawn ending, but it was not without several tense moments with mere seconds left on Duda’s clock.

The other three draws to finish the day were relatively uneventful. However, Gavrilescu notably held So to a draw, which is almost certainly one of the Romanian IM’s best results to date in a FIDE-rated game. Shevchenko was tempted to play on against Aronian but decided that his connected passed pawns did not justify risking anything other than a perpetual check against his lofty opponent.

The second day of results has set up for a thrilling chase on day three where Rapport will try to surpass Anand’s score. The two are due to play in the ninth and final round where the trailing Hungarian will take the white pieces. With 18 rounds of blitz to follow in the remaining days of the tournament, there will still be many chances for players in the pack to challenge the lead. 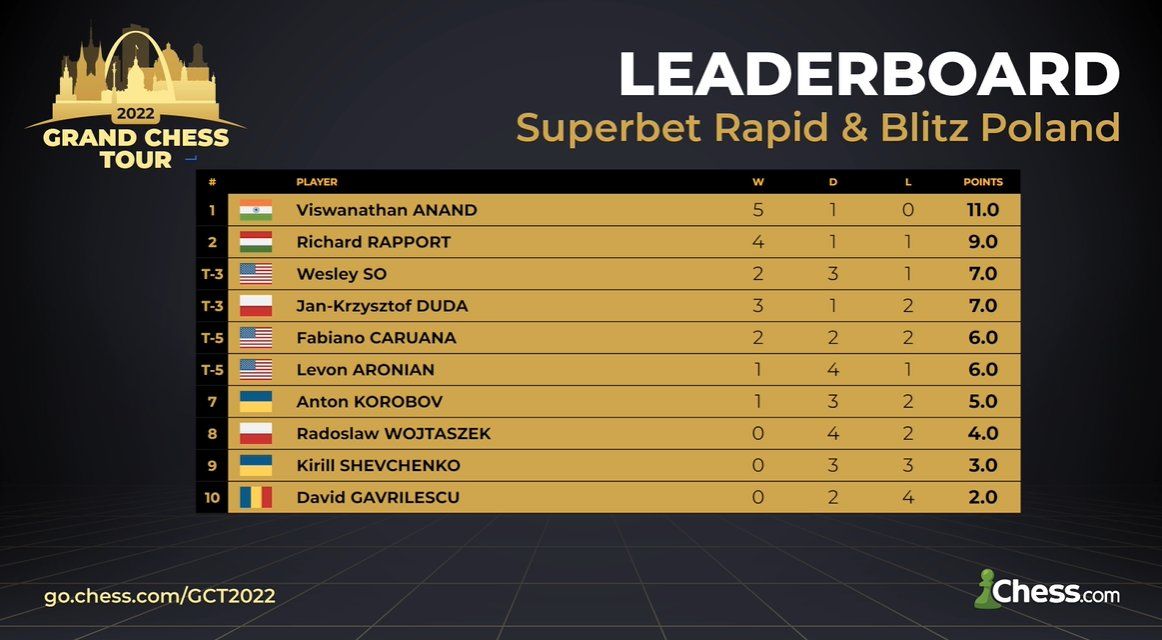