The Superbet Rapid & Blitz Poland, the second event of the 2022 Grand Chess Tour, continued on Saturday. GM Viswanathan Anand was confirmed as the tournament leader after scoring six wins, two draws, and one loss and winning the rapid section.

GM Richard Rapport was the one player able to beat Anand and did so in the final round to secure second place while GM Jan-Krzysztof Duda won 2.5/3 on the final day to advance into third place. The US contingent finished in the next three spots, with GMs Wesley So, Levon Aronian, and Fabiano Caruana each separated by a point.

The final day of the rapid portion of the tournament commenced with several key matchups, including tournament leader Anand taking on bottom seed IM David Gavrilescu, Rapport facing off against GM Radoslaw Wojtaszek, and the top two American players—Caruana and So—battling each other .

Anand scored the first victory of the day, outplaying his Romanian opponent and playing as Black in the Scotch Game: Schmidt Variation in yet another miniature. The position was relatively tame until move 16 when Gavrilescu made three consecutive inaccuracies while audaciously attempting to take advantage of Anand’s isolated c-pawn. While the young IM spent valuable tempo on this plan, Anand focused on piece activity. When Gavrilescu’s plan fell through, it was ironically the c-pawn that ended up giving Anand a decisive advantage. It was planted on c3, and resignation followed.

The pressure was on Rapport, closely following Anand on the leaderboard, to keep pace, although a win against Wojtaszek was a challenging task to start the day. Rapport opted for an unusual version of the Delayed Alapin, moving his light-squared bishop twice in the opening to trick his opponent into a Sicilian Dragon-esque setup.

The position stayed almost equal as the two tip-toed around the position before Wojtaszek complicated the position with a committal central pawn break. He likely felt bullish about his drawing chances as pieces flew off the board but missed a key tactic that allowed his back rank to be targeted. The Pole was forced to sacrifice the exchange and immediately resigned at the prospect of groveling in a losing endgame.

Aronian got back to his winning ways in round seven, this time defeating GM Anton Korobov with a brave return to the setup he employed in his day-two slaughtering at the hands of Anand. Korobov came out of the opening comfortably, but the Ukrainian made a one-move gaffe soon after, missing a key resource that allowed Aronian to win a piece and stabilize the position.

Korobov’s previous move 30.Bxe4 was a trick intended to win a pawn. Aronian responded with 31.Bb8!, winning a piece.

The likely top boards of the esteemed US team for the upcoming Chess Olympiad, Caruana and So, played 92 moves in the Berlin Defense before they agreed to a draw in an opposite-colored bishop ending. So gained a small positional edge in the early middlegame but missed an obscure pawn break on move 24 that the engines deemed necessary to turn the edge into a quantifiable advantage.

Curiously, the long-winded game between the American superstars was not even the longest of the round. It was outdone by a 125-move grinder between Duda and Shevchenko. The two played the “Quiet” Variation of the Schallopp Defense, a line in the Slav, and the early parts of the game certainly lived up to the variation’s name.

The players reached a same-colored bishop-and-rook ending and, after minor complications, traded into a rook and bishop versus rook tablebase draw. Shevchenko, who had the lone rook, showed exemplary technique to draw by the 50-move rule. Amazingly, the players played 94 moves without a single inaccuracy, two moves longer than any of the other games so far.

The two leaders, who were destined to play in the final round of the rapid later in the day, first had to fend off equally testing opponents in the eighth round, which saw four decisive games and a sole draw.

Anand challenged Caruana in the Petrov’s Defense, and the pair followed a 2018 drawn game between GM Alexandre Danin and GM Andrei Volokitin for 16 moves. Anand quickly landed a knight on the f5-square and threatened to begin pressing, but Caruana set up a solid position. Unwilling to risk his lead against the tournament’s highest-rated classical player, Anand sacrificed the exchange several moves later and forced a perpetual check. See if you can find each of Anand’s moves below.

Against So, Rapport played the King’s Indian Defense, setting up for a thrilling clash between the two chess giants. After Anand’s quick draw, the Hungarian clearly sensed the opportunity to close the gap and created chaos on the board that helped him gain a three-pawn advantage. A one-move gaffe with ample time on the clock cost Rapport, however, and turned a -3 position into a +8 position in favor of So. GM Dejan Bojkov has the tough job of explaining the artistic encounter in our Game Of The Day.

Gavrilescu was on the hunt to capture his first win of the event against Shevchenko. The Romanian IM countered his opponent’s King’s Indian Attack by ripping open the queenside and staking his claim in the center. The position was tricky though, and with both players under a minute on the clock, Shevchenko outmaneuvered Gavrilescu, whose position swiftly unraveled.

At the lower end of the leaderboard, Wojtaszek managed to score his second win of the event over Korobov who has also had a rough tournament. Wojtaszek gained an early advantage with the black pieces in the Sicilian Najdorf and found a brilliant positional knight move that left Korobov reeling. The Ukrainian GM was soon at the mercy of his opponent’s active pieces and traded into a bishop-and-rook ending where he was down two pawns. The deficit was too much, and Wojtaszek surgically removed any chance of a swindle.

Aronian has had mixed results in the tournament so far, and he became a casualty in round eight after an 83-move struggle against Duda. Down a pawn in an opposite-colored bishop endgame, Aronian blundered away a worse, albeit potentially savable position.

Going into the final round, Anand had a three-point buffer on his nearest chaser, Rapport, with the two due to play against each other in the final round. Rapport, who has played outstanding, Romantic chess throughout the event so far saved his best until last, conquering the unflappable Anand.

A quick win by Duda in the ninth round allowed the Pole to insert himself into third place. He dismantled Korobov’s King’s Indian Defense after Korobov locked up his own kingside. This gift Duda free reign to thematically press on the queenside, and even a classic Rf4 exchange sacrifice offer was not enough to save the out-of-luck Ukrainian.

Aronian finished on a high after a comfortable win over Gavrilescu. Playing as Black in the Scotch Game, the American came off better after a series of middlegame trades that left him with a bishop against a knight in an open endgame. The invaluable experience that his young opponent gains from such games will hopefully give him the confidence to steal some points from the top players during the blitz portion of the event.

So was happy to draw with Wojtaszek and stay within striking distance of the leaders heading into the blitz games. So’s score of 11 points puts him four points shy of Anand. Given his ranking as the sixth-best blitz player in the world, So will be quietly confident.

Shevchenko tried to press against Caruana in the final round with the black pieces but was unable to make inroads into Caruana’s position. The world number-three was not in the mood for fighting and swapped pieces into an endgame he was able to draw, finishing in a disappointing sixth position after the rapid portion.

Saturday’s proceedings leave the tournament wide open with 18 high-voltage games of blitz to follow in the coming days. Will Anand be able to continue his vintage run? Will Rapport outfox his more classical opponents? Tune in on Sunday to find out. 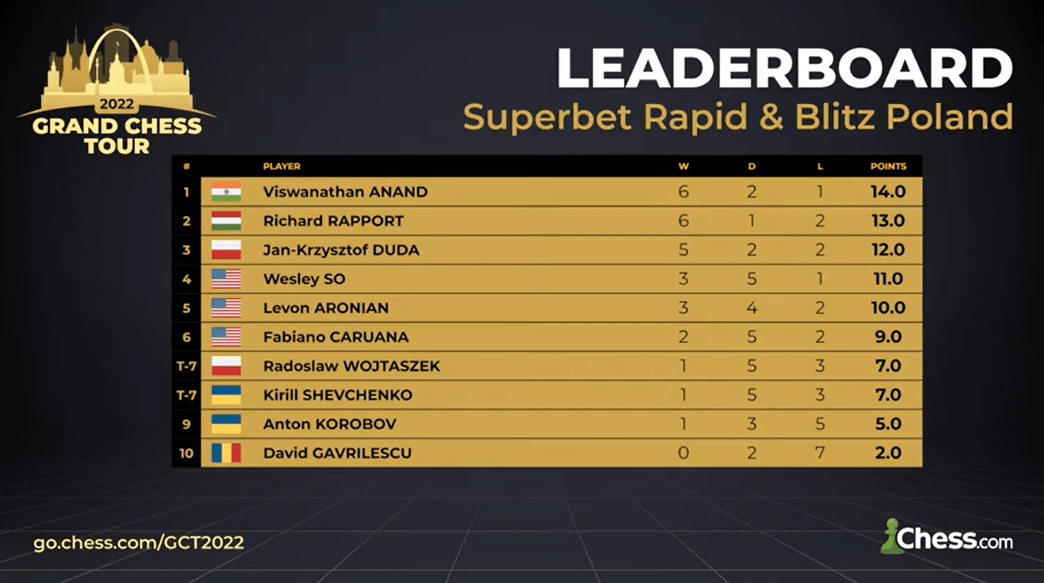