Scoring 3.5/4 on Saturday, GM Anish Giri is the new leader at the 2022 Meltwater Champions Chess Tour’s Chessable Masters. Second-ranked GM Magnus Carlsen tried the remarkable 1.h4 and drew his game with GM Wei Yi, who is now in third position.

How to watch? The games of the 2022 Chessable Masters can be found here as part of our live events platform. The rounds start each day at 9 am Pacific/18:00 CEST.

“I came in today thinking everything was going to be great, and it turned out well so I’m lucky,” said Giri after what was indeed a good day of chess for the Dutch grandmaster. He first defeated his compatriot GM Jorden van Foreest and then also GM Abhimanyu Mishra and GM Vidit Gujrathi while drawing with GM Sam Shankland.

The game with Van Forest started well for Giri but became very unclear later. The double-rook endgame was drawish when one of White’s rooks was suddenly trapped:

His best game might be the win against Vidit in round 12 that ended Giri’s day. The theme of “cutting off the king” in the rook endgame is perfectly demonstrated:

As Wei had a bad day at the office (two losses, two draws), Carlsen also leapfrogged the Chinese player in the standings. Their mutual game, also in round 12, saw 1.h4 as the first move by the world champion, who had tried 1.f3 and 1.c3 earlier in the Tour.

Carlsen said his opponent defended well in this game, adding: “It was a bit of a disappointing way to end the day. I think if you’re going to play a rare first move, it’s no less important to be well prepared.”

After looking at that silly first move for not too long, the reader is advised to jump to the rook ending that turns out to be a tablebase victory with a nice winning method:

On Sunday, three more rounds will be played, and then it’s all about finishing among the top eight. Norway’s number-two GM Aryan Tari still has chances to qualify for the knockout after an excellent third day with a draw and three wins.

Tari was tactically sharp, as can be seen from his game with Van Foreest and also his quick win against Shankland: 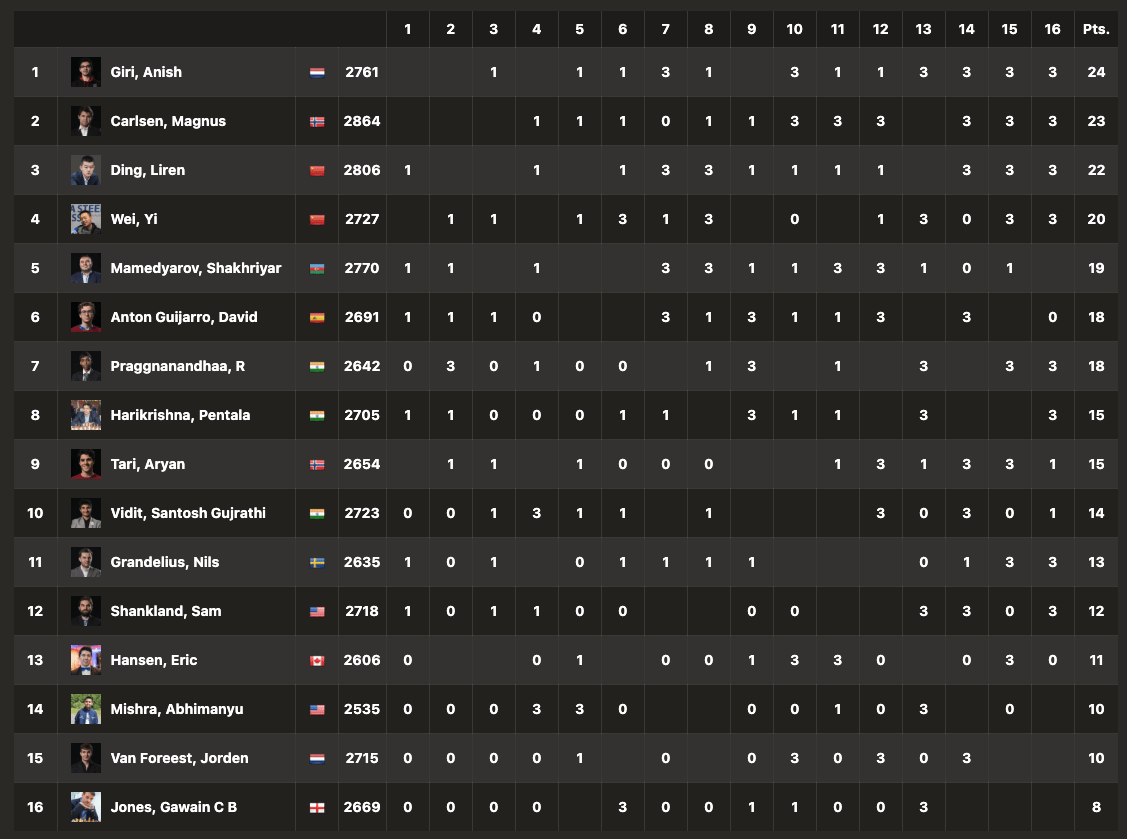 The 2022 Champions Chess Tour’s fourth event, the Chessable Masters, runs May 19-26, 2022 on chess24. The preliminaries are a 16-player round-robin from which the top eight qualify for the knockout stage. The time control is 15 minutes plus a 10-second increment; the scoring system is three points for a win, one for a draw, and zero for a loss. The prize fund is $150,000.