“I don’t know if what we have is love, but it’s on my mind,” Drake sings, in “Talk To Me.” This lyric has haunted me over the last year. It perfectly encapsulates one of my favorite subjects: those relationships that seem loose, that remain untitled by mutual unspoken agreement, but in which every moment and sign is keenly meaningful, so that some half-hour conversation from two weeks ago takes on a circling and relentless weight. Like many love stories, these seem less about love between two people than about the slippery traction between where you’re both coming from and what you’re both going through.

It’s a pleasure to encounter a book that acknowledges how romance lives in one’s mind, and attempts to chronicle those unsteady, urgent movements. Here are eight favorites of mine that use the mirage of love and the presence of another person to get at something crucial and messy in oneself—from Updike’s controversial 1968 novel couples to this year’s lovely Sheila Heti novel, Pure Color.

The flaming, brilliant first book that comes to mind when I think of this lyric. Leilani’s novel is about much more than Edie’s relationship with Eric, the colleague with whose marriage she becomes knottily involved, but at its heart it tracks the way Edie follows her uncertain and shifting relationship with Eric—and then his wife, Rebecca—ever deeper, shifting to and from attraction, need, fascination, gratitude, pity, and tenderness. A power differential between Edie and Eric that at first appears simple comes to seem, by the close of this book, quaint and nostalgic when replaced by the reckonings Leilani confronts, both in the couples’ marriage and in Edie’s life and sense of herself. Not a love story, but a story about the vicissitudes of ardency and love, with teeth. 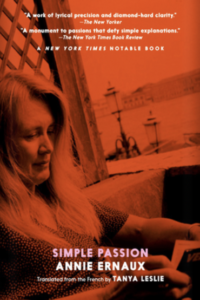 “As soon as I heard A’s voice, my long, painful wait, invariably tinged with jealousy, dissipated so quickly that I felt I had been mad and had suddenly become sane again.” Time is the tyrant of this book. Ernaux’s brief, unbelievably rich memoir is not a love story but the story of experiencing a love affair, an experience which is more than anything else one of being alone in a room, waiting for love to happen. Her lover, a married diplomat whose call from a telephone booth she eagerly awaits, is far less present than the afternoons she spends thinking of him, the dresses she buys in anticipation of his attention, the apartment which remembers and misses him, and the precious sound of his Renault 25 as it approaches. A book about the form obsession occupies inside, when we are alone with our reality. 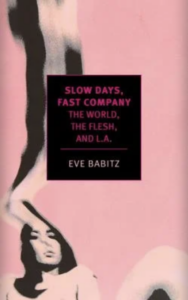 I can never forget the first line of this book: “This is a love story and I apologize; it was inadvertent.” For Babitz, a love story always requires a bit of apology, since love stories have had too much airtime and there is so much else (LA, gossip, swimming, clothes, driving, friendship, party-going) that concerns her—but romance , when it gets in the way, can’t be resisted. The men in her writing, and her life, are never as interesting as she is, but they serve an important purpose. She deliciously describes the excitement of the sharply-dressed stranger who arrives in a period of boredom. And she has absolute respect for the architecture of the affair itself, which she memorably names as the crowning creative adventure in most of our lives—our single chance “to touch the face of heaven.” 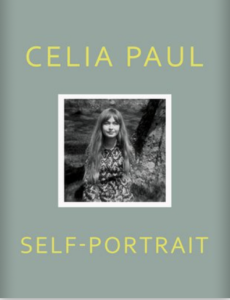 Rare, stark, at once subtle and raw: an unmatched expression of what it is to be simultaneously a woman and an artist. Paul’s künstlerroman is deeply intertwined with the figure of Lucian Freud, who, thirty-eight years her senior, was at first her mentor, then her lover and the father of her son. Her feeling for Freud, fluctuating over more than a decade, contains within it her initial repulsion from him, her confused discomfort at acting as his muse, her determination to avoid being subsumed into motherhood, and simultaneously her admiring and compassionate loyalty toward him. Their relationship is one of deeply ingrained roles—the muse and the artist—which tremble and twist over the years. “I too felt that my growing love for Lucian was more like a sickness,” she writes early on in their relationship. “I resolved to try and forget about him and to re-establish my ambition.” 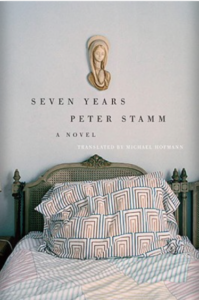 At once measured and incandescent, a book that interrogates how desire and love emerge from, and in opposition to, the terms in which we define ourselves. Alex, a comfortably married man and father of two inhabiting a successful upper-class life, finds himself mysteriously drawn to Ivona, a woman with whom he seems to have little in common and who he consciously disdains. He is haunted by Ivona’s attraction to him, which has nothing to do with his social identity: she is blindly and unselfconsciously devoted to him. Ivona’s love “had been embarrassing, just like the idea of ​​being seen in public with her, but even so the thought of her love had something ennobling about it,” Alex recounts, in a passage that frequently floats through my mind. “I kept thinking of her, and I knew that I would have to see her again, if only to free myself from her.” 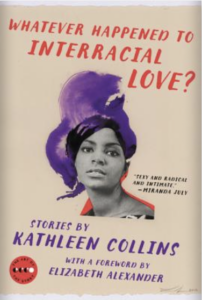 So many stories in this collection see Collins observing and recording the shape love takes in the midst of everything that gets in its way—family, city, time, movement, politics, and the irrepressible demands and attractions of other people. She stares without flinching at the terrific highs and lows which attend relationships (“if one is willing to admit that romances are a bit like balloons”), the contagious energy of new love and the slow dawning of its impossibility. My favorite line, in “Exteriors,” perfectly expresses that occasional brutal fear which apparently isn’t mine alone, that I am a curse on the person I love: “sometimes I get the feeling that when I’m dead happiness is gonna rise up out of your soul and wreak havoc on life…” 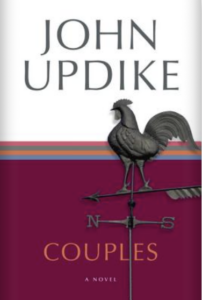 A novel apparently about sex, couples is actually about something much more interesting: how adultery itself—“its adventure, the acrobatics its deceptions demand, the tension of its hidden strings, the new landscapes it makes us master”—can breathe life into a prematurely settled existence. Though he describes a number of affairs among the couples of Tarbox, Updike follows most closely behind Piet, whose womanizing is never premediated but who falls into one affair-adventure after another, believing his talent is that he genuinely loves every woman he touches. Sincere and special in the way it expresses how we explain ourselves to ourselves, and deeply forgiving of our failings, especially when they occur in the service of reanimating a life. 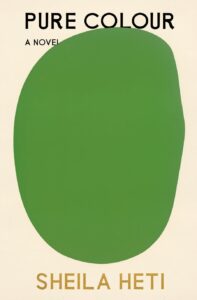 Among Heti’s writing on grief, art, criticism, God, and life itself, I found myself intrigued by her portrait of the relationship between Mira and Annie, who experience a confused attraction to each other. Mira, a bird-like woman who cares most of all for art and beauty, reveres Annie, who, like a fish, is devoted to a social project of collective good. Yet both of them lack the talent for love possessed by that third type Heti describes, the bear-like people. “To properly love another—this is the stumblingest part of [Mira], the most nonsense part, the part of her that is most scattered and always to blame.” I love this story about how hard we work at moving outside ourselves when we find something to admire, and how freeing it is to recognize the value of our particular talents, our way of loving the world, even if we remain stumbling and inexpert in loving another person. 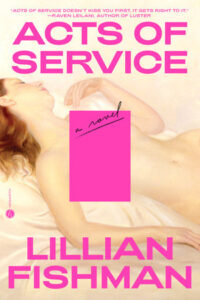 Acts of Service by Lillian Fishman is available through Hogarth Press.