Chicago Dance Crash is one of many companies performing at Spring to Dance.

Open Mic: A Story Time
Got a story to share? join a Moth-Inspired Storytelling Night at Spine Indie Bookstore & Cafe (1976 Arsenal Street, 314-925-8087, spinebookstorecafe.com) where you can hear and share true, compelling first-person stories. The Moth is a national storytelling podcast, radio show and live event series. Spine’s event, which happens the second and fourth Thursday of every month, allows people to tell one-off stories or workshop a story for audition to be on The Moth† The next Moth-Inspired Storytelling event is Thursday, May 26, from 6 to 10 pm Admission is free.

A Tour Through China
You won’t often come across films more visually striking than A New Old Play† The scenes are filled with dazzling aesthetics that appear real but dissolve into delightful stage magic. You see people bobbing in a boat that you then realize is a stage set. You think you are overlooking a village, but it is actually a carefully crafted miniature. The spectacular visuals are all staged as is the life of the film’s protagonist, Qiu, a famous Sichuan opera “clown” (based on filmmaker Qiu Jiongjiong’s famous grandfather). After Qiu dies and goes to the underworld, he retraces a life shaped by war, famine, turmoil and hardship. But what does it add up to now that he’s dead? A New Old Play is part of the Webster University Film Series and is Friday, May 27, at 7:30 pm at Winifred Moore Auditorium (470 East Lockwood Avenue, 314-968-7487, events.webster.edu/group/webster_university_film_series) . Tickets are $6 to $8. 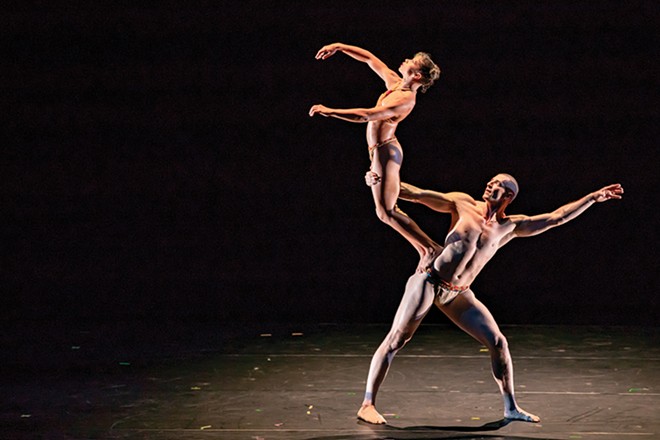 Pilobolus will perform at Spring to Dance.

Dance Showcase
For Dance St. Louis’ Spring to Dance, 18 companies perform their best work in a three-day-long showcase. You can see tap from the Chicago Tap Theatre, ballet from Philadelphia Ballet, beautiful acrobatics from Newsam Aerial Dance, and Cirque du Soleil-inspired dancing and acrobatics with incredible set pieces from DIAVOLO. Each day, a different mix of companies performs, and no matter what day you pick, you’re sure to have some jaw-dropping moments. Spring to Dance is Friday, May 27, to Sunday, May 29, at the Blanche M. Touhill Performing Arts Center (1 University Boulevard, 866-516-4949, dancestlouis.org/emerson-spring-to-dance-festival-2022). Doors open at 5:30 pm, lobby performances at 6 pm and main-stage performances at 7:30 pm Tickets are $10 to $75.

Paint Outside
More than 60 artists will be on hand for Schlafly’s Art Outside Festivalhosted by Schlafly Bottleworks (7260 Southwest Ave, 314-241-2337, schlafly.com)† The event includes photography, ceramics, wood working and jewelry. Get detailed black-and-white prints from KneeHigh Prints or a “One Hell of a Lady” shirt from Golden Gems. Of course, there will also be beer; Schlafly is bringing out all the summer favorites including Just A Bit Hazy IPA, Pale Ale, Raspberry Hefeweizen and Classic Proper Cider. Art Outside is Friday, May 27, from 4 to 10 pm; Saturday, May 28, from 11 am to 10 pm; and Sunday, May 29, from 11 am to 4 pm Admission is free.

Who’s That Singer?
The weirdest singing competition on TV is coming to St. Louis.

The Masked Singer National Tour is based on Fox’s show The Masked Singer, where celebrities don outrageous costumes and sing while judges try to guess their identities. Natasha Bedingfield, who performed on season six as a giant pepper, will host the show. The touring show will feature one St. Louis celebrity and other favorite characters. The Masked Singer National Tour is Saturday, May 28, at 8 pm at the Stifel Theater (1400 Market Street, 314-499-7600, stifeltheatre.com/events/detail/the-masked-singer-national-tour). Tickets are $36.75 to $496.

Art from the Ancestors
the St. Louis African Arts Festival (314-325-2291, stlafricanartsfest.com) was founded in 1991 as a way to celebrate African culture and educate people on global cultural contributions from Africa and the African Diaspora. The festival is held in Forest Park and includes vendors, food, children’s activities, and dance and music showcases. The St. Louis African Arts Festival is Saturday, May 28, from 10 am to 8 pm; Sunday, May 29, from 11 am to 8 pm; and Monday, May 30, from 10 am to 6 pm at the World’s Fair Pavilion in Forest Park (1904 Concourse Drive). Admission is free.

Memorial Day To-Do’s
It’s Memorial Day and, in our experience, there are two responses to the holiday. One is to honor American soldiers who gave their lives for their country. If that’s you, check out the free Memorial Day Commemoration at the St. Louis Soldiers Memorial Military Museum (St. Louis Soldiers Memorial Military Museum and Plaza, 314-818-6780, mohistory.org/events/memorial-day)which starts with a wreath laying at 11 am If you’re on the east side, you can check out the free Memorial Day Parade and Ceremony in downtown Belleville, Illinois (parade route along North Third Street, ending at Hough Park, belleville.net)which steps off at 10 am and concludes with a ceremony at Walnut Hill Cemetery (1101 Mascoutah Avenue) at 11 am The other response to the holiday is just celebrating a day off work. If that’s you, the St. Louis Cardinals are taking on the San Diego Padres at Busch Stadium (700 Clark Avenue, 314-345-9600, mlb.com/cardinals/ballpark) at 1 pm (The door giveaway is Cardinals cornhole bags.) Tickets are $20 to $311.

Bust a Move
Bastille’s latest album, Give Me the Future, is its most electronic album to date and also its most ambitious. Songwriter Dan Smith came up with the album’s concept before the pandemic and wrote most of the album with his band during lockdown. The concept? An unscrupulous tech company blurring the boundaries between reality and virtual life. A little on the nose. You can jam out IRL to Bastille and special guest Sarah Jaffe on Tuesday, May 31, at 8 pm at the Factory (17105 North Outer 40 Road, 314-423-8500, thefactorystl.com). Tickets are $39.50 to $114.50.

Shakespeare Is Back
If you’re walking through Forest Park and hear two people squabbling in iambic pentameter, that’s just Beatrice and Benedick from St. Louis Shakespeare Festival’s Much Ado About Nothing† This enemies-to-lovers comedy is about a group of friends who convince an always-arguing twosome to fall in love. It also has fake deaths, unrequited love, a masquerade and people being jilted at the altar. You know, tons of laughs. Somehow Shakespeare does make it funny and obviously it all ends happily ever after. Much Ado About Nothing is at Shakespeare Glen (6604 Fine Arts Drive, stlshakes.org/production/much-ado) from Wednesday, June 1, to Sunday, June 26. Preview nights are June 1 and 2, and opening night is June 3 The glen opens at 6:30, show at 8 pm Tickets are free, but bring your own chair. You can reserve a seat or box for $20 to $300.

Gerald Ramsey is Mufasa in The Lion King.

Hakuna Matata
Puppeteers, dancers and actors bring Disney’s The Lion King to life in this live action musical. Follow the adventures of young Simba as he tries to find his way after his father dies. His journey helps him find friends and love. Disney’s The Lion King is at the Fox Theater (527 North Grand Boulevard, 314-534-1111, fabulousfox.com/events/detail/lion-king) from Wednesday, June 1, to Sunday, June 19. Showtimes are Tuesdays, Wednesdays , Thursdays and Fridays at 7:30 pm; Saturdays at 2 and 7:30 pm; Sundays at 1 and 6:30 pm (There is no 6:30 pm performance on Sunday, June 19.)