An all star commentary team

The Ragozin is being played by every top grandmaster in the world – it is time you also add it to your repertoire to get interesting and dynamic positions against 1. d4!
GM Alejandro Ramirez analyzes every single move that White can play once the Ragozin is reached, but due to several transpositional possibilities he always emphasizees strategic goals to keep in mind.

The Superbet Chess Classic Romania is sponsored by Superbet Foundation, One United and First Bank and features a 10-player round-robin battle for a total of $350,000 in prize money.

The Superbet Chess Classic Romania will be held in Bucharest, Romania at Sheraton Bucharest Hotel from May 5 – May 14, 2022 with rounds beginning daily at 15.00 EEST (14.00 CEST, 08.00 ET). It will include all nine full tour players and one wildcard player, Romanian Grandmaster Bogdan-Daniel Deac. 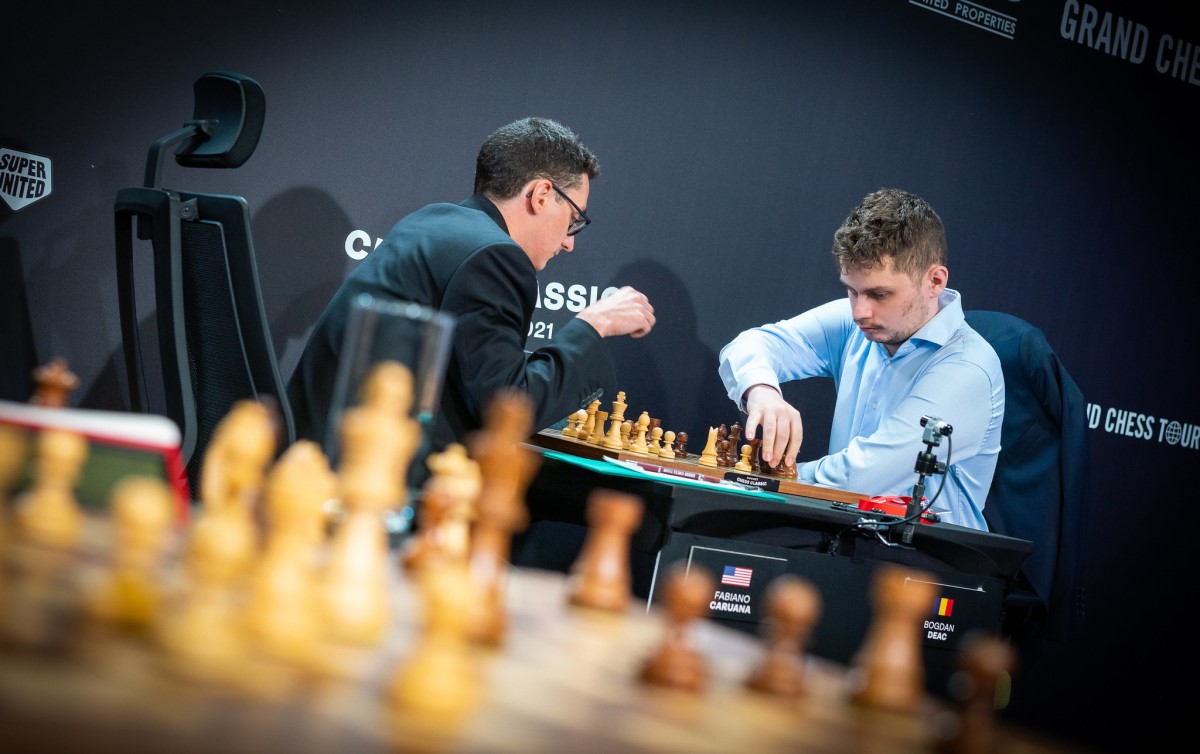 Fabiano Caruana facing Bogdan-Daniel Deac in the final round of the 2021 edition | Photo: Lennart Ootes

About the Grand Chess Tour™

The Grand Chess Tour is a circuit of international events, each demonstrating the highest level of organization for the world’s best players. The legendary Garry Kasparov, one of the world’s greatest ambassadors for chess, inspired the Grand Chess Tour and helped solidify the partnership between the organizers. All Grand Chess Tour 2021 events will comply with local and regional COVID-19 restrictions. For more information about the tour, visit grandchesstour.org.

About the Superbet Foundation

Founded in 2019, Superbet Foundation is a non-profit organization. Its role is to coordinate Superbet Group’s CSR activities and to connect with civil society organizations and the general public. Through its activity, the Foundation strives for a better world, with healthy and educated people and by supporting various projects it wants to inspire people to hold unbreakable moral values. It supports projects in domains like education, health, culture, performance in sport and, most notably, in chess. Since 2019, chess has become one of the backbones of Superbet Foundation by organizing its first tournament of the Grand Chess Tour in Bucharest. The Foundation is committed to turning GCT tournaments into a tradition for the Romanian and Polish chess communities. For more information, visit superchess.ro.

About the Saint Louis Chess Club

The Saint Louis Chess Club is a non-profit, 501(c)(3) organization that is committed to making chess an important part of our community. In addition to providing a forum for the community to play tournaments and casual games, the club also offers chess improvement classes, beginner lessons and special lectures.

Recognizing the cognitive and behavioral benefits of chess, the Saint Louis Chess Club is committed to supporting those chess programs that already exist in area schools while encouraging the development of new in-school and after-school programs. For more information, visit saintlouischessclub.org.

The Ruy Lopez is one of the oldest opening which continues to enjoy high popularity from club level to the absolute world top. In this video series, American super GM Fabiano Caruana, talking to IM Oliver Reeh, presents a complete repertoire for White.