The 2022 IM Not A GM Speed ​​Chess Championship continued on Thursday with the one of the event’s most anticipated clashes, IM Eric Rosen vs. Levi Rozman. The two world-class content creators met in the quarterfinals for a rematch of last year’s showdown and this time Rosen was able to ascend to victory with a 12.5-7.5 score.

The match followed predictions early on with the two staying neck and neck throughout the 5+1 games, but it was Rosen who pulled ahead in the middle stages of the match. Rozman was unable to recover due to Rosen’s punishing form and the latter proved that he is a force to be reckoned with in the competition.

The next match in the IMSCC will be the quarterfinal matchup between IMs Alina Kashlinskaya and Lawrence Trent, which begins on June 3, at 4.30 am Pacific / 13:30 Central European.

The hotly anticipated match began in style with an outrageous queen sacrifice from Rozman taking place in the very first game. After Rosen gained a slight edge against Rozman’s English Opening, he succumbed to a blunderous moment that allowed Rozman to swoop in with the stirring tactic.

Know as zwischenzug, the interposing move floored Naroditsky and Hess while viewers on Twitch and Youtube spammed the chat with exclamation marks.

Like previous encounters between the two creator-juggernauts of the chess world, the early parts of the match were close to even. The players traded wins with White for the first five games, which began turning the match into what seemed like a perfectly scripted spectacle.

With Black, Rozman consistently played an interesting line in his pet Caro-Kann, repeating a knight’s tango from b8 to d5 in the Gurgenidze System. He typically constructed reasonable positions, but Rosen was more accurate under time pressure with the white pieces early on.

Game six was the first time that either player was able to win with Black and it was Rozman’s Gurgenidze that got the job done. Although Rosen built a significant advantage heading into a rook and bishop endgame, Rozman cleverly tricked his opponent with a passed pawn, blockading a bishop between the pawn and an attacking rook and assuring its promotion.

Despite winning the seventh game, Rosen was only able to come within one point of his opponent, due to the 5+1 portion match clock running out after an odd number of games. With the scores at 4-3 to Rozman, it was looking more and more like the match would turn into a classic.

The 3+1 segment started in the best way possible for Rosen, with the American IM capturing the first two games including a 24-game miniature. Regardless of whether Rosen had found a refutation to the Gurgenidze Variation during the break or Rozman capitulated on his own, the two games felt to be a turning point of the match.

Rozman mentioned in the post-match interview that he felt like a “deer in headlights” in the early stages of this section and highlighted two key factors that led to his dip in this period. The second of these points credited his opponent, noting: “Eric is unbelievably defensively resourceful.” Rozman went on to suggest that Rosen was “like a brick wall” and that “it takes a monumental emotional and mental effort to actually beat him.”

One game in particular that Rozman was likely referencing here was game 13, where he had gained a considerable advantage out of the Queen’s Gambit Declined: Exchange, Positional Line and continued to play on the front foot. Rozman pushed a passed pawn to the seventh rank and supported it with a rook and knight. Well on his way to scoring a second victory in the 3+1 games, Rosen came out of nowhere with a series of liquidating moves that left Rozman clutching at straws for anything more than a draw.

Although Rosen’s swindle into a draw was not as magnificent as Rozman’s classic from last year’s match (which you can re-live below), it was a game that had a significant psychological impact on Rozman.

Rosen’s tactical prowess was showcased various times on Thursday, but his most exquisite tactical shot came in game 12 where the brilliant 42.Rxe4 exchange sacrifice left Rozman flailing for reprieve.

Although things did not go Rozman’s way in the 3+1 games, the match was still contestable with only a two-point margin separating them ahead of the 1+1 portion.

Unfortunately for Rozman, things did not get any easier and two losses to kick off the final stage left him demoralized. He was able to hit back with a win in the 16th game, courtesy of an adventurous opening swap to the Scandinavian Defense, but the very same opening was his downfall two games later when Rosen overcame him in just 16 moves!

The penultimate game of the match saw Rosen purposely engineer a knight and bishop checkmate, which he smoothly executed without even stopping to think. Rozman, understanding that the match was lost, applauded Rosen for his instructive exhibition of the famous ending.

Rozman scored a final win, his second of the section, in the last game of the match, but it was too little too late for the American superstar, whose opponent, galvanized by last year’s loss, turned up and got his vengeance. The disparate scoreline of 12.5-7.5 showed how dangerous Rosen will be to play against for the remaining contenders in the event, given that his opponent was a finalist last year.

When quizzed about who he would like to play in the semifinals, Rosen was interrupted by Rozman, who hilariously offered to be his “anger translator,” a reference to the viral video featuring Barack Obama and Keegan-Michael Key. 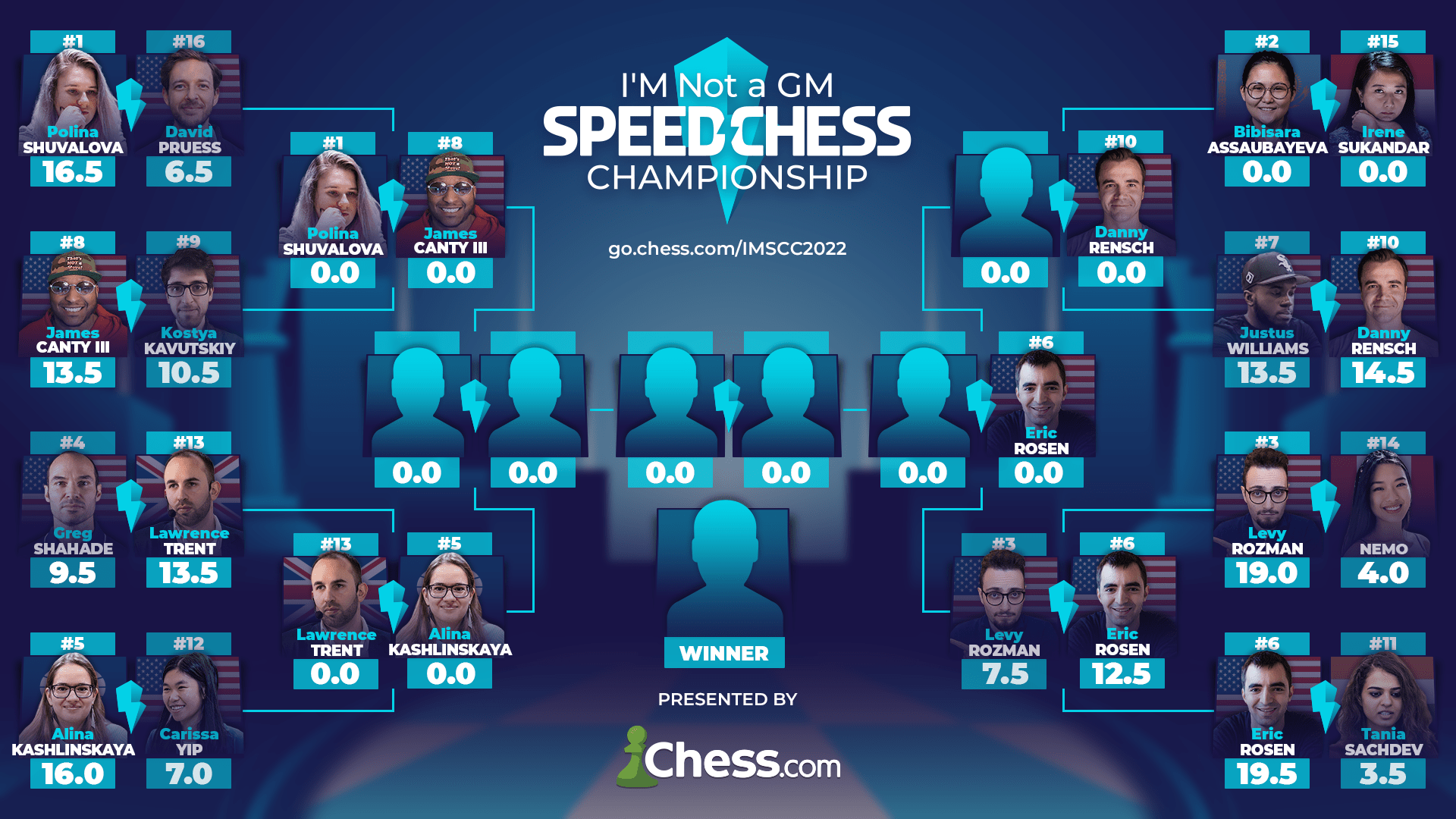 The IM Not A GM Speed ​​Chess Championship (IMSCC) is an online event where some of the strongest IMs and other invited players compete in a series of speed chess matches. Each match consists of a 5+1 blitz segment, a 3+1 blitz segment, and a 1+1 bullet segment, with the player who scores the most points winning the match. If there’s a tie, players play a four-game 1+1 match to decide the winner. If the tie persists, an armageddon game with a bidding system decides the winner.