On May 19, a bit over a week ago, Ukrainian WIM Kateryna Dolzhykova gave a simultaneous exhibition against 16 players at the DZ BANK in Frankfurt am Main. Kateryna fled with friends and family after the outbreak of the war in Ukraine and currently lives in the district of Sachsenhausen. Already settled in Germany, she played two tournaments in the meantime, most recently in Darmstadt at the German Women’s Open Championship 2022 from the end of April to the beginning of May. Her career highlights so far include winning the Ukrainian national championship in 2011 and winning the title again in December 2021. She currently gives regular chess training in the Frankfurt area — she also teaches chess to the DZ BANK chess club.

The charity simultaneous was organized by DZ BANK and the Cultural and Sports Club of the Deutsche Bundesbank. Optimal hosting conditions were provided by a beautiful, large training room in a building of the DZ BANK complex on the Platz der Republik in the heart of Frankfurt. There were 14 participants in the Berlin room on the 5th floor of the Citihaus 2 building. Two participants were connected online and took part in the simultaneous via Lichess.

This mixture of on-site and online presence was an additional challenge for the very likeable Ukrainian. With four representatives, the proportion of women among the participants was above average for chess. The players came not only from DZ BANK but also from Deutsche Bundesbank, Commerzbank and VR Smartfinanz. The level of play ranged from an estimated 1400 up to 2000 Elo.

After a welcome by Ralph Ockert from DZ BANK, the simul started quite punctually at 6 pm. The first game ended at 7.10 pm and was, to the surprise, a loss for the Ukrainian Master. After gaining a piece against the Ukrainian, Timo Blümer won after 20 moves. 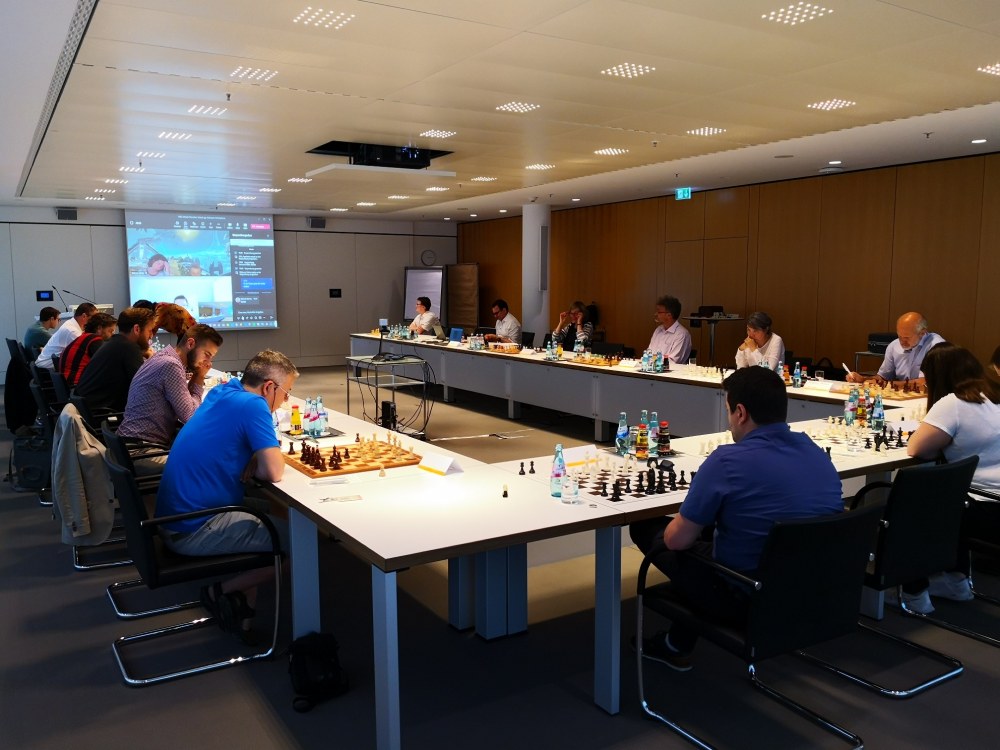 Some other games were quite interesting and also close. Later on, a few promising positions ended up favoring the Ukrainian. Ernö Szivek, Thorben Fromme and Frank Brauer achieved draws against the Woman International Master. 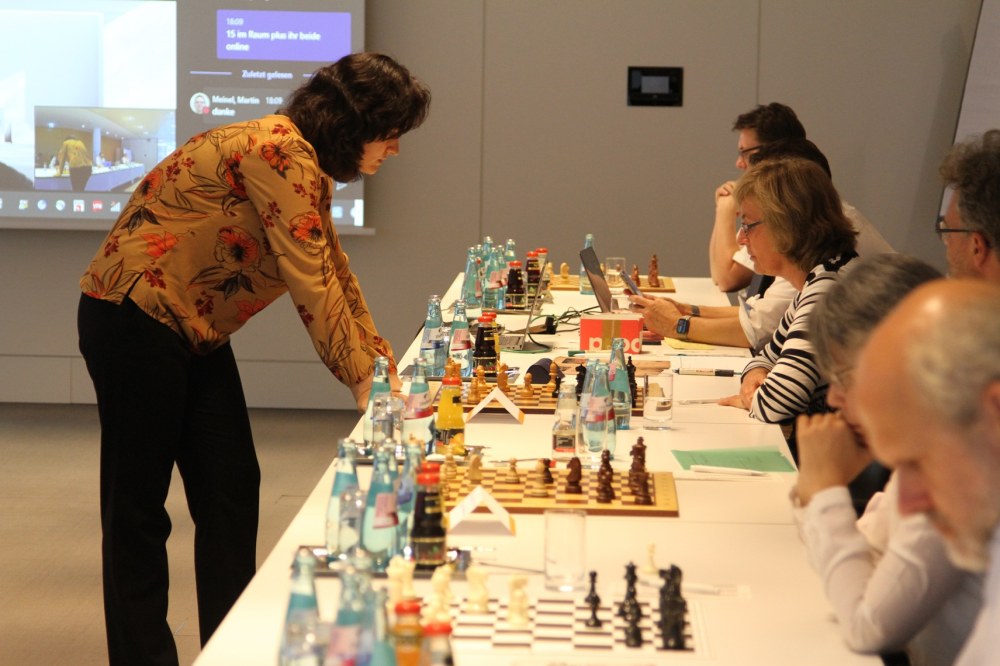 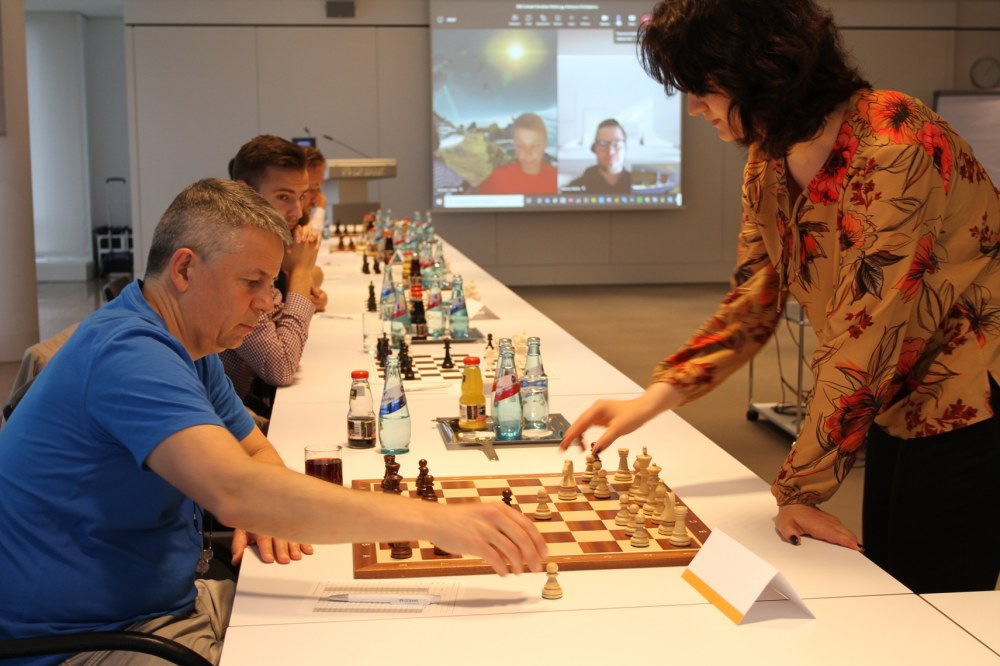 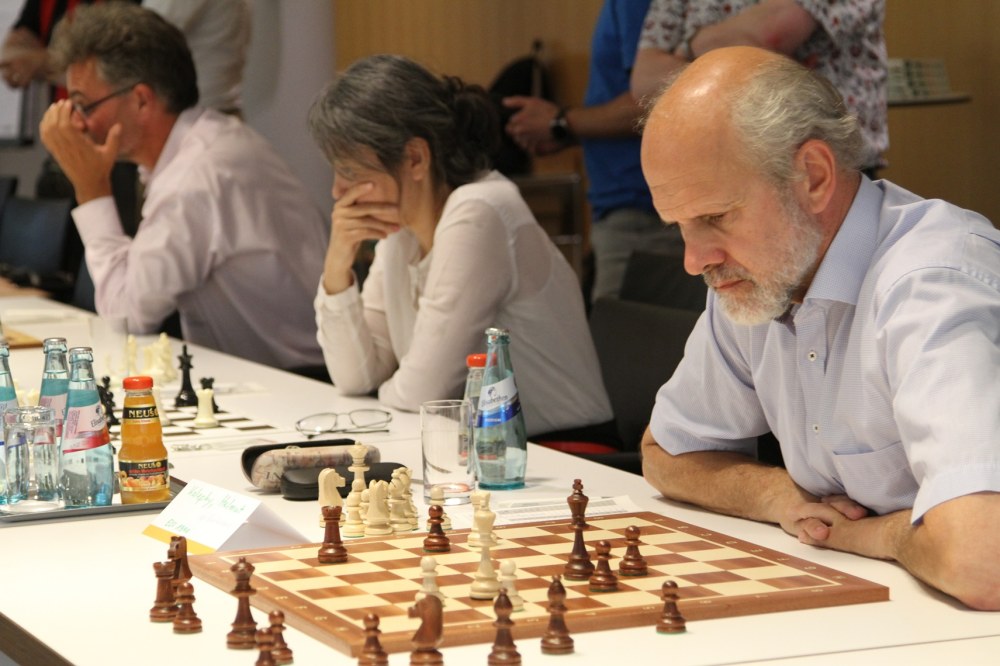 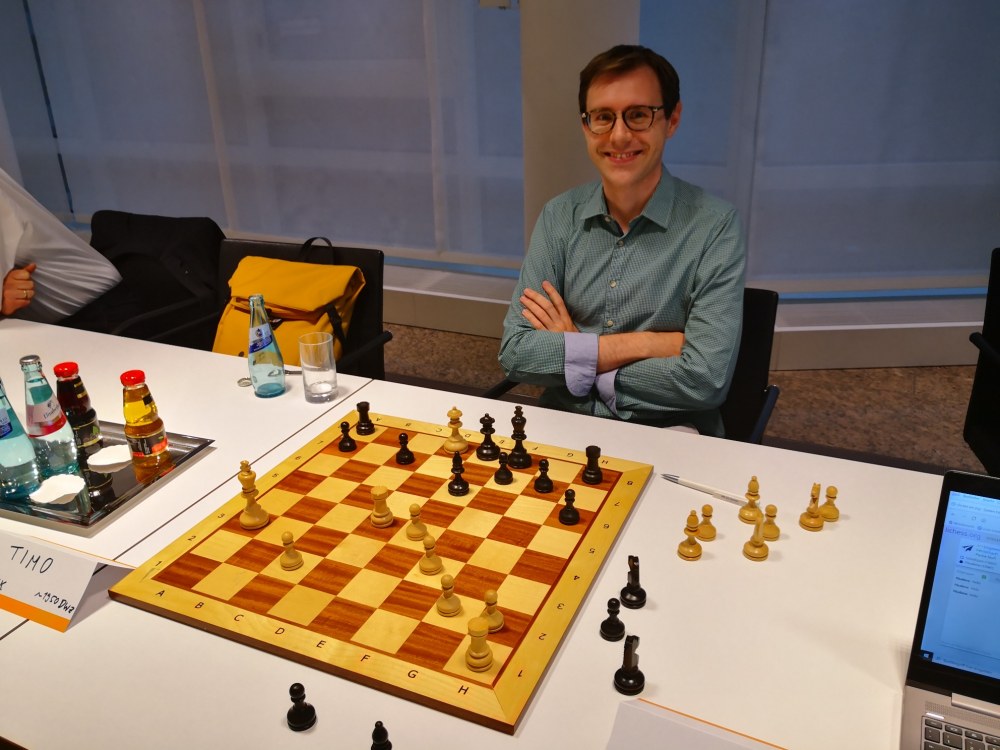 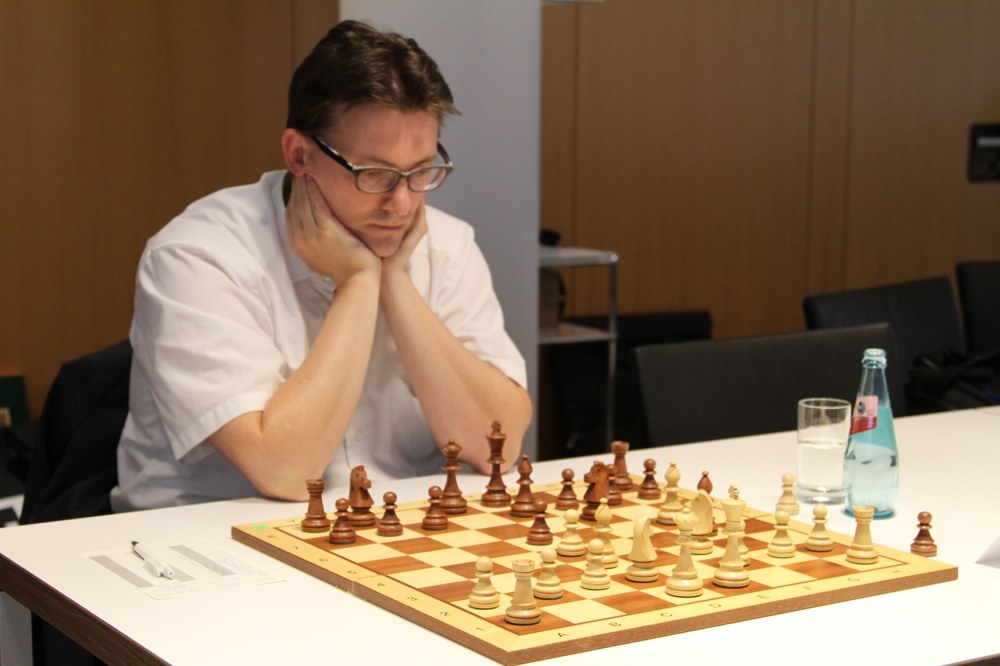 Besides Timo Blümer, the experienced tournament player and veteran Helmut Kalepky also won his game after he had gained an extra pawn before entering a rook endgame. There was also special tension in the match against WFM Gulsana Barpiyeva, which favored Dolzhykova after she played an exciting combination. 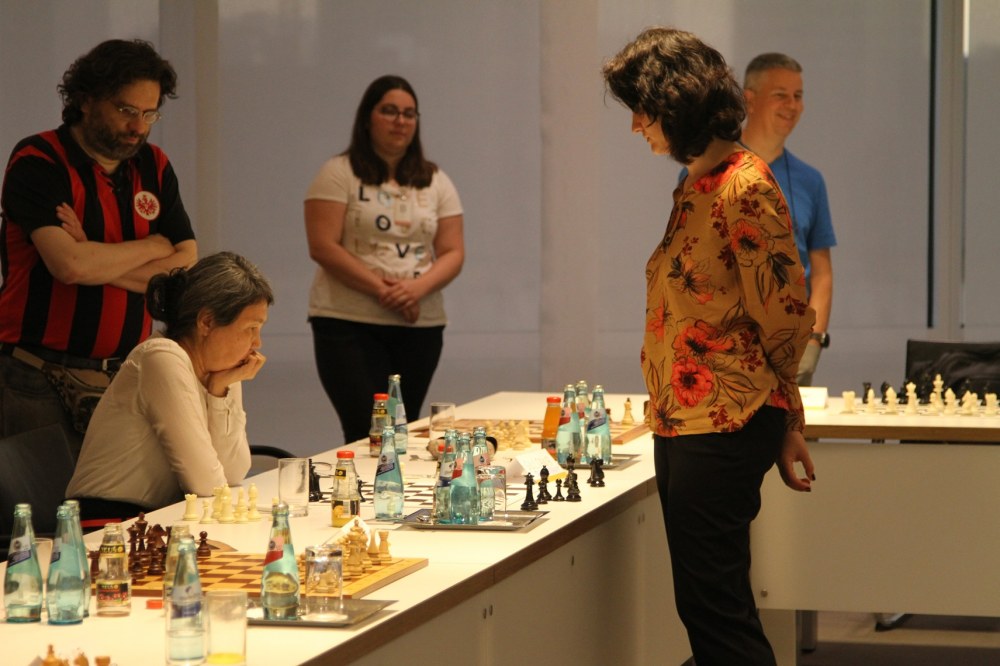 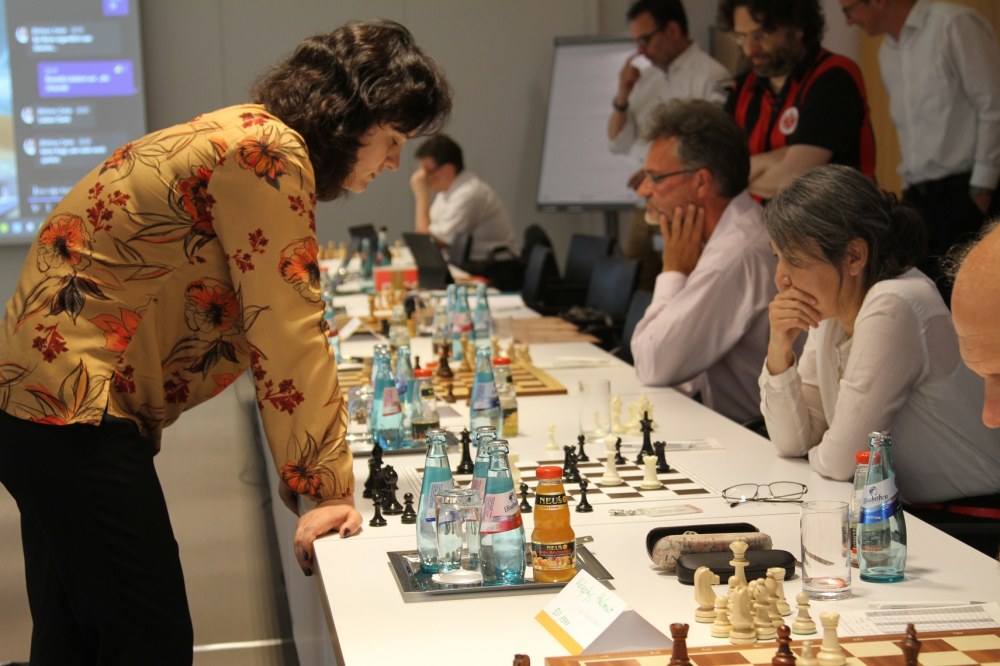 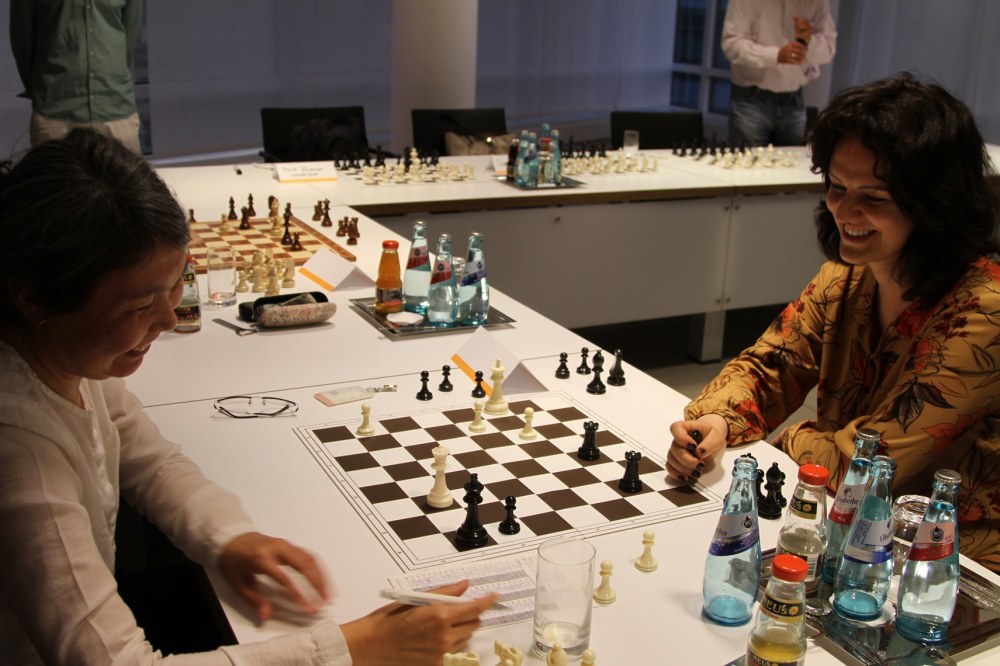 The simul ended at around 9 pm after a good three hours of play in a city that was still in a celebratory mood after the Frankfurt Eintracht won the European Cup. Each participant received a signed certificate. In the second half of 2022, another simultaneous exhibition with Kateryna Dolzhykova is likely to take place. The Ukrainian was very pleased with the contents of a small treasure chest she was gifted. 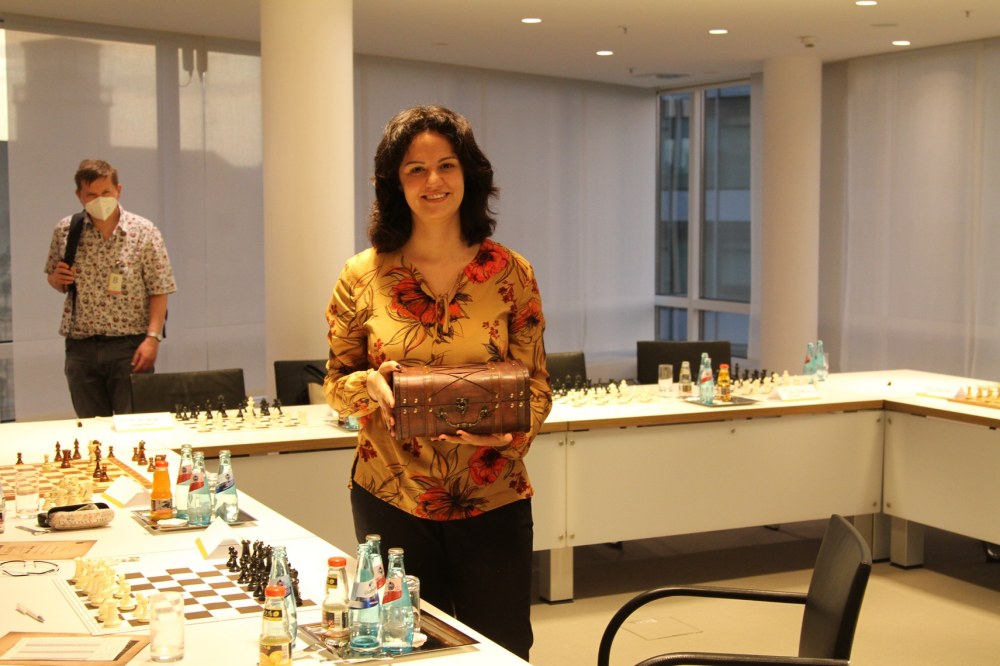 I have recorded a few games, and they can be found in the following small database.