With the top four players in the tournament standings playing each other in round five, the situation at the top of the leaderboard is sharpening further at the 2022 Norway Chess in Stavanger.

The current world champion, GM Magnus Carlsen, said ahead of round five that he would be playing for a win against the former world champion GM Viswanathan Anand. However, in the classical game, it was Anand who was in charge and should have won. The armageddon game, however, was a messier affair, but Anand pulled the longest straw. In the other top game of the round, GM Shakhriyar Mamedyarov beat GM Wesley So in their armageddon game.

These results mean that Anand once again moves into a sole first place with 10 points while Carlsen is right on his heels on 9.5 points. Then follow So and Mamedyarov with 8.5.

With the top games being decided in armageddon games, the results in games in round 5 only meant minor changes at the top of the tournament standings, but the biggest movements happened among the lower-ranked, where two wins in the classical games shifted things a bit around. More about those games below.

Any game between the numbers one and two in a tournament brings extra attention and tension along with the usual nerves. But when the players are the current world champion vs. his immediate predecessor, then we are talking about something entirely different and special. As a chess fan, it sends memories of those battles between World Champions Anatoly Karpov and Garry Kasparov to the surface of the pool of memories.

Carlsen had announced that he would be playing for a win, but that surprised just about no one as he always seems to play for a win, irrespective of who is sitting across the board.

Anand opened with 1.e4 and the players entered a version of the Hungarian Defense, with 4…Be7, that GM Levon Aronian had employed against GM Leinier Dominguez in the fairly recent FIDE Grand Prix in Berlin. However, Carlsen deviated on move 10. After that, White seemed to have a small but clear advantage. This advantage grew steadily as Anand increased the pressure on Black’s position while Carlsen did his best to wiggle free and create counterplay.

After having completely outplayed the World Champion, Anand missed wins on moves 32 and 33, as well as a promising continuation on move 34, allowing Carlsen to finally get off the hook and enter a drawn endgame. A huge disappointment for Anand, but still a demonstration that even Carlsen needs to be at his best when facing a motivated, in-form Anand.

In the armageddon game, the players instead played a line in the Italian Game where Black quickly retreats the bishop to e7. That was about the last thing that made sense in this game. The advantage switched back and forth, from small advantages to decisive ones. But as GM Savielly Tartakower wrote many decades ago: “The winner is the one who makes the next-to-last mistake.” That player was Anand.

It is interesting to see how different a tournament can develop when a player gets the right out of their position and when they do not. In the Superbet Chess Classic about a month ago, nothing worked out for Mamedyarov and the result was one of the worst tournaments of his career. Here in Stavanger, it’s the other way around. He has confidence, takes chances, and attempts things he would not otherwise do, and they work out.

In the classical game, the players went for the line in the Semi-Tarrasch that was also on the board in the round-four game between Carlsen and GM Anish Giri. It turns out, that the stem game was another game between Mamedyarov and So from last year, a game won, after countless mutual mistakes, by So.

Nevertheless, it was So who was the first to deviate, when he played 16…Qxd3. Whether the move actually represents an improvement is a good question, but it means an immediate reduction of material. In fact, it looked like the game was on the way to an early draw as the pieces came off the board in a steady stream. But rather than accepting the inevitable draw, Mamedyarov got inspired to play for more. However, the game was always in balance and, in the end, the result was the predicted draw.

The armageddon game was the polar opposite of the classical game. It was chaos from the outside. Mamedyarov played a dubious line that basically gave Black an advantage from the get-go. That turned around when So did not play accurately in the early middlegame. This allowed White to launch a vicious attack against Black’s king while leaving his own king uncastled.

What followed was complicated extremely but with countless inaccuracies and mistakes on both parts, but clearly entertained the spectators, both those on hand in Stavanger and those following along in the bright light of the computer screens in homes around the world.

I will encourage you all to play through the game if nothing else to see Mamedyarov’s amazing 29.Kf3!! in the middle of his attack. The only winning move in that position.

Games like this one, make us forget the dull technical chess based on heavy opening preparation we saw in the classical game and make the format of Norway Chess such a success. Seeing the engine analysis of the game here on Chess.com is quite fascinating with the moves given in a number of colors based on the computer’s evaluation of the respective move’s strength.

In an Italian Game, the players conducted the kind of shadow-boxing that can be done if both players are extremely alert to the opportunities of the opponent. While Black seemed to have a small plus, equality was never far away. After the queens were exchanged, the game lost most of its luster, and shortly before the time control, the players agreed upon a draw.

For the armageddon game, GM Maxime Vachier-Lagrave opted for the Ruy Lopez instead of the Italian Game. GM Veselin Topalov, satisfied with a draw, went for the Berlin. Vachier-Lagrave went for a minor line with which he has had some experience on both sides of the board.

In a position where Black was under some pressure, Topalov made a terrible decision, dropping a pawn. After that, the French grandmaster took a firm grasp of the game and never let go. Black resigned on move 53 without ever having been close to creating any kind of counterplay or even shades of counterplay.

Both GMs Aryan Tari and Wang Hao had played solid tournaments up to this point but still struggled a bit. Wang, returning from retirement, has the need to knock the rust off the machinery, whereas Tari did not know until about a week ago that he was playing in this event and thus did not have time to do any particular preparation for his upcoming opponents.

In a Three Knights Game with 4.d3, Wang as Black played the sharp 4…h6 and 6…g5!?, announcing his intentions to launch a full-scale attack on the kingside whether White’s king is there or not .

Tari wisely decoded against sending the king in that direction, only much later, move 24(!), castling queenside, joining Black’s king which had castled queenside on move 19. That being said, it was Black who steered the game and had the upper hand. In fact, it wasn’t until after several mistakes by Wang that Tari finally managed to equalize, and when Wang in the last move before the time control (but with reasonable time left on the clock to make the move) blundered with 40.. .d3+??, allowing Tari to win a piece and the game.

Chess can be difficult even when you are rated 2740+.

GMs Giri and Teimour Radjabov were in consecutive rounds the victims of Carlsen’s surge to the top, and now both of them were stuck in the bottom half of the tournament standings and craving a victory, preferably in the classical game, to change their fortune.

Against Giri’s Ruy Lopez, Radjabov went for the solid Berlin, challenging Giri to come up with something interesting rather than heading for the Berlin Wall Variation.

Radjabov picked a solid if somewhat passive continuation, which left White with a small but clear advantage. This turned out to be a seriously bad decision on Radjabov’s part. Giri took control of the game and never let go. The advantage steadily grew and after further mistakes before the time control at move 40, Radjabov’s additional mistake sent the game from dreadful to lost.

An excellent effort on Giri’s part. 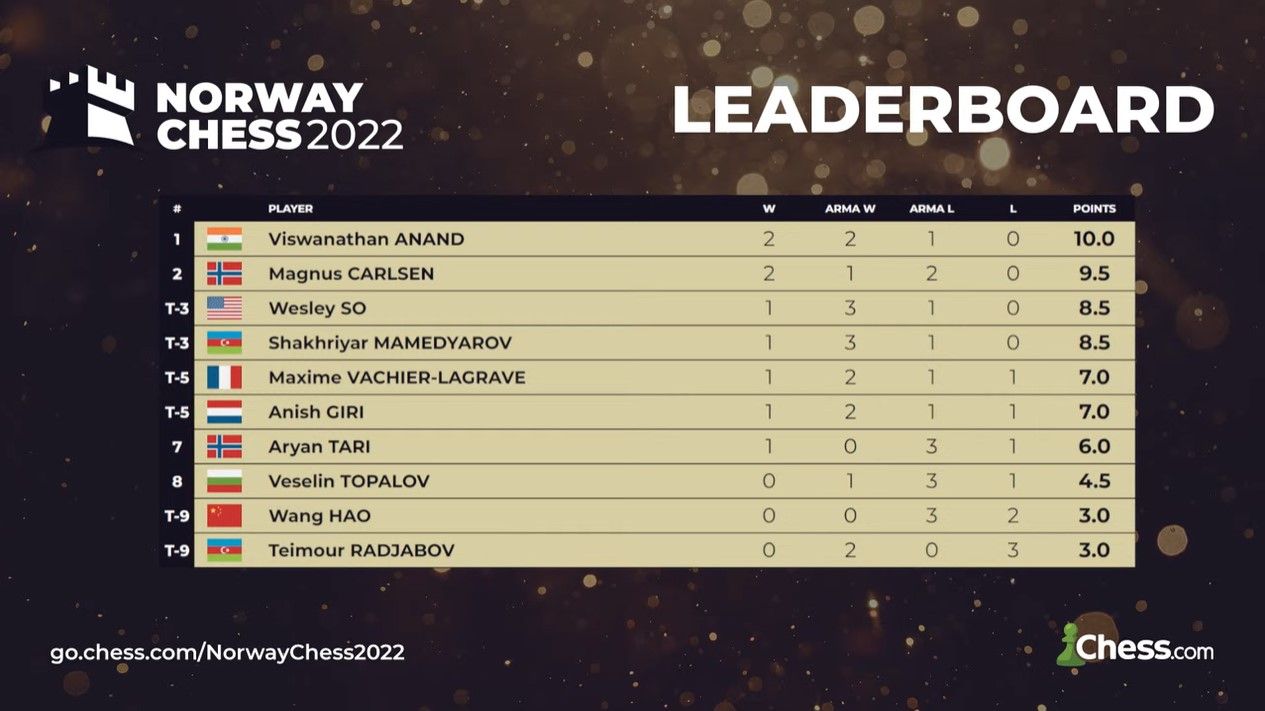 The 2022 Norway Chess runs May 31-June 10, 2022. The event consists of a 10-player single round-robin in a classical time control of 120 minutes for the game with a 10-second increment after move 40. The scoring system is three points for a win instead of the usual one. If the game is drawn, competitors play an armageddon game with the winner scoring 1.5 points and the loser 1 point. The prize fund is 2.5 million Norwegian kroner (NOK).