Serbia’s Novak Djokovic practices ahead of the start of Wimbledon at the All England Lawn Tennis and Croquet Club in London on Wednesday. [REUTERS/YONHAP]

The world’s top tennis players will take to the famous grass courts of London’s All England Lawn Tennis and Croquet Club on Monday as the 2022 Wimbledon tournament begins. But for the vast majority of contenders that aren’t ranked high enough to seed straight into the tournament or earn a wildcard, first there’s the grueling qualifiers to get though.

As of press time, Jang Su-jeong is just one match away from earning a spot at Wimbledon.

To qualify for Wimbledon through the qualifiers, rather than by seed or a wildcard pick, players must win three rounds of qualifying matches.

Jang won her first qualifier on Tuesday, beating Verónica Cepede Royg of Paraguay after putting up a good fight, winning the first set 7-6 after a tie break, then took the second set 6-1.

“It was tough match against good player,” Jang said after her victory on Tuesday.

“I know she is very good player and I just tried every single point and just keep enjoying on the court.” 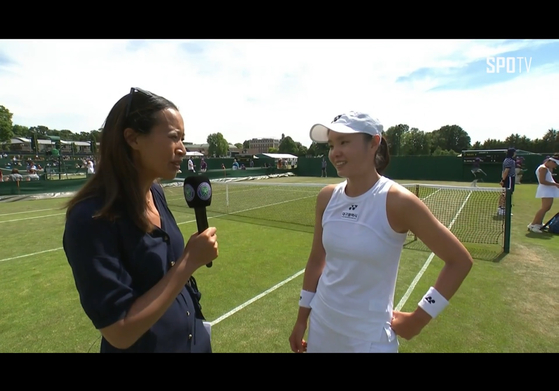 Jang Su-jeong, right, answers questions during a post-match interview after beating Veronica Cepede Royg of Paraguay on Tuesday at Roehampton Court at the All England Lawn Tennis and Croquet Club in London. [SCREEN CAPTURE]

On Wednesday, Jang won her second qualifier against Rebecca Šramková of Slovakia 2-1, conceding the first set 6-3 then winning the next two 6-4, 6-3. Jang is scheduled to play Yanina Wickmayer of Belgium on Thursday for her third round of the qualifiers.

This January, Jang competed at her first-ever Grand Slam event, the Australian Open, although she lost a hard-fought first round game against Danka Kovinic of Montenegro after three hours and nine minutes.

Despite failing to win at her first-ever Grand Slam, just getting there and putting up a formidable fight against a higher-ranked player was an achievement for Jang and Korean tennis. Jang is currently ranked at No. 158 in the world, a huge jump from her previous No. 210 position.

To reach the first round, Jang had won all three Australian Open qualifying matches in straight sets to become the first Korean to play a Grand Slam women’s singles event in two years.

If Jang does make it to the first round of Wimbledon, she will be the first Korean to do so in the women’s singles in 19 years.

The last player to make it to a grand slam before Jang was Han Na-rae, who earned her spot at the Australian Open in 2020 as a wildcard.
Jang is the ninth Korean female tennis player to reach a Grand Slam.

The first was Korean tennis legend Lee Duk-hee, who became the first Korean to play a women’s singles Grand Slam event in 1973, when she reached the second round of the Australian Open. In 1980, she became the first Korean across all genders to have played at all four Grand Slam tournaments in a year. In 1981, Lee reached the women’s singles round of 16 at the US Open, the best a Korean woman has ever done. 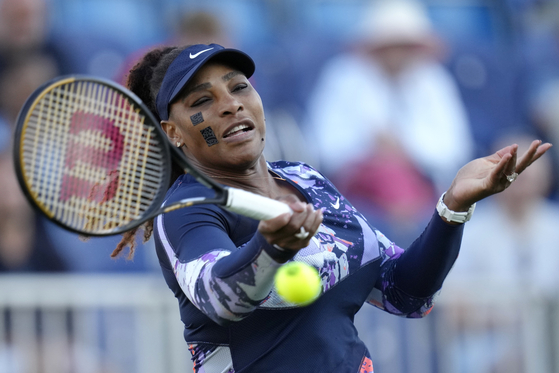 Serena Williams of the United States returns the ball during her quarterfinal doubles tennis match with Ons Jabeur of Tunisia against Shuko Aoyama of Japan and Hao-Ching of Taiwan at the Eastbourne International tennis tournament in Eastbourne on Wednesday. [AP/YONHAP] 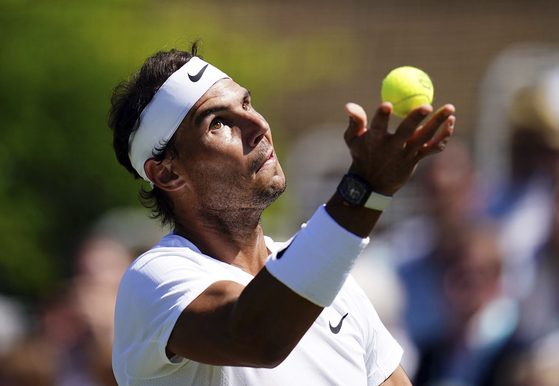 Spain’s Rafael Nadal during his ATP EXHO singles tennis match against Stan Wawrinka on day two of the Giorgio Armani Tennis Classic at the Hurlingham Tennis Club in Brighton, England on Wednesday. [AP/YONHAP] 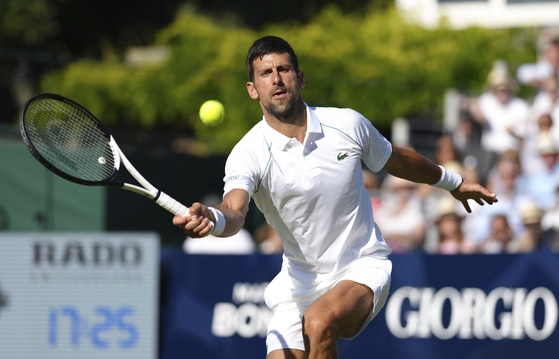 Serbia’s Novak Djokovic during his ATP EXHO singles match against Felix Auger Aliassime on day two of the Giorgio Armani Tennis Classic at the Hurlingham Tennis Club in Brighton, England on Wednesday. [AP/YONHAP]

On Monday, a 15,000-strong crowd will gather on Center Court to celebrate the reopening of Wimbledon.

July 3 will also mark the Center Court Centenary, celebrating 100 years of the iconic venue in its current location on Church Road. The previous location, Worple Road, originally hosted the event for 35 years.

Starting from Roland-Garros last month, all four Grand Slams — the Australian Open, Roland-Garros, Wimbledon and the US Open — have implemented a new rule, jointly agreeing to play a 10-point tie-break when the score reaches six games in the final set.

Twenty-three-time Grand Slam women’s singles winner Serena Williams comes back this year on the Wimbledon grass after missing out on tournaments for a year after injuring her leg in the first round of Wimbledon 2021. The 40-year-old is currently playing the women’s doubles with Tunisian Ons Jabeur at the Eastbourne International, warming up in time for Wimbledon.

King of clay and 22-time Grand Slam winner Rafael Nadal also threw his hat into the ring right after his astonishing 14th Roland-Garros win just last month, even after recently acknowledging a pain in his left foot.

But on the grass court, 20-time Grand Slam winner Novak Djokovic of Serbia may be a stronger contender. Djokovic will be looking to win his fourth consecutive Wimbledon singles title this year, and his eighth in total. Fan favorite Roger Federer of Switzerland will not be competing this time around as he is recovering from knee surgery. Wimbledon takes place from June 27 to July 10.