Built in the 1850s as a summer home for wealthy Philadelphians, this house underwent a two-year rebuild that returned it to its original glory.

Sign up for our weekly home and property newsletter, featuring homes for sale, neighborhood happenings, and more.

This is the back, not the front, of the grand Italianate mansion known as “Stanhame” at 415 Cottage Ave., Edgewater Park, NJ 08010. And if this is what the back of the house looks like, imagine what it looks like in front. Actually, you won’t have to imagine: Read on and you will see. † Photos: Wiebke Martens via Callaway Henderson Sotheby’s International Realty

Cottage Avenue, the street that runs closest to the Delaware River in the Burlington County township of Edgewater Park, looks like many a South Jersey suburban lane. The street has neither curbs nor sidewalks, and the houses that line it are mostly Colonials, Dutch Colonials, Cape Cods and ranchers dating to the middle of the 20th century.

But in the middle of its easternmost block in Edgewater Park, in the middle of all these middle-class houses, one suddenly runs across a stretch of road with curbstones, a manicured lawn, and an iron gate.

Beyond that gate, at the end of a long drive, sits the grandest of the riverside houses that sit behind those more modest ones: “Stanhame.”

Built sometime around 1854, this Italianate Edgewater Park riverside house for sale is the oldest of a string of houses built along the river here in the years before and following the Civil War by Andrew and James Menderson, who gave the community its name and developed it as a place where well-to-do Philadelphians could escape the heat and sickness of the city in the summer.

Stanhame’s first owner was a gentleman named George Taylor. An 1875 brochure promoting Edgewater Park to Philadelphia’s high society referred to Taylor’s summer home and its neighbors as “beautiful country seats surrounded by magnificent grounds and fine enough for the occupancy of princes.”

In the 168 years since Taylor first occupied it, Stanhame has changed hands seven times. Rope manufacturer JM Wall, who acquired it in 1924, turned it from a summer home to a year-round one, installing central heating. The owners who succeeded Wall made several alterations to the house over the years following World War II, turning its servants’ quarters into an accessory apartment, adding two side wings and a greenhouse to the house, and installing an elevator.

The current owner, who purchased Stanhame in 2004, spent two years undoing all of these changes save the addition of the side wings and greenhouse, including removing the elevator, and restoring the house to its original glory, sparing no expense in doing so.

Like its other neighbors set back from Cottage Avenue, Stanhame was sited to face the river, which means that the auto court at the end of the driveway takes you to its back door. But as the photo above should make clear, the formal garden and fountain in front of that auto court make this one of the grandest back doors you will ever see. 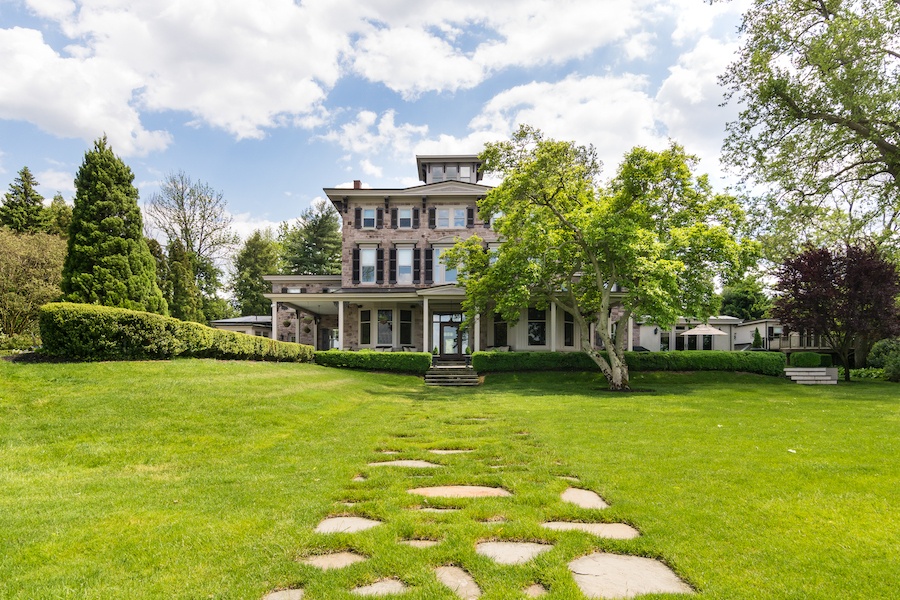 What’s even grander, however, is the river side of the house. 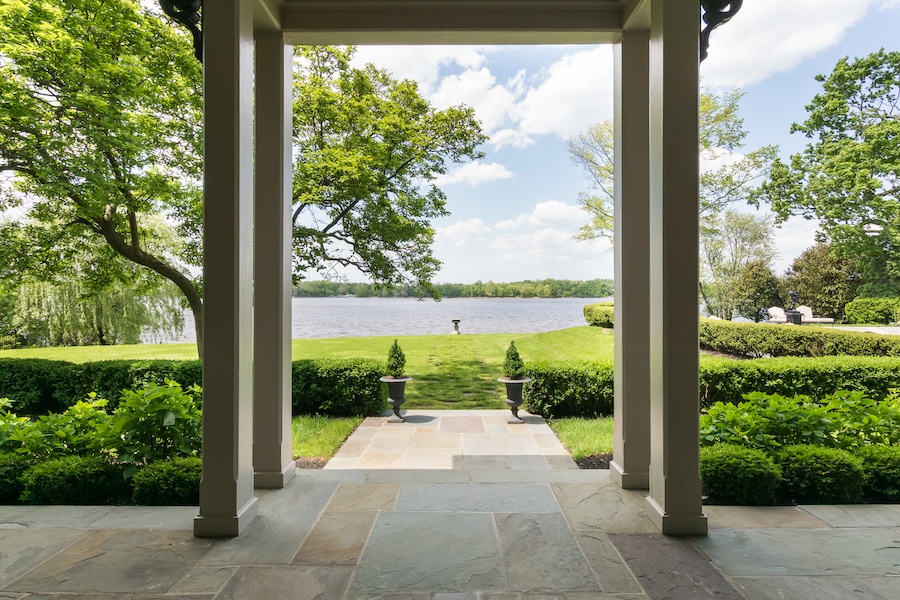 View of river from front door

It has a full-width porch facing the river and a stone path leading to its edge. 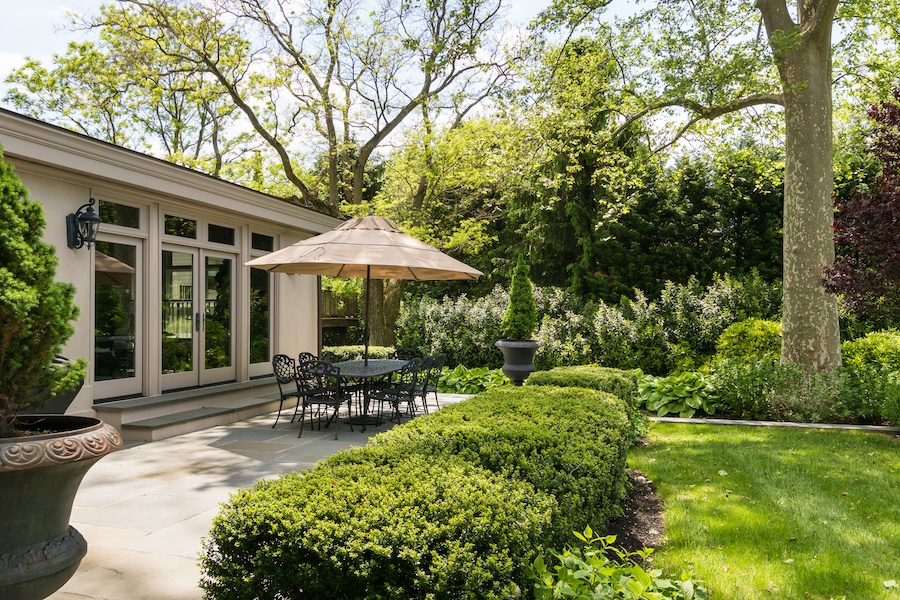 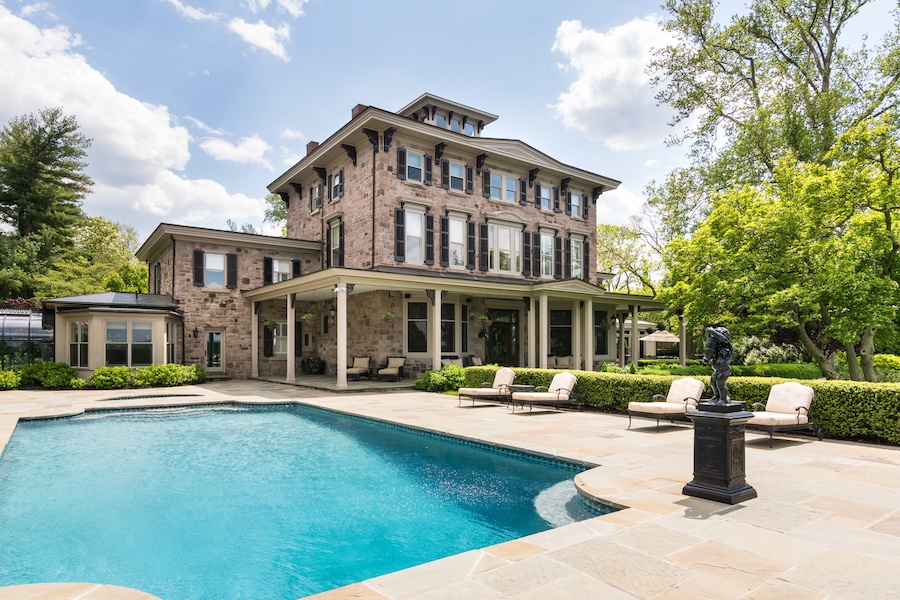 But because this front yard is actually the functional back yard, you will find a patio next to the added wing on one side of the house and a pool and cabana on the other. 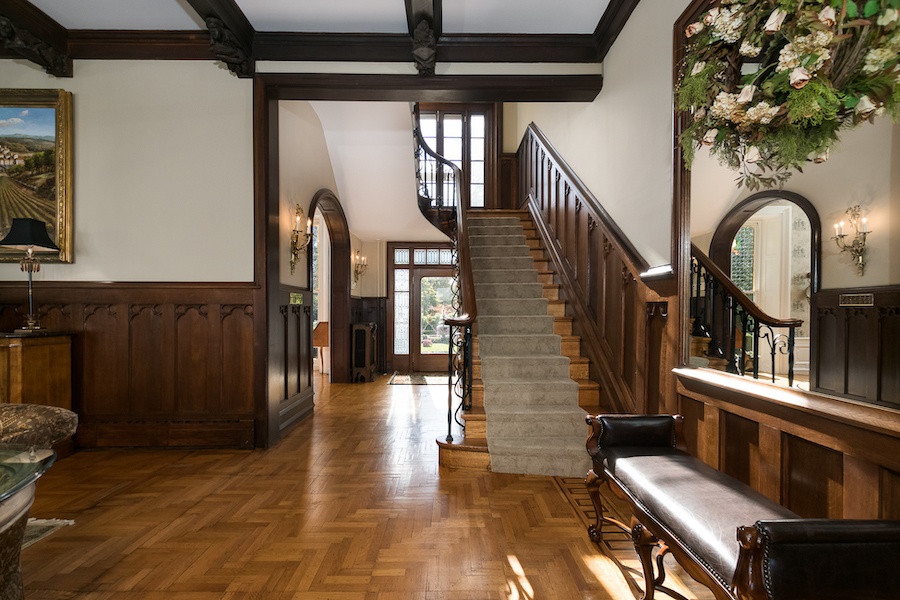 Heading through the back door into the foyer, you soon enter the grand living room, where you also find the front door. 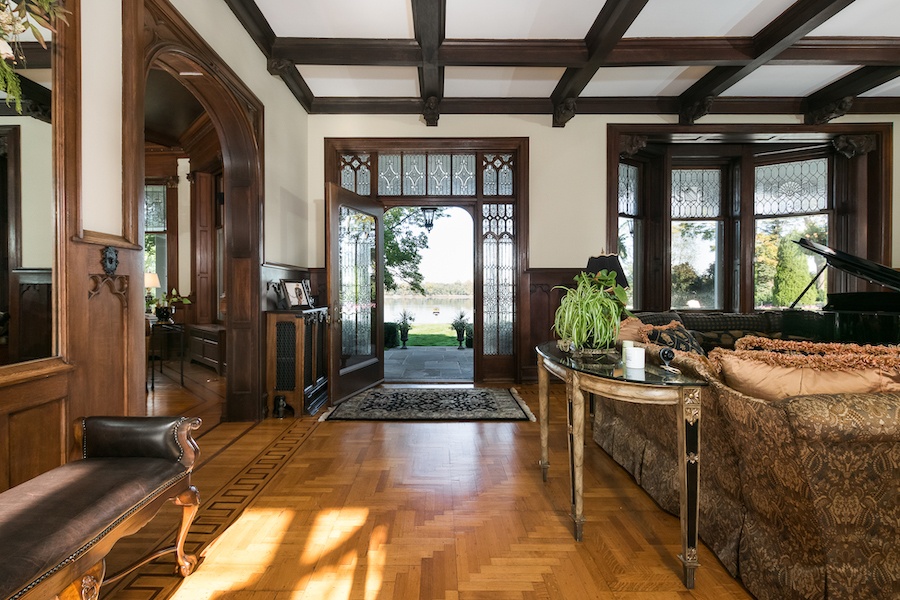 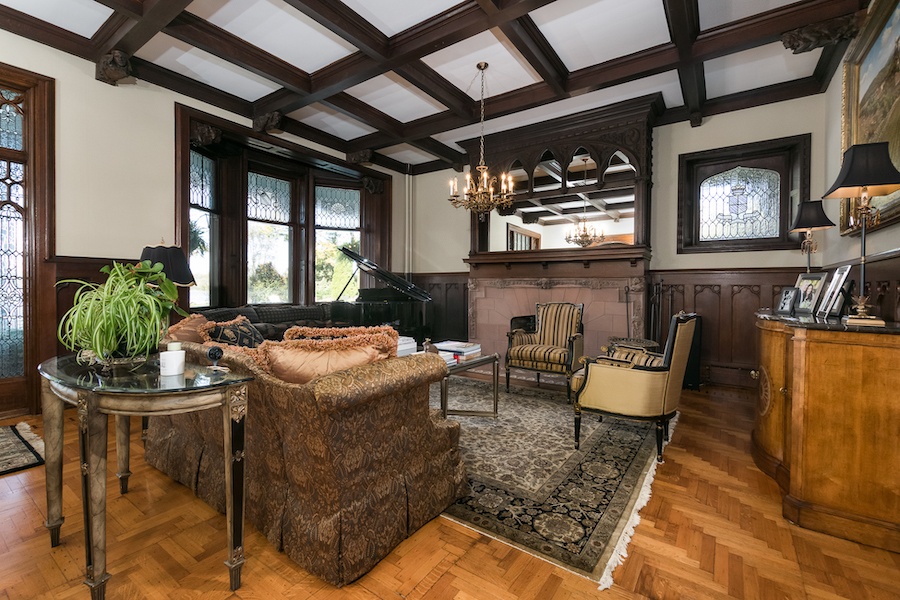 That door and the large windows facing the river feature intricate leaded glass. The beamed ceiling features gargoyles holding up the beams, and the pink stone used in its fireplace was reportedly carved a thousand years ago in Italy and imported here. 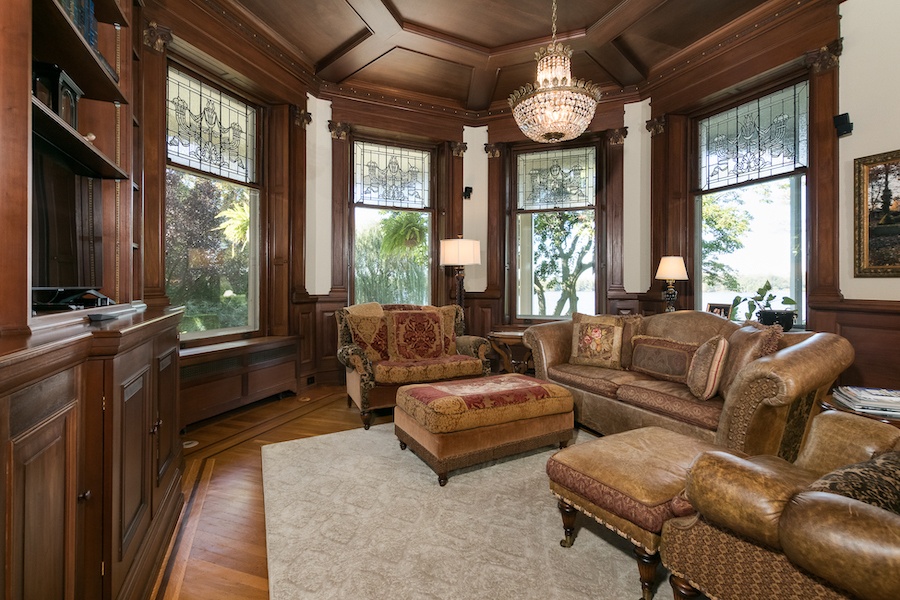 The chestnut paneling in the living room and adjacent side parlor were also imported. 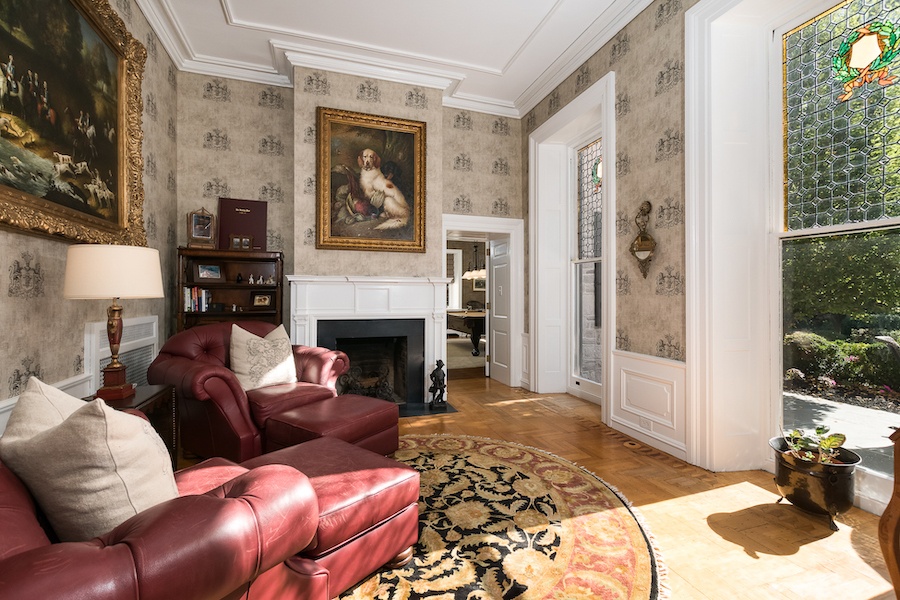 Adjacent to the back door on the right, behind the living room, is this elegant sitting room. 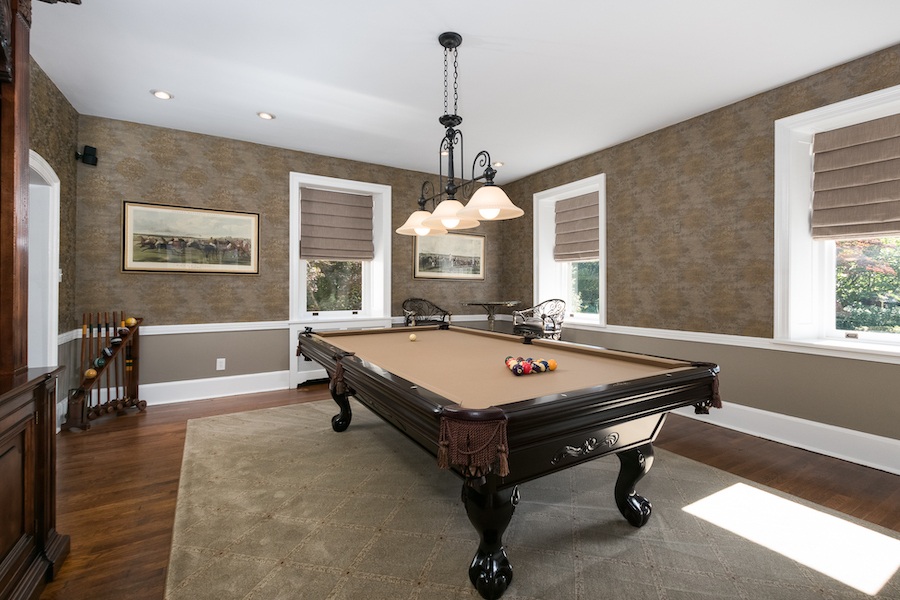 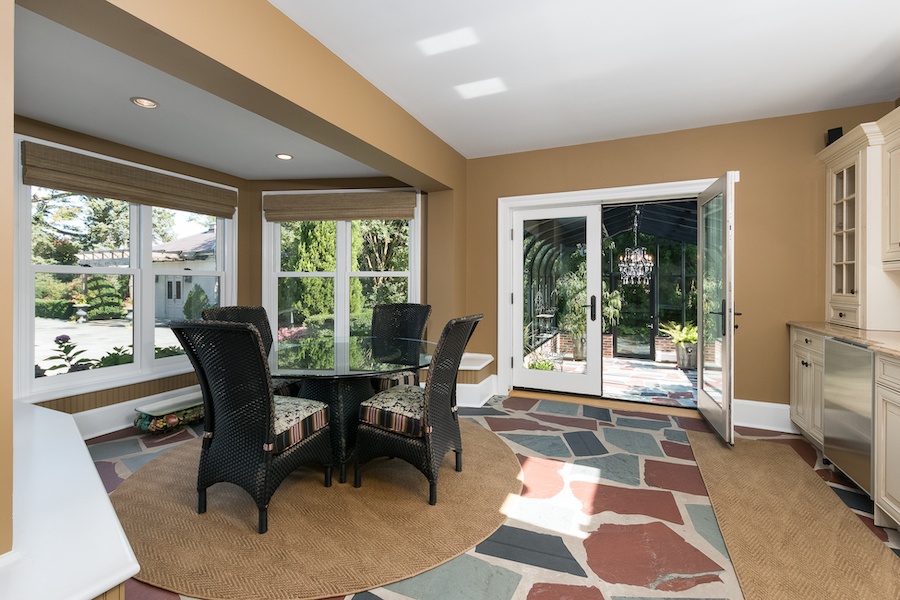 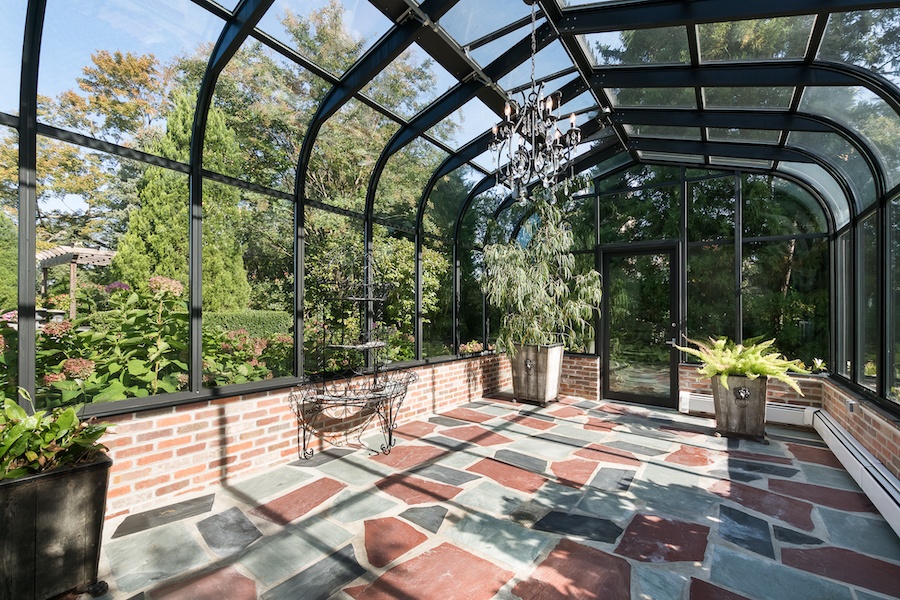 Beyond the living and sitting rooms, you will find a billiard room, a bar room whose bay window faces the pool, and a greenhouse. 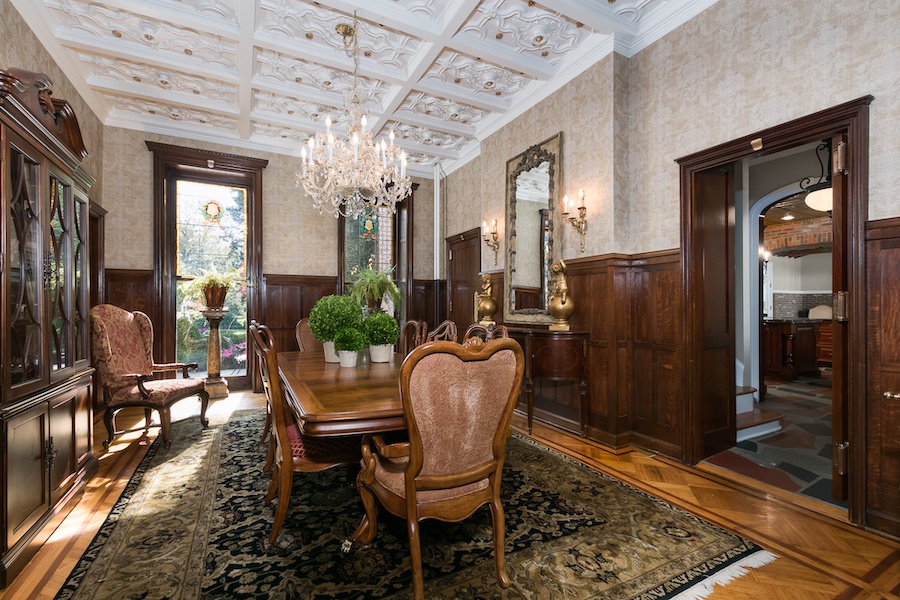 And in back of the side parlor, to the left of the back door, is the formal dining room. It has leaded-glass windows with stained-glass medallions and an elaborate coffee ceiling. 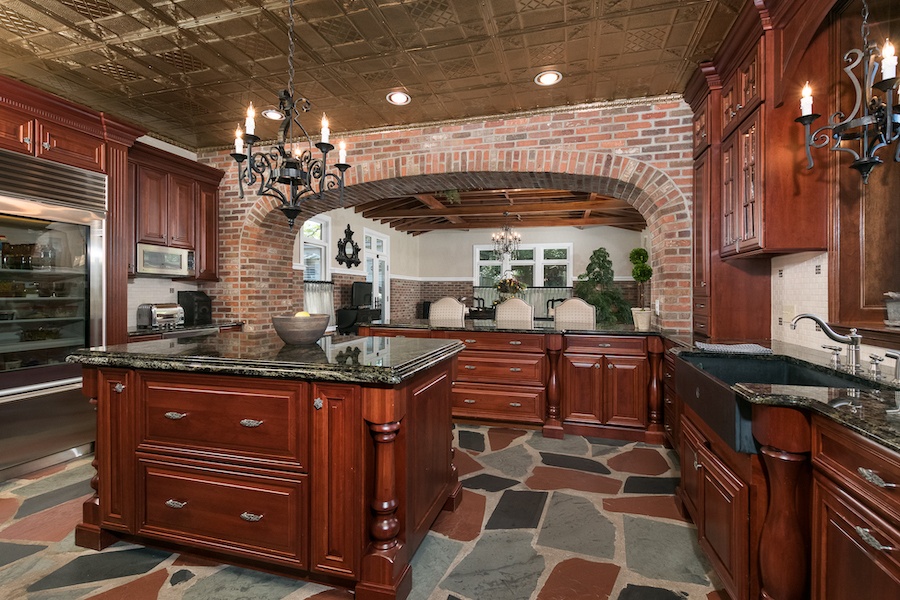 A doorway leads from the dining room past the back stairs to a grand kitchen with a casual dining room next to it. 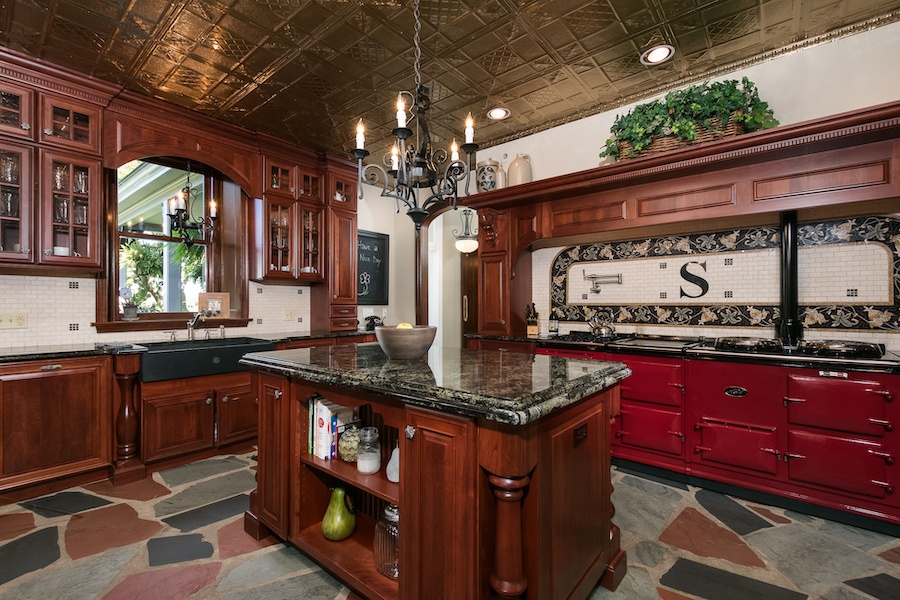 This kitchen was made for someone who loves to give their all when they cook. It features a huge Aga range and a professional-grade Sub-Zero refrigerator-freezer, and it abounds in pantry, storage and granite-topped counter space, all under an authentic pressed-tin ceiling. 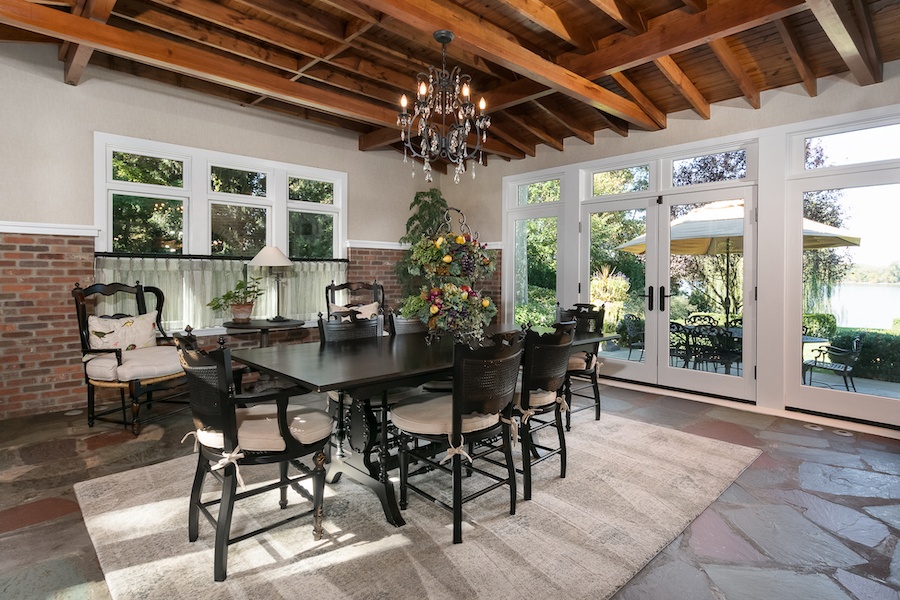 The public spaces in this house, then, are grand indeed, but so are the private ones on the upper two floors. 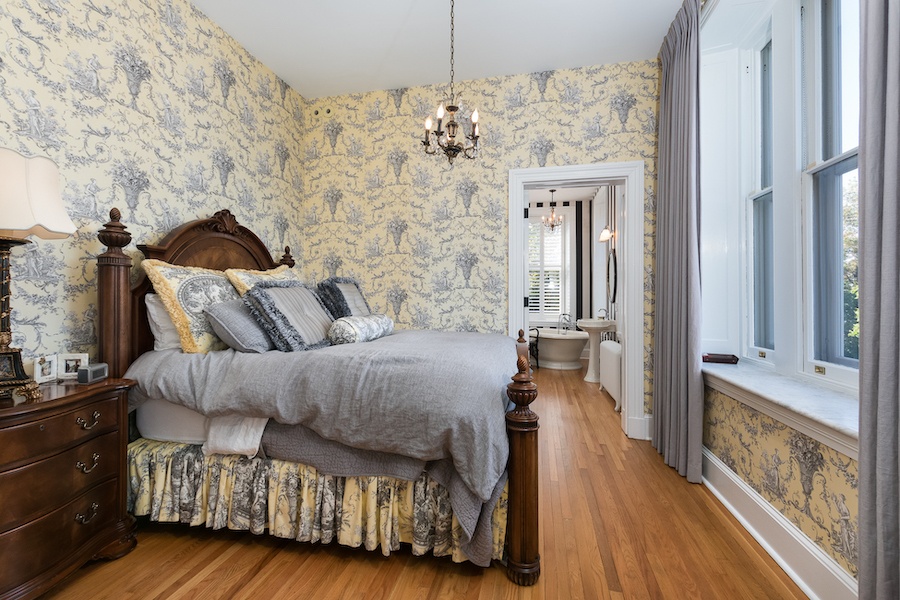 All of this house’s seven bedrooms have been redone in historically appropriate style. Above you see the primary bedroom. 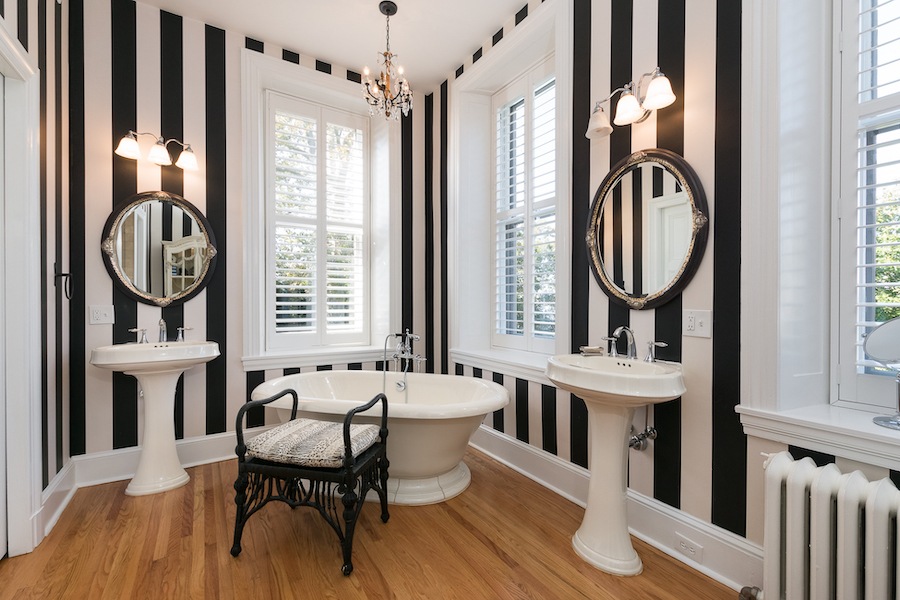 The primary bathroom has a luxurious soaking tub, while every other full bathroom in this Edgewater Park riverside house for sale features a 19th-century-style clawfoot tub. Some of the bathrooms also have stall showers. 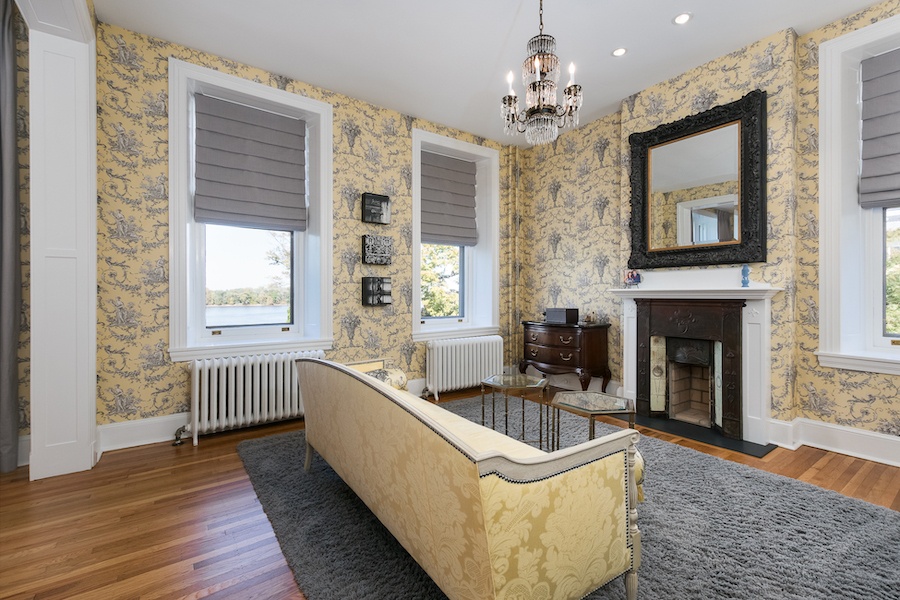 Each of the two upper floors also has a sitting room. The one on the second floor has the same 12-foot-high ceilings as the rooms on the first floor. 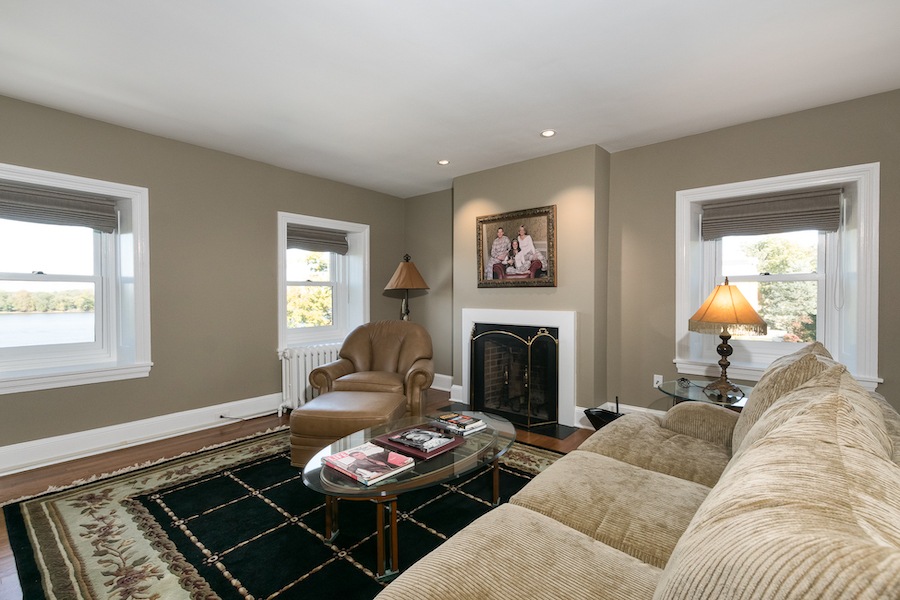 The one on the third floor, as well as the third-floor bedrooms, feel more intimate thanks to their lower ceilings. 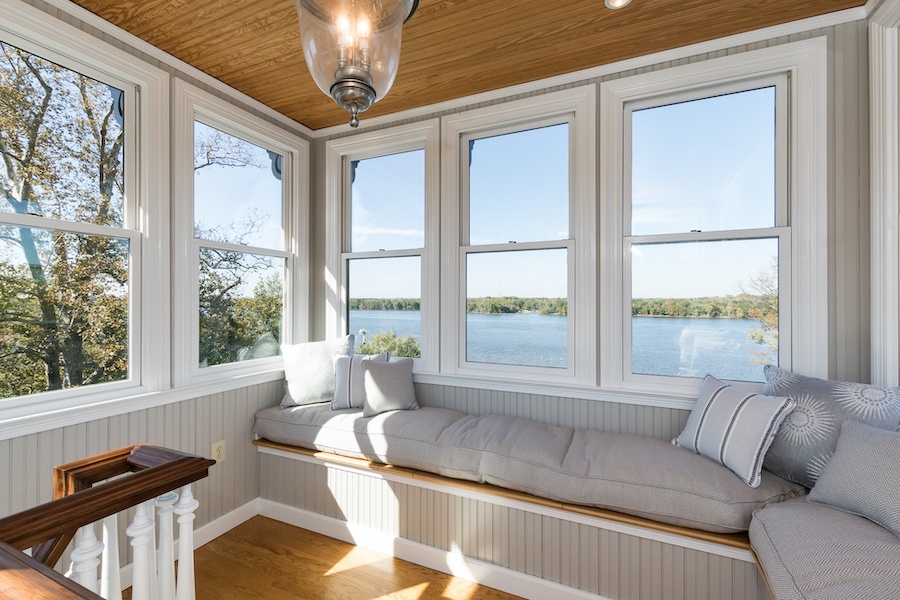 And the grand main staircase ends at the belvedere atop the house. From here you enjoy a 360-degree view of the river, the property, and the community. 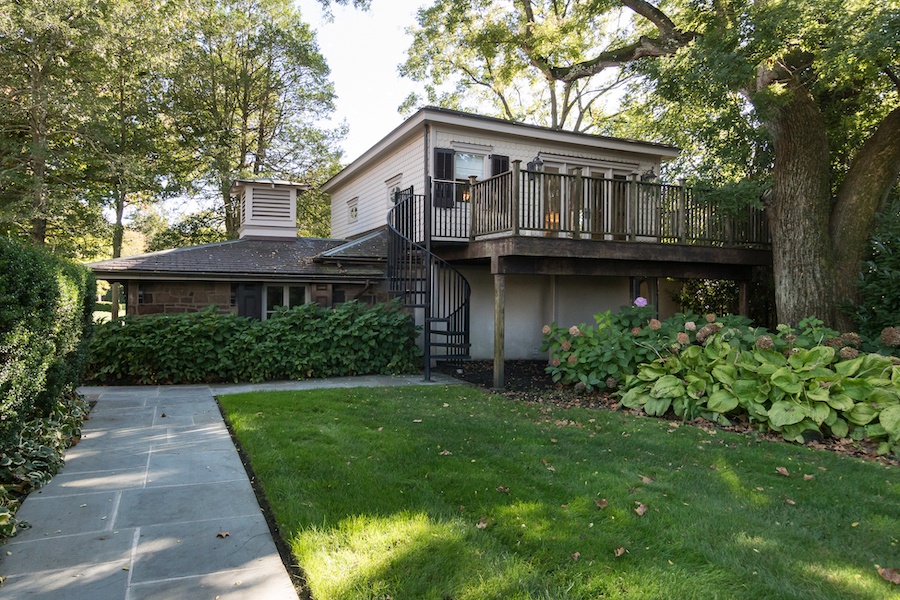 Stanhame’s 5.2 acres include two other buildings. One is a six-car garage with two outdoor spaces next to it. The other is this carriage house, which includes an accessory apartment. 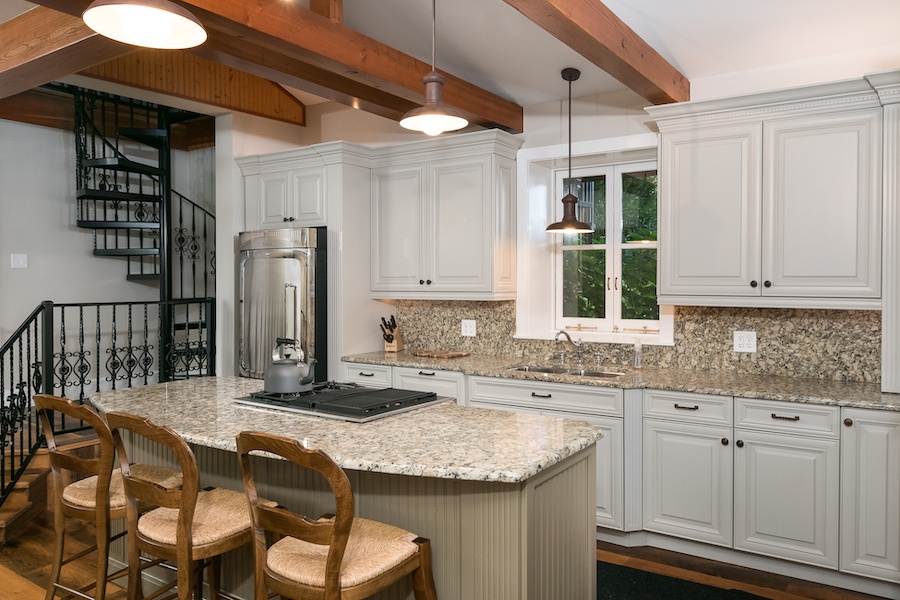 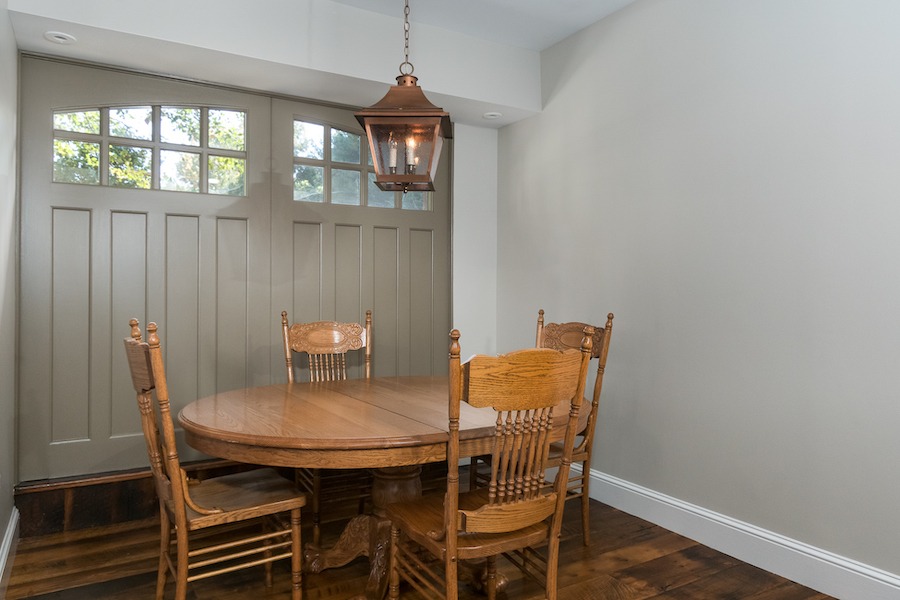 Its main floor contains an up-to-date kitchen and a dining room in one of its three garage bays. You can park cars in the other two. 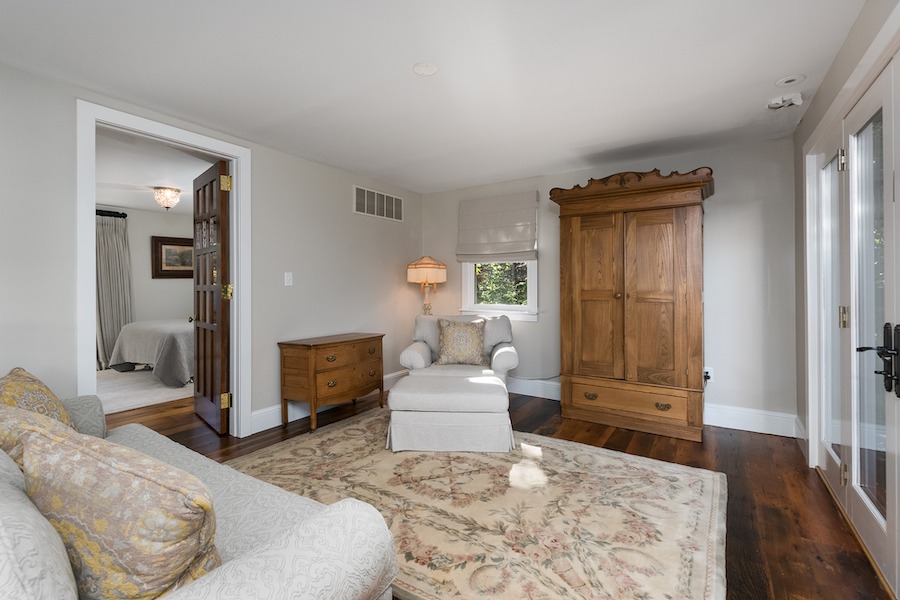 The living room and bedroom make up the second floor. A large balcony with a spiral staircase from the ground sits off the living room. 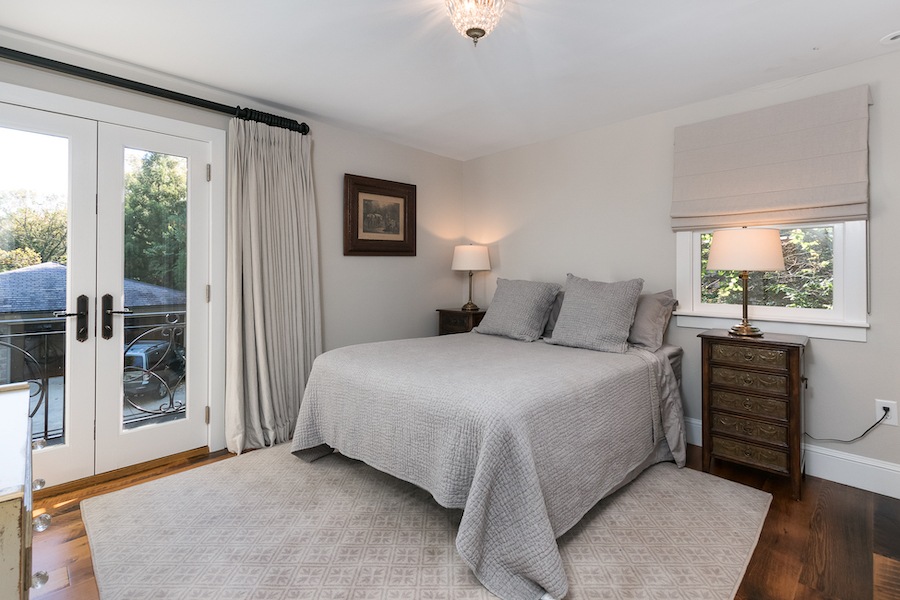 The bedroom has its own smaller balcony over the garage as well as an en-suite bathroom. 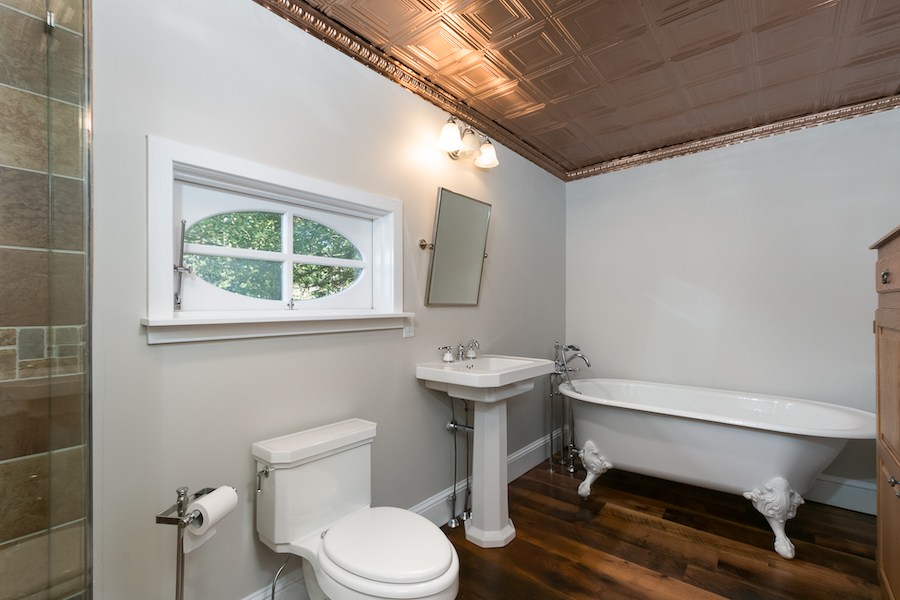 That bathroom has a pressed-tin ceiling and — as might befit a carriage-house bathroom — a more modest clawfoot tub than those in the bathrooms of the main house.

Given how this house is oriented, when you invite your friends to visit, you might want to encourage them to arrive by boat. They should have no problem mooring next to your backyard since this house comes with 1.2 acres of riparian rights. (You will, however, need to put in a dock of some sort if you plan to do this.)

Cottage Avenue, by the way, gets its name because in the beginning, the servants’ cottages were located across it from the mansions they served. Some of those cottages may survive to this day.

Clearly, you will live like a prince if you buy this Edgewater Park riverside house for sale. You will also take possession of the grandest (and priciest) house in the township. But you should find you will still get a warm welcome from your neighbors in this “small town with a big heart.”