Just nine days after becoming only the second cueist after Australia’s Mathew Bolton to achieve a double title (snooker and billiards) in the Pacific International, at Melbourne, India’s Sourav Kotharic shone on the green baize at the National Sports Club of India (NSCI) All India Snooker Open. 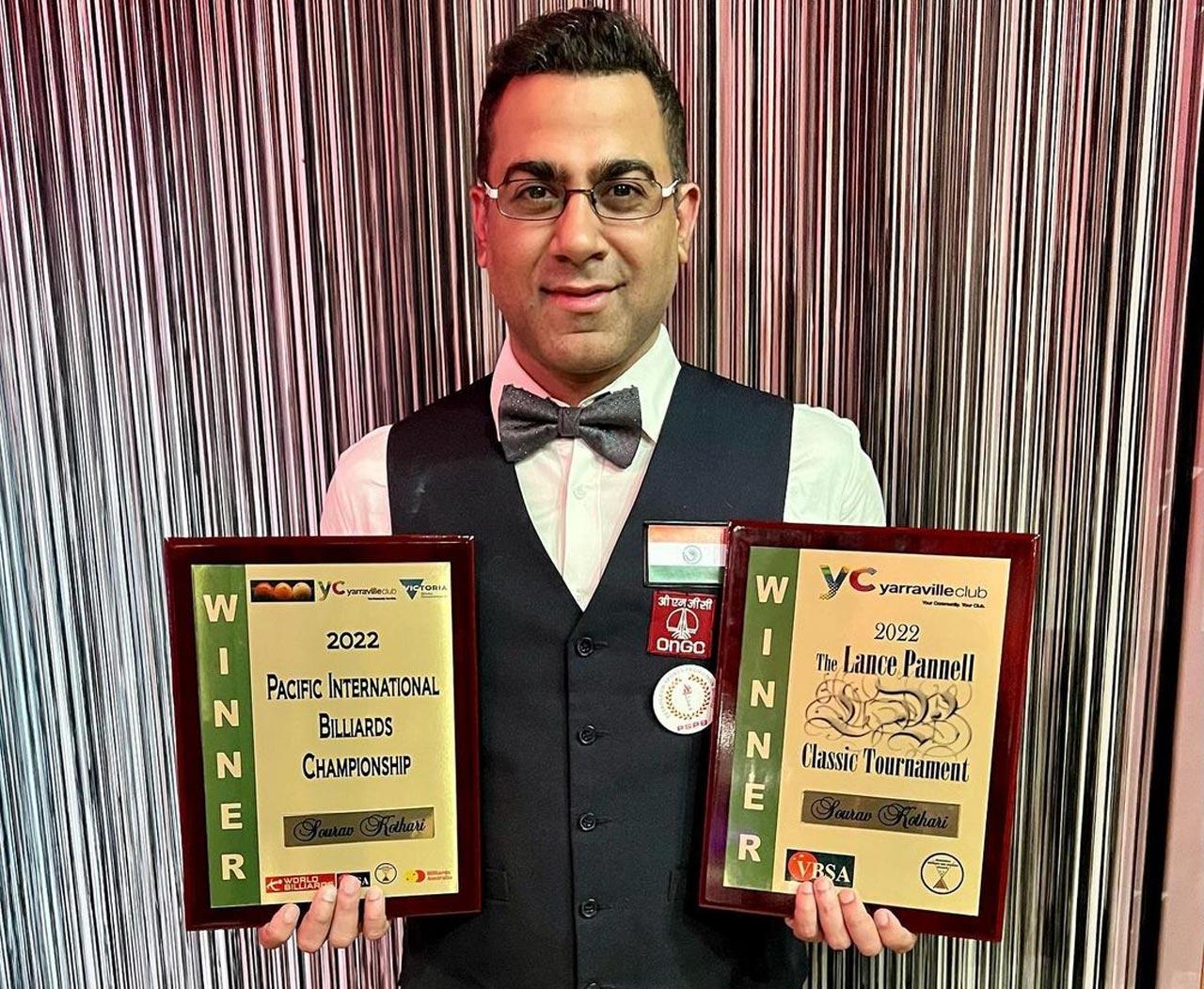 Sourav Kothari with the Billiards and Snooker titles he won at the Pacific International Championship in Melbourne. Pic/Instagram

In the final of the Pacific International Billiards Championship, Kothari, 37, edged past multiple-time English champion and current World No.2 Rob Hall 1500-1321 in the Level 5, World Billiards ranking event, to win the title. When asked which match was the toughest for him in Australia, Kothari referred to the final against Hall. “To become only the second one to accomplish the feat feels fantastic. Sailing in with a 600-point lead in the 1500 match final, I was comfortably positioned to get to the finishing line. Suddenly, Hall, an absolute world-class champion, made that fabulous break of 400 and followed it up with another 100 and then in no time, the entire deficit was covered up and he was in fact leading by 50 points. You can imagine the kind of pressure that one could feel when I had such a big lead and everything got erased. To be able to go through the finish line in spite of that massive surge was truly satisfying. That’s why it was the toughest and perhaps the best victory of the Pacific Billiards for me.”

Also Read: Sania Mirza-Lucie Hradecka ousted in Round One of Wimbledon

Kothari thanked his dad, Manoj, for helping him with his cue action before traveling to Australia. “I was struggling with my game before I went to Australia. I was not happy with my technique and certain things were not falling into place. I was desperately seeking help from my father, who was very kind enough to help me out like he always does. I was able to better my cue action and make it more firmer and steadier as I would have liked it to be. And yes, it just bore fruit beautifully as I managed to win both titles,” said Kothari.

Meanwhile, for the Kolkata-based cueist, the one triumph which remains special to him is the 2018 World Billiards Championship win in Leeds, where he emulated his father Manoj, who won the title in 1990. “When I think about, becoming the world champion [in 2018] 28 years after my dad’s win, gives me goosebumps. For a son to emulate his father, a legendary figure, is quite rare. For me, it was one of the biggest victories of my life. In the final, I beat Peter Gilchrist of Singapore 1134-944. In the semis I was up against David Causier [six-time world and defending champion from England]† Being 500 points down and to beat him with that kind of deficit is one of the highlights of my career,” he explained.