GM Ian Nepomniachtchi, who had already secured his victory with a round to spare, drew his last game with GM Jan-Krzysztof Duda to win the 2022 Candidates Tournament undefeated, with a 2902 performance rating and a record 9.5/14 score. GM Ding Liren won the clash with GM Hikaru Nakamura on Monday to finish in second place.

Nepomniachtchi has qualified for the 2023 World Championship against GM Magnus Carlsen but if the world champion decides to forfeit his title, Ding will play instead.

It was a fitting end to a very exciting Candidates tournament: no fewer than three decisive games in the final round, leading to some dramatic shifts in the standings. The winner, however, was already known.

In the last round of the previous Candidates, when he had already clinched the tournament victory as well, Nepomniachtchi was crushed by Ding. This time, the Russian grandmaster managed to remain undefeated with a record score of 9.5/14 since this format was introduced in 2013. In the previous five tournaments, only GM Viswanathan Anand managed to win without losing a game, incidentally also qualifying for his second match vs. Carlsen.

The fight for second place was decided on the very last day, with Ding winning on demand vs. Nakamura. Qualifying by rating, it took a month full of chess for him in China to get to the minimum amount of games he needed to be eligible. After losing his first-round game to Nepomniachtchi (and missing some chances in the first half), it was quite the achievement for Ding.

Joining the Chess.com broadcast, the Chinese GM confirmed that a jetlag had bothered him at the start, when he slept badly. He was hoping for a quick draw in that first round, but that didn’t work out. “After that I tried to take it as a normal tournament and not the Candidates, to not put so much pressure on myself.”

Ding, by the way, believes that in the end, Carlsen will still defend his title next year. That might have become more likely after the world champion met with FIDE’s President Arkady Dvorkovich and Director-General Emil Sutovsky on Sunday. The three discussed potential changes to the match format, and Carlsen was kindly asked to make up his mind not later than July 20, International Chess Day. To be continued.

Duda should be praised for playing a game today, where he had every reason to finish a disappointing tournament with a quick draw, just to get it over with. His opponent certainly wouldn’t have objected.

Instead, the Polish player, who had lost his game with Nepomniachtchi in round six, showed some impressive preparation against the Petroff. He got his opponent thinking by move 11, while he kept on blitzing for four more moves. Only after 15…a5, Duda took his first big think.

Nepomniachtchi said he had analyzed the line, but didn’t expect it for today and so he had to work hard to remember his preparation. As the middlegame became sharper and sharper, he kept finding all the good moves though. The tournament winner showed amazing defense once again, like he had been doing all tournament long.

Duda’s 26.Bxg6!? was a nice shot to open up Black’s king, but Nepomniachtchi’s 28…Bd5!, similar to Nakamura’s 25.Bd6 in the previous round, saved the day. A “correct” and interesting draw!

The big game of the round started quietly, but didn’t disappoint. Nerves and tiredness were affecting both players, but in the end, Ding deservedly prevailed in a must-win game to secure second place.

The players had drawn an interesting game in round six and there was more history: arguably the best Chess.com Speed ​​Chess match ever was played between these players, in December last year.

In today’s game, Nakamura initially did quite well. His invitation to enter a Semi-Tarrasch was declined by Ding, but then it became a Queen’s Gambit Accepted with a very symmetrical position. Nakamura’s 14…f5!? changed that a bit, but it demonstrated that Black was absolutely fine.

However, the American GM regretted not trading rooks on move 18 (followed by putting his other rook on d8), because with the subtle 19.Rdc1! Thing managed to keep the rooks, and therefore some play in the position. “It should still be fine but already I was very upset with myself,” said Nakamura.

Visually, Ding seemed to be making some progress as he got his rook to the seventh rank, but there was still enough counterplay for Nakamura if he had offered a rook trade on move 35.

Here, 35…Rd8 36.Rxd8 Bxd6 37.Bd6 looked unpleasant for Black but it holds if Black follows up with 37…Kf7! 38.Nc5 Be7! and in the knight endgame, White winning the pawn on a6 is not a problem with Black’s king being so active and White’s h-pawn dropping soon.

Instead, Nakamura went with 35…Bd8? after which White was in full control. GM Daniel Naroditsky said that the only aspect that was not perfect for Nakamura in this tournament was “that he has misevaluated positions at critical moments.”

Nakamura himself used the word “tilt” in his interview afterward. “I couldn’t control myself. I was just not very happy with what was happening throughout the game.”

Ding, however, gave his opponent one more chance. With a better mindset, Nakamura might have found 38…f3! but when he didn’t, that was it.

“Luck goes around, comes around,” said Nakamura, who admitted that he had been a bit lucky the day before. “Today… it’s insane.”

The final round of the Candidates tournament saw a very critical fight for second place between Ding and Nakamura. Thing needed a win with White to overtake Hikaru in the standings. It’s always painful to see Nakamura lose an important game, but I really have to give Ding props for finding ways to apply pressure in what looked like a totally dead position.

“A good game of tired people,” was how Radjabov described his win of today, his third in the tournament that got him to third place in the final standings. He might have been tired as well, but in the game it was mostly Rapport who ran out of steam.

This encounter was one of two games that saw an identical start, and one that we’ve seen before in this tournament: the Ruy Lopez, Anti-Berlin variation with 6.Nbd2. The same occurred in Caruana-Firouzja (see below).

Both players executed a fair amount of standard moves with White bringing his knight to c4 (by detour!) and Black supporting his base on e5 with 14…Nd7 and 16…f6.

Rapport’s 17.Rg1 was a sign of things to come: he was ready to launch his g-pawn up the board and go for the opponent’s king. With 18…h6 Radjabov thought he had stopped that g-pawn for the moment, but Rapport thought differently: push em baby!

19.g5 was a very cool move, similar to GM Wei Yi’s attack vs. GM David Navara in Wijk aan Zee 2016. The follow-up seemed automatic (20.h4) but Rapport had something else in mind: a full piece sacrifice. Objectively speaking it was an incorrect decision, but tough to meet in practice.

Naroditsky quickly pointed out that the intermediate trade 20…Bxc4! 21.bxc4 and only then 21…hxg5 would have been rather close to a refutation, the main point being that Black would be able to follow-up (after 22.Rxg5) with 22…Be7! and 23…Bf6. In the game, that maneuver would have allowed a rook sacrifice on g7 with crazy complications.

Radjabov didn’t like giving up his light-squared bishop, after which the engine agreed with White’s compensation and all three results were possible.

Rapport, however, quickly chose the wrong plan and Radjabov basically killed the attack completely with his rook lift to g6. A few more accurate moves netted him the full point.

Radjabov’s plus score was unexpected, but as it turned out, he wasn’t the punching bag many thought he would be. Instead, the oldest player in the field showed that he could still throw some punches himself, ruining other people’s tournaments along the way.

Rapport, on his turn, unexpectedly finished in last place on tiebreaks. His enterprising play was definitely of great added value in this tournament, or any tournament he plays, for that matter.

After scoring 5/7 in the first half, Caruana somehow completely collapsed. With 1.5/7 he had the worst second half of all players. Firouzja, who was in last place after seven rounds with 2.5 points, scored a decent 50 percent in the second half. He did some damage control today, but still loses 15 Elo points (Caruana dropped eight).

Also in this game, the Ruy Lopez, Anti-Berlin variation with 6.Nbd2 was played. By move 19, a lot of similar moves had followed and Caruana was ready to copy Rapport’s plan of pushing g2-g4, so perhaps that inspired Firouzja to play 19…f5.

This gave Caruana the chance to make some useful trades and White ended up with a beautiful, blockading knight on e4 that could never be touched by a pawn or Black’s bishop. A position Caruana could never lose?

His next two pawn moves (26.g3, 27.d4) seemed wrong, and suddenly Firouzja got significant counterplay. Things got out of hand for Caruana, who ended up a pawn down in an endgame. He somehow fought his way back to a position the engine called a draw, but with his last move to make the second time control, Caruana stumbled after all. 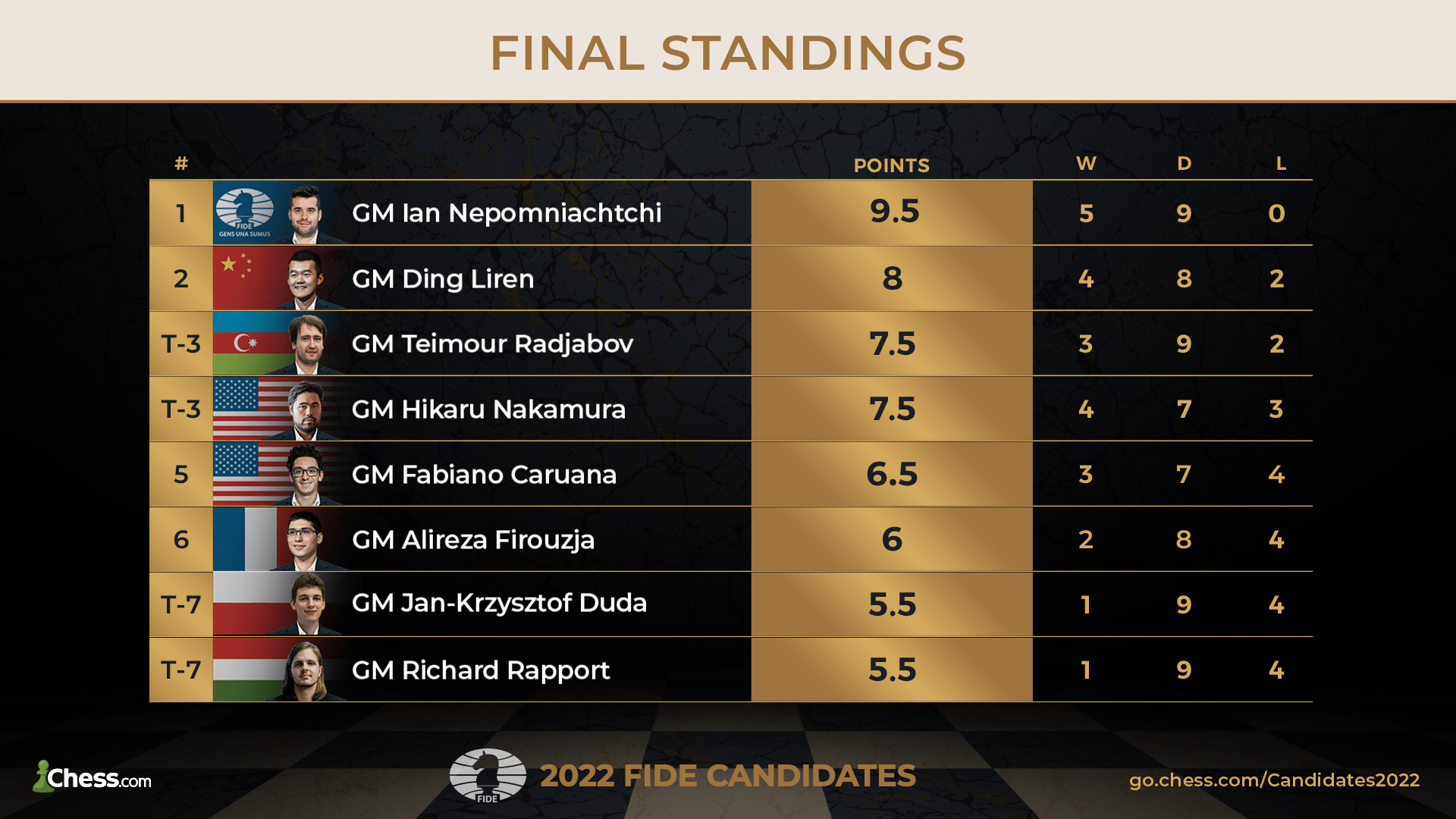