The IX IBCA World Team Chess Championship for the Blind and Visually Impaired takes place in Ohrid, North Macedonia, from June 27 to July 08, 2022. The competition follows the “trademark” IBCA format that combines round robin and double knockout, similar to some high-level football tournaments. According to the results of the 2021 IBCA Olympiad, the sixteen strongest teams are seeded into two groups of eight teams each to play seven-round round-robins. Then, the semifinal and final brackets are built based on these group standings. (The complete Regulations can be found on the FIDE Calendar page). Players use specialized Braille chess boards, talking clocks, and voice recording equipment.

The COVID-19 pandemic dramatically affected many areas of life, including chess. Tournaments were canceled or postponed; other ones were held in the online format. It is great to return to joyful face-to-face meetings after the pandemic. The IX IBCA World Team Chess Championship for the Blind and Visually Impaired is organized by the National Sports Federation of the Blind of North Macedonia in cooperation with the Chess Federation of the North Macedonia, Chief Organizer Gjorgji Minovski (MKD). Its venue, the Metropol Luxury Resort Ohrid, is a familiar and pleasant location for many players from Europe and all over the world who attended prestigious ECU and FIDE events there in the past. This championship is a joint effort of IBCA, local organizers, Macedonian regional and municipal authorities that made sure players can meet in person while ensuring all the extra accessibility measures.

President of the Republic of North Macedonia, Mr Stevo Pendarovskic sent his warm greetings to the participants. 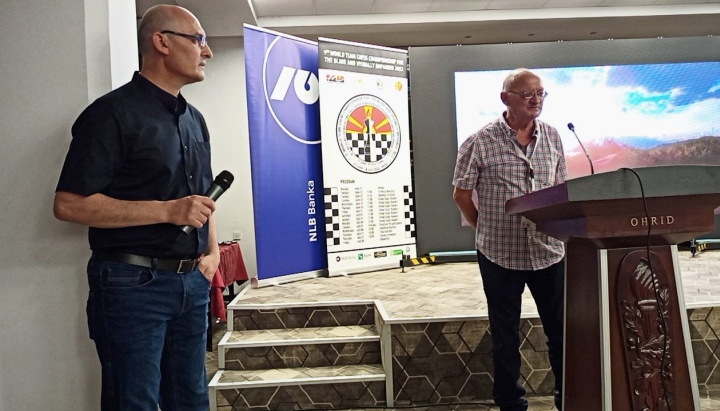 The ceremony started with an emotional live rendition of the national anthem by prominent local singers. Then, Mayor Naum Jamandiev welcomed the participants to the Ohrid municipality and reminded them that Ohrid has a unique distinction of being one of only 28 locations in the world that are classified by UNESCO simultaneously as a Cultural World Heritage Site and the Natural World Heritage Site. He emphasized excellent collaboration between the IBCA, the organizers and local authorities, making it possible for over one hundred participants to meet in Ohrid in person and enjoy chess.

Before declaring the Championship open, the IBCA President, Dr Charudatta Jadhav, touched on the important themes of cohesiveness and solidarity of the global Braille community. He asked for a minute of silence in memory of Dr Ludwig Beutelhoff, the longest-serving past IBCA President (2005-2017), who passed away at the age of 74. As philosopher and promoter of Braille chess, publisher of Marburger Schachzeitung, and disability officer of the Deutscher Schachbund, Dr Beutelhoff enjoyed universal respect and admiration both the Braille fraternity and among the global chess community. 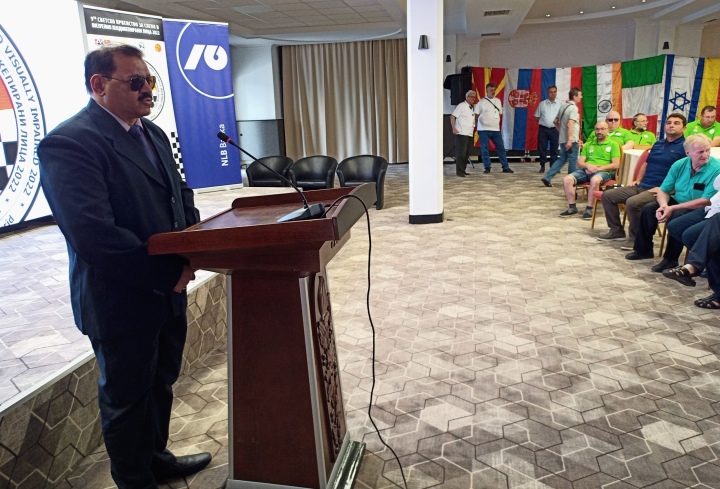 His spirit and his ideas continue to inspire the next generations of Braille players. President Jadhav warmly welcomed players from war-torn Ukraine who faced numerous obstacles to their participation but overcame them all with the help of the worldwide Braille chess family that organized a successful fundraising effort and ensured players’ safe passage. National Braille associations of Sweden, Germany, Canada, North Macedonia, France, Italy, as well as the IBCA itself, generously contributed enough money to enable the participation of Team Ukraine in the Championship in Ohrid and Ukraine’s best female Braille player, Liubov Zsiltzova- Lisenko in the upcoming IBCA World Women’s Championship in France. It is a great example of solidarity that transcends borders! The IBCA President’s speech was frequently interrupted by applause from the audience.

mr Blagoj MishevskicPresident, National Sports Federation of the Blind of North Macedonia, and Mr Zarko SelkovskyPresident, Braille Chess Association of North Macedonia, stressed the efforts that the government and local authorities in North Macedonia take to ensure integration and full participation of disabled people into broader society, and remarked on Braille chess as an excellent way to reach these goals.

Chief Arbiter Vadim Tsypin (CAN) guided the dignitaries to make the first symbolic moves in matches for each of the two groups, Romania – France and India – North Macedonia.

The participants of the Championship are competing for the titles, medals and board prizes. There is a rest day between the end of group stage play and the semifinals when the organizers kindly offer a free excursion to some of the world’s oldest monasteries.

The International Braille Chess Association (IBCA) is the supreme body responsible for chess for the blind and visually impaired. The IBCA is part of the International Blind Sports Federation and an Affiliated Member of FIDE. Founded in 1958, the IBCA has grown to more than sixty countries on four continents. Its major competitions include the Blind Chess Olympiad and the Blind World Chess Championships.