SOAP LAKE — The City of Soap Lake was bustling with Fourth of July fun over the weekend.

“Growing up here and stuff, you know it’s good to see Soap Lake do something; and the response we got,” said Dewey Spurbeck.

The weekend full of events kicked off on Saturday with the Soap Box time trials before the races Sunday morning.

The Soap Box Derby saw twelve participants travel down the hill on Main Avenue East. Each car was as unique as the child that rode in it. car no. 911 was white with ‘Soap Lake Police’ written on the side and even had a flashing red and blue light.

The winner of the derby was 8-year-old Langstyn Rhoads. She rode in a purple car, No. 072, with the logo of JT Motorsports.

Rhoads was in it for family tradition and a good time, she said.

“Because it was going to be really fun and I really haven’t done it, this is my first time,” Rhoads said.

It was also a family affair, many of Rhoads’s family members have participated or volunteered with the derby in the past, even going back to the very first derby held in Soap Lake.

Rhoads also eagerly said she wants to do it again next year and that her favorite part was racing.

The Derby this year was brought back and put on by Soap Lake Police Department along with volunteers and sponsors. SLPD Chief Ryan Cox, who headed up the endeavor and personally worked on each car to get it ready for the big day, said he was doing it for the children in the community.

Later that afternoon, the Seattle Cossacks performed acrobatics on motorcycles, drawing a crowd and warming them up for the parade. The parade came right after and saw vintage and muscle cars, candidates for various political races going on this year and Mrs. America Royalty, Grant County Fire District No. 7 and the Cossacks even came back for round two at the end of the parade, partly due to the rain that downpoured during their initial performance.

The stunt group had two SLPD officers lay on the ground with a couple of their own members as one drove their motorcycle over the top of them.

Many people could be heard saying not only how great the parade was, but that it was the best one Soap Lake has held in years.

Both Gene Bradham and Spurbeck agreed that they thought the whole parade was great and were excited to see it continue in the years to come.

Attendees of the parade then flocked to East Beach Park where food, drink and music were abundant. There was also face painting and a couple of bounce houses during the day for children. Fireworks closed the day at 10 pm

“It was such a great turnout,” said former Soap Lake Mayor Raymond Gravelle. He said his favorite part of the festivities was the Cossacks.

Rebecca Pettingill may be reached at rpettingill@columbiabasinherald.com. 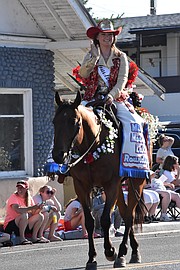