Playing quarterback in the NFL isn’t rocket science. Or is it?

Wednesday evening, Josh Dobbs landed in Jacksonville with his teammates ahead of the Browns’ preseason opener Friday night and the unofficial start of his sixth NFL season.

Dobbs has worked in Florida before, both as a quarterback with the Jaguars and as an aerospace engineer with NASA in two separate offseasons. These are the paths Dobbs, 27, has followed since he first took up quarterbacking at age 6 and first visited NASA with his family at age 7 while en route to a vacation at Universal Studios.

A lot of guys have been the first thing Dobbs listed, mostly in short stints. Dobbs, however, is positioned to become the first to be both as he signed a one-year deal in April and has spent the entire offseason preparing behind Deshaun Watson and Jacoby Brissett. The Browns completely remade their quarterback room in the offseason, so adding a rocket scientist — like, a real rocket scientist — to the group was done at least partly to help the overall learning process.

“I knew Josh a little bit before we got here,” Brissett said. “He’s a fascinating guy. So (smart). Every time he gets a question right (in a meeting), I go, ‘Of course you got it right. You’re off— astronaut.’ That’s what I always tell him.

“Our (quarterback) room is good. We bring out the best in each other. It’s a good, healthy learning environment. The coaches challenge us, and we challenge each other.”

Then there’s the other part, which from the outside seems comparable to the wild F-16 ride Dobbs took with the Air Force Thunderbirds back in 2019. Watson was handed a six-game suspension on Aug. 1 for violations of the NFL’s personal conduct policy (the quarterback was accused by at least two dozen women of sexual assault and sexual misconduct), but the NFL is appealing and is seeking an indefinite suspension of at least a full season. That’s why the Browns were attracted to Dobbs’ experience back in the spring: He, like Brissett, has been in multiple offensive systems and has been called on to play with little to no notice.

When the Browns departed for Jacksonville on Wednesday, they did so intending to start Watson in Friday night’s preseason opener. Of course, the NFL could announce the ruling on the appeal sometime before Friday evening, so we’ll see what happens.

Dobbs mostly participated in practice drills through the spring but has seen a slight increase in competitive reps over the last nine practices, and his comfort level has increased. We don’t know how the Browns will handle the quarterback room if Watson is handed a lengthier suspension, but the plan since April has been to have Dobbs ready to back up Brissett in case of a Watson absence.

“I have really enjoyed how Josh has handled himself and how he has done in the meeting room,” head coach Kevin Stefanski said. “I think he’s on top of everything. He has had some really good moments out there on the practice field. You always have moments that you wish you could have back, like any quarterback, but I think he is doing a nice job.”

Dobbs was an aerospace engineering major at the University of Tennessee, where he was a part-time starter in his first two years and a decorated player in his final two before the Steelers drafted him in the fourth round in 2017. During two offseason externships at NASA, Dobbs worked on futuristic moon rovers and was part of the launch of an international space station. He plans to “eventually” pursue a career in aerospace engineering, but he’s firmly focused on football for now.

“At this point of my journey, I think it’s great to have interest and the opportunity to play in the National Football League and then also have interest in aerospace and aviation,” Dobbs said. “So getting a chance to take advantage of opportunities in NASA in the offseason has been great … and at some point down the road, I’ll be excited to be in the aerospace world.

“Right now, I like coming to work every day with the Browns. I knew Deshaun and Jacoby a little bit (before the spring) just through the quarterback circle, and that’s a circle I enjoy being in. In this league, in this sports world, you don’t take any opportunity for granted.” 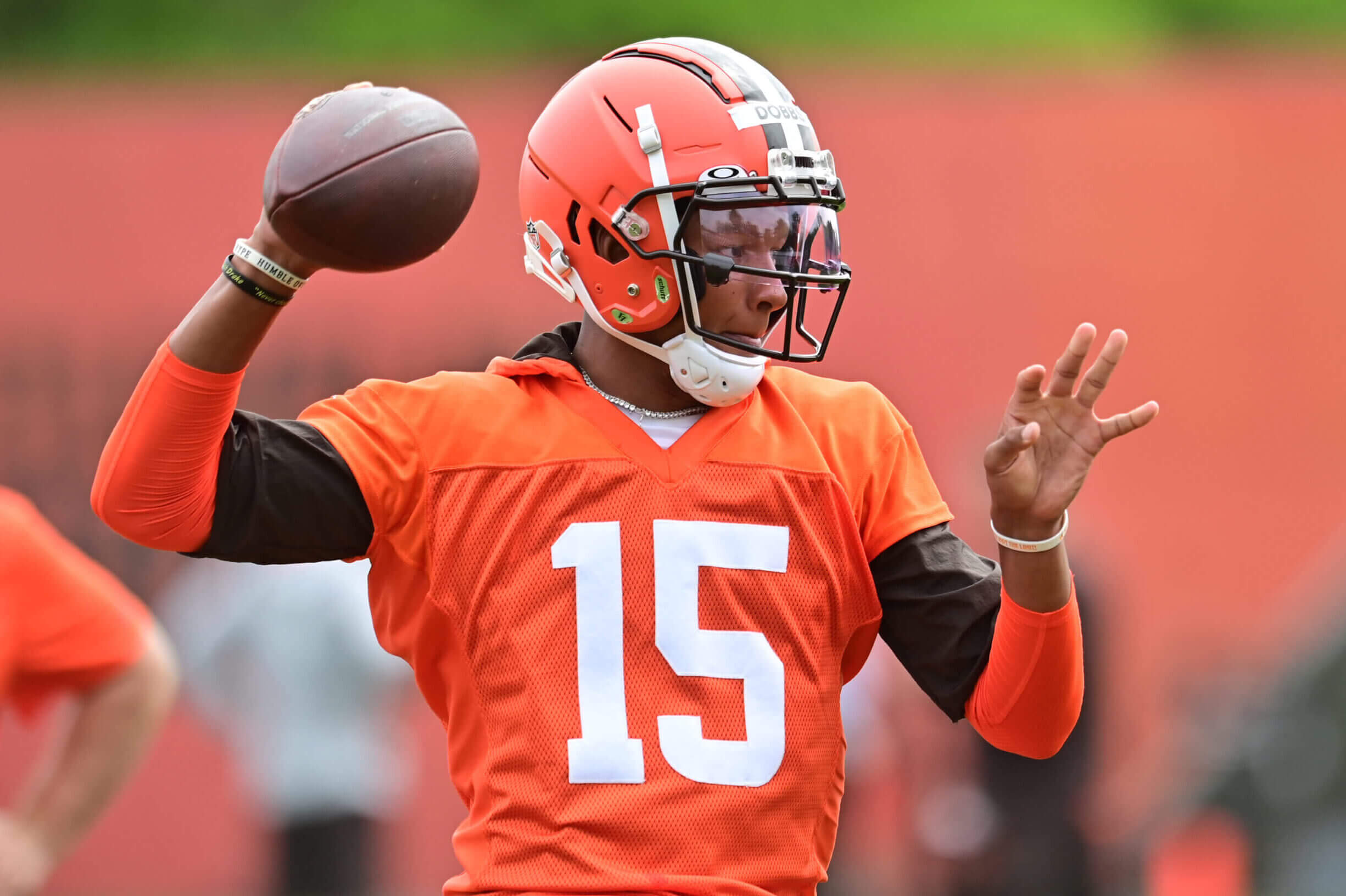 In 2019, the Steelers traded Dobbs to the Jaguars the day after the season opener because Jacksonville lost starter Nick Foles to injury in its opener. Dobbs immediately became the backup to then-rookie Gardner Minshew.

“The biggest learning jump I was able to take was then,” Dobbs said. “To get traded during the season, I was trying to process the emotions of all that, and then I’d been off the plane (in Jacksonville) all of about three minutes when it hit me like, ‘OK, you have five days to learn a new offense.’ That really showed me the most efficient way to learn a playbook — not just memorizing concepts but actually to visualize them and walk through what you’re supposed to see.

“I’ve loved my football journey. Every year is really a lifetime of its own in the NFL, and I’ve had tremendous opportunities to meet people and compete. It’s the ultimate competitor’s game and it requires every ounce of focus and work you can give it when you’re a quarterback. So I’m giving my all every day right now to help this team.”

Through their spring work and the first two weeks of training camp, the Browns have mostly been in the installation stage with their offense. They just recently jogged through their first two-minute situation in practice, and Friday night, they’ll get their first live work of the year. Maybe Dobbs will get a quarter’s worth of work, and maybe he’ll get much more. The team trusts that Dobbs will be ready in either case.

“How smart is Josh? Well, he’s far smarter than I am,” Browns quarterbacks coach Drew Petzing said. “He’s been great. He’s worked extremely hard. He’s a very bright guy who picks things up very quickly, and that translates to the field.