When the Channel 4 cameras turned up to film Ian Watson at Huddersfield Giants training this week, the 45-year old did his best to hide.

“I hate the spotlight. I’ve always been told to get your head down and work hard so that is my way of dealing with things,” he says. “I don’t even watch the media. I’m here to work for the players and not anybody else. I’m not really interested in what other people have got to say.”

Watson is a man in demand, not least this week as his revitalized Giants go toe-to-toe with his hometown club Salford Red Devils on free-to-air television.

Under Watson the Red Devils were shock Grand Finalists in 2019 and Challenge Cup finalists the following year before the ambitious head coach moved across the hills.

“Huddersfield has the resources and an owner who will back the head coach to be successful and a CEO who works overtime to get you what you need,” he explains of his move to West Yorkshire. “Coming here I felt we could turn the tide. And rather than it being just St Helens and Wigan, Huddersfield could get up there as well.

“United, City, and Liverpool are at the top end of the Premier League table all the time but you want different teams to come up and compete to win things as that’s a better quality of competition.”

After laying the foundations last year, the Huddersfield fruits are being borne this term. Only a late Liam Marshall try denied the Giants a stunning Challenge Cup win over Wigan Warriors in May, and the Betfred Super League table sees them as the closest challengers to the top two.

“Our first ambition was to get to the playoffs and I think we are almost there,” he says. “I think we are in a better position than we were with Salford. When we first got to the play-offs with Salford it was like we had hit the Champions League and it was a different level, we couldn’t compete. That was a real eye opener.

“This group is different and I think we can handle it. We even handled the Challenge Cup final so I’m really confident we can have a tilt at the Grand Final. can we win it? I’d love to think we could but we still have a lot of development to do to get to where St Helens have consistently been.”

Watson was born and raised in Salford, where he ended up playing after coming through the juniors at Eccles, before spells at local clubs Swinton Lions, Rochdale Hornets, Oldham and Leigh Centurions amongst others. By his own admission Watson was an unspectacular player, something he feels has shaped his coaching philosophy.

“I wasn’t the most talented rugby player so I had to be smarter or fitter to outwit people and have a chance of succeeding. Sometimes I’m more comfortable when we have had a loss because it is about how you respond. What motivates me more than anything is the challenge, so if people label me as an underdog I quite like that, it suits my character.”

WATSON IS IN HIS SECOND SEASON WITH THE GIANTS

As a self-confessed rugby nerd, Watson was always going to be a coach. He would get his chance at Salford following the departure of Iestyn Harris in 2015. It was a time of huge transition for a traditionally cash-tight club under charismatic millionaire owner Marwan Koukash.

“When I came in Marwan was deciding where he wanted to go with his career, with his hotels, racehorses and the rugby club. He stepped away so it was about trying to water things down a bit from what we spent before and Marwan helped us gradually reduce what we were spending.

“A hard-working town needed a team built around hard-working people. I had to get really competitive players and leaders to lead the club like Mark Flanagan, Lee Mossop, Tyrone McCarthy – players who people wouldn’t think were the flashiest but who were important to Salford.”

Watson has installed similar rocks at Huddersfield, with veterans Chris Hill and Chris McQueen both reborn alongside their captain, former NRL prop Luke Yates, who followed Watson from Salford.

And on top of the rocks comes the sprinkling of stardust, in Watson’s case the leading Man of Steel contender Tui Lolohea. Like Yates, the Tonga international was snapped up by Salford and then taken to Huddersfield, having been rescued by Watson from a nightmare spell at Leeds Rhinos.

“I watched Tui playing for New Zealand Warriors when he was first coming through. He had natural footballing talent, he just needed to be nurtured in the right way and given confidence. When Leeds brought him across they didn’t fill him with confidence, they just said ‘right, here you go, go and win a title.’ Tui needed other people around him to let him do what he does best.

“He is special as a person and a player. I love everything about him. He found a place where he belonged at Salford and then Huddersfield. When you are happy you perform at your best. He just needs the environment to thrive, he has an aura and a presence, when he is playing all our players feel good and that gives him more confidence.” 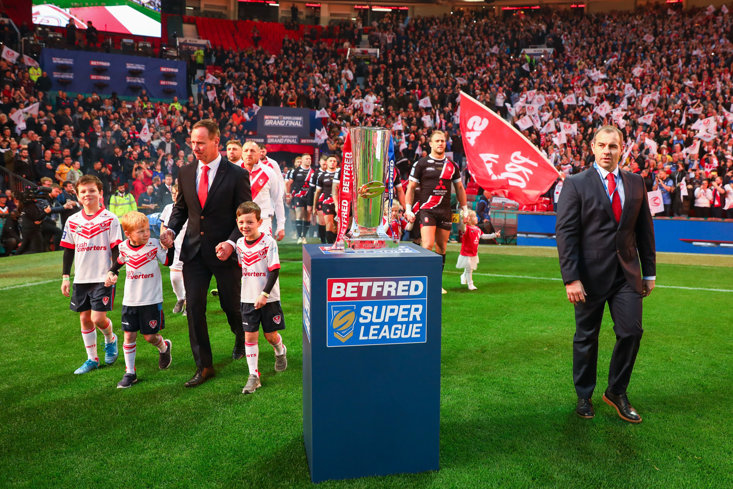 Watson has developed a knack for reigniting misfiring superstars. Jackson Hastings was another, marginalized in the NRL where he is now back thriving after benefiting from the Watson experience at Salford.

“He came across from Manly and had been pushed out as he was seen as the biggest problem. I just saw how competitive he was and when you are young that can get misunderstood as you come across quite arrogant.

“We were about rebuilding Jackson and getting him back to what he was doing best and then focusing on some of his off-field stuff.”

Watson believes the key to managing players like Lolohea and Hastings is to be an expert on your subject.

Guiding Salford to a Grand Final and Betfred Challenge Cup final in successive years saw Watson’s own stock rise and has prompted talk of his future again, with a move to the NRL a real possibility. Guiding Huddersfield to the cup final in his second season has further underlined his growing stature.

“While these are steps forward we haven’t actually done anything because we have not won. We need to win something to feel like we have achieved. My ambition coming to Huddersfield was to build a team and build a legacy, something you couldn’t do at Salford, where we were always just fixing the first team up.”

It feels something of a paradox that such a media-shy man would harbor such a strong desire to immerse himself in the media-hungry NRL, where the competition’s huge profile makes everyone a superstar. But professionally and personally that is Watson’s goal.

“I want to win as much as I can and one day to coach in the NRL. I want people to see that it’s not just Australia who are good at things. There are British coaches who are as good as what is over in Australia. Similar to what Mal Reilly did when he went across all those years ago and won a championship with Newcastle Knights. I’d love to do that to prove people wrong.

“I’m in no rush to get there. I want to make sure Huddersfield have created a legacy so when I do leave, the club is at the top end of the table competing to win things.”