SAM MONAGHAN TAKES a breath and pauses mid-answer, trying to gather her thoughts, and apologises with a laugh that she hasn’t had her morning coffee yet.

Sam Monaghan starred for Ireland in this year’s Six Nations.

You’d imagine it’s something that happens the Meath star quite a lot. It’s been a rollercoaster few years, her meteoric rise difficult to comprehend at times: from a real latecomer to the rugby scene to Women’s XV Players’ Player of the Year 2022, earning the slick nickname ‘Sammy Bill’ along the way, in reference to New Zealand’s legendary offload guru Sonny Bill Williams.

A really interesting story has unfolded in between, and what better time to take stock than just ahead of Ireland’s historic summer tour to Japan. It’s the morning of departure, and despite being on top of her head, Monaghan squeezes in a chat with The42.

“I’ll tell you a bit my background,” she enthuses when asked about the switch.

Monaghan originally moved to Brighton six years ago for a bit of a change. A friend lived there, she went over to visit one weekend and fell in love with the place.”Mam thought I’d be home on the Monday and here I am six years later,” she grins. “The rest is history.”

She decided to pick up rugby when she moved over, more socially than anything, having tried her hand at a wide array of sports back home. Gaelic football was the big one. She won an U16 All-Ireland minor title as Eamonn Murray’s goalkeeper and played alongside several of the Royal county’s current senior stars including Vikki Wall, Máire O’Shaughnessy and Monica McGuirk.

“I used to always get sent off in football because I was too rough,” she laughs, “but I had no interest in playing rugby because I didn’t understand the rules. I used to watch it because obviously Ireland had some great years. I didn’t really understand why they kicked the ball away that easily!

Working in a bar, it was tough at times, but she caught they eye and started to climb up the rugby ranks. Playing at J2 level, she landed a training session opportunity at Richmond, but then the Covid-19 pandemic hit and she was stopped in her tracks. With a taste of it all, she wanted more. Instagram searches of players made her realize the professional lifestyle they lived, and Monaghan wanted in. 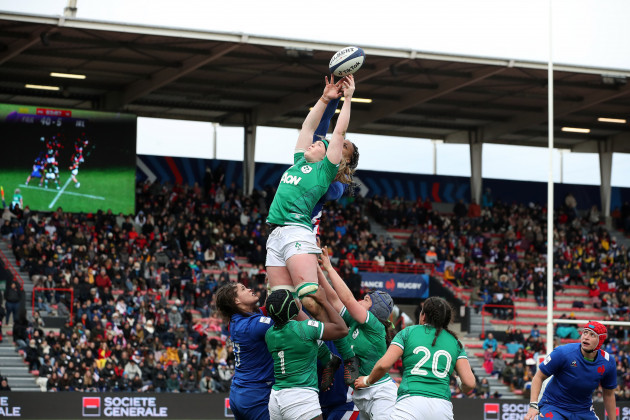 Monaghan stars in the line out now.

Her coach helped her secure a trial at Wasps, she impressed at a few training sessions and her potential was spotted. “I was very raw, I couldn’t jump in the line-out, I never did before because I used to always be a crash wall.”

A rough diamond, her rise continued, and Wasps team-mate Cliodhna Moloney put her in contact with the Ireland set-up, headed up by Adam Griggs at the time, just before the Rugby World Cup 2021 Europe qualifiers in Parma. More on that later.

Back in England, Monaghan sampled “a full-time environment without being full-time,” balancing her rugby and two-hour train commutes to and from Wasps, with work. It all took its toll on the body, and ultimately led to the switch to Gloucester, she explains.

“I was kind of going into this year, being like, ‘God, I don’t think I could do that again. The next few years are really important, I need to find a club and train full-time, just get a part-time job…’ I luckily got a few offers.

“I had been talking to Gloucester, I didn’t want to leave Wasps — I love the culture there and it was a great team. Obviously London’s quite expensive as well but I wanted to try a new experience, because I’d only ever played with one team, with Wasps. I kind of needed a clear slate after the couple of years we had, not qualifying [for the World Cup] and stuff, and just felt like it was time for a change for me personally. I just wanted a fresh start really.

“I got to train with Gloucester and really enjoyed the set-up and how they run things. I really, really liked it.”

She’s in the middle of trying to move up there at the minute, a hectic time spent in limbo as she heads for Japan with her belongs scattered around the place and her job in Brighton to be tied up. She manages two bars there, admittedly “full-on” but enjoyable.

“It’s good, it’s exciting, I’m so lucky to have so much going on and thankfully my work kept me on until the middle of September so it’ll keep me going for a while, and then I’ll move to Gloucester full -time.”

Immersing herself in rugby is something she’s relishing, with cautious optimism around the IRFU’s new player contracts. It’s needed, she nods, explaining how she came into Ireland camp off the back of a “mental” 15-hour shift amidst Brighton Pride, while team-mate Emma Hooban, who works nights as a nurse, is another prime example.

“It’s getting to the stage now where you’re like, ‘This isn’t sustainable anymore.’ You can’t be coming in expecting to perform at the top level absolutely wrecked. On your downtime, you’re trying to watch analysis but you have to do other work — rotas, ordering, I have to do that in Japan. It’s fine, but you just feel like you’re spreading yourself too thin. You could give so much more.

“There’s a lot of young players here – I’d love to be able to sit down with them more and go through analysis and kind of put my arm around them but I actually just haven’t had a chance over the last couple of weeks . That’s what I’m really looking forward to when I can just go in and give it my full attention. I feel like I have a lot more to give.”

She looks to her former Meath team for inspiration at times, the Royals storming to the top of the ladies football tree with back-to-back All-Ireland senior title wins after an incredible rebuild.

Memories of that U16 All-Ireland final win over Donegal come flooding back — the 13 minutes extra time: “I think my poor mother was about to have a heart attack!” — along with a landmark meeting she attended in 2016 or ’17 to decide whether the adult team would drop to intermediate or remain senior.

“I always think about that and you’re just like, ‘Wow, that’s amazing.’ I think we made the right decision and the way they come up: lost two intermediate finals, won one and then won two All-Irelands, that’s unheard of. It just shows the passion they have, what a great coach Eamonn is, what a group of players they are.

“They’re just phenomenal athletes. I would actually be really inerested just to see their GPS stats, the amount work they do is phenomenal.

“They’re honestly an inspiration to all sports, not just Gaelic football. Any sports.” 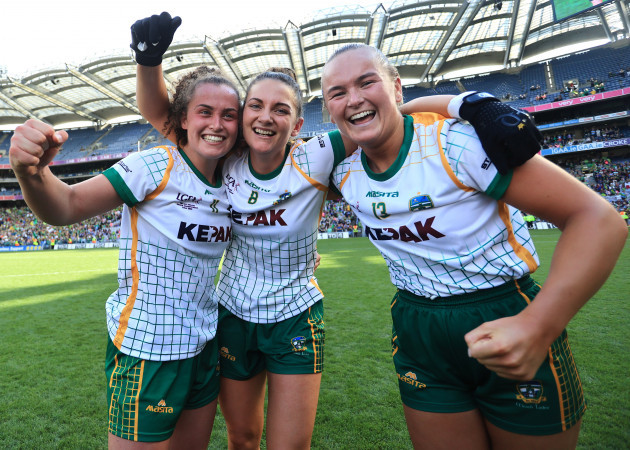 “That will be such an amazing experience to go and play AFL. It’s something I’d want to do maybe after the next World Cup — ah, I don’t think I’d ever be fit enough to play AFL to be honest!

“It’s just such a cool experience for her. The doors sport open for women, it’s getting better and better and it’s really exciting for all these athletes.”

No more than for herself and the Irish rugby team, enjoying this new chapter after the failed World Cup qualification bid and well-documented off-field issues. There’s a palpable sense of excitement, a real buzz in camp as a new bunch of players gel together for the next cycle, the rebuild beginning through a difficult Six Nations campaign.

Get closer to the stories that matter with exclusive analysis, insight and debate in The42 Membership

New coaching additions John McKee and Dennis Fogarty are exciting to work with, Monaghan enthuses, while having the services of renowned referee Joy Neville in camp in Dublin to focus on lowering the penalty count in future was a major boost.

“A massive hero for all of us,” she beams, “She has so much knowledge, we all just sat there and hung on to every word she said. Her insight to the game is obviously one of the best, having her at training was absolutely amazing and we’ve learned a lot.”

From Parma onwards, she notes.

Though that rock bottom feeling is still very difficult to shift.

“A lot of us are still very hurt, with the World Cup just around the corner. We still wake up every morning to think, ‘God, we could be going to New Zealand’. A lot of us players carry that pain with us, and we will do for the next three years. 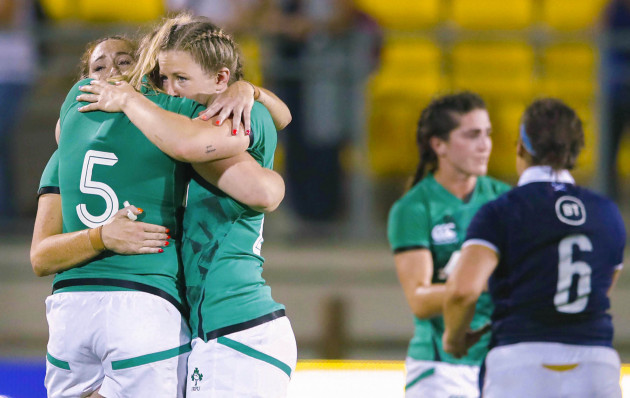 Dejection in Parma after that gut-wrenching defeat to Scotland.

No better woman. A powerful note to finish on.

As the conversation winds down, Monaghan says sorry, again with a laugh, for waffling at times. Absolutely no fear of that.

“Once I regathered my train of thought and got into it, I was fine but I probably should have had a coffee before this, I apologise!”

Her brilliant story and remarkable rise is complimented once more, and she offers the perfect reminder of how quick it’s been as we part ways.

“I was even thinking in bed this morning, this time last year, I didn’t even have a cap, was never in training with the Ireland girls, and now I’m going to get my 10th cap hopefully.

“The year it’s been, it’s been really tough, there’s been a lot of learnings and it’s definitely made me a better player. You learn from your mistakes. But I’m really grateful to be here and be involved with this squad and hopefully the next few years will be really successful for us.”

With Sam Monaghan to the fore, there’s absolutely no doubt about that.